July 15, 2020
As we quickly approached the middle of the month I guessed that it was about time to start thinking about putting the Golf up for grabs! I wonder if a month with each car is actually long enough as just lately I feel that I've only just begun to experience the car, then it's time to move it on. Anyhoo, before I do, I'm going to need some pretty pictures of it for my own records.
Sadly this is my third attempt at getting some half decent shots of the Golf. The first time I failed because before I had got to the chosen location it decided to widdle it down with rain, which isn't ideal for photographing a convertible car with the roof down. However all was not lost because it did give me the opportunity to be able to tell you that even when it's really hammering down with rain, and you're travelling at motorway speeds to roof doesn't let any water in, and it's even still fairly quiet. 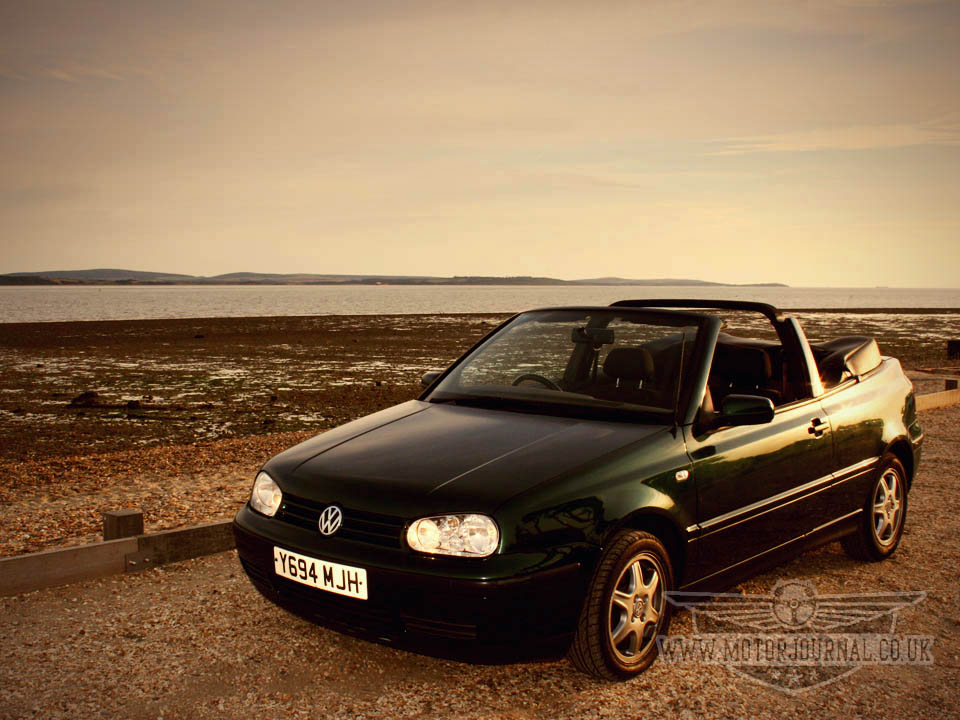 The second time was a complete failiure caused by me. Again, headed out DSLR in hand to take photos of the Golf, arrived at location, sun beating down, everything was looking good. Took loads of photos, got home to download them from my camera. Looked at my desk and thought, thats odd, what's that Compact Flash card doing there, looked in camera... DOH!!! So annoyed, if I wasn't bald already I'd have torn my hair out! Still, third time lucky as they say.
As it was a fairly warm evening and I decided that the previous chosen location just wasn't ever going to work for me I decided to head for the Beach. This pleased my littlest Monster who wanted to go and collect some stones from the beach, and my biggest Monster who just wants to splash about in the sea no matter what the weather is doing was pretty happy too. So, I checked that my camera actually had its memory card in it this time, got Mrs Clint and our two little Monsters into the car, dropped the roof down, and we were off to the beach.
The drive down to the beach was pretty uneventful, and the Golf just purred along. We had the roof down all the way there and out on the motorway it was quite blustery, however I've always wondered why when you see people driving their convertibles do they have the roof down, but the windows rolled up? Well folks, after being blown harder than Hugh Grant in a public toilet by an LA hooker, I decided to roll the windows up too. This probably cut the wind noise and blusteryness in half, and made for a far more enjoyable ride on the motorway. Pretty soon we arrived at Lepe beach, and I figured that as my Beach Bum children would be occupied with the beach, I left them and Mrs Clint to it in the hope that I should be able to get some nice photos of my Golf. 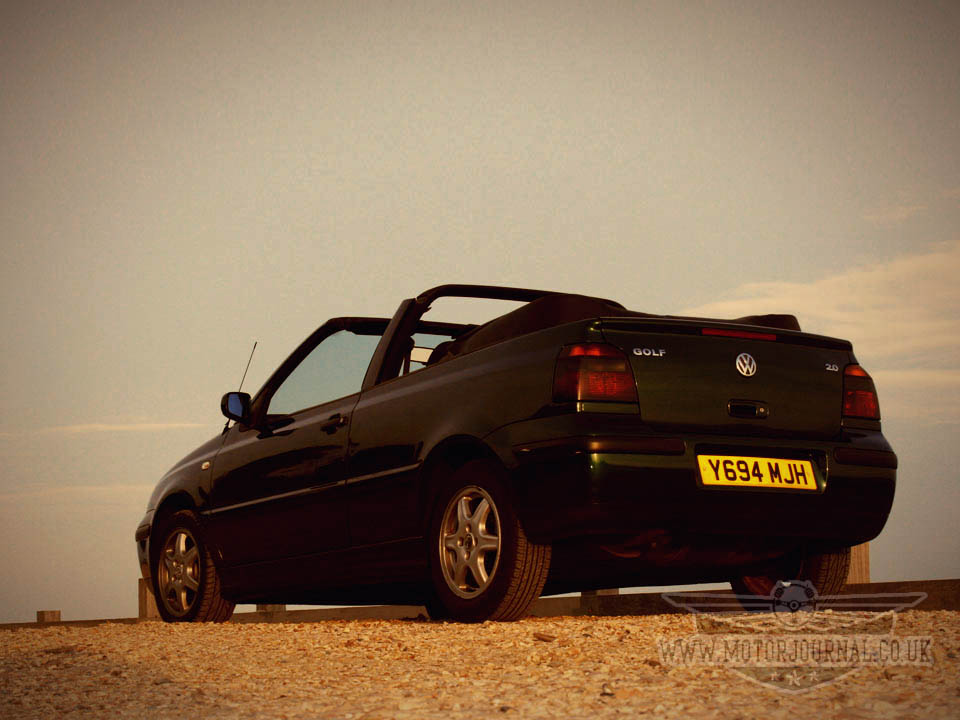 After I had taken my photos,  my little Beach Bums had done their thing on the beach, and the big orange orb was starting to dip below the horizon it was time to head for home. I left the roof down telling the girls that as it was the summer, and dry, it would therefore be roof down time... This didn't last long, to be fair it was getting pretty chilly, but in the front with the heater on me and Mrs Clint were both OK, but our two little Monsters were getting really cold, although not so cold that it stopped the eldest Monster from hopping out of the car and running across the road to photograph a Capri parked in the carpark while I was filling up with go-go juice!
But once back out on the road the girls were complaining of the cold again. So before reaching the motorway I stopped, and less that 20 seconds later the roof was all back up at the touch of a button. The only downside to this is that if you want to lower, or raise the roof, you actually have to stop, and turn off the ignition before the button to work the roof will work. I'm guessing that this is probably to stop idiots from raising or lowering the roof while they're blasting along the motorway or something. But like I said, it can be raised and lowered very quickly, and infact I've even managed it while waiting for the traffic lights to change!
With the roof up I've got to say that personally I quite like the green roof on my little cabriolet, because since I've owned this car all the other Golf cabriolets that I've seen have all just had a black roofs with the exception of one blue cabriolet which had a matching blue roof. I wonder if the coloured roof was an option, or rare in anyway, or have I just not been that observant? 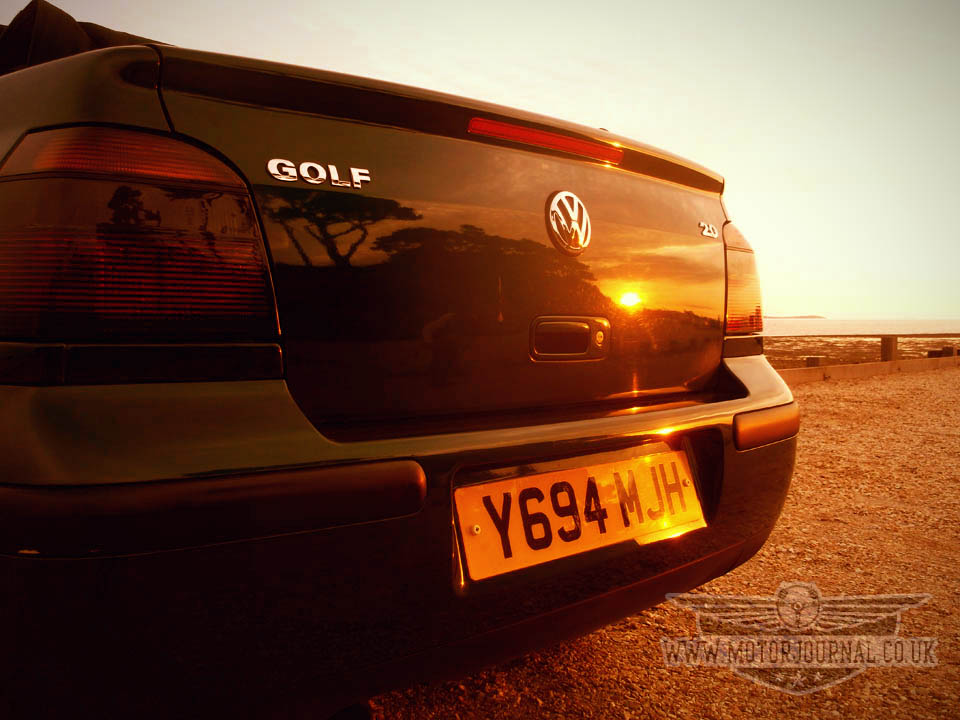 Anyway, back on the motorway with the roof up this is a very quiet car, and infact I honestly doubt that it could be any quieter if it was a tin-top car. The problem is though, that with the roof up, as warm and quiet as the Golf is, something is lost. It goes from being quite a fun car to something that although quite good, is also quite bland. My feeling is that the Golf is probably better in almost every way than the StreetKa, but the StreetKa still feels interesting to drive even when the roof is up. However, it does have to be said that I cannot get my little family in the StreetKa due to it only having half the amount of the seats that the Golf has, so maybe the Golf should really be the true victor in the comparrison? I dunno, I guess I'll have to give it a bit more thought, but if I'm honest I would have to say that I am leaning more towards the StreetKa for a little bit of fun in the Sun than I am towards the Golf!