June 17, 2020
As much as I am enjoying the little Citroën AX, I can't help feeling that it's just a little bit ordinary looking. It's tidy enough, and probably on a normal day I'd think I was happy with its looks, infact, I am happy with it's looks, but frankly, I need more! 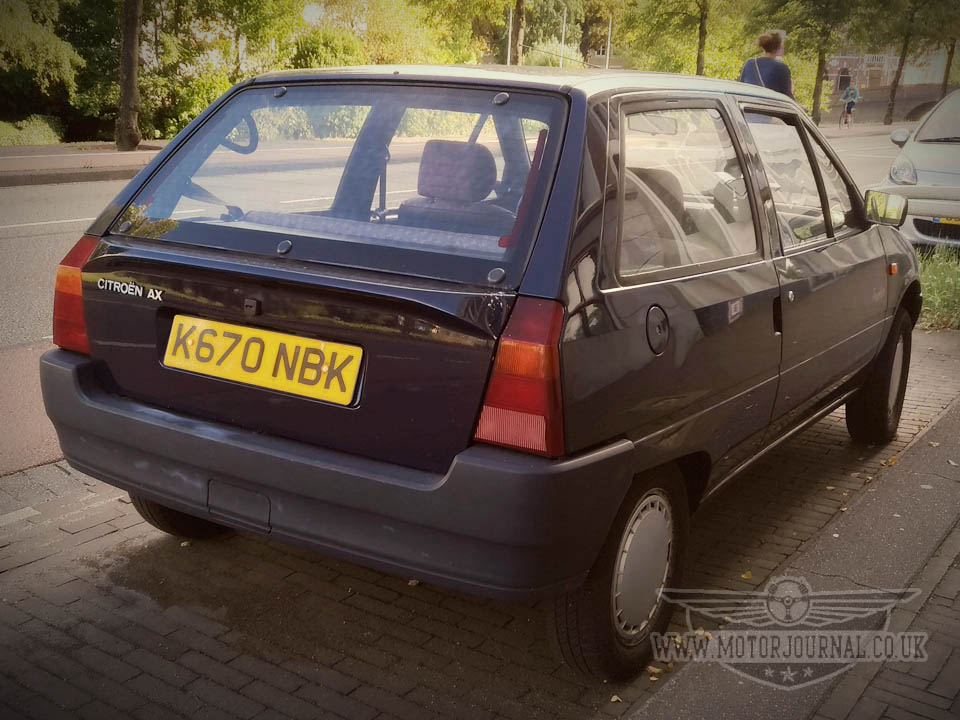 I don't know if it's because I was having so much fun in the StreetKa, or a thread that I was reading on the Retro Rides forum, but I felt like the little AX could do with a bit of pizazz! Looking at the cars that had been posted in the Retro Rides thread planted the seed in my tiny little mind, then seeing this plane at a museum made the seed flourish! 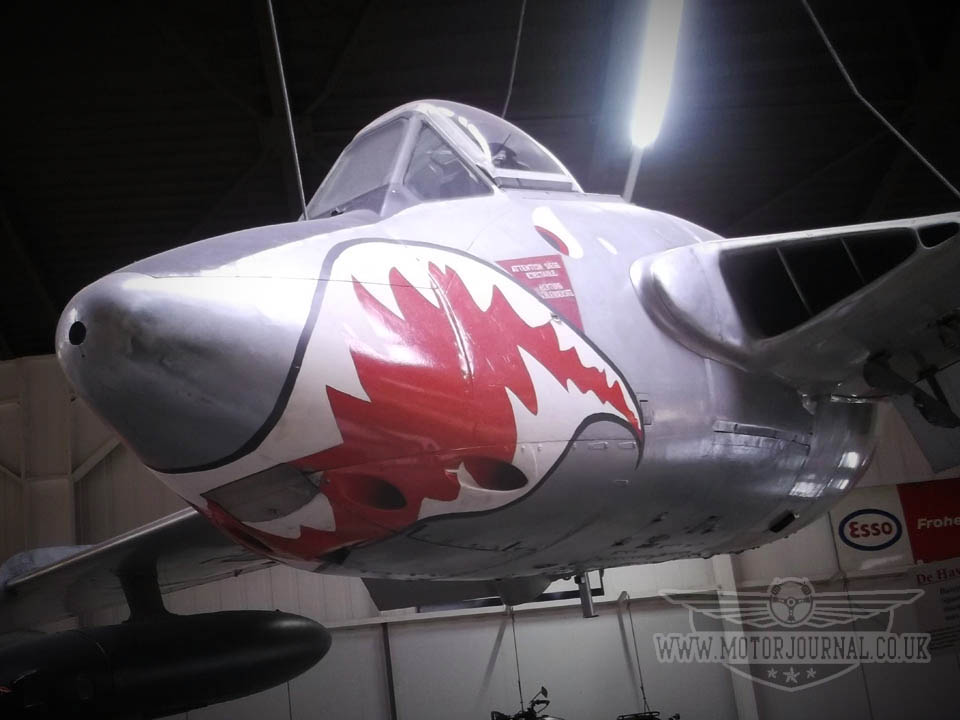 I knew what I wanted to do to add that little bit of pizazz to my little Citroën. Once home from the museum I was straight on the bay of E looking for some shark mouth graphics for the side of my car! Before too long I had clicked Buy It Now, and a set of graphics were on their way! Get ready to put your head in your hands! 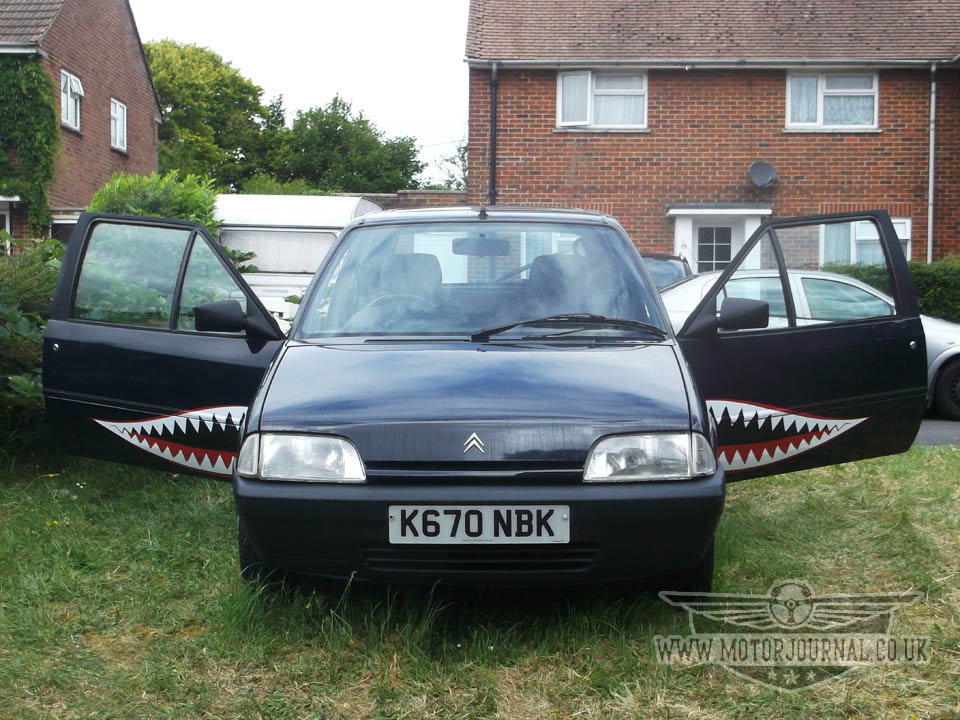 Now, it's been a while since I've added any sort of graphic to my car, but I used to be fairly good at this sort of thing once upon a time, and always got the job of putting the company signs on the side of the vans at work, but like I said, this was a while ago now. The graphics showed up within a couple of days, and straight away I knew this was not going to be as easy as putting the signs on the vans at work. When I did them, they were a large clear vinyl sticker with the company logo and other details printed on them. These were three different stickers, a black layer, a red layer, and a white layer which all needed to be laid down and lined up with one another one layer at a time!

I thought this might be a major faff to do, I could see it all going wrong realy quickly, especially as I'd be trying to do it outside, and one little gust of wind would ruin the whole thing! I enlisted the reluctant help of Mrs Clint who, upon seeing my stickers just looked at me and said, what are you doing now you idiot! I'm sure she was into it really! Anyway I put the car in a fairly sheltered location on my brothers lawn, and hoping for no gusts of wind atleast until I was done we went for it. I wiped the side down with methylated spirit, and then thoroughly soaked the side of the AX with a weak detergent solution sprayed from a cheap plant sprayer purchased especially for the job from poundland. With that done, we put the black layer of the mouth on the bonnet, and peeled away it's backing. While Mrs Clint held it down I then gave that a good soaking too. We then applied it to the side of the AX and moved it into where I thought it should be before going over the whole thing with a squeegee to remove any water that was trapped beneath the piece of vinyl. With that done we moved onto the other side and repeated the process. With the black layer done the process was repeated for the red layer. Despite their size both the black and the red layer went on relatively easily, in fairness, if I was feeling a little more confident I may well have been able to have done them ony own. But then came the white layer, and this was really the biggest faff of the whole job. We repeated the same process as the black and red layers, but the problem was that the white layer was more like a string of bunting, and even though there was next to no breeze it still flapped around wildly! I really needed the assistance of Mrs Clint here, and infact, had my Brother been at home I would've got him to lend us a hand too! After carefully getting it on the side of the AX I even more carefully than before started to squeegee the water out from underneath it. Being so small the first time I did it the damn teeth moved, and we ended up carefully trying to pull it back off and re-apply it. It really was a pain in the bottom, and it was pretty soon obvious that what we needed to do was to hold each tooth, and carefully squeegee the water out from them one at a time. Laying down the white layer took us longer than putting both the black and the red layer togetether. But we got there in the end! The eyes, being much smaller were a doddle, and I just stuck them on as you would a normal sticker. After about four hours we had it all done, and stood back to admire our handiwork. Mrs Clint still wasn't impressed, however, upon showing it to our two little Monsters the response was far more like the response I was hoping for. 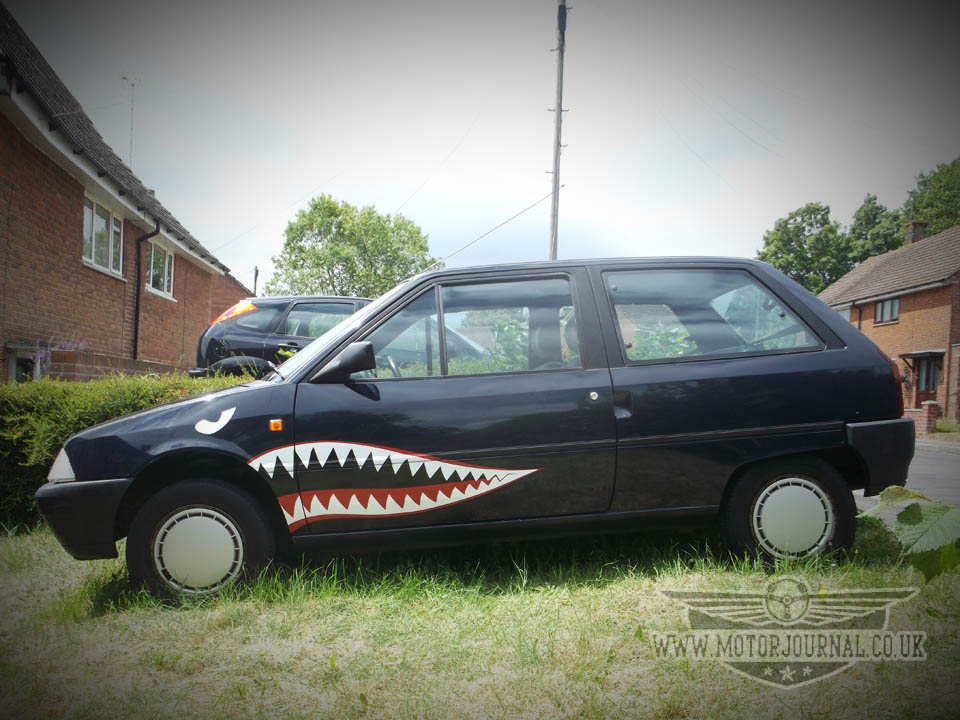 They both looked at it and just said, thats Bad Ass Dad!! Maybe they need to watch Fast and Loud a little less, but I got the idea of that they were trying to say, and to be honest, I couldn't agree more!