June 09, 2020
With the HotRod all in one colour I was thinking that I was getting pretty close to being out there in it! But as close as we were getting, I was pretty much tired of it all. I think that the problem was not so much the HotRod its self, but life was getting on top of me. I was flat out at work, but worse than that, the site I was working on was a good couple of hours drive from home, so I was doing almost half a working day getting to site and back each day. 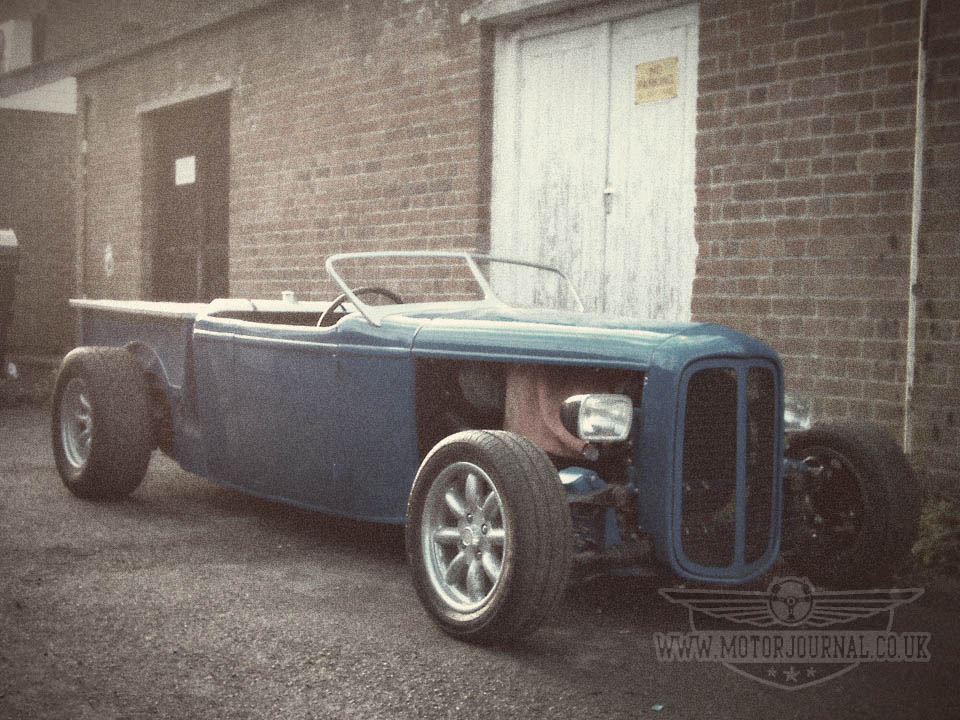 But I think that what was making matters even worse was that at the time I had this Yo-Yo girlfriend who kept coming into my life, then as soon as she had her claws into me, promptly left again! Only to come back once I was starting to get over her. This little scenario had already been going on for six months at this point, and would continue to play out for nearly another three years! These two facts, combined with the pressure I was putting on myself to work on the HotRod every day was really starting to drain me. M.R. kept saying to me, c'mon mate, we're nearly there, just look at the list of jobs left to do... 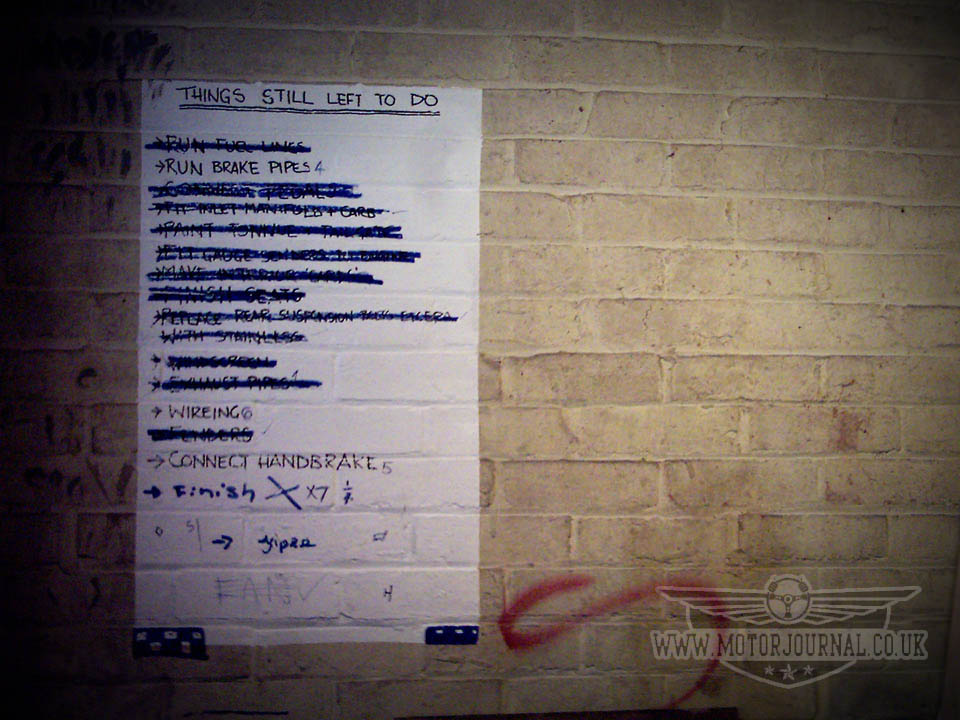 He was right, we were really getting close, but close as we were, I was drained, both physically, and mentally. My workload, Yo-Yo girlfriend, and almost endless sleepless nights were really taking their toll.
Despite being a pipe fitter by trade, one job I really wasn't interested in was plumbing the brake lines. I talked about this with both M.R. and M.C. and they both thought it was crazy as it should be a walk in the park for me as it's what I did, just on a far far smaller scale. I agreed with what they were saying, but I was stuck in a rut. So M.C., who I might add was already struggling with his own budget HotRod build stepped up and offered to do it for me. I realise that my friends carried me a fair bit during the build of this thing, but at this point in time, they were really carrying me! 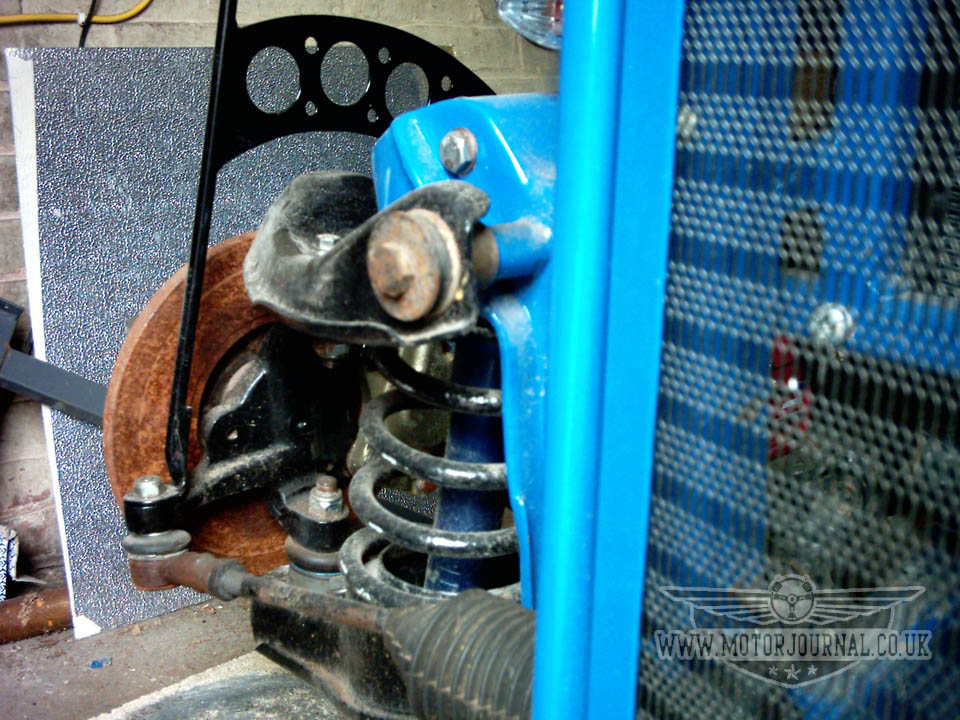 I had all the components in place, brand new brake discs and drums, than now had a bit of a crusty layer of rust on them due to the amount of time from initial installation, to the point we were at then. Also a refurbished brake master cylinder and servo from a Cortina. It was all there, just needed to add the pipework, but I just couldn't face it. 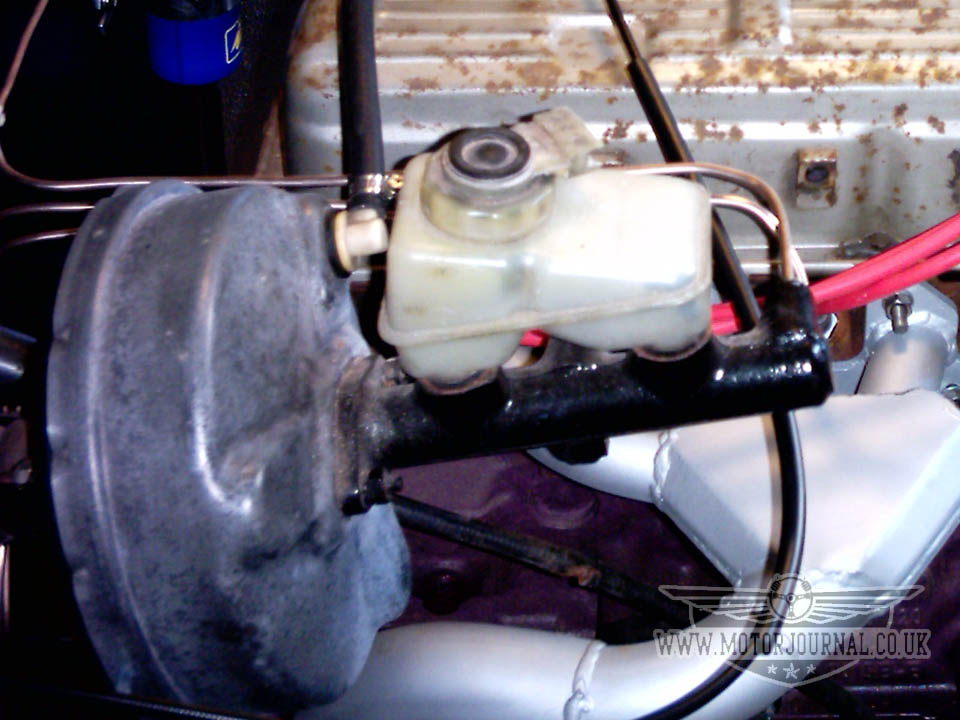 I got all the brake lines, and fittings, got my small bore pipe bender and brake pipe flaring kit, gave it all to M.C., and left him to it. By the end of the day it was all done, and M.C. had made a splendid job of plumbing it all in. 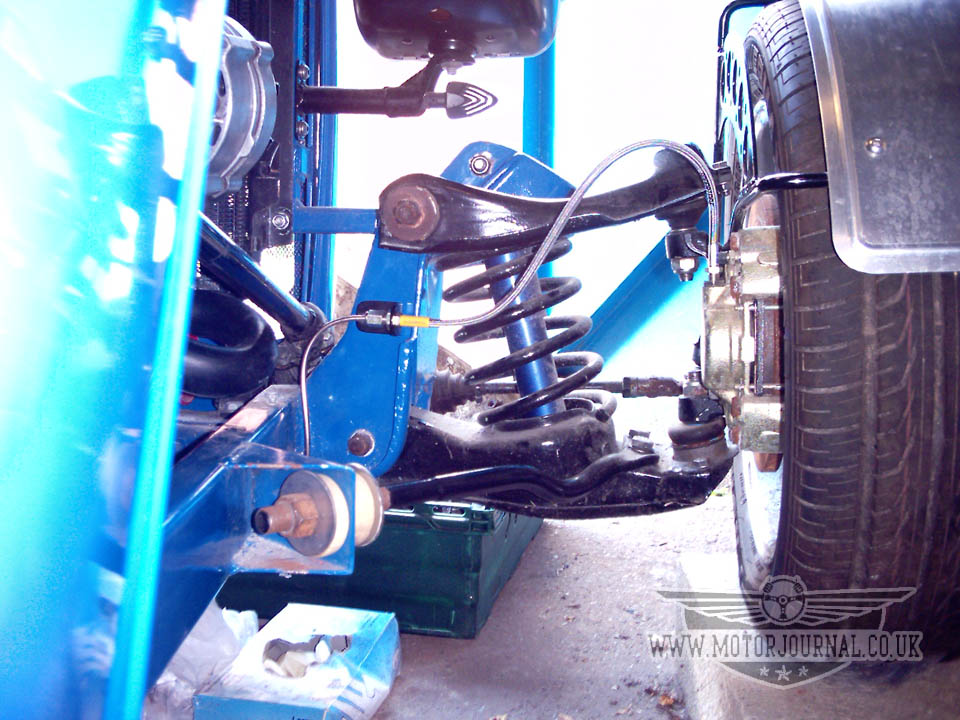 While M.C. was busy plumbing in the brake lines, M.R. was making the little brackets to hold things like the flexible connectors on to the chassis, and give a solid place for the hard lines to connect with the flexible hoses. He also was running tiny pipe brackets throughout the HotRod ready for the brake pipes to be clipped into by M.C. 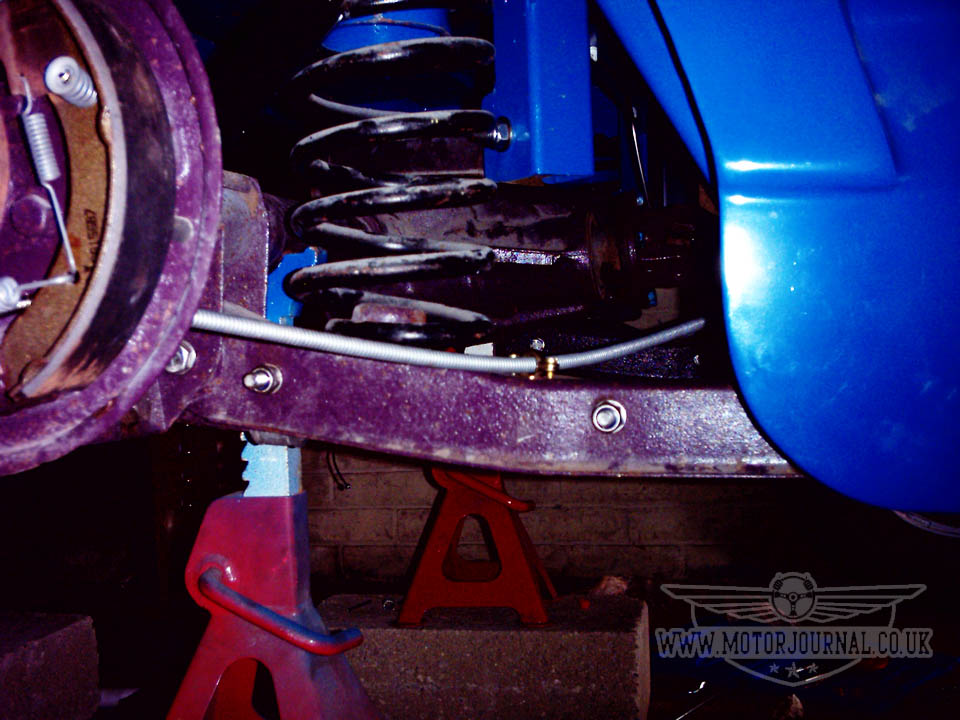 It was a real team effort that day, and despite the three of us all working in a tiny council garage, none of us really got under each others feet, despite us all working on essentially the same thing, the brakes.
With M.C. and M.R. working on the hydraulic side of things, I was trying to fit the handbrake cable to the rear drums. I had already attempted this before, however the first time the handbrake cable was too long. This was because I couldn't get a MK1 Escort handbrake cable, and so, as it had a Cortina back axle I bought a Cortina handbrake cable. After getting it all in there and realising that it was too long, I  measured the length of it, and had it shortened by the appropriate amount. This time, thankfully it was a perfect fit. Although it still nearly took me as long to fit the handbrake cable as it did for my two friends to fit the brake pipes which was a far bigger job. 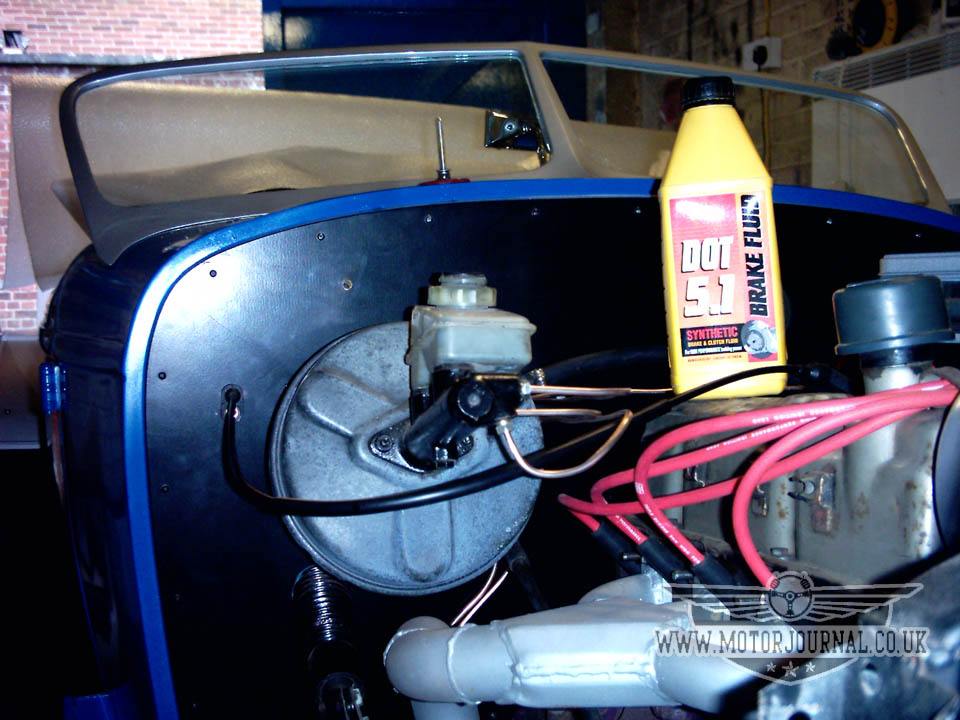 By the end of the day the handbrake was in, and the brake pipes were run and connected. In short, it was ready to fill up with brake fluid! We filled it up, and bled the brakes until the pedal felt firm, then closed the door and left for the evening. Finally the brakes were done, and I was another step closer to my mad march to the road. Or so I thought. 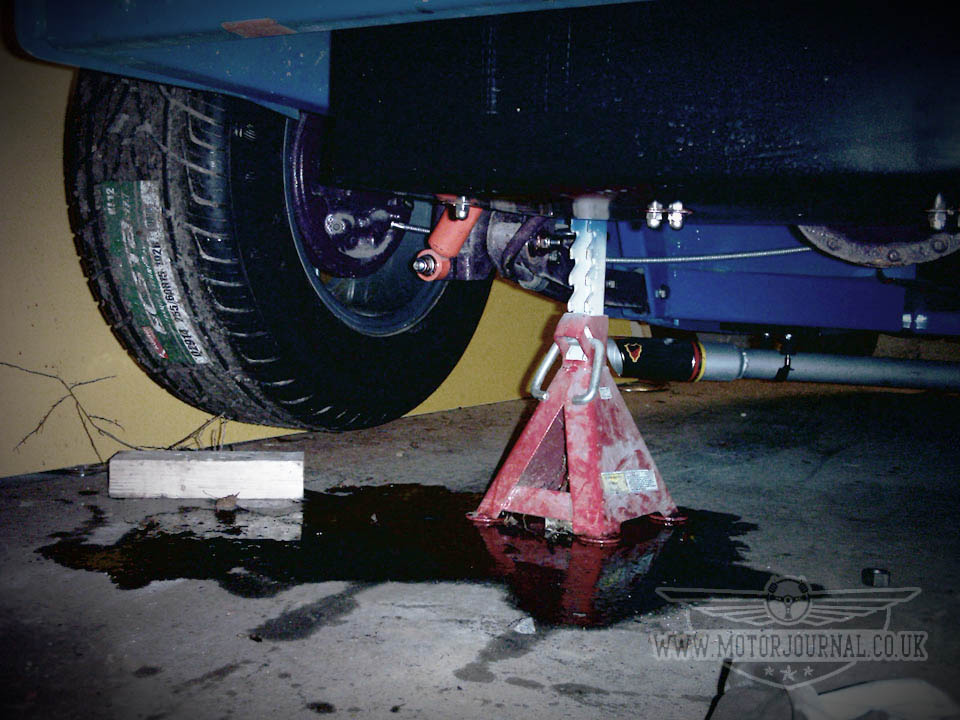 Arriving in the garage the following day I was greeted by a big puddle of brake fluid on the floor under the back axle. This, as I'm sure you can imagine cheered me up no end! I crawled under the back of the HotRod and soon diagnosed the problem, my brake pipes had a leak! Actually, it wasn't the brake pipes at all, but what it was, was a brand new tee piece which connects the brake pipes that supply the two rear drums, to the brake pipe that goes to the master cylinder had somehow cracked and split during the night. This irritated me, but I consoled myself by thinking that atleast it didn't happened while I was out and about on the road with it. I removed the faulty part, and returned it to the motor factors I had bought it from, who told me that they'd never seen that happen before. But then exchanged it for a new one. Back at the garage, and with the new tee piece carefully installed we once again bled the brakes until the brake pedal felt firm before calling it a day. This time there were no problems, the brakes were all done, and the HotRod was getting ever closer to being on the road. Another couple of jobs crossed off the list.