May 26, 2020
After a weekend of mindlessly blezzing around in the StreetKa trying to keep my tiny mind busy it was finally time to go to the hospital to get the results of the biopsy. Mrs Clint had decided tha she would attend with me incase I needed some sort of support. As for me, well I wasn't really sure what I needed as I got into the StreetKa. As I pulled out onto the street Mrs Clint asked if I was putting the roof down today? It was a gloriously sunny day, but you know what, I just didn't feel like it. 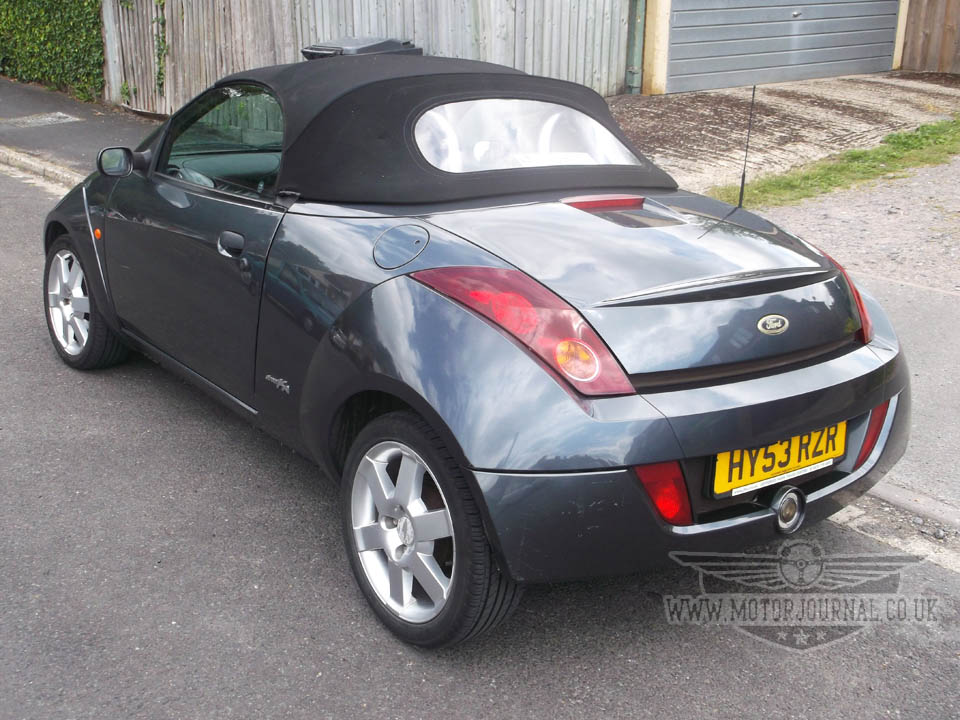 The drive there was a pretty quiet one, I barely spoke, Mrs Clint barely spoke, I didn't even have the Miami Vice CD playing. Just like I was at the beginning of all this, once again I was quite worried. Much like the Jaguar X-type the StreetKa also seems to have been fitted with some sort of autopilot mechanism, and before long I was pulling into the hospital car park. Before too long we had checked in to the clinic, and were waiting to be called. I'm sure we didn't wait long, but it felt like forever to me, however when I was finally called I really didn't want to go in. Mrs Clint got up, but I said that I would go in on my own, she sat back down and I went into the Doctors office. It was a different Doctor to the one that I had seen originally, but she had a good look around my mouth and throat before telling me that it all looked OK, apart from I now had an infection. I can't tell you how relieved I was, but I had to be sure, so I said to the Doctor what was it? She looked at the notes and said, nothing, just Lymphatic tissue. I looked at her and said, so, not ca..? I didn't even get a chance to finish before she said, no, not cancer, just Lymphatic tissue, you'll be fine. I felt a wave of relief wash over me, all that stress, all that worry, and I was fine! I headed back to the waiting room to tell Mrs Clint the good news.

When I arrived at the waiting room she was the only one left in there, she asked me how it went? I said that apparently it was all OK, and it was just Lymphatic tissue, and nothing serious. She looked as relieved as I felt! She asked me how I felt, I said that for the first time in a long time I actually felt pretty good, relaxed even. Then the receptionist chirped in and said, "You should think yourself lucky that you were one of the lucky ones today, not everyone who came here got the good news!" Wow! Way to take the wind out of my sails! But I guess she was right. Anyway, I didn't really have a response to that, and so we left, almost feeling like I had got a flea in my ear for being lucky enough to be OK.

Outside in the carpark we got into the StreetKa and Mrs Clint asked if we could have the roof down now? Yes we can, I said, and unclipped the front of the roof and started to put it down. We sat there for a while, it's funny, all this time I've been driving the StreetKa I really haven't noticed just how basic this little machine is. I mean, mine does have the leather interior but thats about it even though the documents proudly proclaim that it's a Ford Street Ka, LUXURY. and the luxury bit is actually in upper case text! So heres a couple of pictures of my luxurious interior. 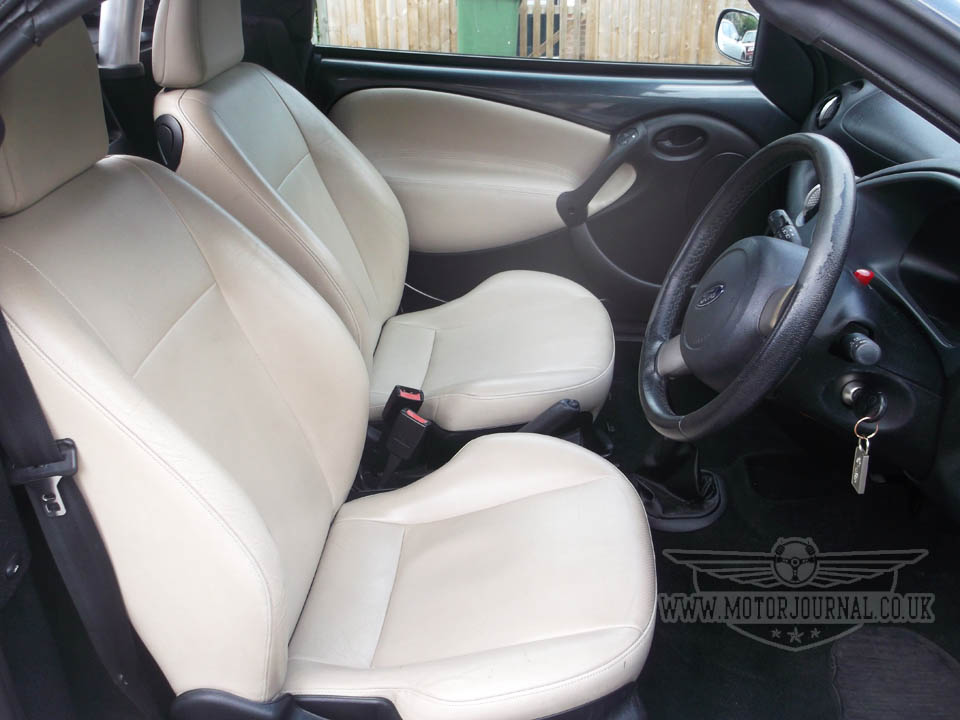 Now, in my opinion whoever decided that this was luxury had obviously never had anything luxurious in their life, and was probably driving a mk2 Escort, and in comparison, this IS luxurious against a mk2 Escort. But put it against literally anything created this century, luxurious it is not. 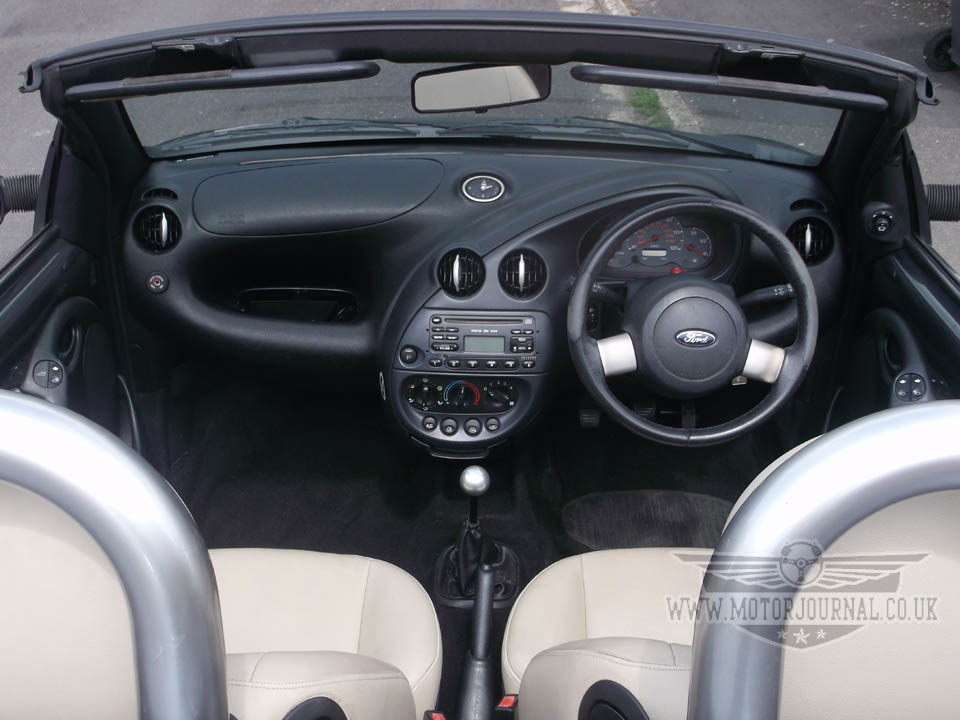 Thats not to say it's bad, it isn't bad at all, I mean I've got a chunky steering wheel, CD player, electric windows, comfy leather seats, leather inserts on the doors, and even a rather natty aluminium gear knob! But, this is all pretty much standard equipment on any car produced this century. Being a luxury model at the very least I should be able to raise and lower the roof at the touch of a button, and not have to stop the car, get out, and do it manually. Although that being said, it's really not that hard, and I've now got to a point with it that I can raise and lower the roof without even getting out of the driving seat! Mind you, to be honest, luxury is not what this car is about. Nobody in their right mind goes out and buys a Ka in the thought that it's going to be a luxurious car, Nobody! I think that the StreetKa is about an almost raw driving experience, blasting along the road with the roof down and the wind in your hair (Or if you're like me, the wind in your scalp!) It's a fun car, not a comfortable, cosseting, luxurious cruiser. But it makes me smile almost every time I go and get in it, especially when I open the door and see this... 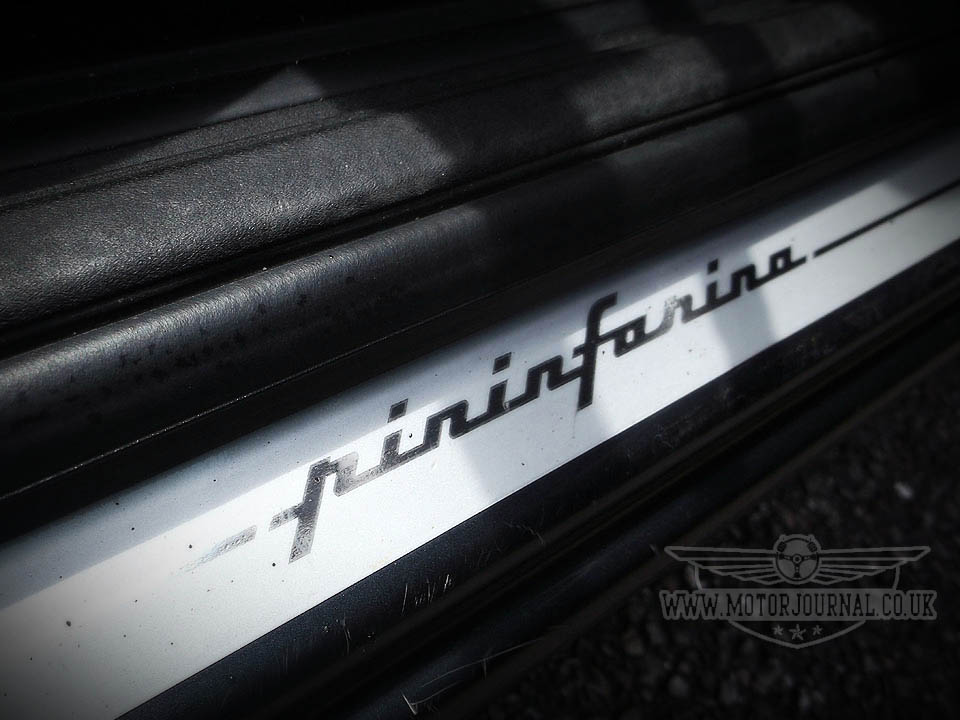 Oh yeah, styled my Pininfarina, the company founded by Battista “Pinin” Farina in Cambiano, a Province of Turin, Italy on May 22nd 1930 to design and build special car bodies for individual customers or in small production runs. Nearly 80 years on, they then styled the Street Ka... AWESOME!! The thing is, I realise that Pininfarina have styled many cars for various manufacturers, and the Steet Ka I think is a handsome car, especially when you put it against other Pininfarina styled cars of recent times, like the Hyundai Matrix produced from about 2001 to 2007 I think, a car that in my opinion is not very attractive at all. But it obviously full filled the brief that Pininfarina was given by the Korean car manufacturing giant. However for me, and I'm probably going to show my age here, when I think of a car styled by Pininfarina, I think of this. 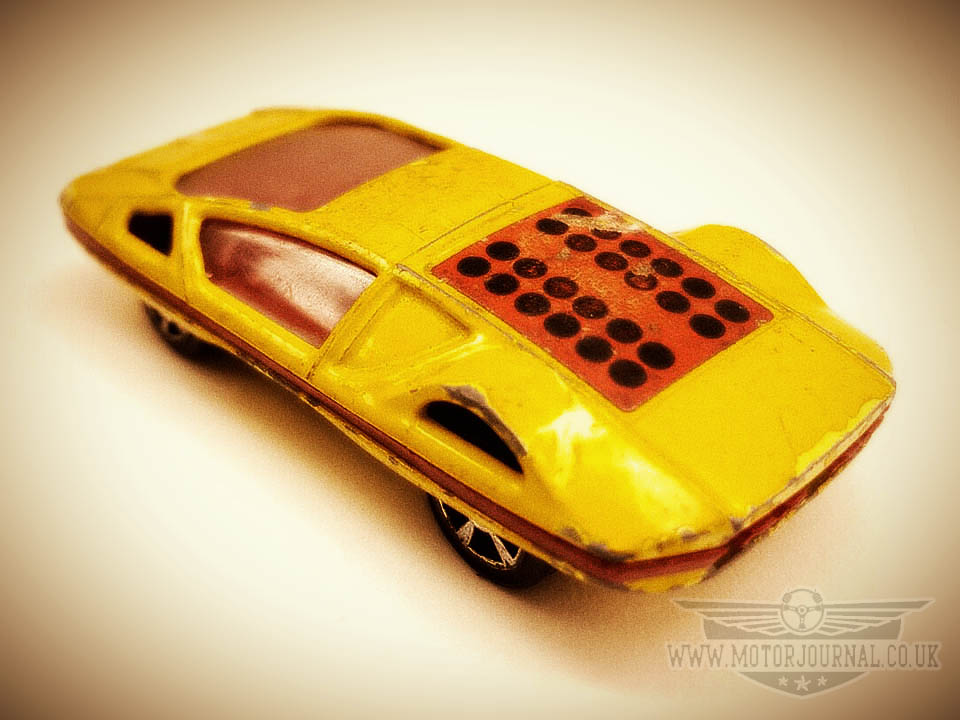 The Modulo styled by Pininfarina for Ferrari in 1970. This one obviously being a Corgi Whizzwheels toy, that I dug out from my two little Monsters massive toy car collection. But thats the car that I think of, it's the car that was ingrained into my psyche in the seventies when I was just a child, and it will always be THE car styled by Pininfarina for me, and everything else is just it's poor backwoods relation.

But no matter even if the StreetKa is the poor backwoods relation, roof up, or roof down, It's a very nice looking car, and more importantly, it's an absolute hoot to drive! It's also worth remembering that when the Street Ka was launched in 2002 at the Paris Motorshow it was the diminutive antipodean Kylie Minogue who did the unveiling. And if it's good enought for Kylie, then it's good enough for me! 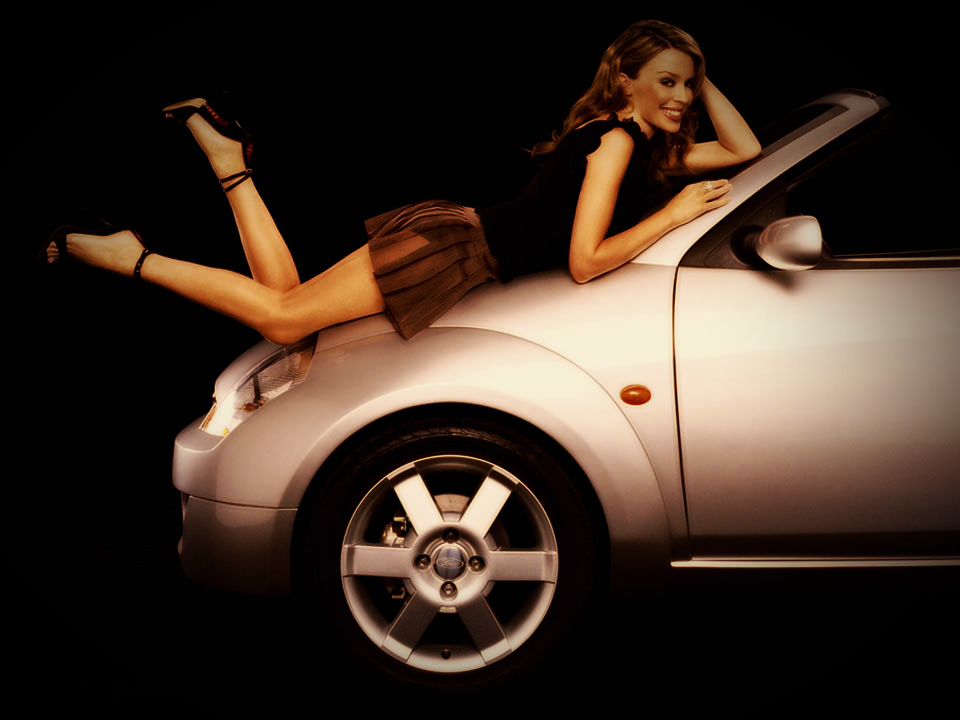 Anyway, Mrs Clint and I headed out of the carpark and off to get some tea. As we were in Southampton anyway I said that we'd stop and get something to eat, then if it was cool with her we'd eat at the beach. Before long we were tucking into our little picnic down at the beach at Lepe. 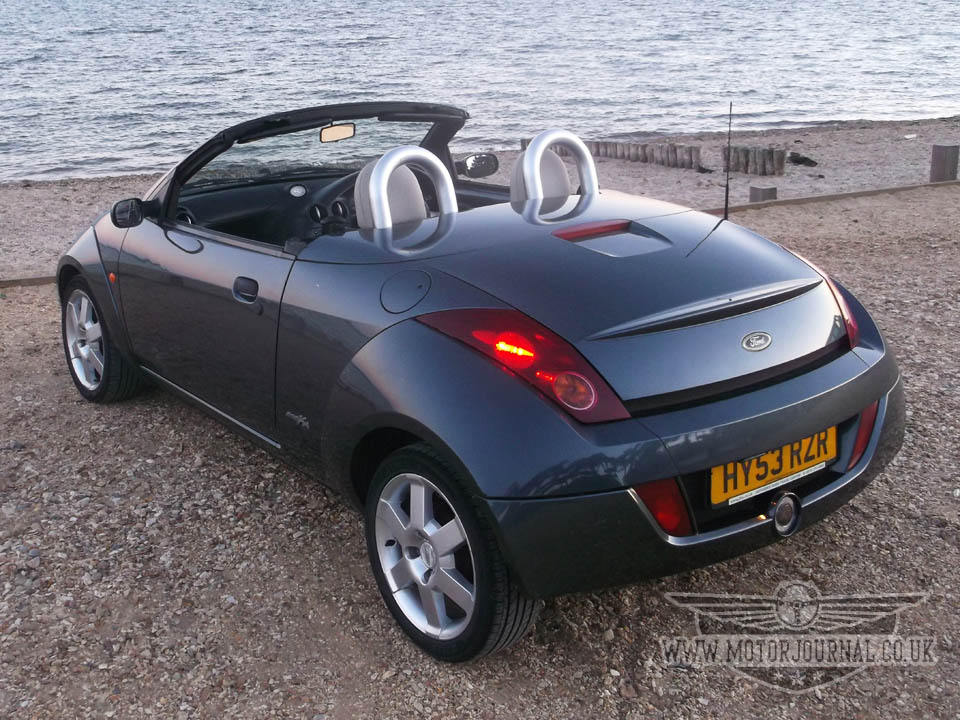 There really is something nice about sitting in a convertible down by the sea listening to the sound of the waves lapping against the shore. As we sat there eating our tucker and relaxing in the StreetKa my phone rang. I've been pretty jumpy every time it rings just lately, I looked at the screen, it was one of my friends. I picked up and before I could even say anything a voice just said, "Well?" Yes I said, quite well by all accounts. My friend said, "So nothing serious?" No I said, apparently it was just something called Lymphatic tissue, I don't know what that is really, but what I do know is that it probably isn't going to kill me. "BUGGER!" came my friends voice down the phone, "I had my eye on your Celeste!" We both laughed, and I told him that he was going to have to wait a bit longer for that one!