April 30, 2020
During the last couple of days of just sitting about the house, trying to keep my mind occupied I've had time to give a little more thought to the Jag. 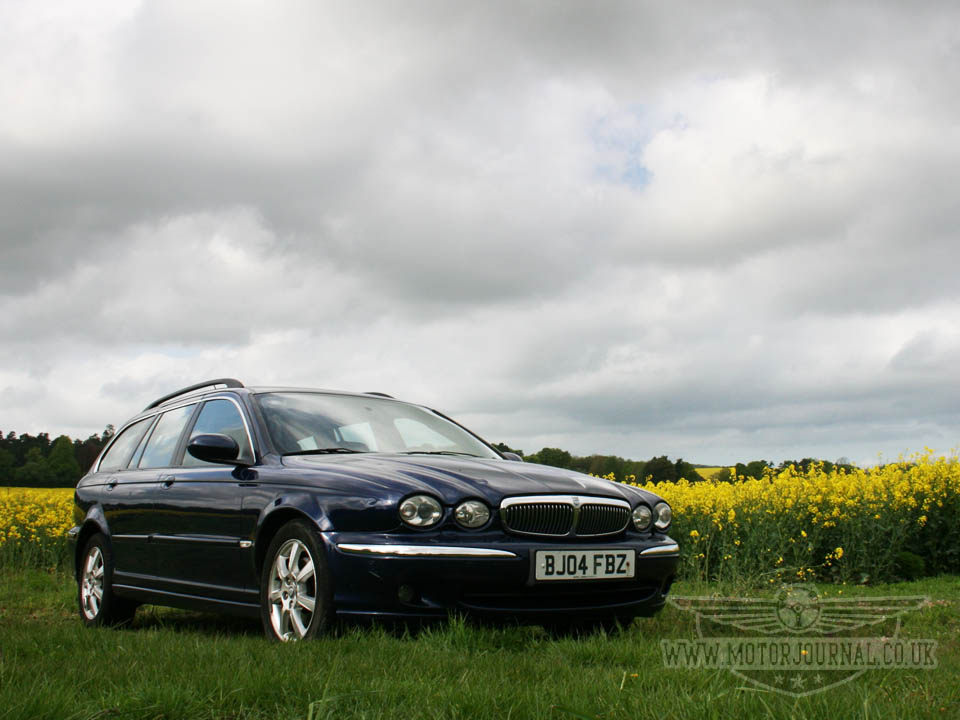 One of the things I have wondered is why I have now had two failed attempts to sell this thing? I had set my reserve at the price I wanted to recieve for the Jag, which was £1800.00, which as you might remember was the price I paid for this bucket of bolts way back in February. Clearly the price I paid for it back then was too much, so it didn't meet it's reserve. Bummer! It's typical that the car that I've liked the least so far out of the four cars that I've purchased for the twelve cars in a year project would be the one that I am having most trouble selling. There was very few 'watchers' on the bay, and only a handful of bidders two of which had no feedback and had only recently joined ebay. Due to previous experience with new bidders I always expect them to be a 'no show' if infact they win it, and infact I'm always apprehensive when I have people bidding on my stuff who are new, and/or don't have feedback. I also had very few questions about it, I think I had two or three in the days leading up to the end of the auction, but on the last day, the day the auction ended I had a flurry of questions emailled to me, all from people who had not yet bid on it, or asked questions previously. Due to not being available to answer these questions at the time, I didn't answer them! This of course meant that the people submitting the questions didn't bid, which is understandable. What I don't understand is that these people have had more than enough time running up to the end of auction to submit questions, why wait until it's almost over? I also think that another problem may be the way I write my listings, take the photos, or possibly both. Maybe it's something else altogether? Who knows, and right now I think the best thing is probably to not get too hung up on the failed listing, re-list it with a lower reserve, stand back, and hope for the best. Of course, perhaps the problem is  actually setting a reserve, I've noticed that when I don't set a reserve I seem to get far more interest than when I do. I'm guessing that this might be because people think that the reserve price might be more than they want to pay, so they just don't bother bidding in the first place. But then of course there's always the theory that when you're bidding on something, and the reserve is met, then you could actually win it, and then you get caught up in some kind of bidding war, and possibly end up paying more than you initially hoped to pay. I don't know, but to be honest, me struggling to sell this thing isn't helping me to fall in love with it!

One of the other things I think has put me off the Jaguar is that I think that the ride was too crude, and harsh, but worse than that I didn't feel that the car its self was special enough, I mean, it's a Jag for crying out loud, surely it should feel a bit special. I say this because I get to drive this car a lot... 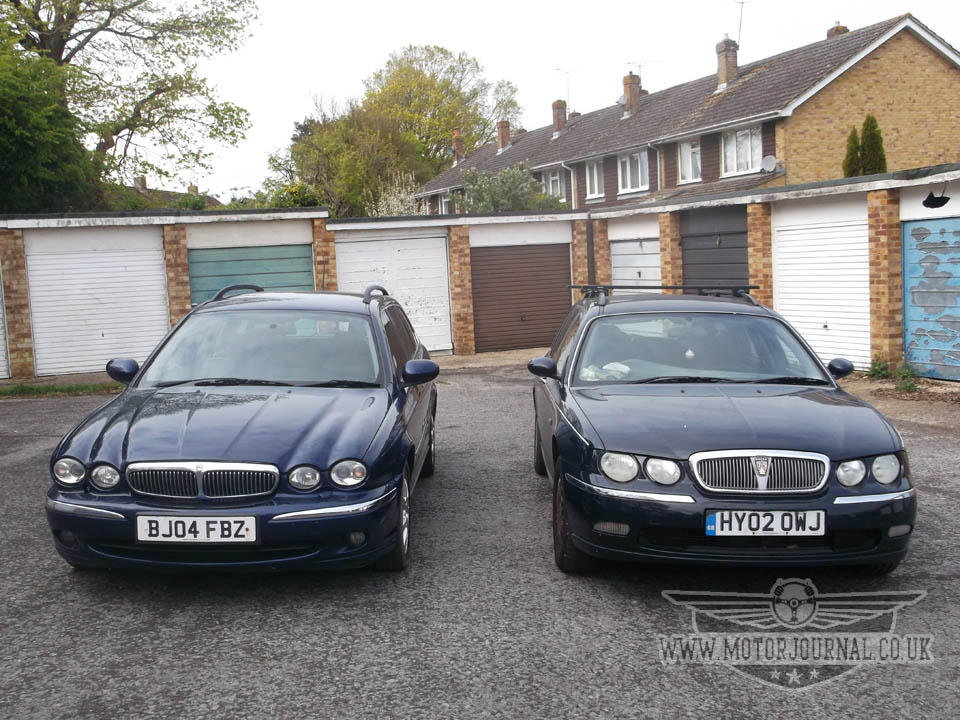 The car on the right is my Dads Rover 75 estate, Tourer, and it's a good car... Even though it is also wrong wheel drive, and powered by an agricultural engine! 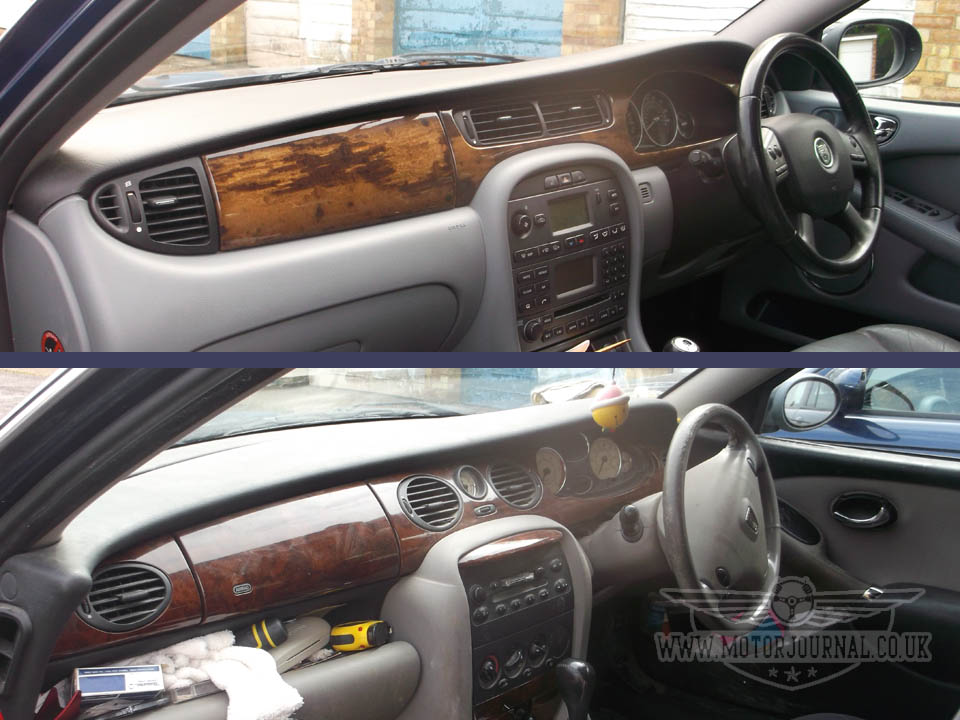 Even inside it's a similar story, infact if you were put into either cars with the badges covered up so you didn't know which you were in I reckon you'd have a job to know which is the Jaguar, and which is the Rover. Like I said, they are very similar cars, except for one thing. The Rover is better. Yes, you read that right, THE ROVER IS BETTER!! Here is why. My Dads Rover has a similar mileage (actually it's abit higher than the Jag) and it's still just as powerful, it's diesel engine will pull all day, with plenty of power. It's as quick as the Jag, even though the Rover is automatic. The ride is smoother, quieter, and more refined, and handles just as well. I would also say that the seats are more comfortable in the Rover.

The bodywork looks similar to the Jaguar, OK, it might not be quite so pretty as the Geoff Lawson designed bodywork on the X-type, but it's not an ugly car by any stretch of the imagination. But here's the clincher, for me anyway, it feels special! The quality, and fit and finish of everthing is better on the Rover than on the Jaguar, and it just feels special. I know, I can barely believe I'm writing it myself! The other thing is the price difference when these two cars where new, the Jaguar prices ranged from £21,165 - £33,050, whereas the Rover 75 prices ranged from £16,400 - £30,000. So why on Earth would you buy the Jaguar over the Rover as it's more expensive, and in my opinion not as good? I can only imagine that people were buying the badge. When you buy a Jaguar it's because you want to buy into the whole Jaguar deal. The old race wins, the E-Type, the D-Type, Steed's wide-bodied XJ in The Avengers, Simon Templars XJS in The Return of The Saint, et cetera. You're buying into the history, the pedigree, and the image, and front-wheel-drive X-Type may well have made this dream easier to realise for more people. 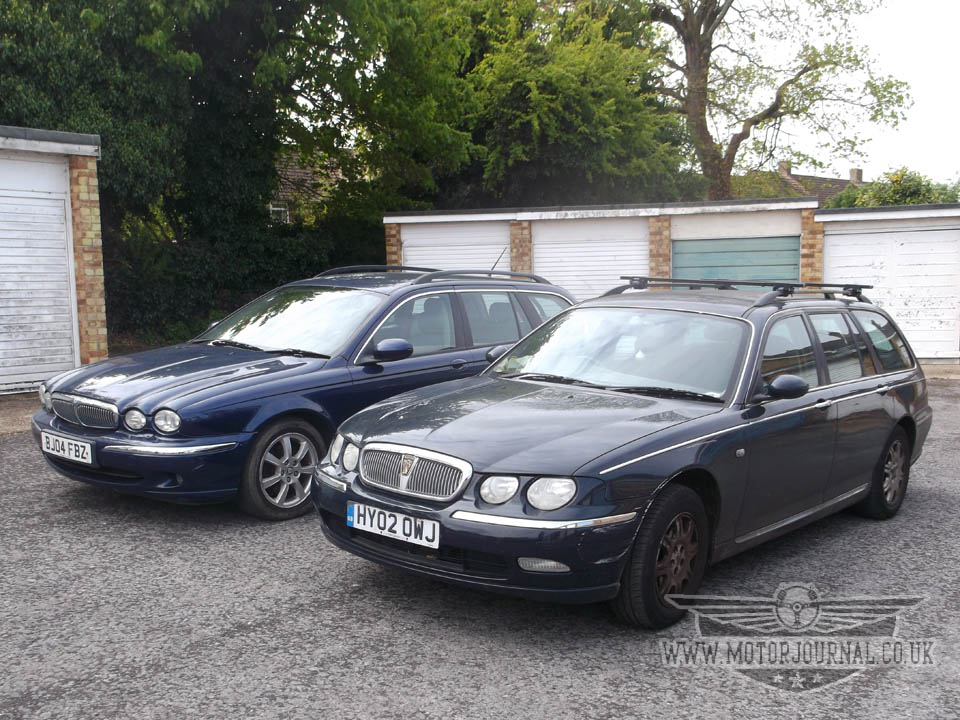 But having said all of that, I really think that the thing that I hate most about my time with the Jaguar really has nothing to do with the car it's self, but more to do with just about every armchair motoring experts view of it and especially the ones who felt they needed to tell me their views! Y'know the one, It's just an old Mondeo mate innit?

I know that I have harped on and on about this several times. So, OK let's get this out of the way here and now. Yes, the Jaguar X-type is based on a modified Ford CD132 floorpan as used on the Mondeo, and the multi link rear suspension is also from the Mondeo estate. Also the engine in mine was based on the Ford Duratorq ZSD unit as used in the Mondeo and Transit, and of course some of the switch gear is straight out of the Ford parts bin. But as I said before, whats wrong with that, I don't believe for a second that Jaguar was trying to make a silk purse from a sow's ear. They were just trying to build their car cheaper, and from an economical standpoint raiding the parent companys parts bin makes good sense, and anyway less than 20% of the X-type is shared with the Mondeo. I could understand their arguments if there were no difference between the X-type and the Mondeo, but the fact is they look different, sound different, have completely different dynamics and a totally different ambience. A bit like the Audi A4 and VW Passat, which are also based on a common floorpan, but nobody comments about that do they? 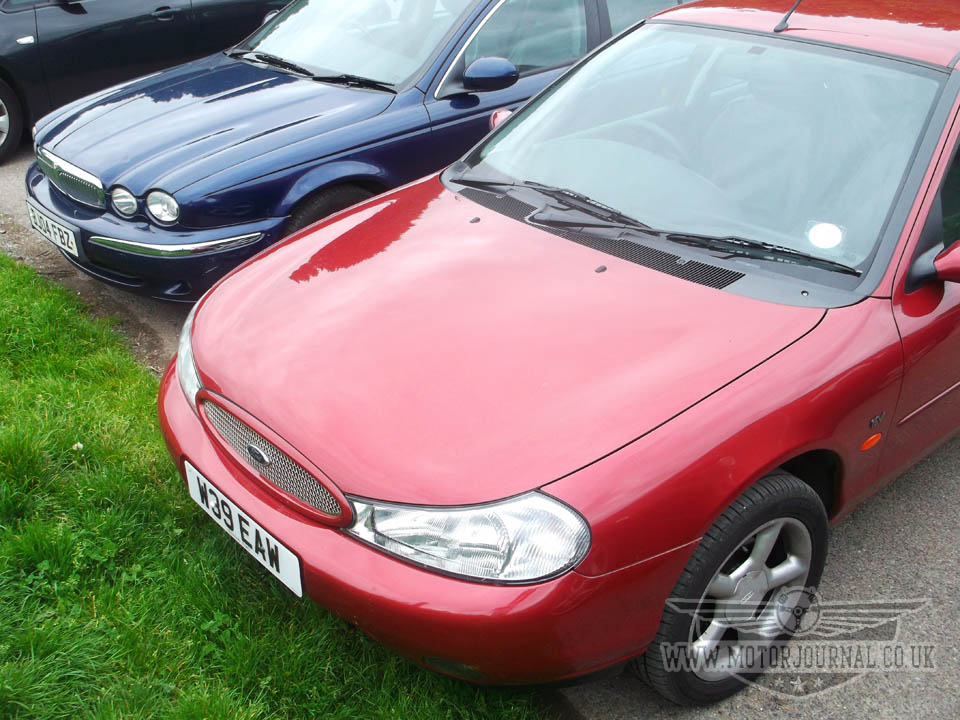 I think that Jermey Clarkson once summed up the X-type quite well when he said, "Underneath the X-type is actually a Ford Mondeo, but don't let that put you off. Genetically you are 98% Identical to a Halibut, but it's the two percent that makes the difference. And it's the same story in here, look at all this wood, and leather, and equipment, it feels very Jaguarish." Well done Jezza, you nailed it!