March 04, 2020
I was still pretty up in the air about my seating arrangements, but the problem was sitting around sulking about it wasn't getting anything done, and it wasn't making me feel any better either. The thing was, I really didn't like how the seats were going, it seemed that they would make the interior too cramped, and I felt that they wouldn't be comfortable either. To add to that my feeling was that it didn't matter what I did to them, I was stuck with them, and the more I looked at them the uglier they looked to me. Every time I sat in them, despite the fact that they were nowhere near finished, I liked them less and less, and to be honest, I was liking the HotRod less and less too! 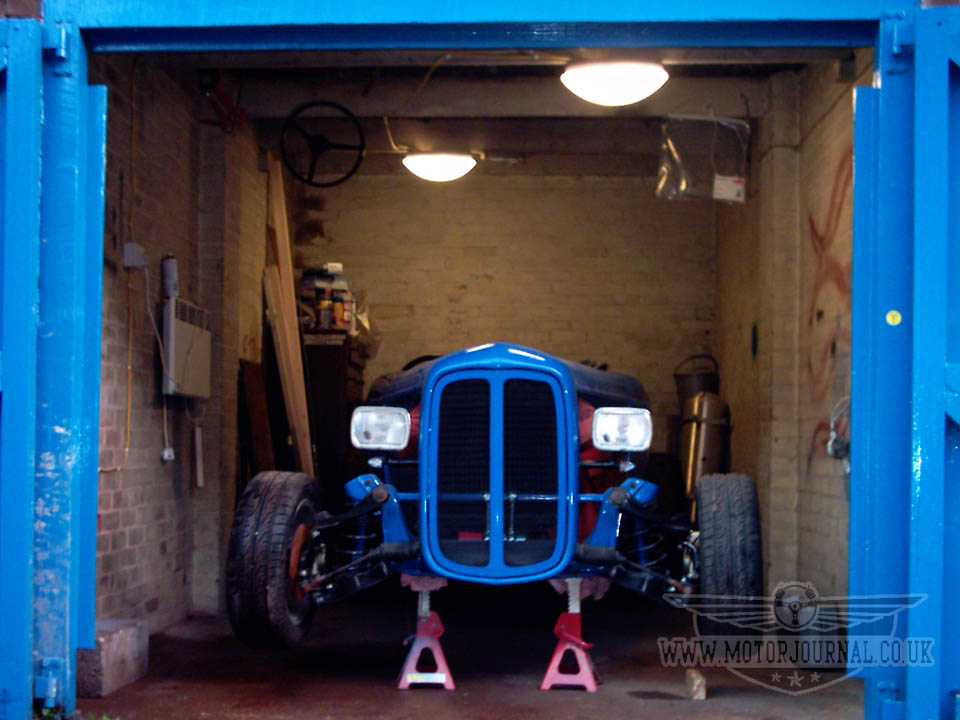 It was a hateful thing, and by now I was resenting even starting to build it. My garage where I hid myself away in was cold, and damp, the weather outside was even worse, and it always seemed to be dark! Yep, I was struggling, and everyone around me knew it. M.R. was different, he was so focused, even when things seemed completely bleak to me he could always see a way forward. He carried me a lot during this build, and he was carrying me now! He thought that what I needed to do was to stop looking, and dwelling on the seats, and turn my attention to the front of the cockpit instead. Then I got a good battering of sarcasm, and mickey taking, we laughed, and carried on. 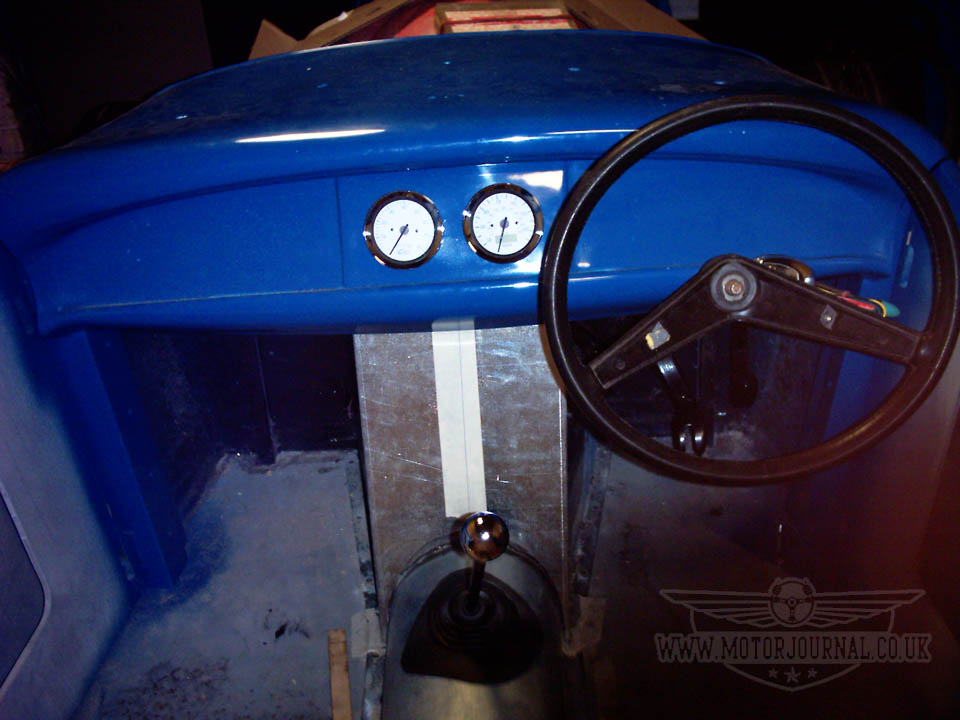 On the dashboard I knew I wanted it to be uncluttered. I knew that I wanted to have two gauges in the centre of the dash, then the idiot lights, switches, and other gauges in some sort of centre console beneath the dash. I discussed the sort of thing I was looking for with M.R. and the following day he arrived at the garage from work with a piece of steel that he had bent into shape, and cut out the bottom for the trasmission tunnel to go through. We fitted it into position, and then covered it with masking tape before deciding where everything should go. 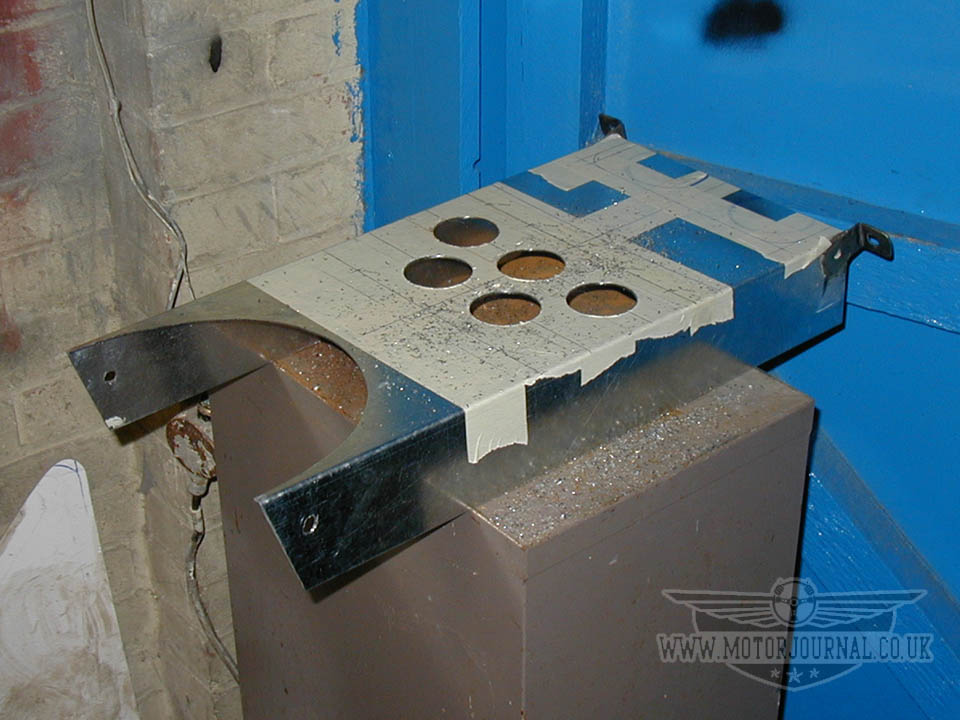 With the masking tape all marked up it was time to drill the holes. There was no turning back now, wherever the gauges, idiot lights, and switches were marked, then that was where they would always be from now on. 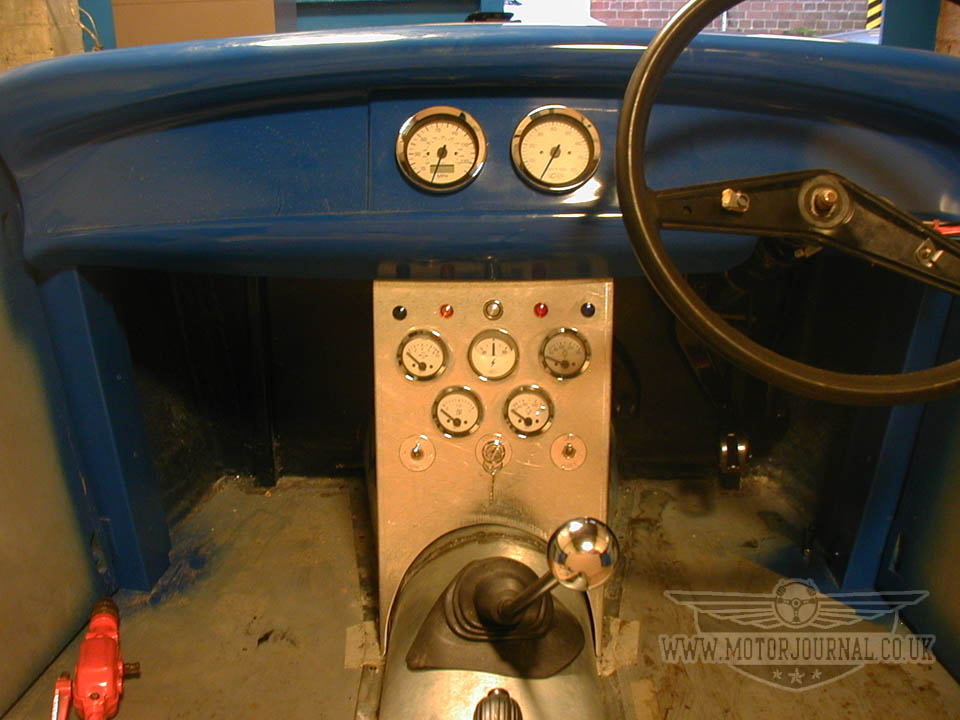 With everything now in place it was time for another trial fit before taking it all apart for M.R. to take into work and powdercoat the following day. I thought at the time that it looked pretty good, and it was pretty much how my minds eye saw it. I don't really know why I needed all those gauges, but I thought that it added to the English HotRod/Racecar look that I was after. With that done, and me feeling just a little bit chirpier I turned my attention to the transmission tunnel. I felt that it didn't need a whole lot, but I thought that there should at the very least be some sort of trim around the gear lever, if for nothing else to hold the gear lever gaitor in place. The search was on for a nice thick piece of aluminium to cut into shape to make this piece of trim from. 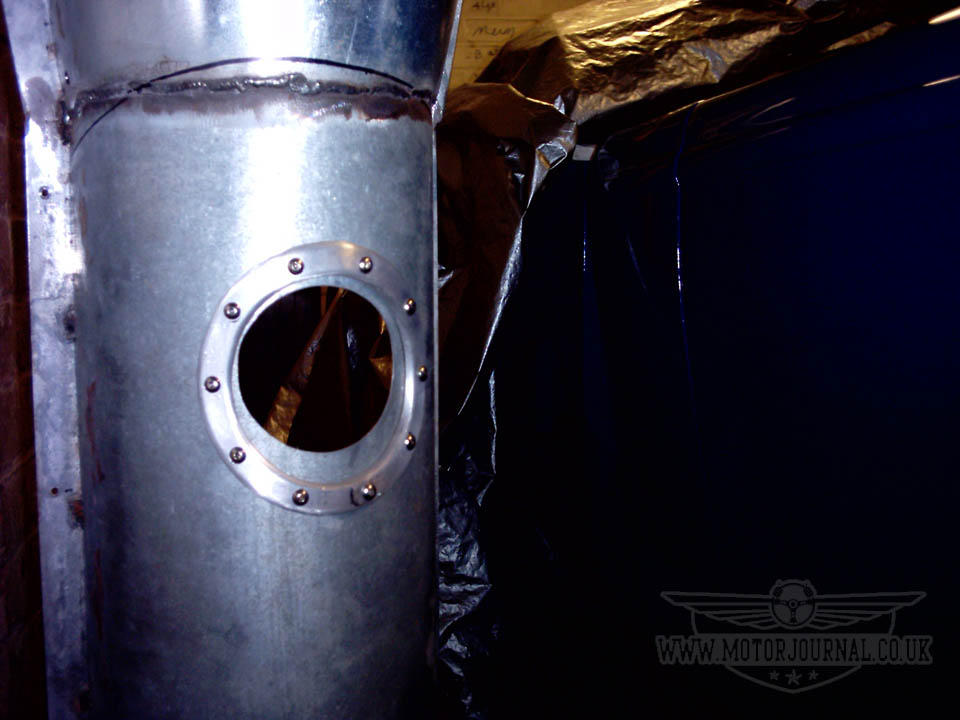 We decided to go on a bit of a field trip, and have a look around any building site skips around the town, but nothing suitable was found. Then M.R. had an idea, "I know where theres a big bit of aluminium about  3 or 4mm thick." He said. Where's is that I asked. "In the carpark, I saw it the other day!" He replied. Before too long we were stood on the sixth floor of the Friarsgate multistorey carpark in the middle of town eyeing up a large piece of aluminium. "That'll work." M.R. said, and he was right, it would work, the trouble was that it said PAY AND DISPLAY on it, and it was attached to the carpark wall. Not that this mattered to M.R. as he was already going at it with a screwdriver! I got mine out and attended to the other side. Before long our new piece of aluminium was in the back of the car and we were heading back across town to our garages. Once back at base we measured up how big the trim should be, and cut out a circle. We then drilled the holes, and tried to bend it to fit the transmission tunnel... It snapped, bugger!! OK, try again, but once again as we tried to bend it to fit the tunnel the damn thing snapped again... Bugger! OK, try again, but this time bend it to fit the transmission tunnel before drilling the holes that would fit it to the tunnel, as it was there that it kept snapping. Would you believe that even without the holes drilled around the edge that damn thing snapped AGAIN!! Bugger, bugger, BUGGER!! I was getting pretty ticked off by now, and I was wondering if I'd actually run out of Pay and Display sign before I'd made my piece of trim, and frankly I didn't really want to go and get another one. Once again we cut another piece out, but this time we decided that we would warm it right up with my blow lamp before trying to bend it. Success, at last!! Once it was finally bent into shape to fit the transmission tunnel I carefully, very, very carefully drilled the holes around the circumference to be able to screw it into place. With this finally done I sanded it with some fine wet and dry paper, and then polished it until it was shiney! The transmission tunnel was then removed from the HotRod and placed alongside the centre console in the back of M.R.s car ready to be taken into the factory where he worked the following day for powder coating. 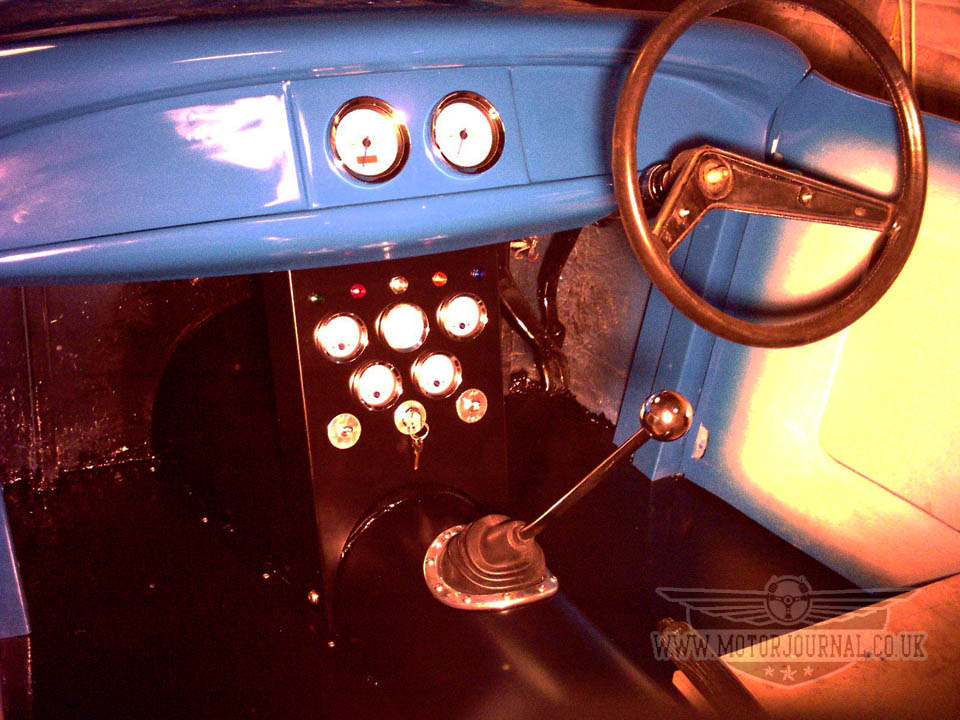 While all of this was out of the car I decided that I would paint the inside of the cockpit. I didn't really want anything covering the floor, although if I'd have managed to liberate some sort of rubber sheet then no doubt that would've found its way onto the floor. However I didn't, but what I did liberate from the building site I was working on was a five litre can of black exterior wood paint. I thought that'll do, and loaded it into my van. I gave the interior several good coats before returning most of the paint to site without anyone noticing that it had gone in the first place! A couple of days later and M.R. was back with the newly powder coated parts to go into my interior. We screwed them all into place, and I thought it looked pretty good. The interior was really starting to come together, now I just needed to turn my attention back to those damn seats and finish them once and for all!