March 04, 2020
21:45hrs on a cold wet and very windy night, the Bat-phone rings, I look at the screen, its her Worshipfulness!! I thought to myself, here we go, she's out of petrol again! I pick up, Hello, where have you run out of petrol on this very fine evening? An irrate voice blasts out of my phone, "I've not run out of petrol you moron, my car is BROKEN!!" Is it still running, I enquire. "Yes" She says, "my tyre is flat!" I respond with, spare tyre and tools are in the boot Babe, goodbye!! And hang up. It's horrible out, and to be honest, I'm sat infront of the warm fire and I'm just not feeling changing a tyre in the rain! I have taught her Worshipfulness how to change a tyre, and I know she is competant at it, as are my two little Monsters, who both get to change several tyres a year just for the experience of how to change a tyre. I don't want my two girls to be stranded with a flat on their own one day, so since they were five, they have been learning to change wheels on a car. They're getting pretty good at it too! Anyhoo, the phone rings again, guess who? Yep, it's her Worshipfulness again! Her voice shrieks out of my phone, "DONT HANG UP ON ME AGAIN, ARE YOU COMING TO HELP ME?! THIS IS MANS WORK!!" Well, I guess it is really, much like cooking and cleaning is for the chicks (Yes, my household is set in the 1950's!) OK I said, how flat is it, and where are you? "I'm in town" came the reply, "and the tyre is shredded and the wheel is bent!" I ask her how come the tyre is shredded and the wheel is bent, and she tells me that she hit a pothole in the middle of Winchester, and it just bent the rim and ripped a hole in the tyre! I tell her that if the wheel and tyre are damaged that bad, she might as well drive home carefully, and I'll change the tyre when she gets home. She's not happy, but agrees, and I get my coat and shoes on and wait for her to pull up in the street. 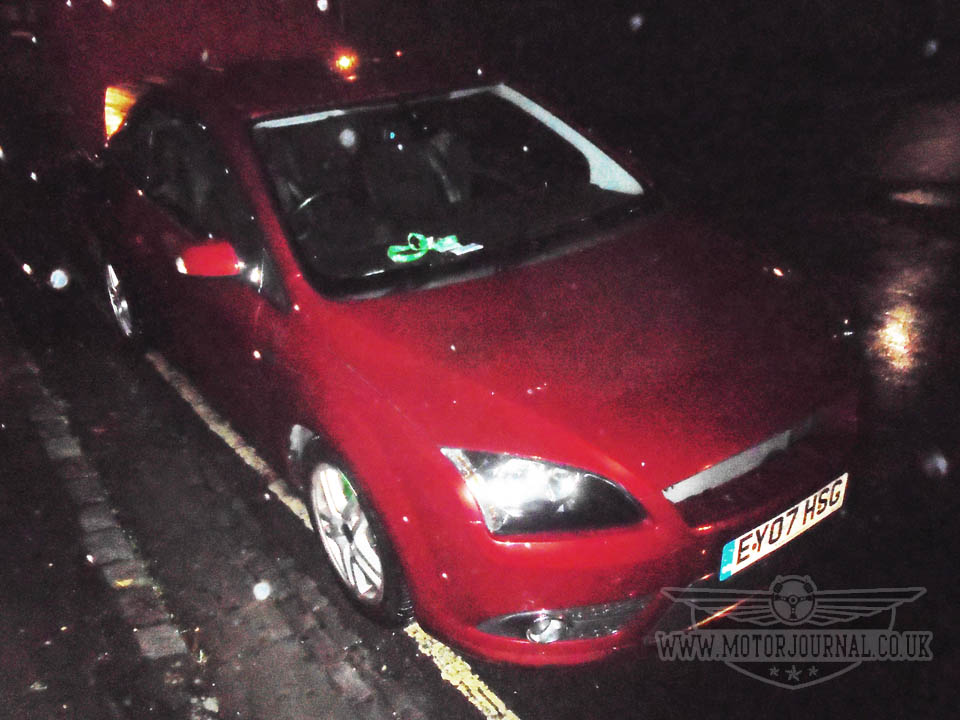 Two minutes later she's pulling up in the street outside BelongaClint, sure enough her back tyre is flat, and without doubt it has had it! I can see a big hole in the tyre wall, and a dent on the rim. She hands me the keys, and scurries off indors to dry off and warm up. 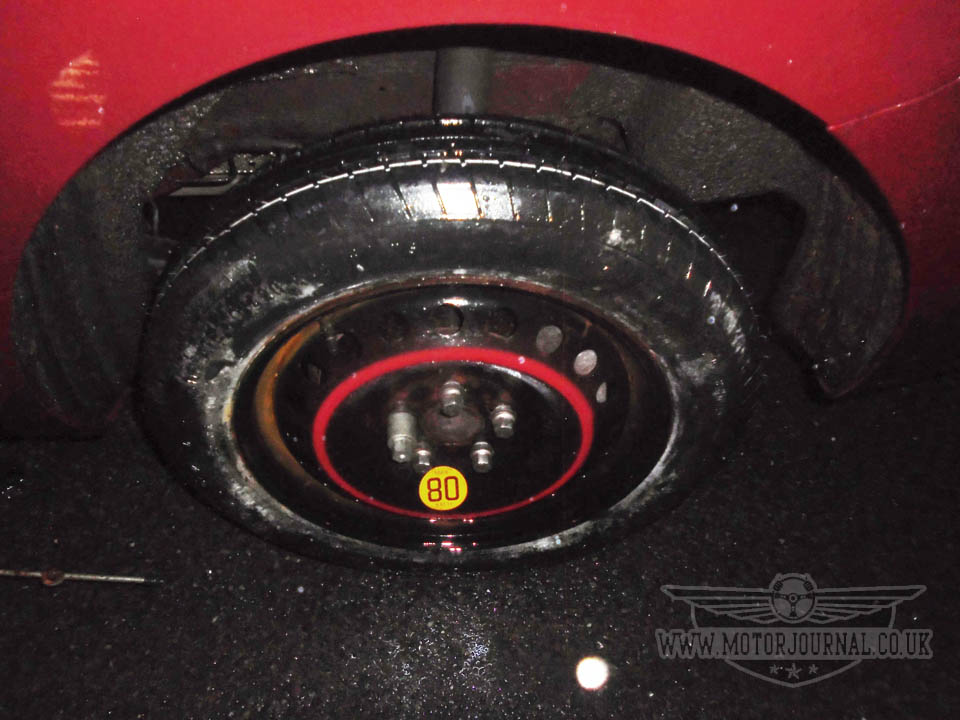 Before too long I've got the Focus' bum in the air, and the space saver on. I've no idea why Mrs Clint keeps so much junk in the boot, but after trying to move it all around so that I could access the spare wheel and tools I can understand why she was reluctant to change her wheel herself! 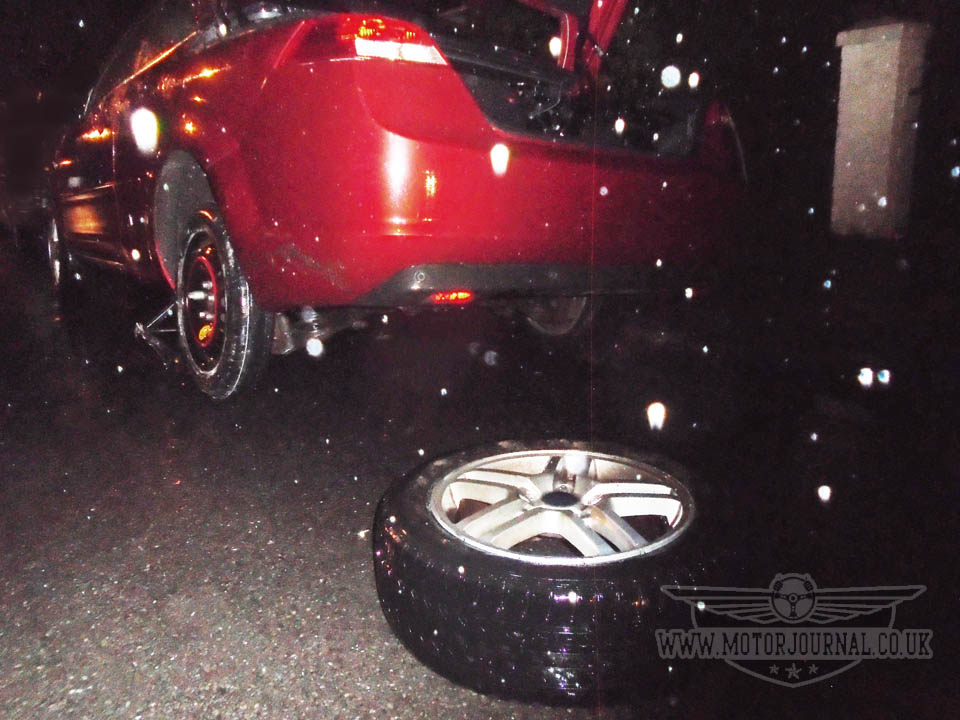 With the skinny SpaceSaver tyre on I lowered the car back to the ground, I did ask my two little Monsters if either of them fancied some wheel changing experience in the rain, but they were both as reluctant as their Mum, and to be frank, who could blame them! With the Focus' bum back on the ground I flung the tools back in the boot, and carried the alloy wheel and tyre back into the house. It was pretty dark outside, but I could see that there would be no repairing this tyre. Once inside I changed every item of clothing I was wearing as I was actually wet to the skin, and I doubt I would've been any wetter if I'd fallen in the river! With that done I decided to have a quick look at the tyre, it wasn't good... 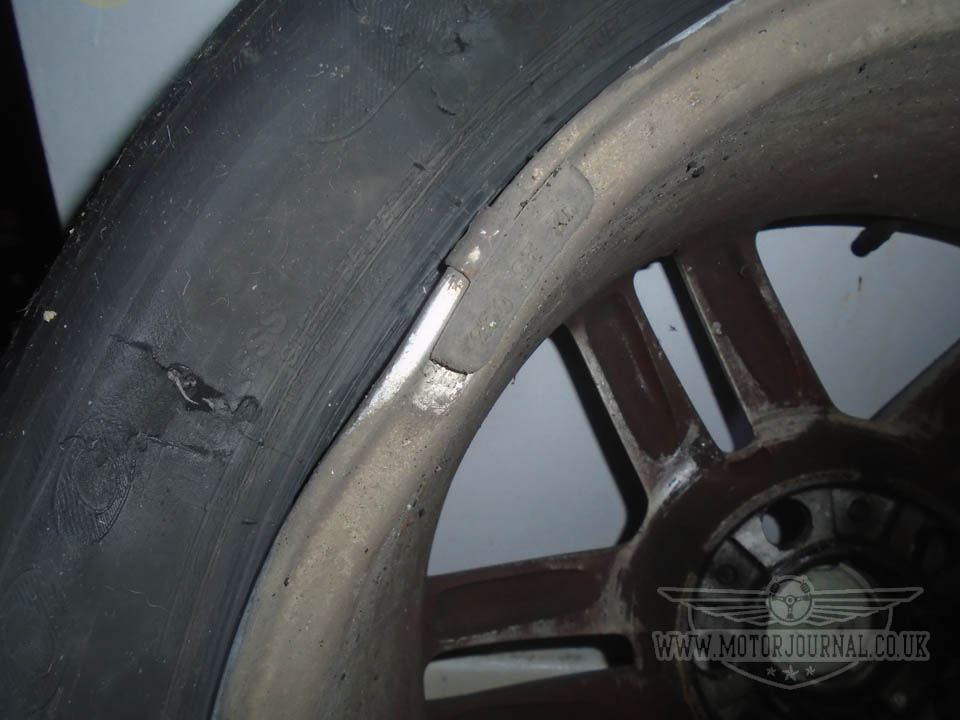 The tyre had a cut on both sides, and the wheel rim had a dent on both sides. My feeling was that the wheel needed to be replaced as well as the tyre. I asked Mrs Clint where this had happened? She told me that it was on the main road through the town, and she didn't see the pothole as it was dark, raining, and the pothole was full of water. Well, the only thing I could do at that point in time was hit eBay and see if I could locate a matching wheel, with tyre if possible to replace the damaged one. As luck would have it I found one for sale complete with tyre for just £50. I hit the buy it now, and waited for it to arrive. The following day I decided to go and view this pothole for myself. 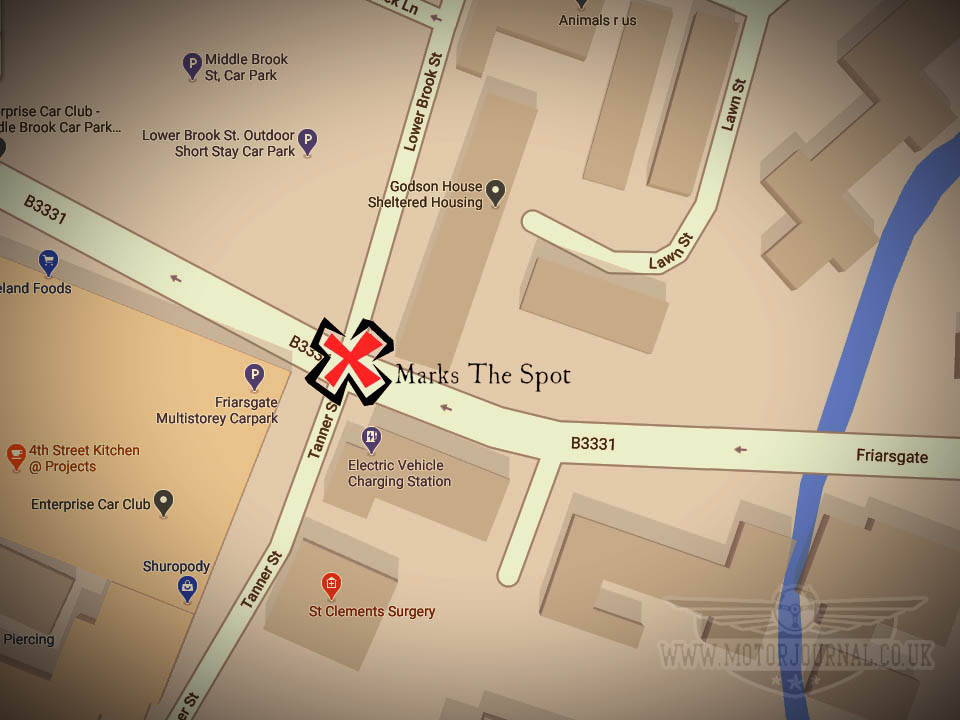 Being only five minutes or so walk from BelongaClint I walked into town to view it. Sure enough, just as Mrs Clint had explained there was a pothole, on the main road through the town, and it was pretty big! 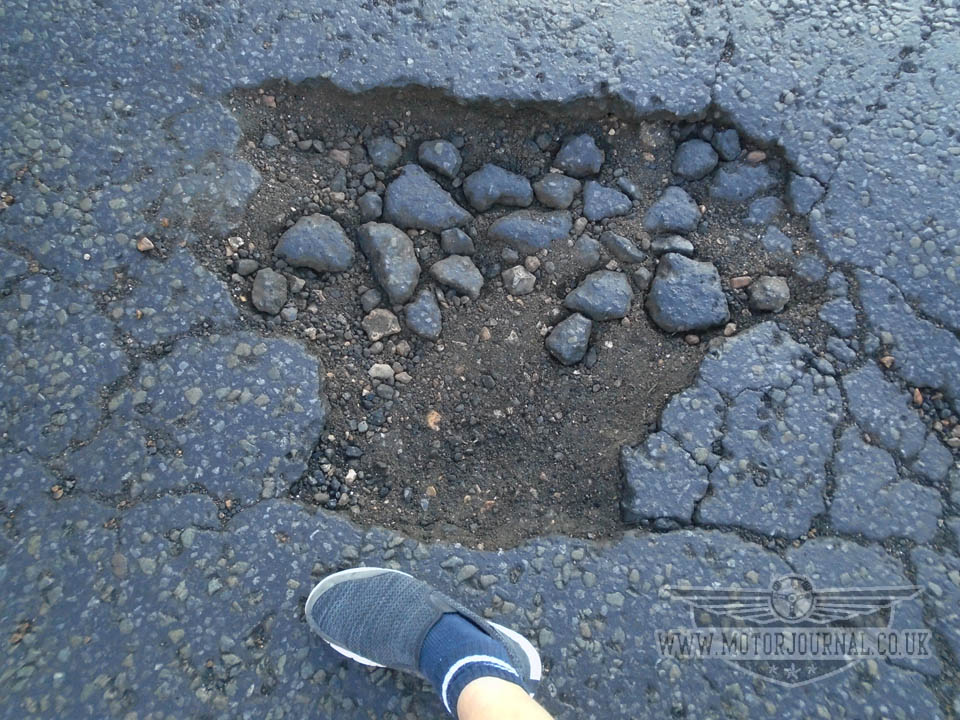 Now for scale the shoe that I am wearing in this photo is exactly a foot long! So thats a pretty wide pothole, but not only that, it was deep too! I struggled to get measurements and photos because of the passing traffic, but it was a good six inches deep in the middle! I took photos of it as best as I could. As I took these photos I noticed that a couple of council workmen were watching me photograph this bomb crater from across the road, I said nothing to them just took a few snaps and scurried off. 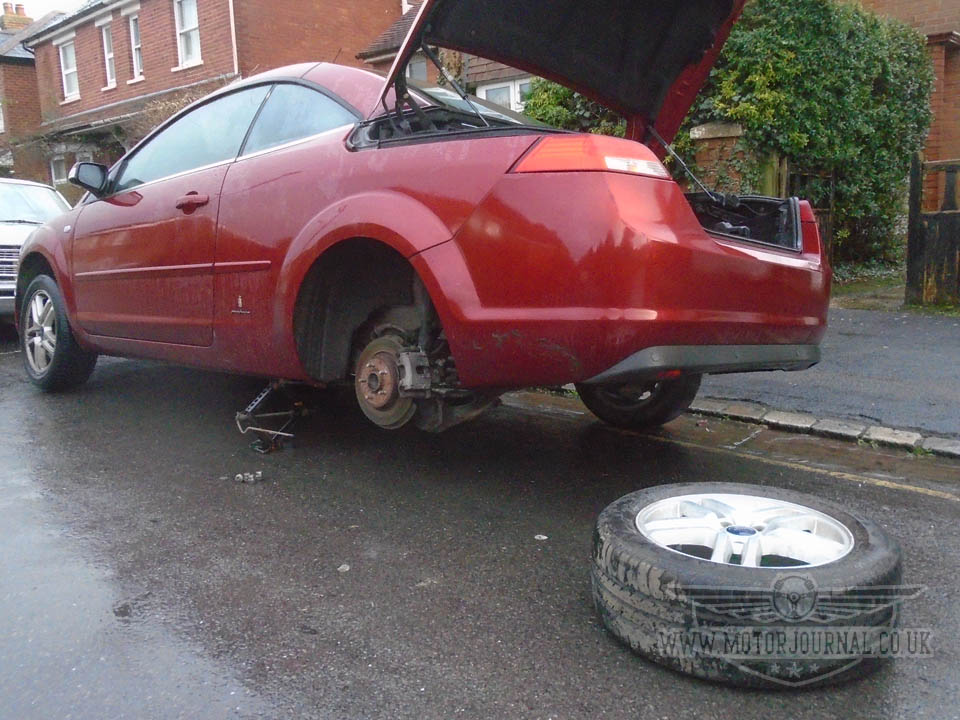 A couple of days later I had the bum of the Focus in the air once more, again in the rain because that really does seem to be the only weather we get these days! But the Space Saver was soon changed for the one that I had bought on eBay. Despite the seller saying that the tyre was in good useable condition it has some pretty deep cracks in both the walls and the tread, and so, with the new wheel and tyre on the Focus I sent Mrs Clint off to Kwik-fit which is just down the road from us to have a new tyre fitted. 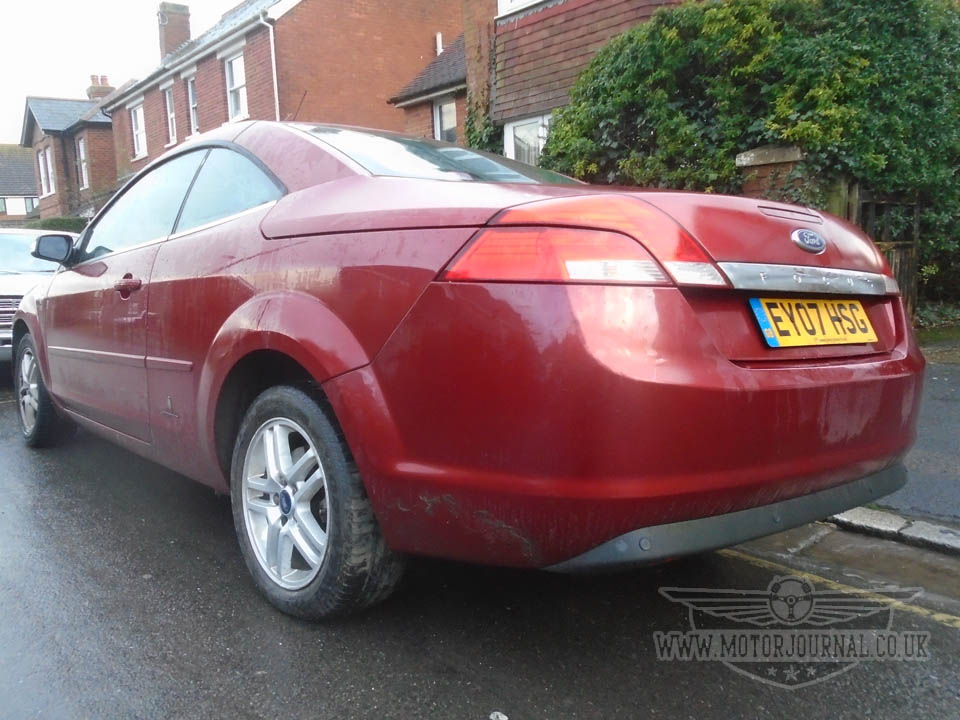 With the new tyre fitted I felt much happier about Mrs Clint driving it on her thirty odd mile commute to work in the morning. I'm sure that the tyre that was on the rim was probably OK, and if she only drove it around town to go to work I might have let it stay on there for a bit, but sixty odd miles a day to work and back on some pretty fast roads I felt might be pushing her luck a bit. As for the pothole, well I think it's pretty rediculous the state of the roads around Winchester, especially when you consider how much council tax we all need to pay, and how much we need to pay just to park outside our own homes in my little town. Not to mention how much VED we all need to pay to drive our cars on the roads, at the very least the roads should be fit for purpose! It's fair to say that I was pretty damn angry about all of this, and I had planned to write a letter asking for some sort of compensation for the new wheel and tyre for Mrs Clints car. But you know what? The day after I took the photos of the pothole in the town, that pothole got filled in! I wonder if this was a coincidence, and Mrs Clint just got a bit unlucky in hitting the pothole just days before it was due to be repaired. Or did the council workers who saw me photographing the pothole say something to whoever is in charge of looking after the roads around here so that they could attend to it before I made a complaint? I guess I'll never know, but it does seem a bit odd to me. Anyway, I guess all's well that ends well, and so here endeth my little rant about the state of our roads in my little part of the world!