February 12, 2020
Paranoia has got a tight grip on me. Pretty much everyone I talk to about my Rover 416 has said the same thing, the head gasket is going to fail at any minute. The reason for this is because, according to the experts, the only reason the car was up for sale is because the head gasket is about to fail. I'd normally just ignore this waffle and put it down to mindless babble, but for some reason, I can't ignore it. I must admit, when I was putting in my bid I did wonder if the head gasket was on its way out, but it's too late now, it's here, and it's mine, so no matter what happens to it from here on in, it's on me! My paranoia of the head gasket failing is so bad that it's actually stopping me from driving this car. Almost every time I take it out, before I go I check the oil and water! I never do that! I check it periodically like most people do, but not every day! Normally for the first month I'd check it once a week, and then if it all seems OK, I check it once a month. So why have I found myself in the grips of this paranoia that the head gasket is going to go on this now? I guess partly because the fragility of the Rover K-series engine is infamous amoungst car guys (and girls), and everyone and their dog knows someone whos ended up with their Rover K-series powered car sat on the side of the road engulfed in steam! Partly also to the bad press the engine got when it was still fairly new, and partly because everyone wants to share their Rover K-series horror stories with me! I must get over this, it really is sucking the fun out of driving it for me!

So tonight, while Mrs Clint was making some delicious fish finger sandwiches I figured that maybe I should get out there and spend a little time with my Rover... 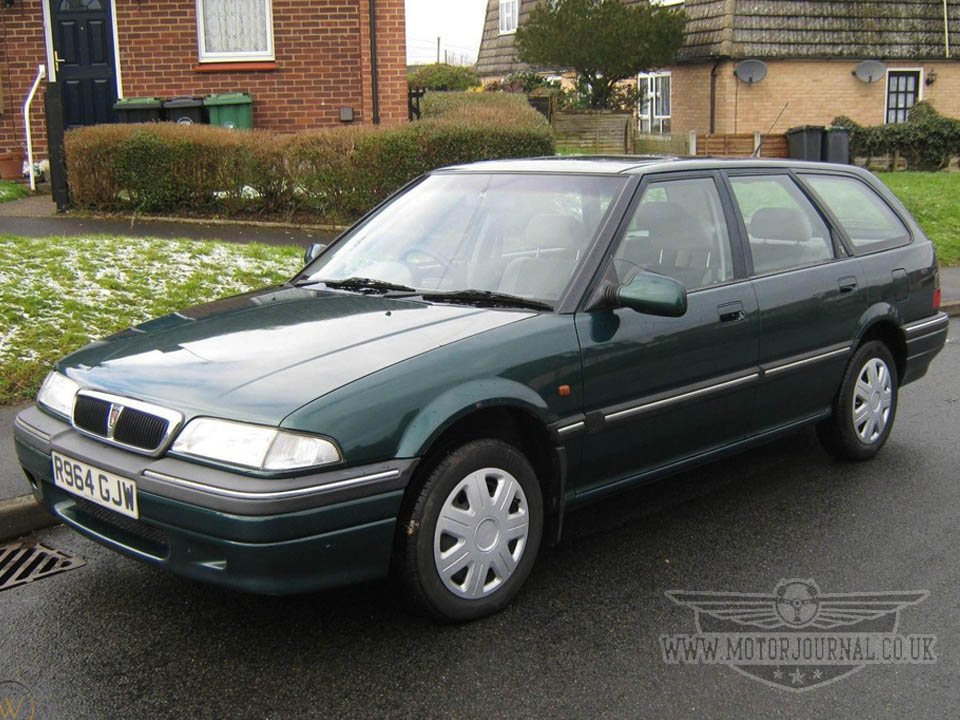 At the very least, even if I'm not going to drive it I've got to do something about those hideous wheel trims! After all, I've got a grubby set of Rover 25 alloy wheels that should bolt on and improve the looks of the thing no end! 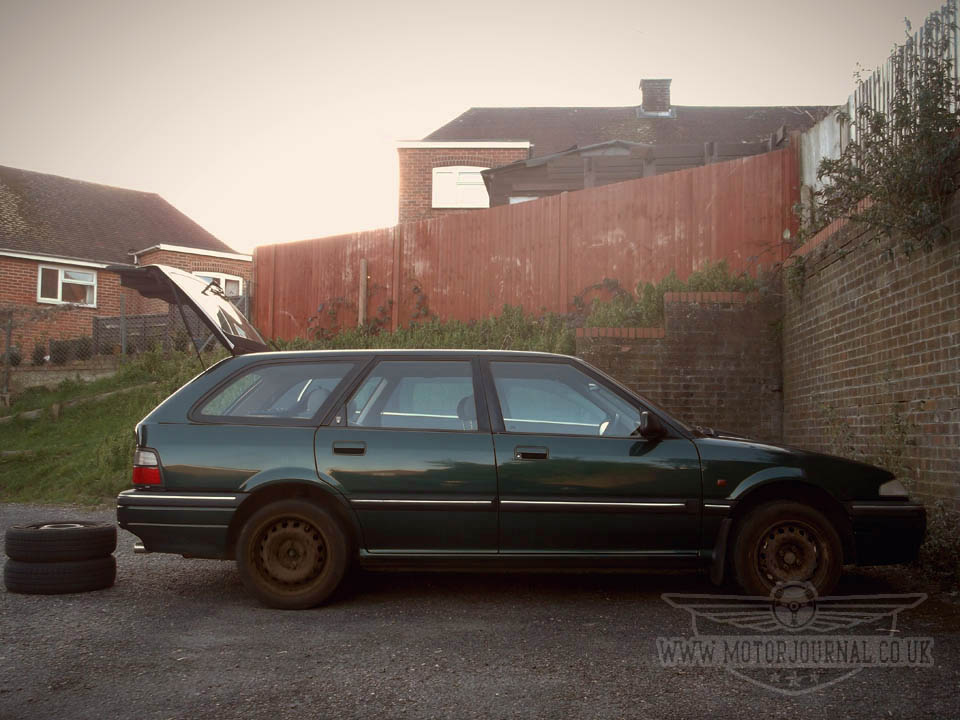 Despite being grubby the Rover 25 alloy wheels were not in bad shape at all. Before I gave them a good scrub down I had considered lightly sanding them down, and repainting them in a nice gold colour. I don't like gold wheels as a rule, but I did think that maybe with the dark green bodywork of the Rover, if I picked my shade of gold wisely, they might look rather fetching. I discussed this with my friends, however the general feeling was that they would probably look good painted black! Black?! I can never understand the painting of alloy wheels black. For me, why would you go to the trouble of having pretty alloy wheels, only to paint them black so you cant see them? I mean if I was going down that route, why not just remove the plastic bin-lids, and drive about on the black steel wheels instead? No, black wasn't for me, they would either be silver, or maybe gold. After scrubbing them clean with a toothbrush for maybe an hour or two I decided that actually they were in a good enough condition to just leave them as they were. They barely had a mark on them, so they didn't need to be painted, and as they didn't need to be painted, then silver was going to be the colour that worked for me. 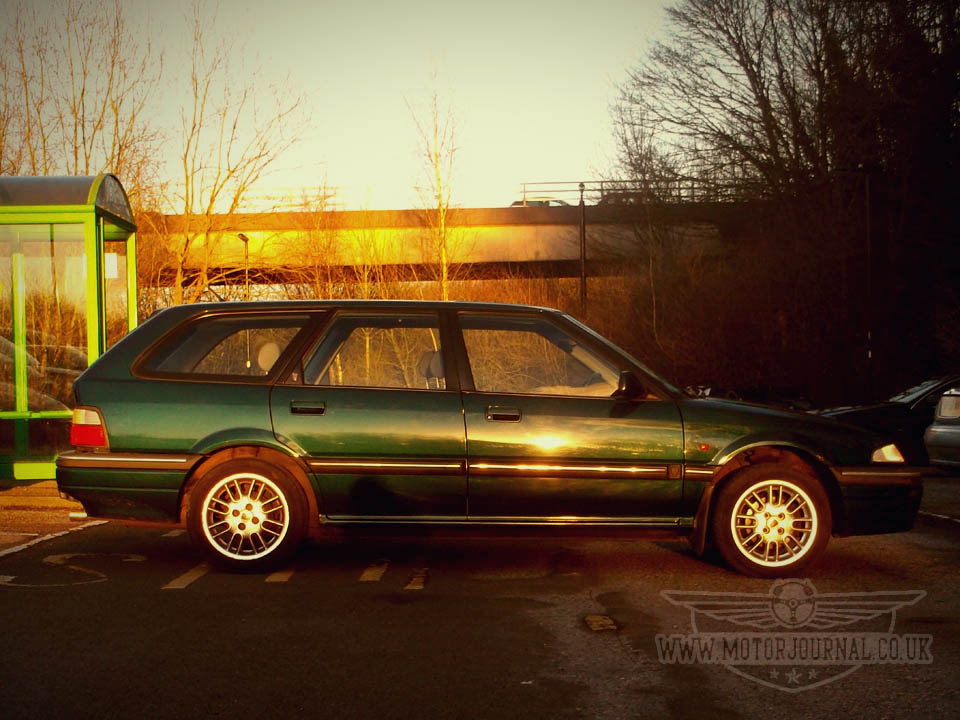 I bolted the wheels on, and decided that now they were finally on the car, I should go for a bit of a test drive, just to make sure they were all OK. With the engine humming I carefully headed out onto the road for a test drive. I didn't go too far, just a half mile or so to my nearest car park to grab a quick snap of the car with the alloy wheels fitted, and then back home for dinner. It all went well, the wheels felt good, and didn't rub on anything, and best of all the engine didn't self destruct, so all in all and good test drive! I don't know why I've listened to everyones K-series horror stories, but I did! The stupid thing is, if I think about it logically an eighteen year old car with over 100,000 miles on it surely would have been fixed by now. Especially one that was as in good condition as this one seems to be. I don't think this car has ever wanted for anything, it has definately been loved in its lifetime, and my feeling is that any car thats been loved and cherished like this one has been, has already had it's head gasket failiure problem fixed. Time will tell I guess, but in the meantime I've really got to get into driving and experiencing this car, and if it goes off with a pop, then it goes off with a pop! It will all become part of the story of my time with this car. Besides, if the worst comes to the worst it will hopefully at the very least provide an interesting tale, and I can then add my own Rover K-series tale of horror to Rover folklore!