January 26, 2020
With the bodywork completed for the most part we took a short break before making a start on the interior. 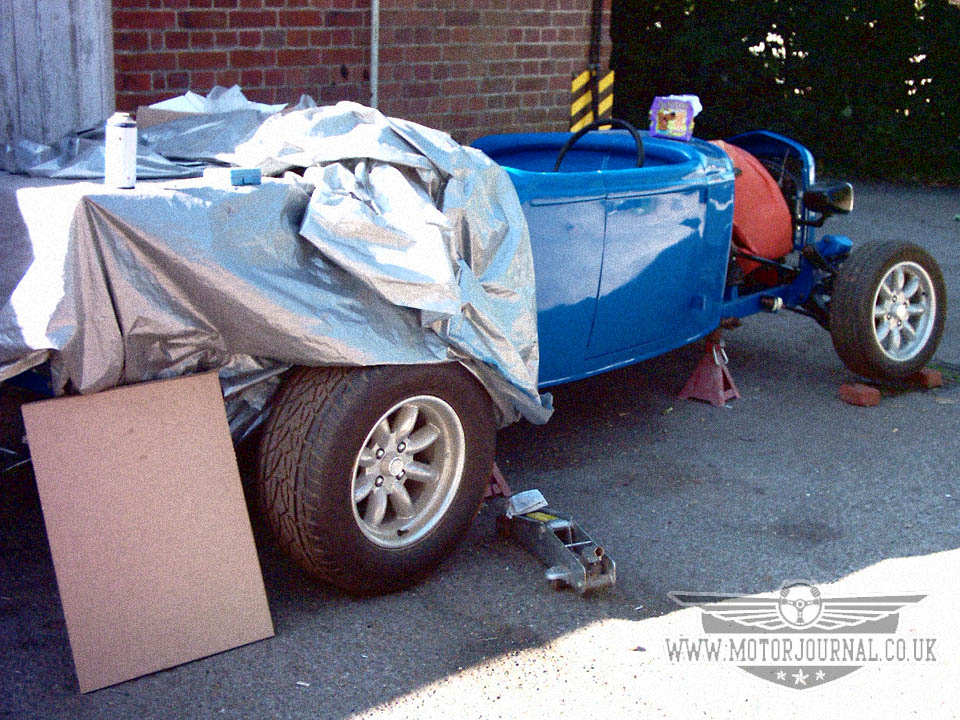 To be honest, I was getting pretty cheesed off with being there night after night, and weekend after weekend! By this point in time the build had been going on for a couple of years, and we had worked on it for atleast a couple of hours on most days. It felt relentless! The strange thing is, while I was having a break I was constantly thinking that really I should be working on my Hot Rod, so it turned out that it wasn't much of a break after all. But it did make me realise that actually I needed to just plough on regardless and get it done!

I figured that as mechanically it was getting pretty close to being finished, and bodily it was almost there too, the next step for me was to try and work out what sort of an interior it should have. My feeling was that it should be a bit spartan, although not bare bones. 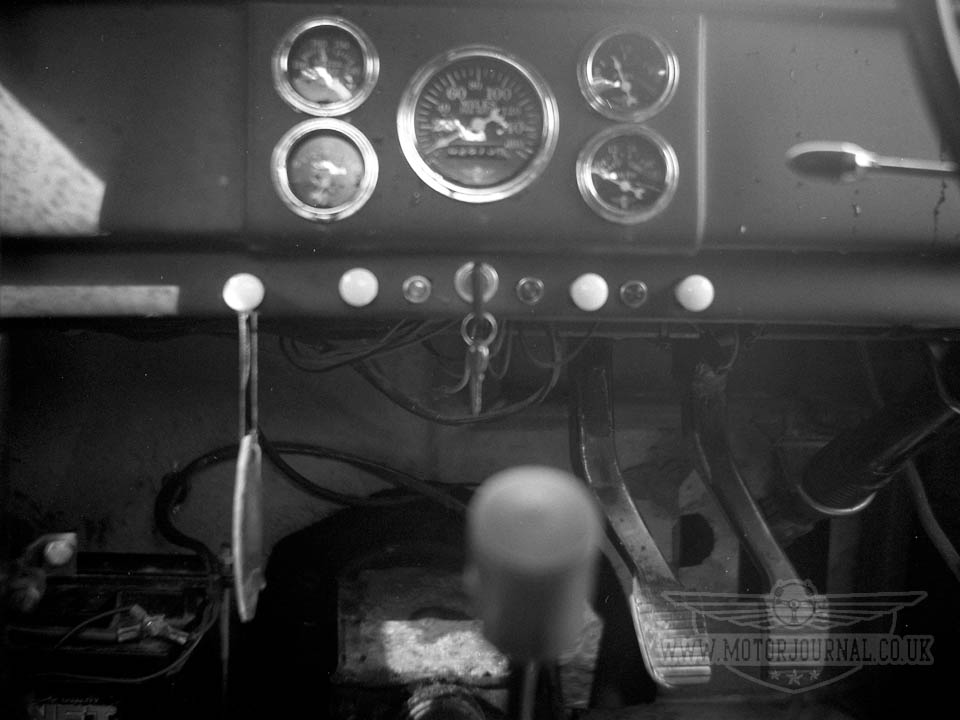 I'd driven a bare bones Hot Rod before, and although it was achingly cool two things that stuck in my mind were the battery strapped down in the passenger footwell, and the lack of transmission tunnel in the cab. I wasn't too worried about having the transmission exposed in the cab with me, and I wasn't too concerned about about the wind, and possibly the water from the road coming up through the hole as I drove along either. What did concern me was that while I was driving it, I remember hearing a ching-ching-ching sound coming from the middle of the floor somewhere, only to look down and see that it was actually my zipper pull on my bomber jacket I was wearing. It was only rubbing, and bouncing off the propshaft as it was rotating while I drove down the road! I knew this wasn't for me, and I knew that really I wanted the transmission covered over too. 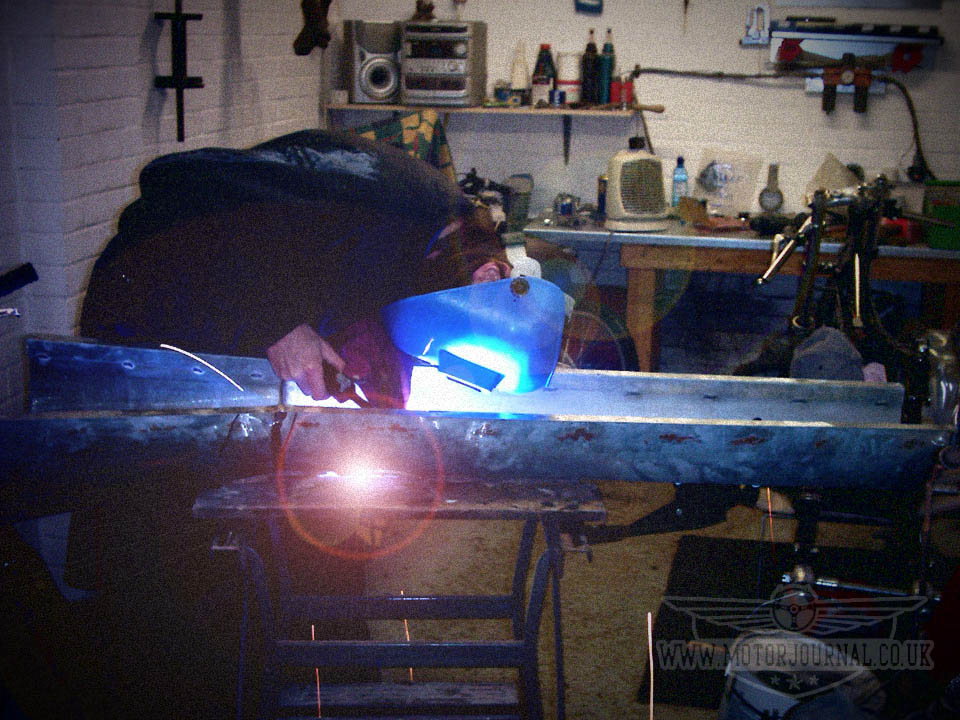 M.R. rolled some steel at work, and brought it home to the garage for us to cover the transmission with. After a little bit of fettling to fit the gear lever, and brake lever as well, it was ready to go in. I was pretty happy with how it looked, and before long I was starting to try and create some sort of a seat using some wood that I had liberated from the building site I was working on. 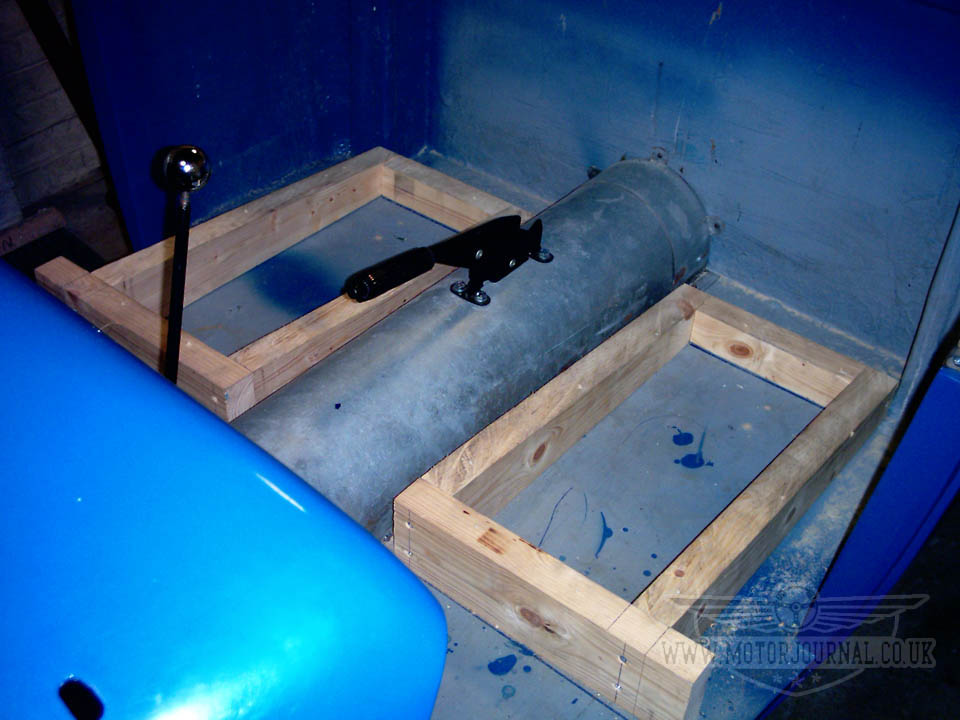 My initial plan was to make some sort of bench seat, but with the transmission tunnel in place it soon became obvious that if I was sitting on a bench seat, then I'd be sitting pretty high up, and peering over the top of the windscreen as I drove along. Flies, bugs, grit and other crap thrown up from the road into my eyes was not part of the plan... Neither were flying goggles! The next idea was to build two seperate seat bases, and have a single seat back shared between them both. Not being much of a carpenter I made up two basic frames and screwed them into position. 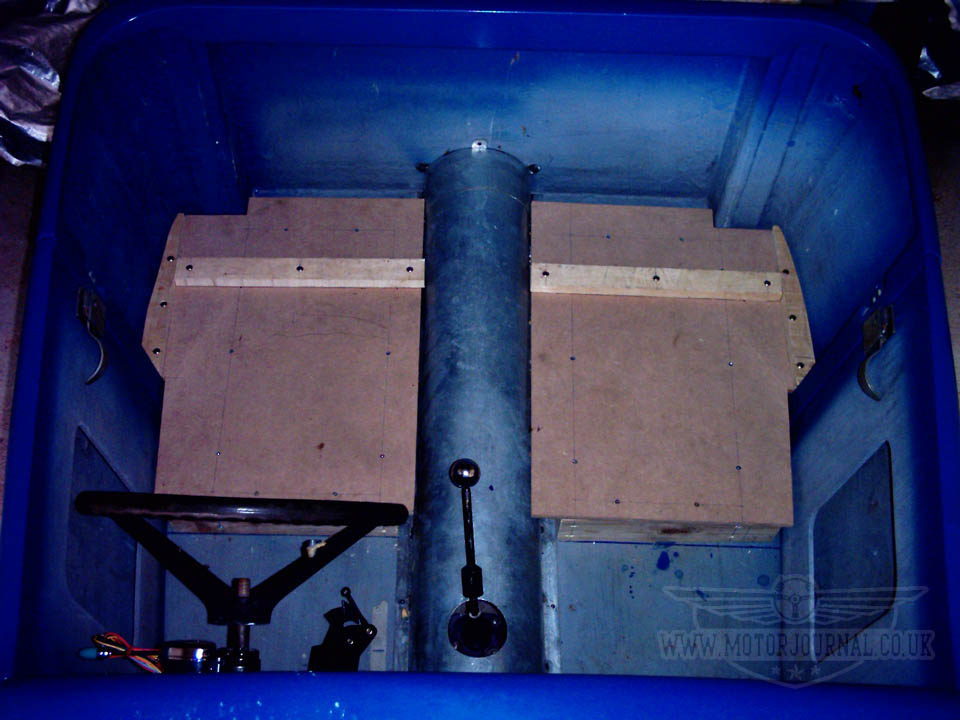 The next step I thought was to make a pair of seat bases. These were screwed to the frame, and my feeling was that I would fix the cushions to the bases after I had fitted the seat back. 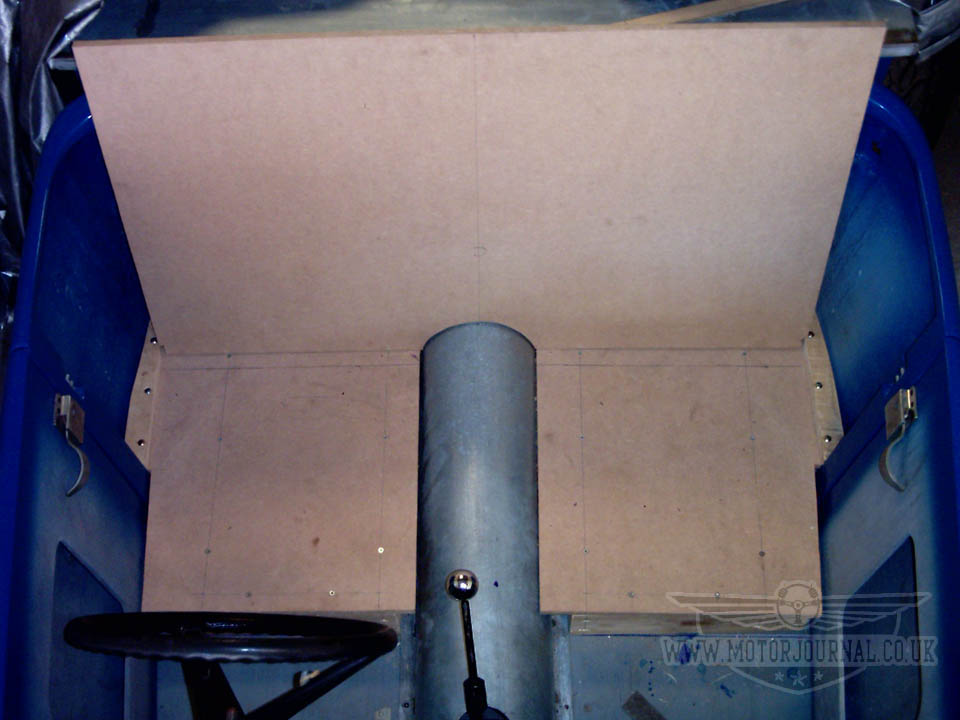 A large piece of MDF was put onto the bases to make the seat back from. I didn't really want the seat back to protrude above the top of the cab belt line as I thought this would look untidy, and shoddy. After a fair amount of measuring, cutting, grinding, and fettling I had the back fitting inside the cockpit as I thought it should. I decided that I'd try it for size, and sat in. It seemed a little too low to me, but I didn't really have too much room to play with. But loooking at the pile of wood that I had liberated from site, I thought that I  might just make the seat base cushion on a seperate piece of 1" thick MDF, that would sit on top of the MDF seat base that I had already created. 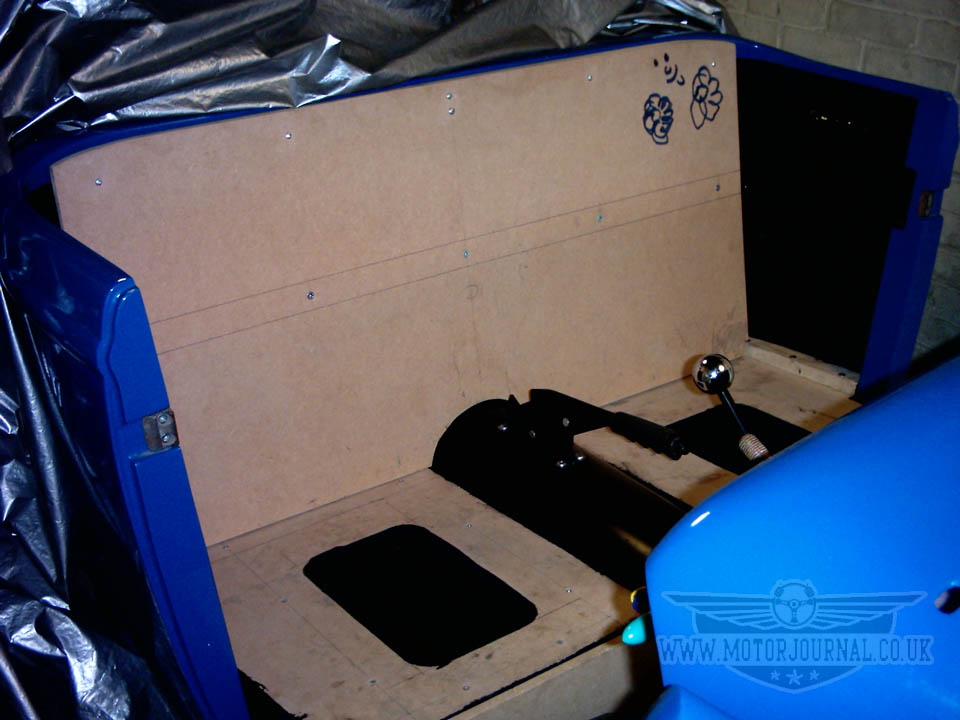 I chopped a couple of holes in the bases to locate the base of the new seat cushions. I thought that these would also be useful to be able to store maps and other odds and ends that you might normally store in the glovebox in. With the seat done, apart from upholstering I sat in it again. I've got to be honest, I still wasn't happy. I liked how it looked, but the seating position wasn't great. I talked about this with my friends, and they thought that the problem was that it was unfinished, and needed padding. I wasn't so sure, but I did agree that maybe with padding it would be better.

After a trip to the local tip I returned to my garage with two cushions from an old sofa. I rested them on my newly built seat to see if it would be any better with a little padding. If anything, it was worse! I now felt that I was just sitting far too close to the steering wheel, and I was pretty hunched up in the cockpit. I was pretty sure that I wouldn't be able to drive too far in this seat. Again I conversed with my friends about this, and the general opinion was that really I was stuck with it, as I only had so much room to play with in the cockpit. To be fair to them I felt they were probably right, but my Brother, who was building a Beach Buggy at the time had managed to find a really small pair of seats from a Ligier micro-car. After a quick measure up I was pretty sure that they would fit my Hot Rod cockpit, and better still, they were more comfortable than what I had created. The problem was, where was I going to find another Ligier in a scrapyard to donate its seats to my Hot Rod. I scoured my local scrapyards looking for another Ligier, I even thought about using the rear seat from the same Ligier that donated its front seats to my Brothers Beach Buggy, but because of my transmission tunnel I knew that wasn't going to work. the best I could find was a pair of front seats from a Fiat Panda (an original Fiat Panda). The problem with these was that although I could probably just about squeeze them in for the width, the tops of the seat backs would be about a foot above the beltline of the cockpit. I knew this wouldn't work for me from an aesthetic standpoint, and so I left them there. I thought that there must be a better way, but I just didn't know what it was.

I started to feel like I had built something that would forever be uncomfortable to drive with those seats, or hideous to look at with regular seats from a car. I felt pretty urinated off at this, I'd been working on it a long time, and had come a long way to build this, and I was determined I wasn't going to be let down by rubbish seating. I knew there must be another way, and so, determined to find another seating option I started to carry a small tape measure around with me everywhere I went. I thought that at some point, somewhere I would find the seats that would answer my seating problem. I just hoped it would be sooner rather than later!