December 09, 2019
I had lots to do today, mostly running about picking things up for work in between picking up various purchases from the bay of E. 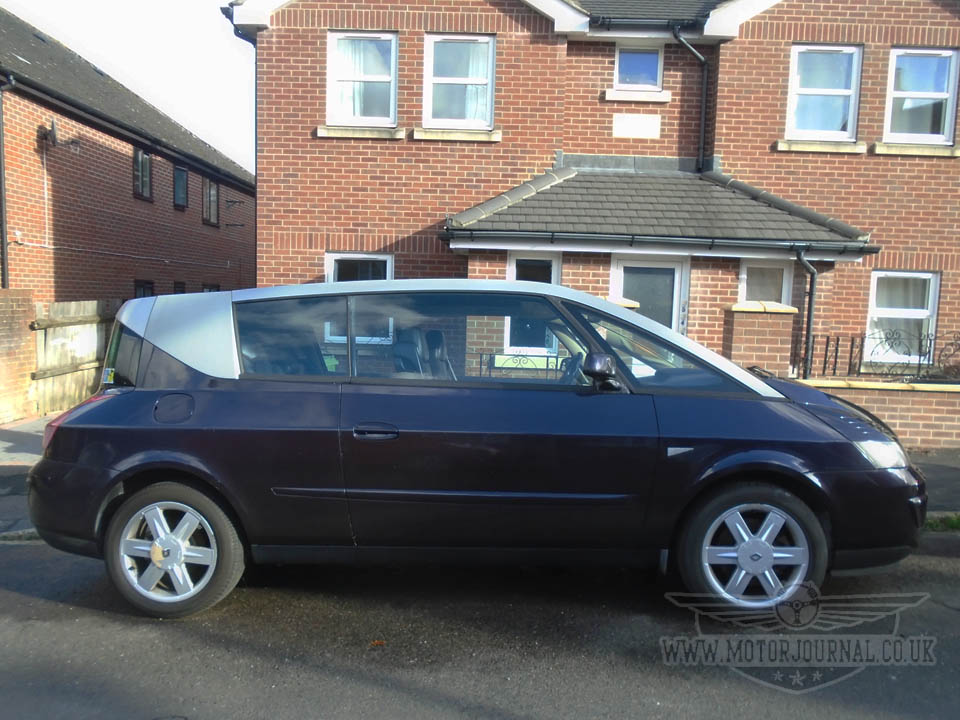 My initial plan was to take the Navara, I mean one of the purchases that I made was a set of wheels for it, and so it would be perfect for the job. But the more I thought about it, the more I thought that actually, the Avantime is what I'd like to drive. I was even sitting in the Navara, satnav plugged in, first destination all ready loaded waiting for me to hit 'DRIVE', engine running, and then I just thought, nope, it's an Avantime day! Of course, trying to load four 16" alloy wheels into the boot of the Avantime gave me second thoughts, but by then I was over 100 miles from BelongaClint, so it was too late. Besides, they didn't have tyres, and the Avantimes boot is pretty large! But what swung it for me was not the size of the boot on the Avantime, but the size of the seats... 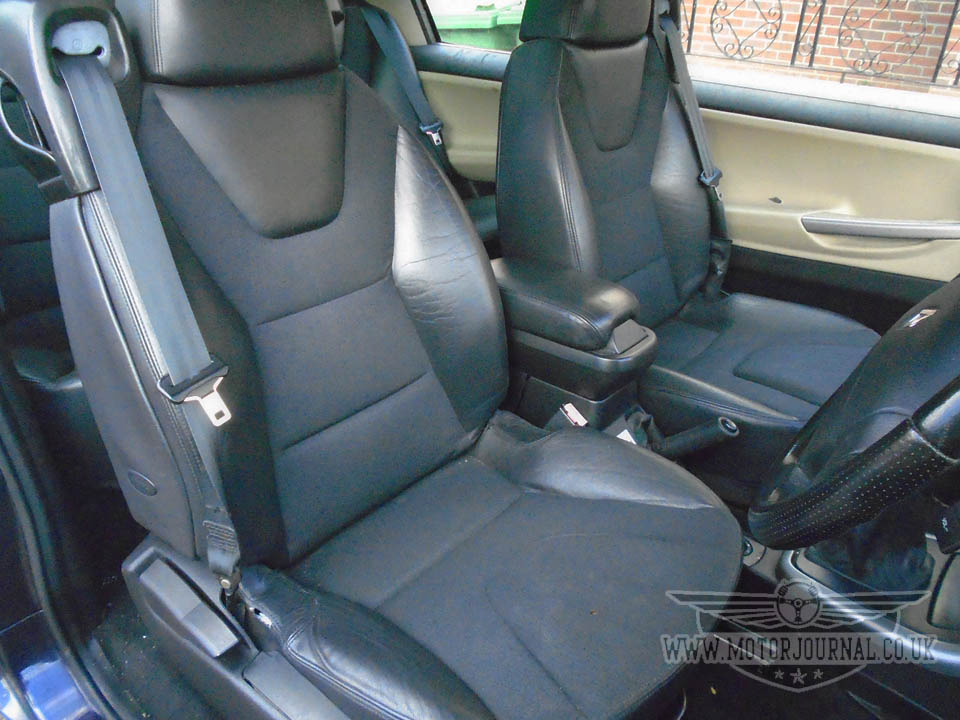 They are big, they're big enough for even the largest of arses, just ask Mrs Clint, she'll tell you... Of course, then she'll probably beat me to death for saying she has a big arse, but there you go! Dont get me wrong, I think the seats in the Navara are pretty comfy, and if the truth be known, the Navara would've been the better choice of vehicle for todays activities, but I figured I probably had the best part of four or five hours of seat time ahead of me, and I thought that the almost armchair-esque seats of the Avantime were the way forward.

The mission went well, just under two and a half hours after leaving BelongaClint I was loading four 16" Navara alloys wheels into the back of the Avantime, and now I could meander back across the countryside collecting the other items I needed to pick up. When I'm doing multiple collections like this I like to pick up the one furthest away first, as that way I know that no matter what I pick up next, I am on the way home. By about 16:00hrs I was starting to get a little bit peckish, and so I started to think about finding somewhere to have a bite to eat. I'm not a huge fast food fan, but for a couple of days now I've had a hankering for a burger. Now for me, I find McDonalds food to be averagely average, If I had to choose between McDonalds and Burger King, then the King always wins, although I do wish they sold milkshakes! The more I thought about it, the more I thought that I really did quite fancy a Whopper! Again, if it was a choice between Big Mac and a Whopper, the Whopper would win simply because they seem to be bigger, still, they'd be even better if I could wash them down with a nice cold Vanilla milkshake! So now I was on the lookout for somewhere to eat. I passed a few McDonalds resturants, and was almost at the point of going into one, but then, somewhere just outside of Guildford (I think) I saw a Burger King in some sort of little retail park. I pulled in, and before long was sitting inside tucking into the first thing I'd eaten since my porridge this morning. 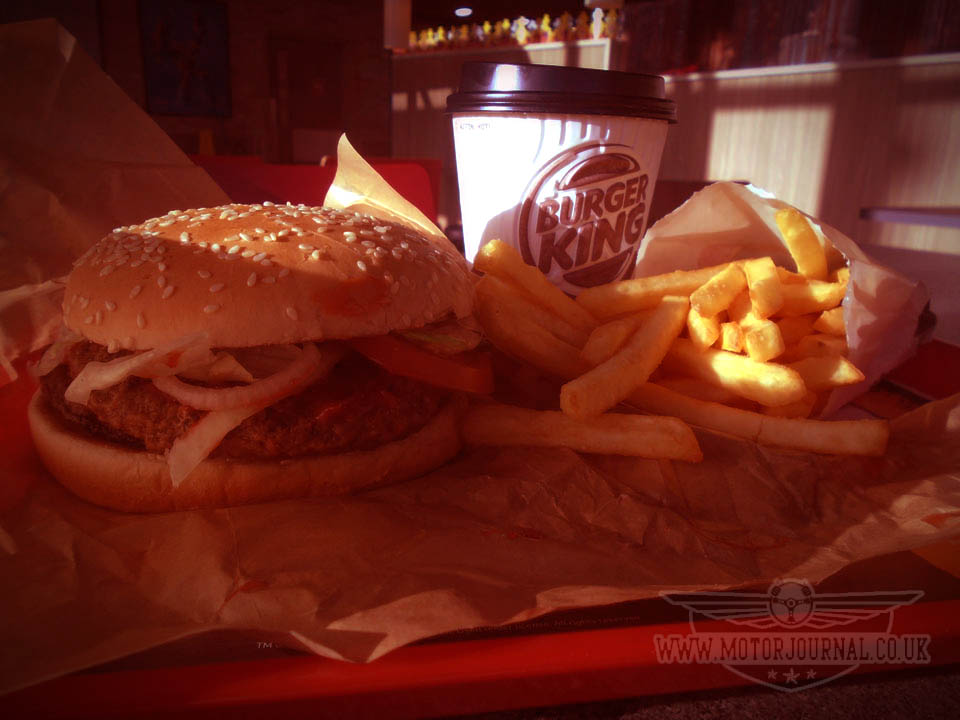 Make no mistake, I was bloomin' starving! So starving that I actually went for the Double Whopper, I eagerly headed to a seat by the window so that I could enjoy the view of my Avantime while I ate. Pretty soon I was half way into my Whopper, thinking that making it a double was a mistake as the added patty seemed to make it want to come apart in my hands all the time and I was getting in a right mess. But as I sat there chucking my burger in my lap instead of into my mouth I was watching a fella outside in the car park photographing the Avantime from all angles. He seemed pretty well into it, but eventually he stopped taking pictures of it, and also came in to see the King. I watched as he ordered his food, and then start to look for somewhere to sit. As he walked past me I said, So you like my Avantime huh? He asked me if it was really mine? I told him that it was. Then he started to talk to me about it, and how he had always promised himself one some day! After about five minutes of him standing there talking to me and holding his tray of food that was no doubt getting cold I asked him if he'd like to join me. He decided to join me while he ate his meal, and talk about Avantimes, and old interesting Renaults in general, saying that he had owned several Espaces, Fuegos, and 25's. He went on to say that at the moment he was driving a Vel Satis, but despite wanting an Avantime for years, they had always eluded him, apparently much like the mk1 Twingo. He seemed to be a real Renault fan, and I told him that the Avantime was only my second ever Renault, my first one being a mk1 Twingo. By the time we had finished chatting my food had all been eaten, my coffee had gone cold, and the sun had set. I hate this time of year, wasn't even much past 17:30hrs and already it was pretty much night time!

Anyway, as I cleared the fallout from my Whopper meal into the bin he asked me if he could have my number. I chuckled (nervously) and said that although I had quite enjoyed our chat I wasn't that kind of fella! Thankfully he laughed too, and said that he was interested in buying an Avantime, and wondered if he could try and buy mine. I thought about it for a moment, and then said, well, if the money was right, he could probably buy mine, and I asked him how much he'd like to pay for mine? He hit me with what he thought was a fair figure, and to be fair it was about £500 less than what I had paid for it. So I told him that his figure was a bit low for my liking, but if he'd raise the ante by just £500, and not a penny less, then he would be in with a fighting chance of owning his first Avantime. He thought that this was a little too much at this time of year,  but he said he would think about it, and see what he could do. I gave him my number, and headed off to the car park. 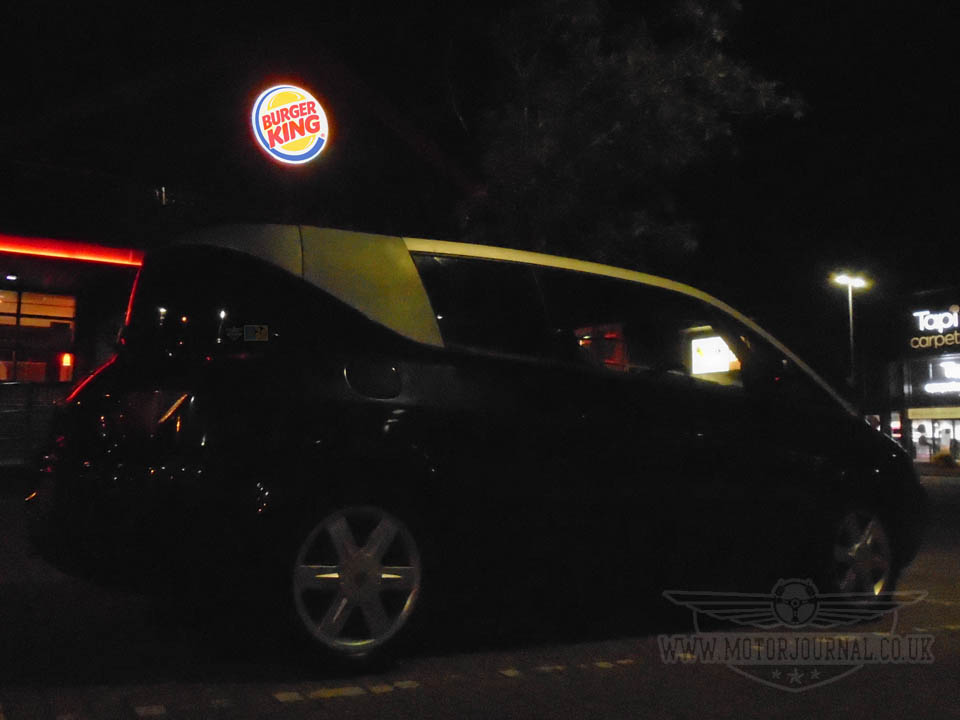 As I left I saw him getting into his Vel Satis, and he waved as I passed him. I waved back before joining the traffic and heading for home. I thought about selling the Avantime a lot on the journey home. I thought about how I don't want to keep it forever, but have I kept it for long enough yet? I also wondered if they had become a classic yet, or was it just on the cusp of it, and no doubt would become a rare cult classic in a short time. Probably just after I sell mine, and they make a big jump in value. But then, does that matter? Does it matter if I make no profit as long as I don't make a loss? To be fair I am usually happy to just break even, and if I'm happy to break even then this fella would probably be the best next custodian of the Avantime that it could have, he's obviously into it. I dunno, and I don't really know why I'm thinking about it. I mean I've talked to quite a lot of people in the past who have been interested in buying cars from me, and for the majority that is where it ends, we talk, they take my number, then I never hear from them again. So who is to say that this isn't whats going to happen here? Although, they generally don't seem to be into their brands like this guy was, and they generally dont stand there taking loads of pictures of the car either. I guess time will tell, and if it sells, then it sells, but if it doesn't, then thats OK as I'll just have more time to spend behind the wheel of this magnificent beast watching the world go by through those massive windows!