November 14, 2019
It seemed like forever since we had painted the bed and chassis of my little Hot Rod, but with the tonnue cover finally finished I was at a point where I thought that the bodywork was ready to be completely covered in Fiat Blu Sprint paint. 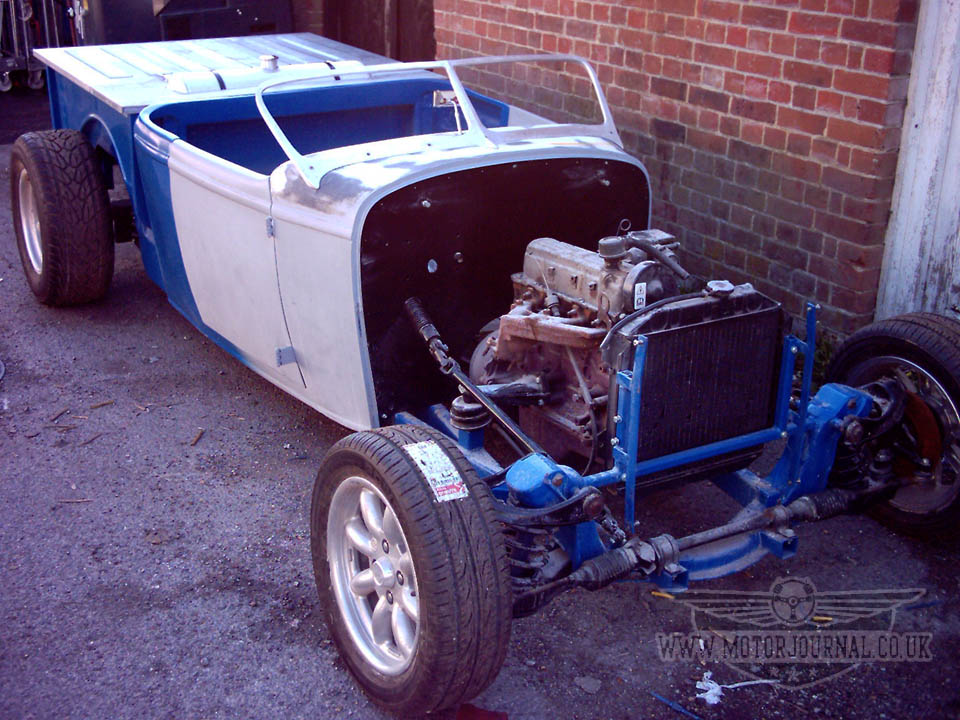 I was wrong of course, but the thought was there! The thing was that I had bought myself a replica of a DuVall style windscreen. It was flippin' expensive, and it wasn't even what you'd call a good replica. Infact, I reckon that if I was given a block of aluminium, and a grinder I could've turned out a better replica! To say it was as rough as nuts would've been the understatement of the year. Anyhoo, twenty odd years on, I'm over it... Nearly!

Anyway, we shaped up the bottom of it so that the curve was even and symmetrical all the way across for what we thought would be the best fit. Then we had to do the same to the top of the cowl. Remember, this was a low budget body, and in places this showed, and the top of the cowl was a bit wibbly-wobbly to say the least! Plus, as we'd already shaved the ridge that the proper '32 Ford windscreen would've butted up to off, and filled in the faux cowl vent. In doing this we'd made an already wibbly-wobbly panel even wibblier and wobblier! I'm sure by now, if you've been following along with this build you know the drill. The cowl required filling, sanding, filling, sanding, priming, sanding, filling, priming, filling, and sanding for nights on end! 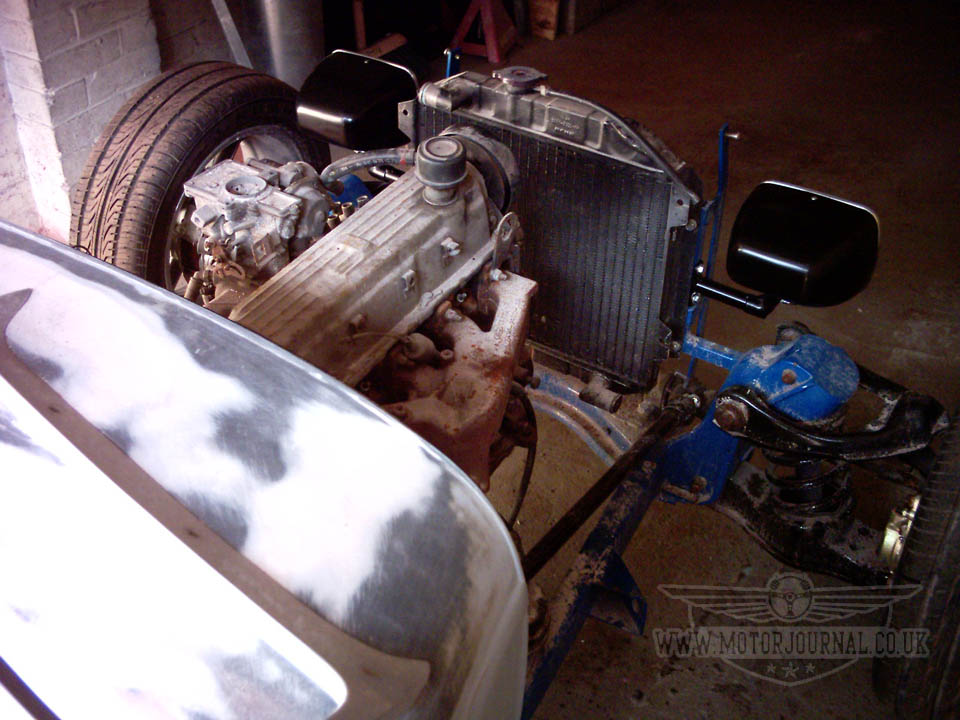 M.R. told me that while he left me to do that, he would take the bonnet, and sides into work, and do it all there. 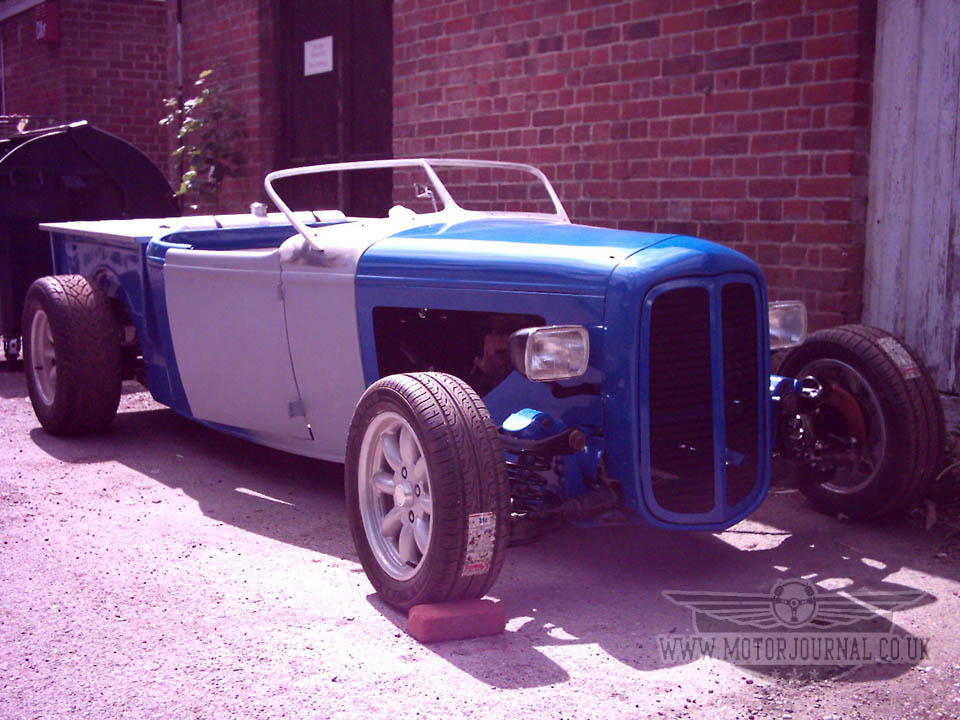 Long before I had finished finishing the cowl, M.R. was back with the grille, bonnet, and bonnet sides. We put them on and popped the windscreen in place to see how it looked... 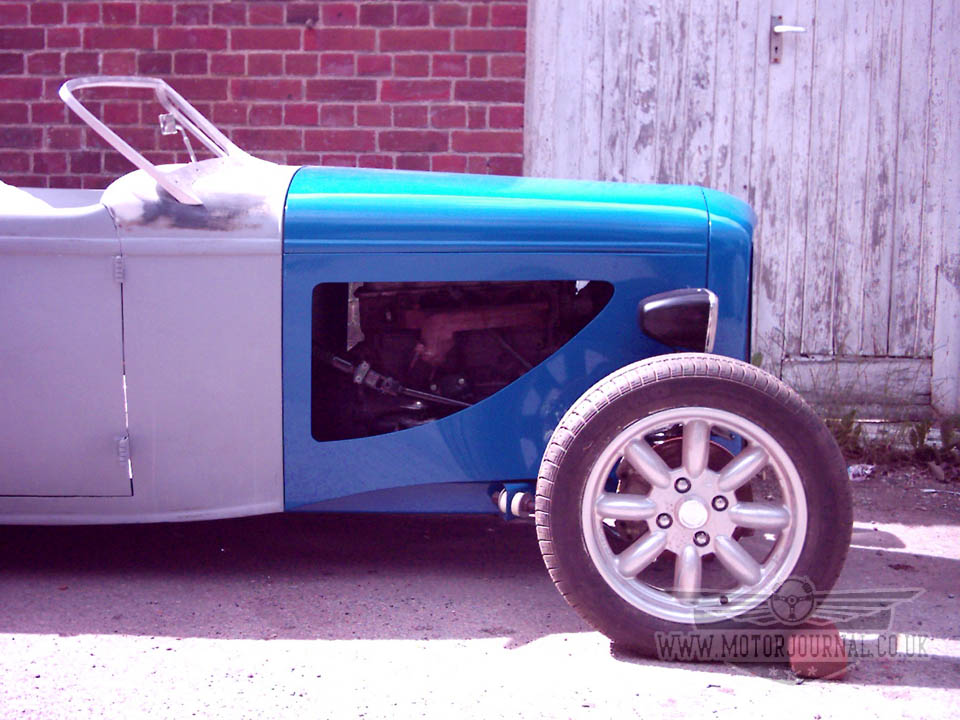 It looked good! I must admit I had my reservations about the shape of the holes cut into the sides of the engine cover, but now they were painted I thought it all looked pretty sweet! Seeing it complete like this gave me a bit of a boost, which was much needed. Spending all my available spare time building this thing was really taking it's toll. It wasn't just a huge financial drain on my bank balance, but it took up all my time. If I wasn't at work, or asleep I was in the garage building this thing! By now I had lost countless girlfriends, although, thinking about it I have no idea how I found the time to meet them in the first place anyway! My friends had even stopped comming around to my house to see me, the ones that really wanted to see me just turned up at my garage! I really should've sent out change of address cards!

So with my morale boosted we took the front back off, and over the next few evenings, we gave the cab a final rub down to prepare for paint! With the cab finally in a state to be painted the Hot Rod was pushed outside the garage, and we gave it a good wipe down with a tack-rag, the floor of the garage was then soaked with water before we pushed the Hot Rod back in. Then, as night fell I took up sentry duty in the alley, while M.R. sealed himself into the garage and fired up his spray gun! Before long I wasn't alone in the alley, I was joined by our local friendly Policeman. He pulled up in his patrol car, winding his windows down, and greeting me on a first name basis before just saying, "Painting?" I said, yeah, this should be the last bit of painting to do! He looked at the garage door, looked at me and said, "Hows it looking? Is it nearly finished?" I said that the bodywork was pretty much there, but there would still be loads to do once the bodywork is painted, but it looks pretty good so far! He said that he'd like to take a look, but his lungs hadn't recovered from his last dose of blue cellulose fog! He looked at the door again, and then back at me and said, "You know, I still haven't checked into seeing if what you two are up to is legal or not, I should get around to doing that!" I laughed and said that he shouldn't bother, we were nearly done with out late night paintwork, and he didn't really need the paperwork! He chuckled, said see ya later, rolled up his window, waved, and headed off into the night!

A couple of hours later M.R. emerged. Through the blue haze and the gloom of our dim fluorescent lights the Hot Rod looked pretty damn good. I wanted to wheel it out right there and then, but in all honestly I could probably see it better insde the garage than I would've been able to in the darkness of the alley! We turned out the lights, locked the door, and headed off in different directions to our homes! Getting home and showering at 03:00hrs is a bind, not only had I done a full days work on site, but also the best part of two work days after work on the Hot Rod. Showering all that crap off before going to bed, only to get up 3 hours later to start it all again was starting to get old! The nights that I got into bed thinking if there was really any point as I'd be getting up in a couple of hours were really stacking up. Night after night I struggled to get to sleep, wondering if all the work would be worth the end result, and this night was no different! Except, this time I was wondering just how good it would look the next day!

Before long my alarm clock woke me from my slumber, as I beat it into submission I seriously considered whether or not I needed to go to work. I decided that as the Hot Rod was emptying my bank account faster than I could fill it I should go in! I struggled through the day, and ten hours later I was back in my garage, wheeling my freshly painted Hot Rod out into the bright sunshine... 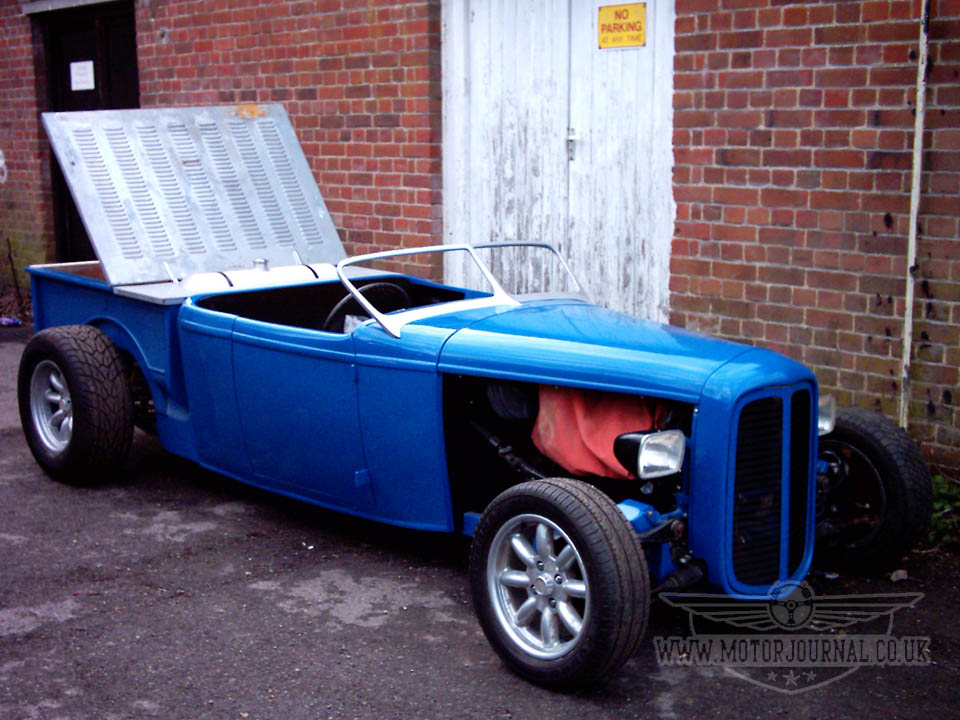 It looked fantastic! Although the tonnue cover was still unpainted, and so was the tailgate. I asked M.R. why, and his answer was simply that he didn't think he had quite enough paint to cover it, so it would be removed at some point, and he'd take it into work to paint it. I thought, thank goodness for that. I really didn't fancy standing guard duty in  the alley for another night, what if our friendly Policeman had checked up if what we were up to was legal or not, and what if it wasn't? I was fairly sure it wasn't, and I was fairly sure he knew so himself, but was just cutting us some slack! Friendly or not I didn't really want to try my luck, and push him over the edge!