August 14, 2019
With the back of my little Roadster pick up looking something like how I wanted it to look, we turned our attention back to the front while I decided on a set of tail lights, and what I wanted to do with the tonnue cover. 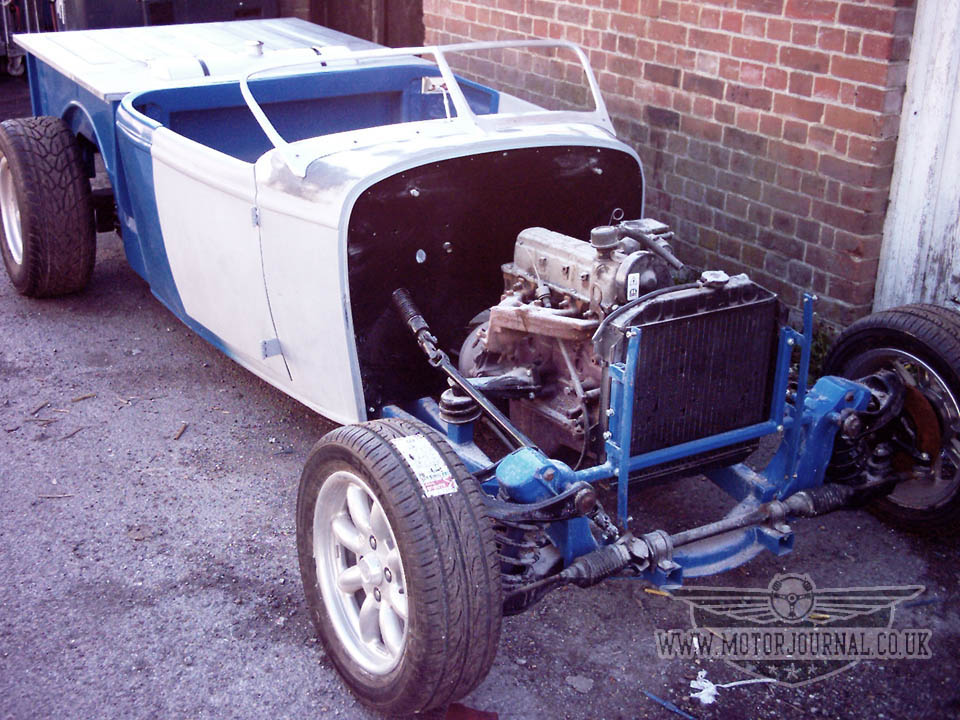 The grille shell was already chopped down, and sorted out, but because I was coming under constant critisism for having the wrong engine, a, I4 not a V8 I thought about hiding it away a bit. I knew that I never wanted to run it without a bonnet, but I thought for a long time about having the sides covered in as well. I figured that wether I was parked or driving along, with the sides covered in you'd not know what engine I had in there. Trouble was, I didn't want just flat bonnet sides, as I thought that it would just look like I'd pulled the side of a refrigerator, and bolted them on or something! Didn't really want louvres either, everyone has those! That left me thinking about putting some sort of scallop in the sides, but for me that seemed a bit too 1980's Hot Rod, and that wasn't really the look I was going for. I guess at the end of the day what I really wanted weas open sides. The HotWheels toy car that I was loosly basing my HotRod on had a bonnet, and open sides, but of course that also had the 'right' engine. A V8!

After getting hold of a pair of flat sheets of fibreglass M.R. and I attached them to the side of the bonnet so they hung down and covered the engine. As I had expected, it just looked completely wrong and featureless. out came a marker and we drew some shapes that might be suitable for the look I was after. 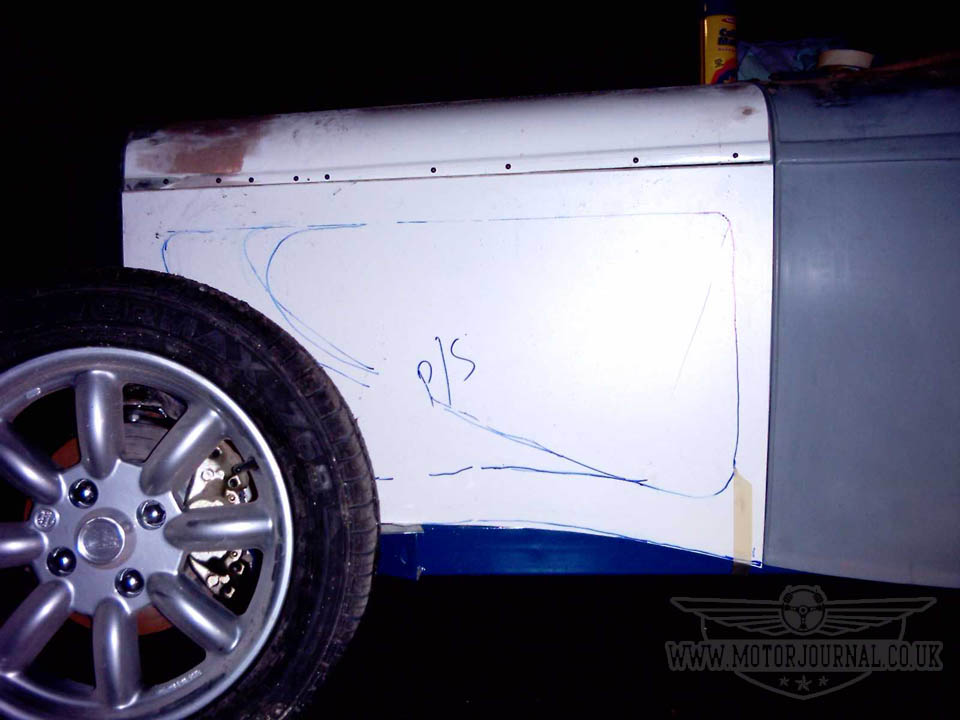 Before commiting the Jigsaw to the bonnet sides I left it a couple of days to see how I felt about it. I was still pretty sure I wanted it open, but I was coming around to the idea of having sides with holes in.

M.R. and I talked about it, he agreed that the sides should probably be open, but it would still be better with a V8 or V6 in there on show. After a little debate,  and more marker drawing on the side it was time to break out the Jigsaw. Before long it was too late to go back... 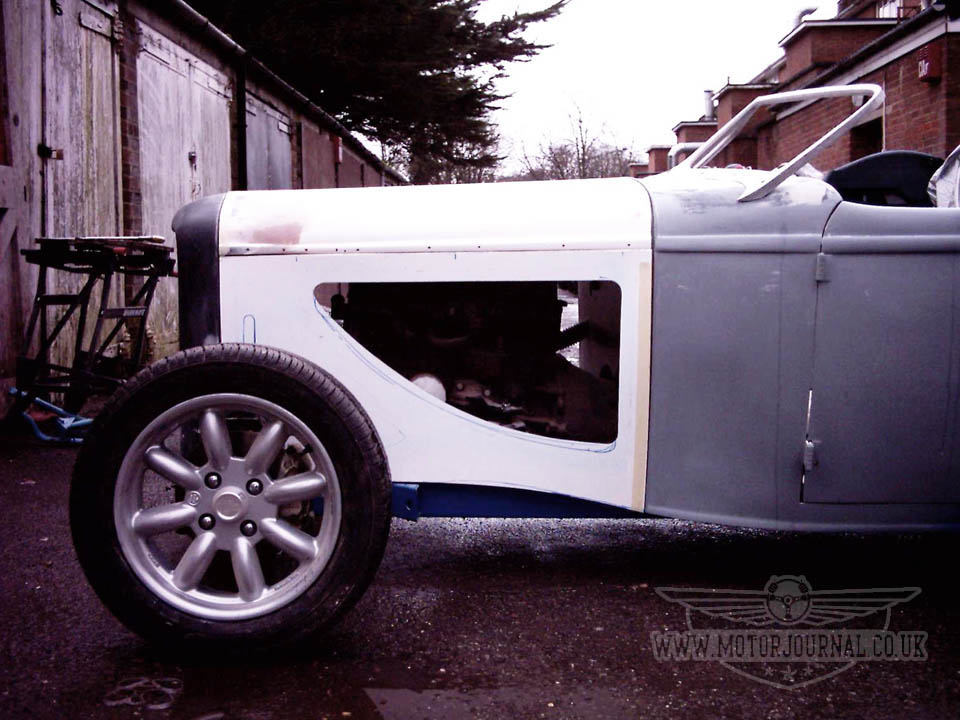 We had decided that the hole needed to have a curve to some how echo the curve at the bottom of the body and bonnet side. But it also needed to be straight at the top and back to match up with the body lines it would be mating up to. 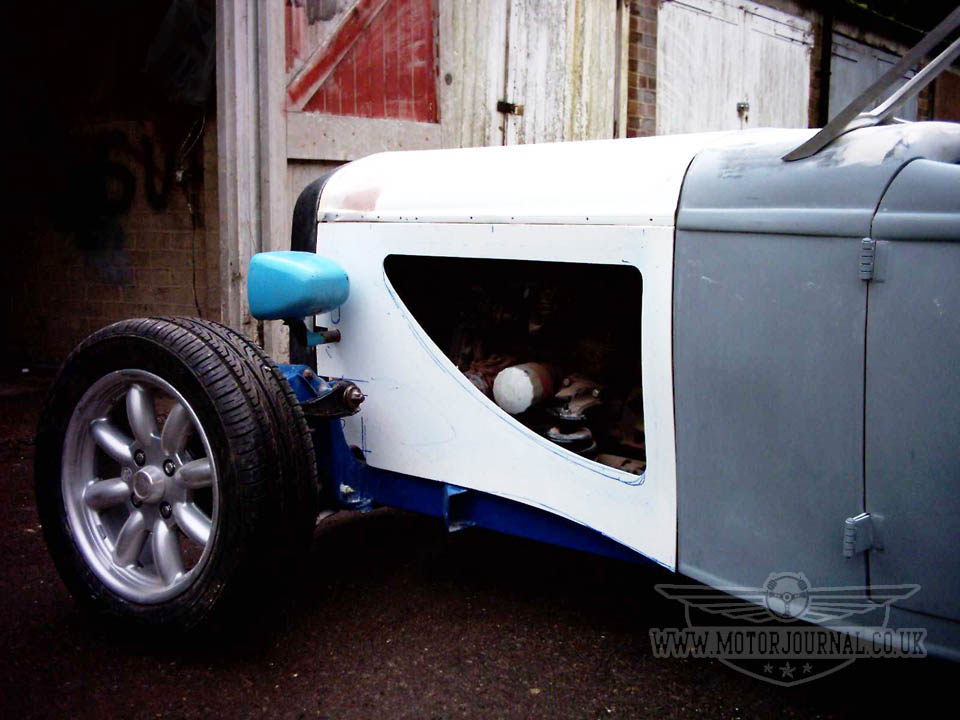 As much as I liked the sides open, I felt this was quite a nice compromise, and actually I was pretty glad I tried it. I figured that I then had the option to either run with the sides open, or slightly covered in. It was then time to turn our attention to the headlights.

Originally I wanted to run two small round headlights from a Fordson Major tractor in the bottom of the grille, much like they are on the tractor. But I was told that they would be too far inboard, and so I would end up having to put something on top of the wheels somehow so that other road users could judge where the outsides of my car was in the dark. I didn't want to do this, as I didn't really want to run fenders, so couldn't think How I would mount them. I had to find another way to illuminate my path through the night.

The lights I chose instead were obviously wrong, but in my head they were right for the look I was after. I'd had the lights since the beginning of the project, and almost everyone (who had never done anything like this themselves) commented on how I'd got the wrong lights. The lights I should've been using were round, and about 7" in diameter, like all Hotrods have, but mine... 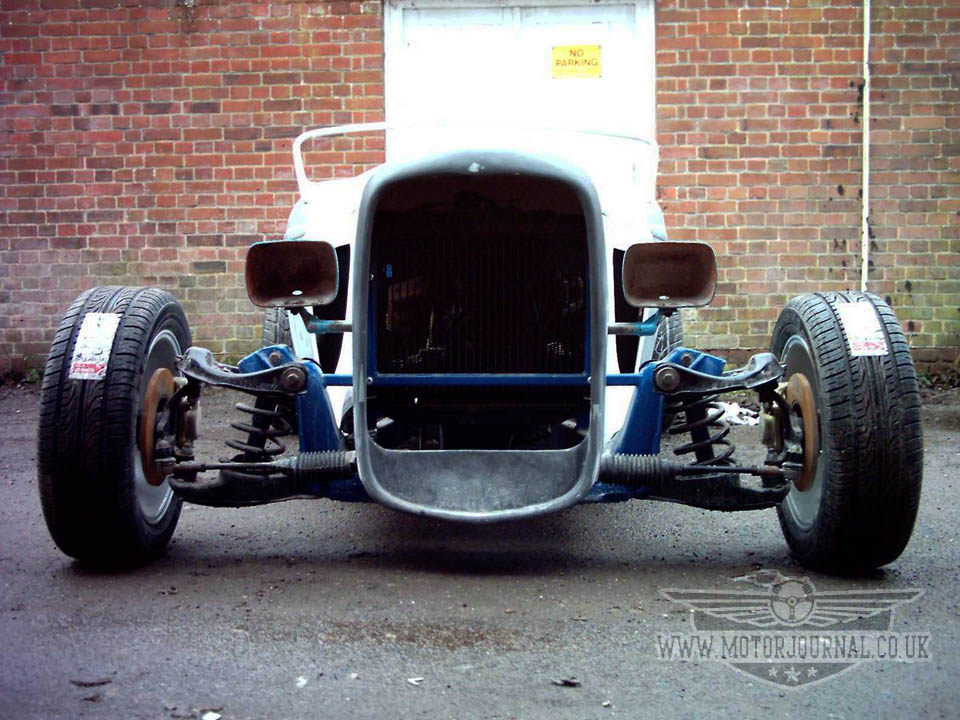 Are rectangular, and originally called a mid '70's Citroën 2CV home. I don't really know why I wanted rectangular headlights, but I knew without a shadow of a doubt that this was the look I wanted if I couldn't have small round ones in the bottom of the grille. With the original Citroën 2CV headlight mounts chopped and bolted to the radiator suppport I thought it looked pretty cool, even though the lights didn't have lenses in them. 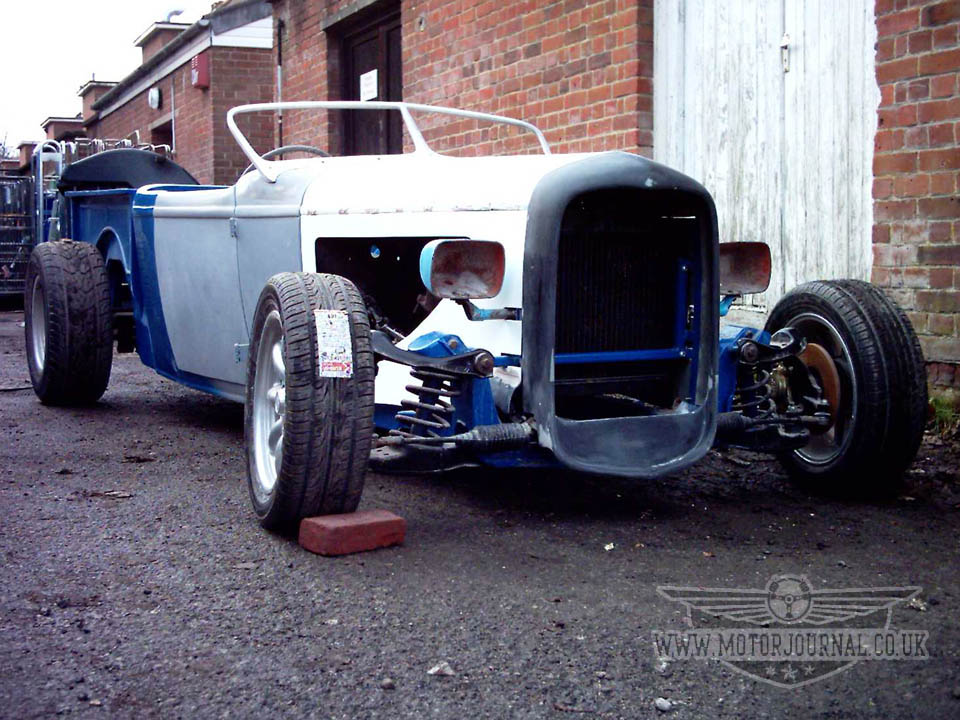 With the grille shell, lights, bonnet, and sides back on we stood back to take it all in. I was pretty happy with how it was looking, and although still not 100% sold on the bonnet sides I thought that atleast they didn't look out of place. Now all I needed to do was create some sort of grille to fit in the shell, and paint the front.