July 16, 2019
With the grille and the front of the Hot Rod beginning to look like how I thought it should look, I decided to turn my attention to the bed of the thing. 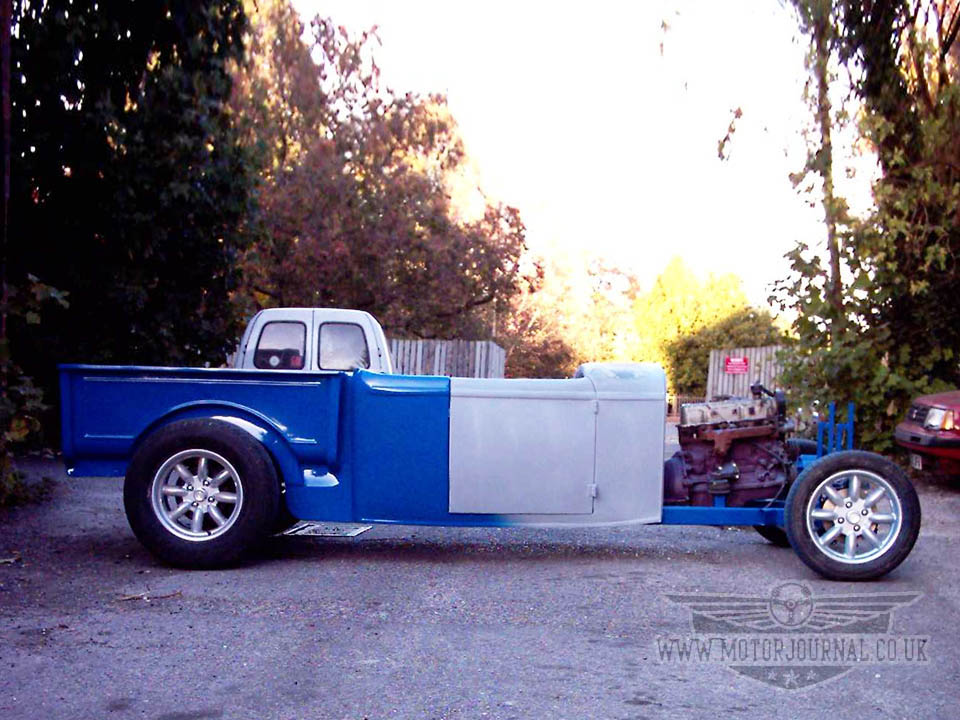 The reason for the shift of attention from the front to the back was because I had by now been storing several items in my garage that were going to be fitted to the bed, and so, in order to save some floor space so that we could move about the garage more easily, I decided to fit them to the Hot Rod.

We had discussed for ages, where I was going to have things like the fuel tank, and the battery. The obvious answer was to put it in the bed. But the problem with this was that I didn't really want stuff in the bed. But in all honesty, where else could it go? The other thing was, what was I going to use for a fuel tank? Several ideas were talked about, like just using the original one from the kit car, or one from a Cortina or something. The problem with these were that they were ugly. Then we had the idea of using a couple of steel jerry cans, and although I quite liked that idea, I didn't feel it was the right look I was after. The last idea was to use a beer barrel. However these are quite large and, after liberating one from behind the pub, we found that it dominated the bed, plus, as I wasn't building a Hot Rod in the seventies, the idea was also dismissed, and we put it back. The thing is though, I quite liked the idea of using a cylindrical tank, so the hunt was on to find something suitable. That something suitable came to light after finding an advert for a spun aluminium MOON fuel tank in the back of HOTROD magazine. I phoned MOON equipment in California, and enquired what size tanks they did, and if they could sell me one and ship it to the UK? They could, and for a couple of hundred pounds, two weeks later my new petrol tank had arrived in my garage! 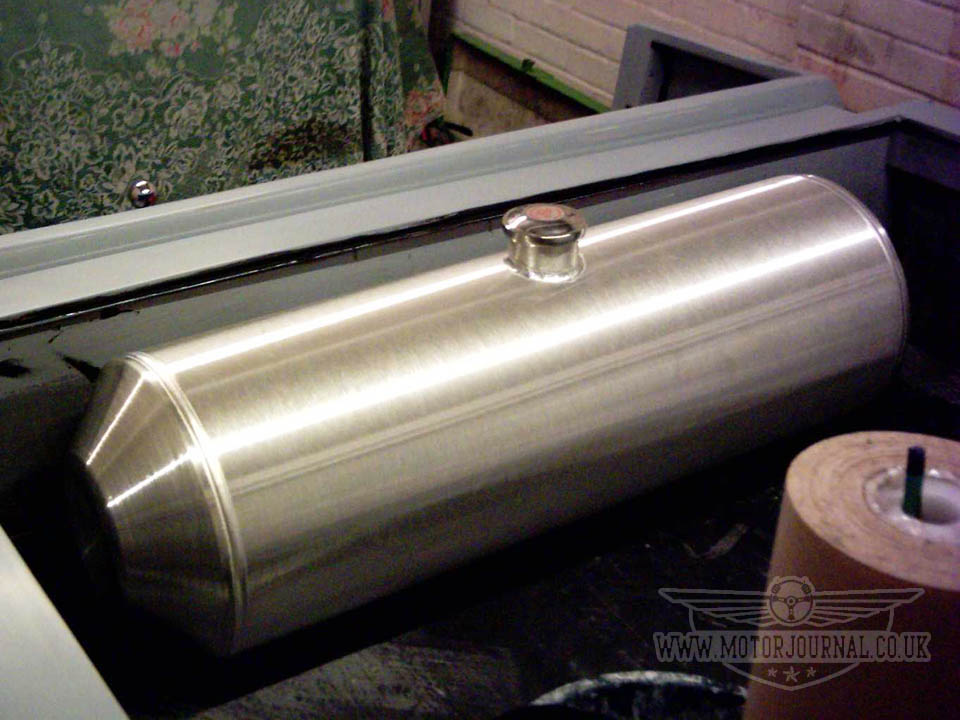 It was pretty quickly decided that the place for the tank was at the back of the cab, in the front of the bed. We raised it up on blocks so that about a quarter of the tank could be seen above the top of the bed.

Attention was then turned to where we should house the battery. I really didn't want to see this in the bed at all, and so we decided to put it in the floor of the bed. 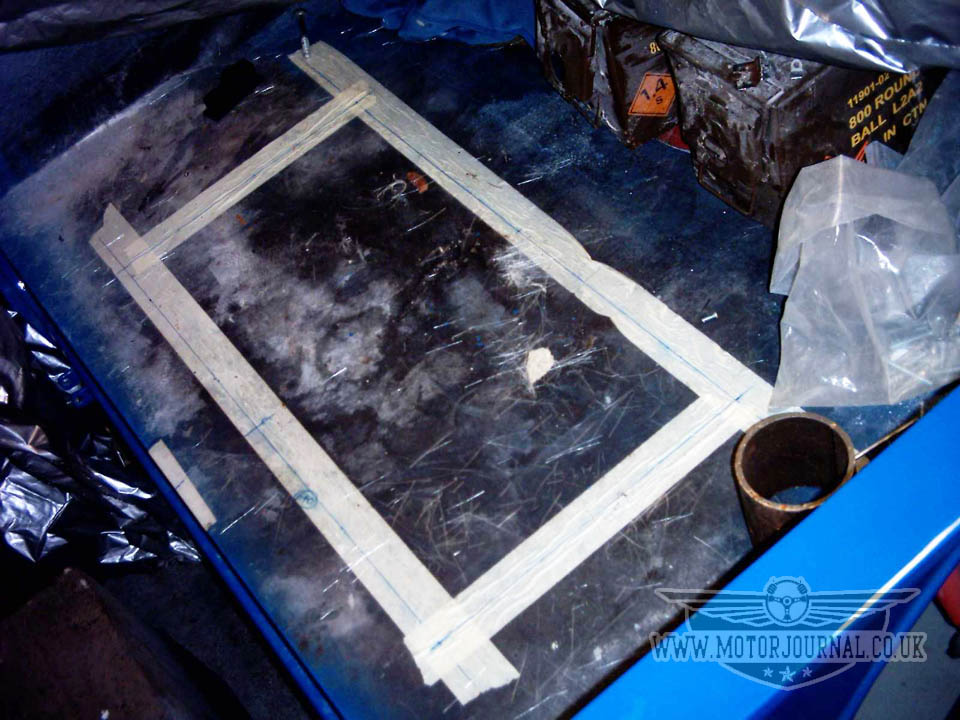 I marked up a large area at the rear of the bed, then checked underneath to make sure that I wasn't going to chop a chunk out of the chassis or anything. Then it was out with the jigsaw and several minutes later... 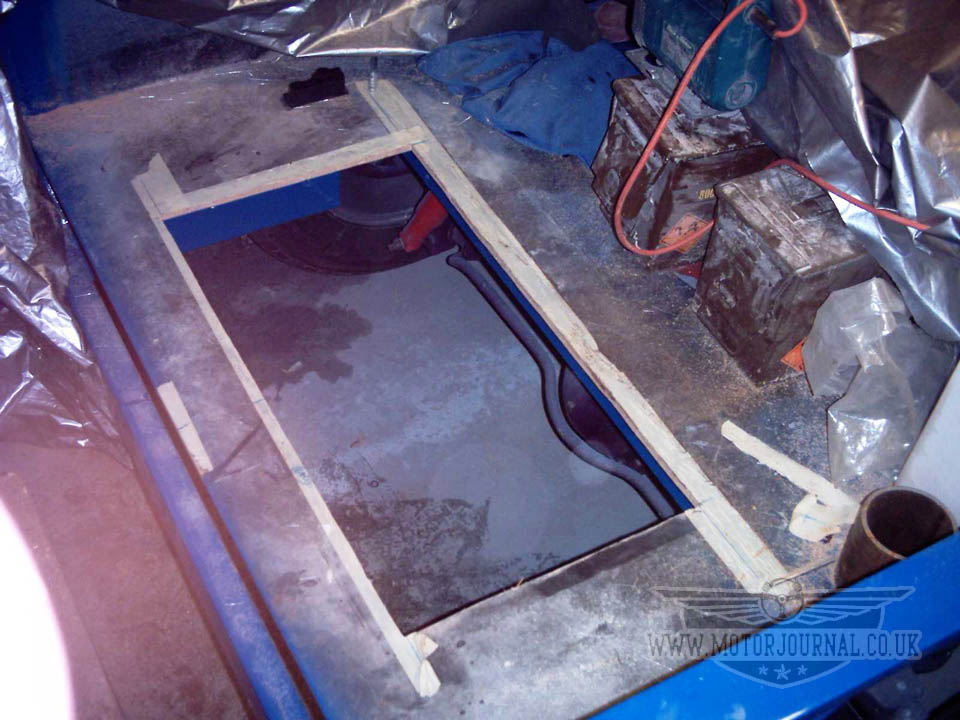 The bed was ventilated! It was at that moment that M.R. wandered in, and wondered why I'd chopped such a huge hole in my bed. I told him that the reason was that it was for the battery, and I was also going to store and couple of boxes in there, one with tools, and one with other stuff like the jack, oil, and water. He thought that probably wasn't a bad idea, and so after a quick measure up, we turned our attention to fabricating a large steel box. A couple of hours or so later it was done... 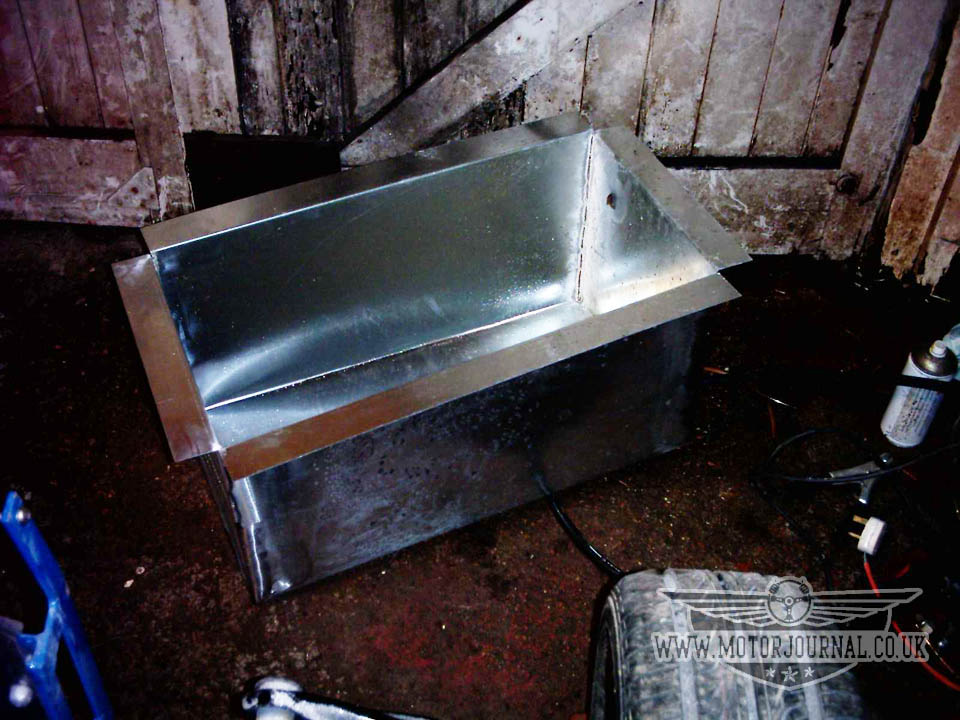 Admittedly we had to sneak into M.R.s place of work late at night to use their sheet metal folder, and perhaps use their sheet metal as well. But sometimes you've gotta do what you've gotta do! Besides, I'm sure that they would've wanted to help a couple of guys building a couple of Hot Rods in any way they could! Anyway, It was a bit wibbly-wobbly, so M.R. welded up the corners to make a complete box, and we headed back to the garage to fit it. 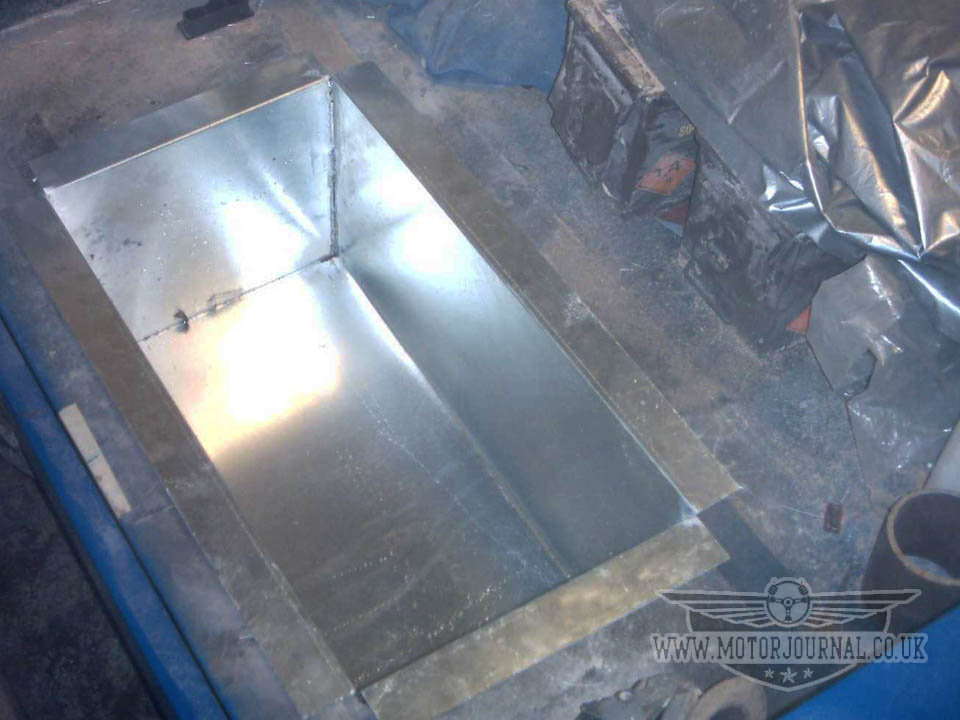 To be fair it was still a bit wibbly-wobbly even after it was welded up, but once it was in the hole, it felt a lot more sturdy! Once it weas checked for fitment, it was drilled where it needed to be, then removed from the bed, and was on it's way back to M.R.s workplace for a good powder coating!

While that was getting done we turned our attention back to the bed. I had decided that I didn't actually want the bed to be open, but it needed some sort of tonneau cover. Initially the idea was that we would just put some sort of canvas across it. But I felt that might just look a bit rubbish. My friend, P.C. had a plywood cover, that was upholstered in padded white vinyl on his Hot Rod, and actually I quite liked that look. But, knowing that we had access to a sheet metal folder (and sheet metal). I knew that it was going to be a metal tonneau. 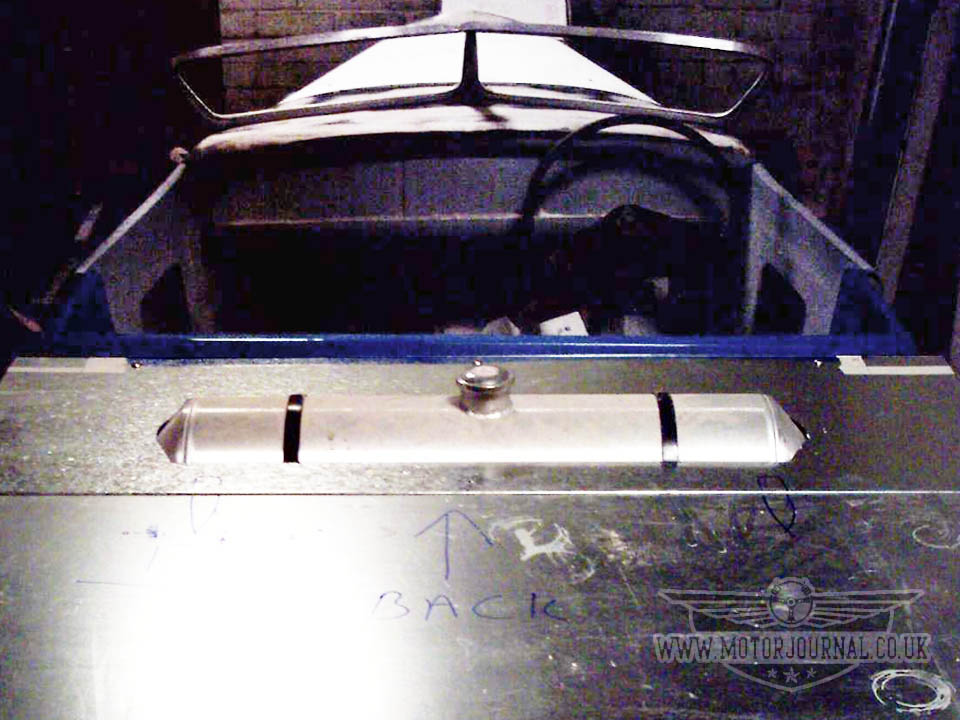 It was decided that the tonneau would be in two peices with a hinge in between. The front bit would cover most of the MOON fuel tank, but the tank needed to poke out through the top. We folded the front bit up quite quickly, and then spent days on end carefully cutting out the hole for the tank, trying it, and nibbling away a bit more, and trying it again! I wanted it to be a perfect fit, and after nibbling away at it, then running a bead of weld where I'd cut too much out, before having to nibble it into shape again seemed to go on for days on end! Infact this fine tuning of the hole actually went on for weeks, but when it was finally done, I thought it looked perfect. The hole was snug to the tank, and the tank poked through the hole just the right amount. 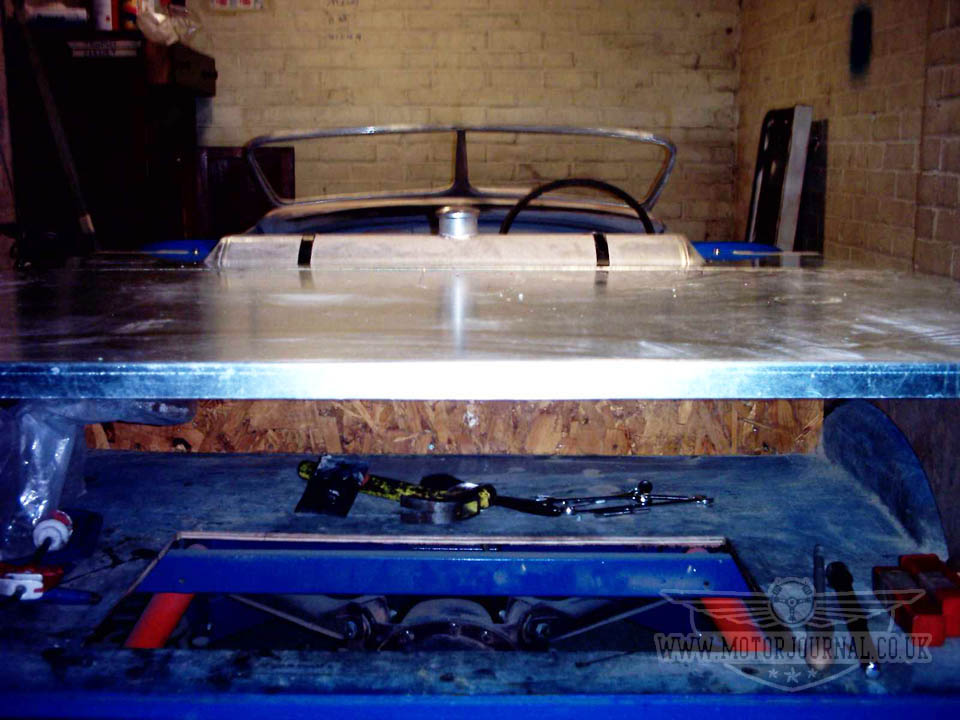 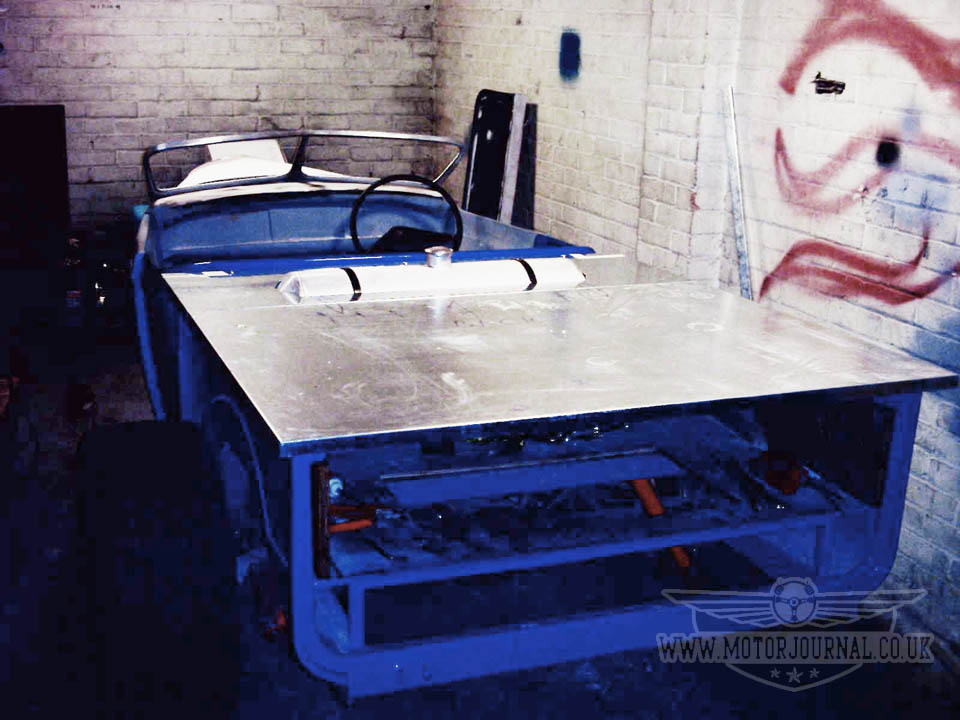 By the time we had finished I was pretty happy with the results, although I felt that the huge expanse of flat metal that the tonneau cover was looked more than a little plain. I wondered what I could do to break up this featureless piece of flat metal. I thought about having it painted satin black with pinstripes. Or having some sort of chrome strips running along the length of the tonneau. Or maybe just have it bead rolled. I wondered if any of these ideas would look good if it was painted body colour? We talked about it a great length, but as much as I knew it needed something, everything we thought about I didn't really like the sound of. In the end, we left it unpainted while we worked on other areas of the Hot Rod so that I could hopefully come up with some sort of idea about how it should look! Inspiration did finally come, but it took the best part of three months before I was ready to commit it to the Hot Rod.