June 19, 2019
Since the Hot Rod was now moveable again we decided that with the front of the cab pretty much done we would turn our attention to the bed. 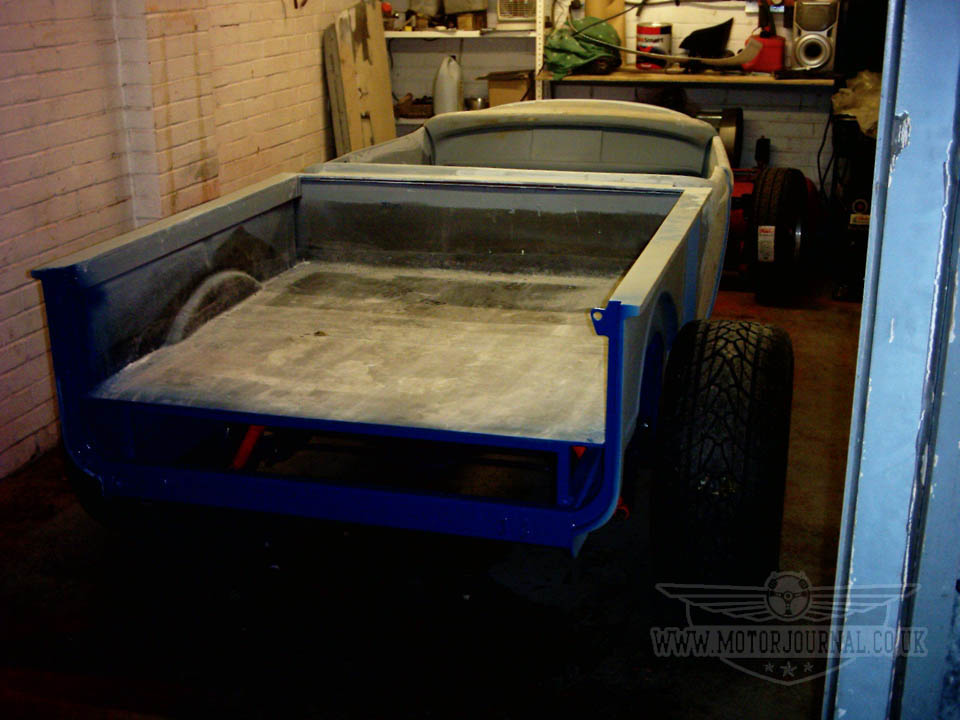 The outside of the bed, being basically flat I thought was going to be a piece of wee wee to do. But of course, much like the front of the cab it had plenty of imperfections. For the best part of two months we were sanding, filling, sanding, and filling. Honestly, I have no idea how guys do this for a living, I found this to be so tedious it was unreal. I really felt like it was some sort of punishment for a crime I didn't commit. But as bad as I felt it was, the bed probably was a lot quicker than the front of the cab. My feeling was that as the sides of the bed were basically flat it would be a doddle, but as it turned out, because they were basically flat this made any imperfection more likely to be seen once the shiney paint was applied. 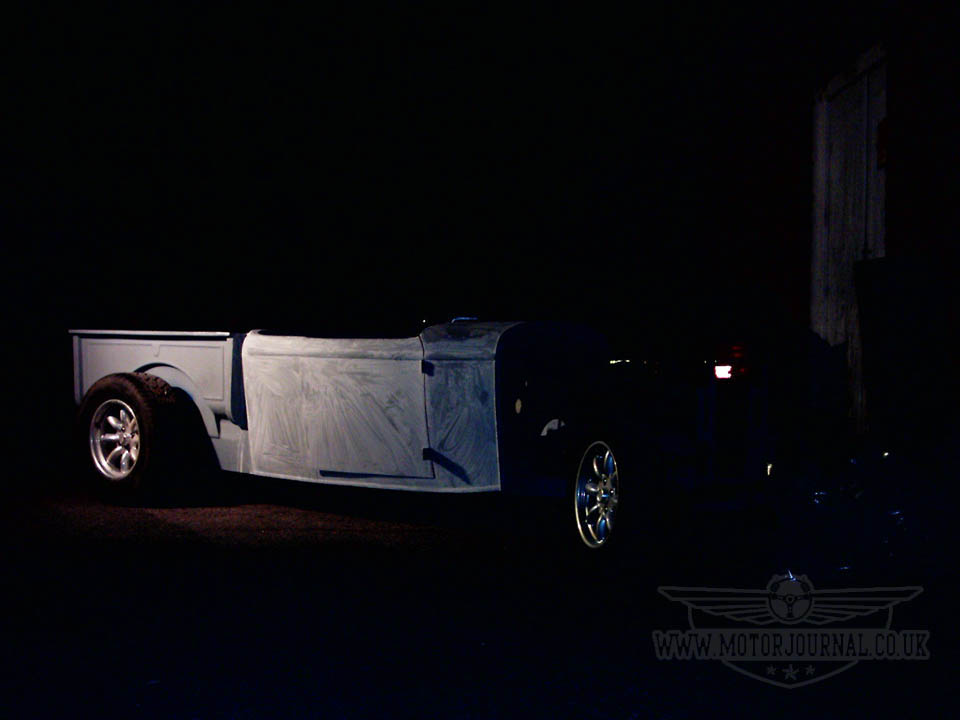 But after what seemed to be an eternity we were ready for some shiney paint. As ever, this meant working late into the night. With all the primer wet sanded during the day, as the sun started to drop below the horizon we started to wash, dry, and then go all over the back of the body with an alcohol soaked rag. The Hot Rod was then pushed back into the garage, and we went home for a couple of hours... 01:00hrs... And it was a work night, we were back. The Hot Rod was pushed outside the garage, and we gave it a good wipe down with a tack-rag, the floor of the garage was then soaked with water before we pushed the Hot Rod back in. The idea of this was that it would keep any dust that was on the floor from becoming airborne once M.R. fired up his compressor and started to apply the Fiat Blu Sprint top coat of paint with his spray gun. 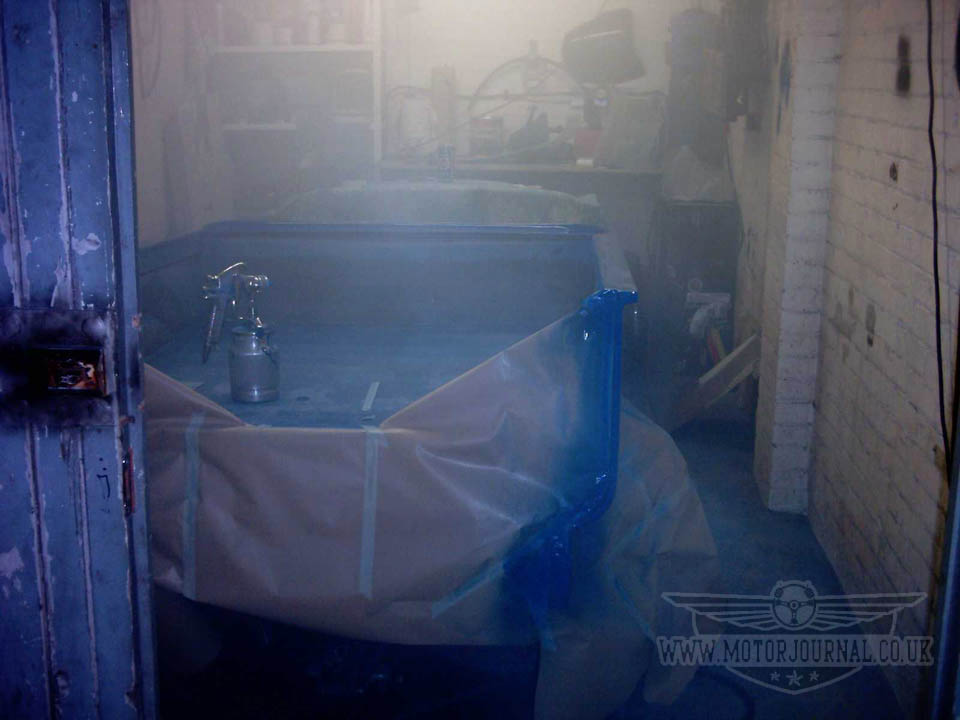 Before long I was back on lookout duty, stood in the alley while M.R. closed himself in the garage, and painted. It was then, while I was standing in the dark alley that a Police car pulled up. The Policeman got out of his car and walked up to me, I'd come across this Policeman numerous times before in my boy-racer phase, and generally, he was a pretty fair sort of fella, and, probably more importantly he was into cars and bikes. He greated me by name, and asked me why I was loitering in a dark alley at two o'clock in the morning. I responded by saying that I wasn't loitering, loitering is the act of hanging around in a public place without any apparent purpose, I have a purpose. OK said the Policeman, by now we're on first name terms, and he says, "What's your purpose?" I knocked the door of the garage, M.R. shouted through his mask, "Just a moment, I'm almost done" I looked back at the Policeman and said, just a minute. The Policeman looked at me and said, "What do you mean, just a minute, what are you guys up to? Do I need to run you down the station?" I said, of course not, that would be ridiculous, and in a moment you'll see what we're up to. With that, the garage door swung open, and M.R. appeared, his overalls slightly tinted blue with the airbourne paint. The Policeman looked in, M.R. took his mask off, and was then also greated by first name terms by the Policeman who then said, "Just what are you too up to in the middle of the night?" We explained that when we had sprayed in the day the neighbours had complained, and so, to avoid the complaints we decided to spray at night while everyone is asleep! The Policeman looked at me, looked at M.R. then looked into the garage. "Can I have a look?" he asked. M.R. said that he could, as long as he didn't mind the smell of cellulose paint. The Policeman wandered in, and quickly decided that the cellulose vapour that was still hanging in the air wasn't for him. We then had a chat in the clearer air in the alley. He had various questions about the Hot Rod, like whos it was, and what it was. Then he looked at M.R.s almost finished Hot Rod, and asked various questions about that too. He was pretty interested in the pair of them, and said that he would drop by at some point in the future to check on the progress of them. As he got back into his car he said that although he wasn't sure if what we were up to was legal or not, he was pretty sure it would be frowned upon by the local residents. But it was nice that we'd moved on from racing about the town in our rusty, crappy cars! He then waved us goodbye, got into his car, backed out of the alley and dissappeared into the night. 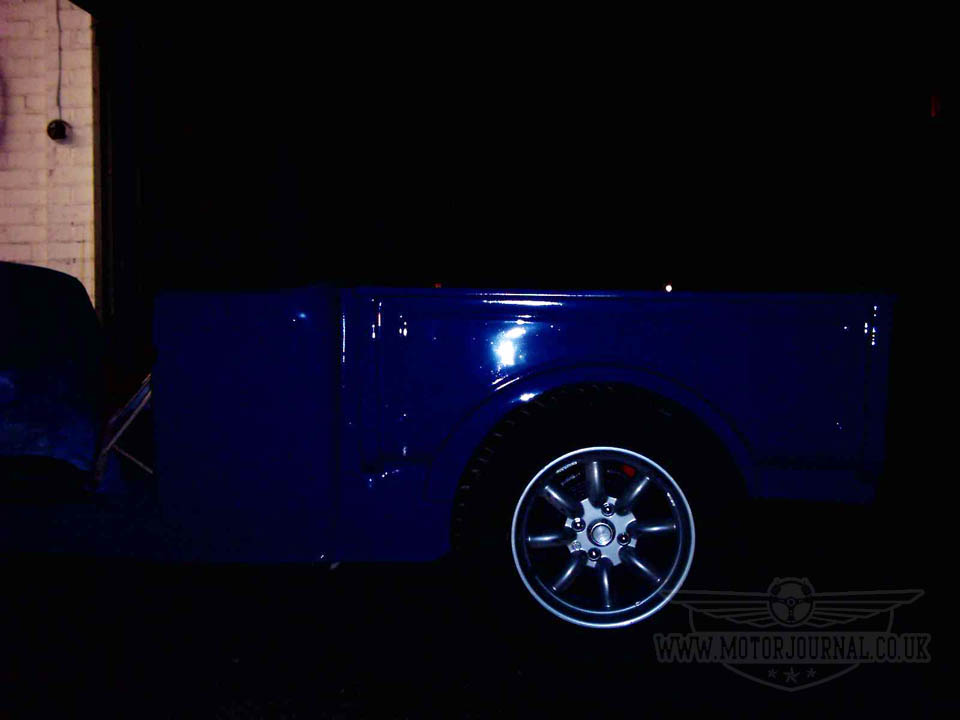 By the time he had left the Hot Rod was dry enough to be wheeled out into the night air. I knew I wouldn't be able to see much, but I just wanted to see it outside. I thought it looked pretty good, I took a quick snap, and  we pushed it back inside, closed, and locked the doors, then headed for home. 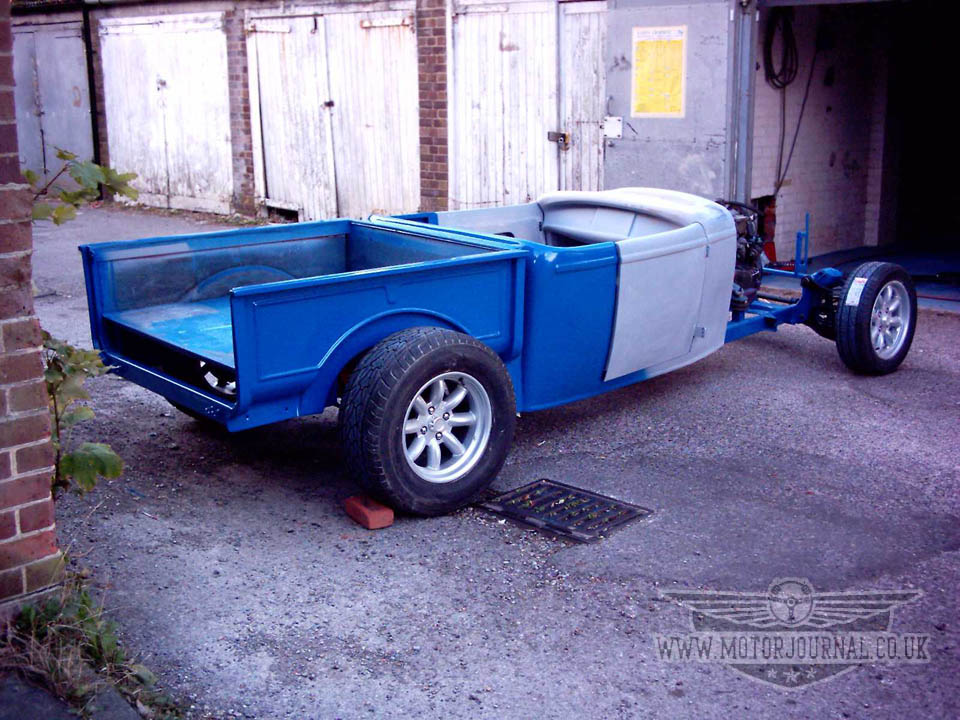 The following day we pushed it out into the daylight. It looked pretty good to me! M.R. cast his critical eye over it, "What do you think?" He asked. I said it looked pretty good to me, and then I asked him what he thought? M.R. said he thought we were in the poo last night when the Police showed up! But apart from that, there were a couple of areas he wasn't too happy with, but it was averagely average! He pointed out the areas that he wasn't happy about, and they were a small run low down behind the rear wheel, some 'dry' spray between the back of the cab, and the front of the bed, and some dust that had still managed to get blown into the paint around the bottom of the cab! 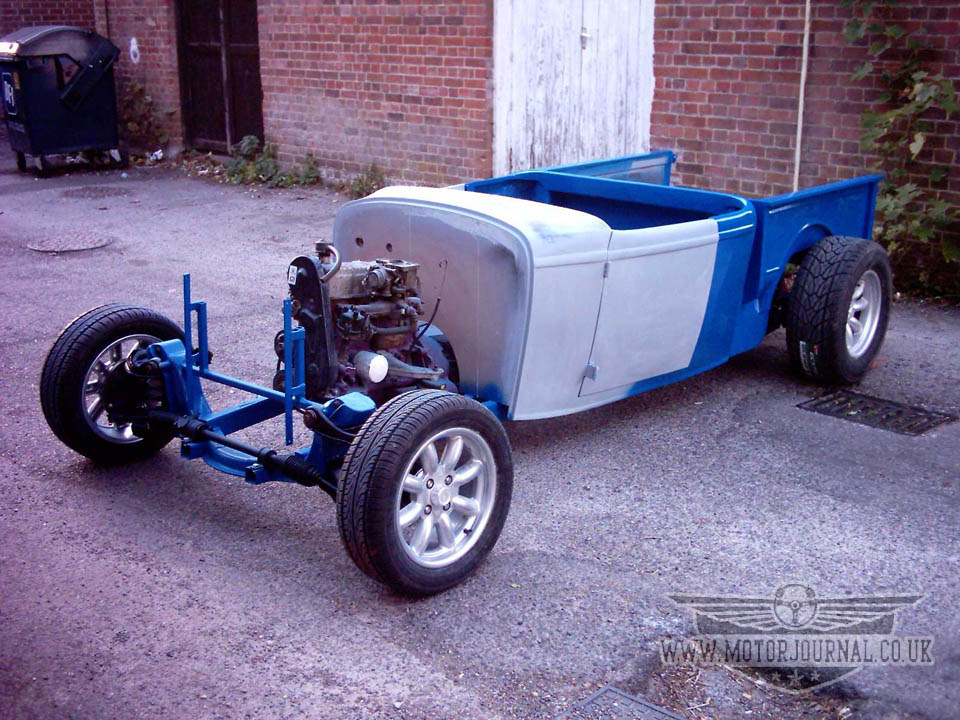 But honestly, as far as I was concerned it looked superb! I told M.R. that I could probably live with it. But of course M.R. couldn't, and several days later I found that he had rubbed the offending areas down, and re-touched them with his touch up gun! I would've almost certainly left them, but M.R. was a professional, and he just couldn't bare to leave it not being as good as it could be! That was just his way, if he was doing it, then it would be done to the best of his ability.

Incase you're wondering about our Policeman friend, he did make several more visits to keep updated with the progress of the Hot Rod during it's build. Some days he would arrive in uniform, and some days just in his normal attire on his day off. I really think that he was more interested in the build of our little Hot Rods, than whether or not we were being a nuisance working late at night, and spraying cars. I wonder if this kind of Policeman still exists in the force today? I'd like to hope so, because I think that him offering advise, and taking an interest in what we were up to rather than running us down to the station every time that we perhaps fractured the occasional law probably did us more good than harm.