June 06, 2019
Thinking that now the cowl was roughed in we would be moving on to another part of the bodywork was a mistake. M.R. was a perfectionist, and although he said that it was good enough for now, it obviously wasn't. That, coupled with the fact that he had liberated some primer from work meant that actually, now we would need to get that dashboard, and cowl ready for primer. 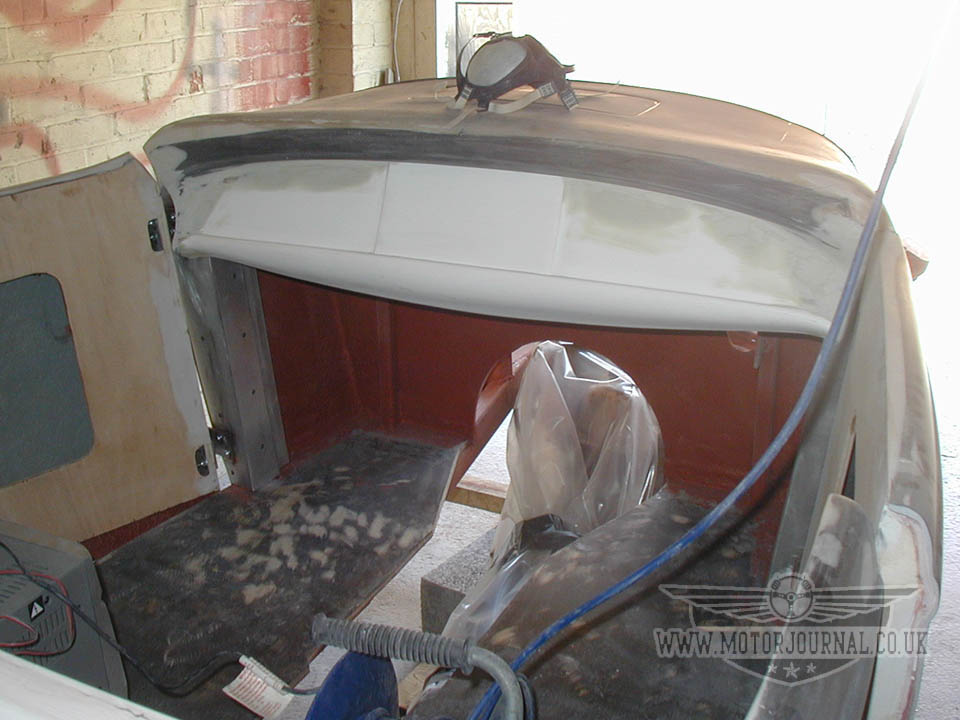 Now that M.R. had decided that we would be priming the front, we thought that it was as good a time as any to fit the bonnet. 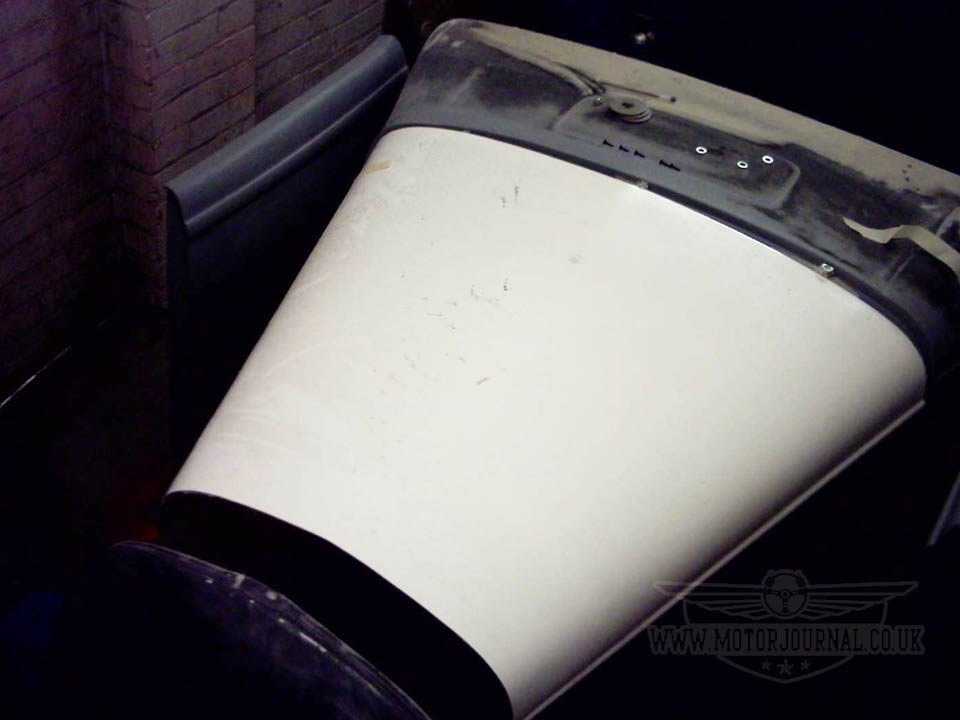 But, like everything else on this build the bonnet wasn't just going to bolt right up, it was four inches too short for a start! I think that this is just one of the problems with taking any old kit car chassis, and trying to fit a body to it that has no right in being there in the first place. But, G.J. had sourced me another bonnet that had got damaged in the molding process, and dropped it off one evening so that we could try and some how lengthen my bonnet to fit. 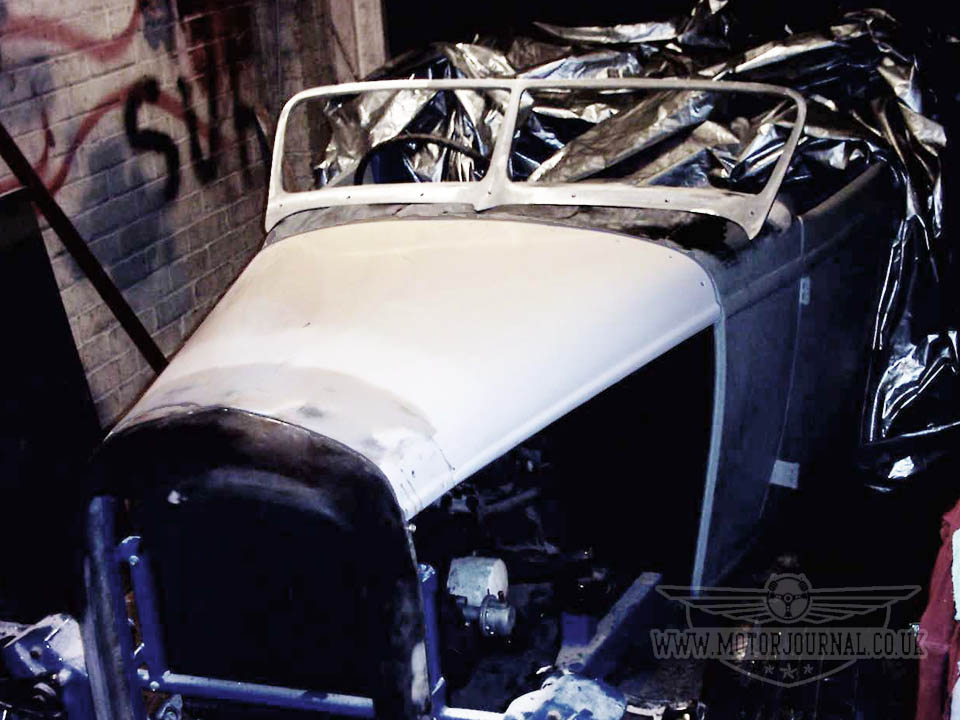 Over the next couple of days, it was sanded, filled, sanded, and filled until it started to look like it was almost meant to be as long as it was.

By the time we thought that we would be putting some primer on the front of my little Hot Rod my DuVall style windscreen had finally turned up. The thing that I found odd about this whole build (That took place long before the luxury of internet shopping!) was that I could never work out why, if I ordered a product from a company based in the UK it would take forever and a day to arrive. But if I phoned a company in the USA, it would arrive much faster, be of a higher quality, and would usually be cheaper. The screen was a good example of this. This screen took about six to eight weeks to arrive... From Essex, just over 100 miles from my folks house where I lived at the time. Not only that, but for the money it cost it was as rough as nuts, and there was no real way to fix it to the bodywork. In the end, the bottom of the aluminium frame was roughed into the shape of the top of the cowl, drilled, and tapped with a 10mm thread. Then threaded bar was used to screw into the windscreen frame. We then drilled holes in the cowl to accept the threaded rod, and underneath the cowl there was some very large steel plates that were bent to the shape of the underside of the cowl. These were put onto the threaded bar, and finally washers and nuts tightened it all down. 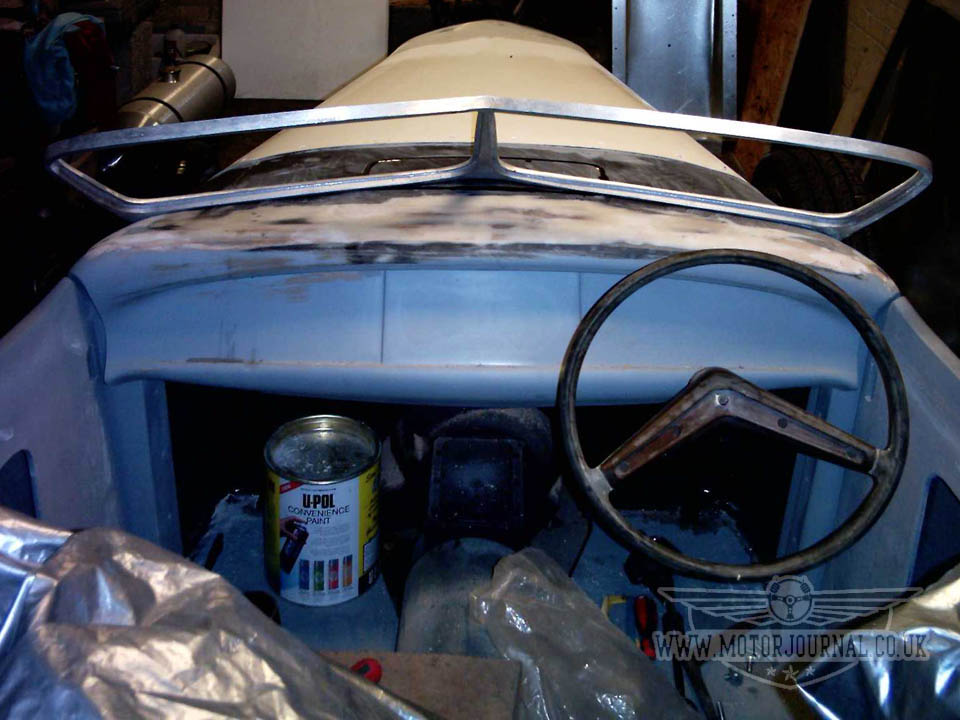 With the bonnet and screen all on, we gave it all a good looking over to make sure nothing else needed filling, or sanding before we squirted the primer on. It all looked good, mind you, it all looked good to me ages ago, but finally it was looking good to M.R. as well. We were ready for primer! 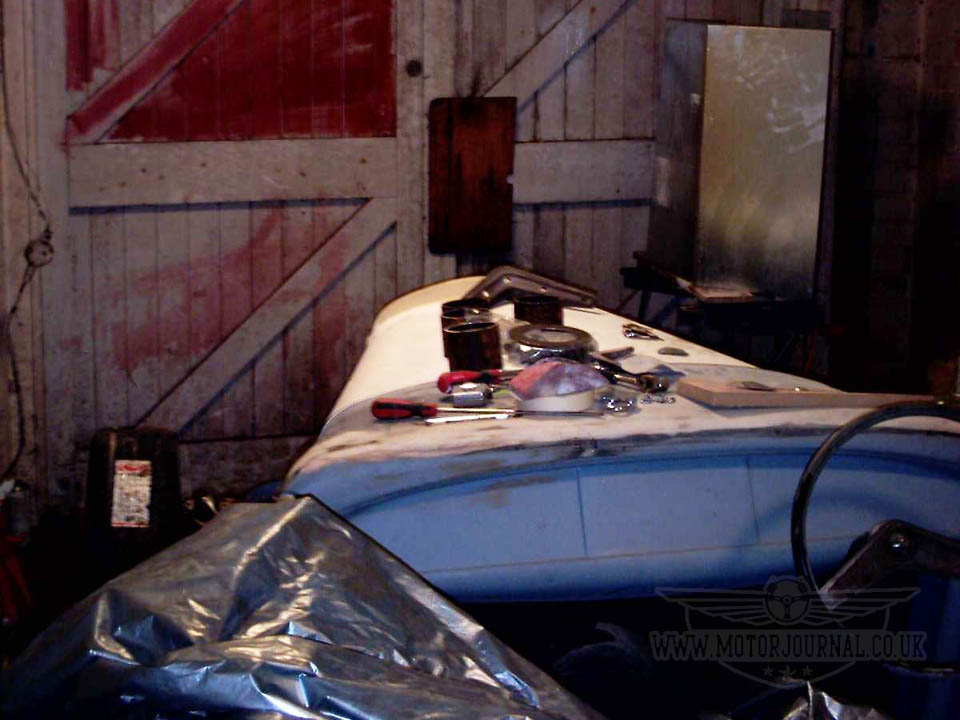 Once again, everything was removed, and we gave the whole front of the cab a good rub down with some wet 'n' dry, followed by a good wipe over with alcohol. We were ready for primer. As ever, it was going to be a late one, and just after midnight, out came the spray gun! We had the doors shut because it was quite a windy night that night, and so with me stood outside in the alley keeping guard, M.R. applied the primer. After an hour or so he emerged, we closed the door and snapped the padlock on it and headed for home.

The following day the cowl was looking pretty good... 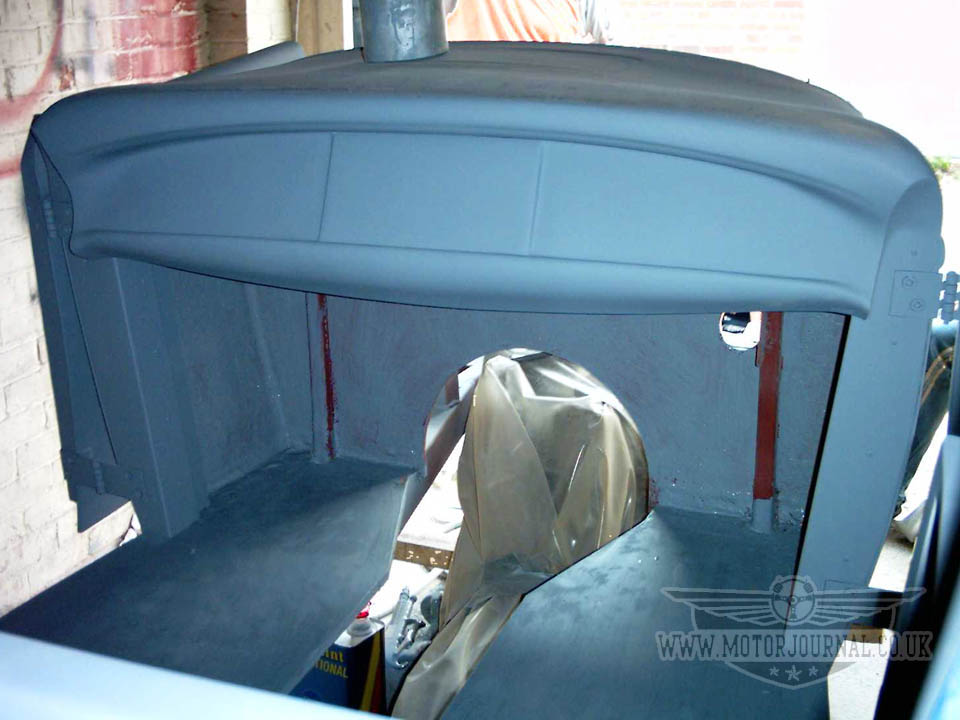 I must admit that just seeing it one colour instead of fifty shades of grey, boosted my moral a bit. But I still left it for a couple of days before tackling anything else on my Hot Rod. I think I was just a bit burned out from working on a small area of the thing for so long. We decided that, as I now had all my suspension and brake parts back from the powder coaters it might be nice to bolt that all together for a while, take a break from working on the bodywork, and get the Hot Rod mobile again. But by this point it was probably the first time I felt like taking a break from the whole damn thing! It was cold, damp, and when M.R. wasn't about, quite lonely in the garage, I genuinely felt like I was in solitary confinement most of the time, and I was sick of it. But I guess I was kinda lucky, for one thing, M.R. had the garage next door, but the other thing was that we were not alone in that alley, some bikers had also taken up residence and were building bikes in the alley too. But even so, when nobody was about it was pretty lonely.

Some twenty odd miles away M.C. was feeling the tranquility of solitude a little too much too. He was well and truely on his own, his garage was on the side of his house, which was good because it meant he had access to power, toilets, snacks et cetera. But he didn't see anyone at all while he was working on his Hot Rod, and had nobody to talk to, or to help him when he needed it. There were days, when much like me he was really struggling!

Looking back on it now, we should've helped him out a lot more, but the problem was that we were all so focused on our own projects, and so blinkered to the plight of each other that we all soldiered on regardless. What we should've done was helped each other out, and no doubt if M.C. had his garage in the same alley as myself and M.R. we would've. The other thing we should've done was to take breaks from it all every once in a while. We were all so engrossed, and so focused that even when it was a real slog, which it was quite a lot of the time, we soldiered on regardless, and from time to time this made it quite a gruelling process. But I guess you live and learn.