April 24, 2019
The day of the move came, or should that be, the night of the move came. M.R. had come up with a device to tow the Hot Rod across the town to it's new place of construction. 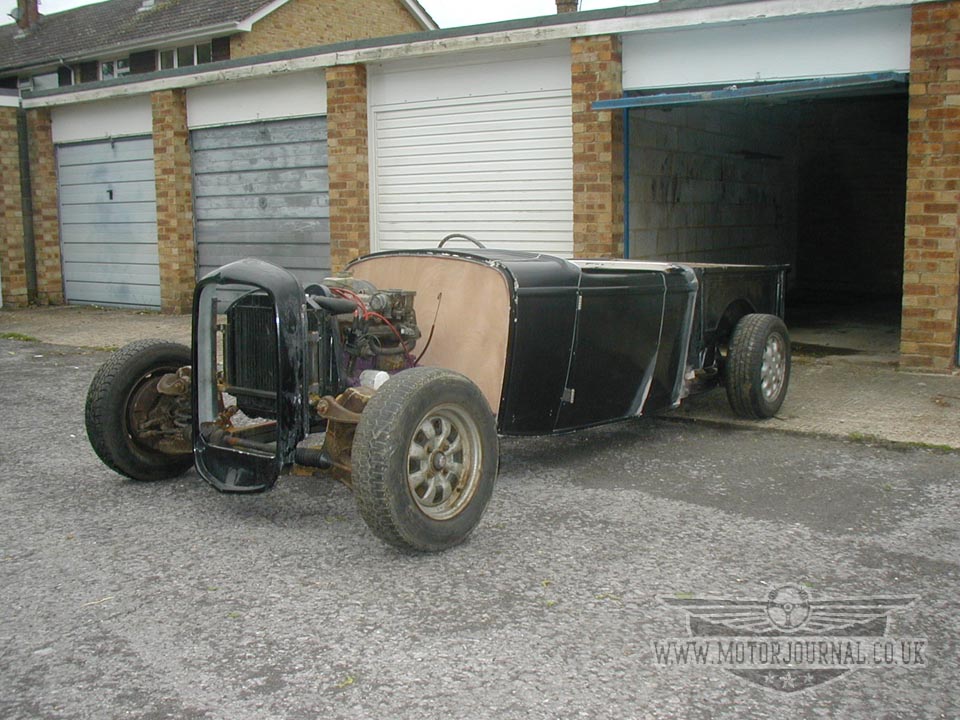 Basically what this was was a six foot long piece of 1" square tubing with a large shackle welded on one end, and a piece of chain and a loop welded on the other end. The idea was that we fasten the bar to the back of his car with the shackle end around the towing loop. Then the other end we wrapped the chain around the lower wishbone, and fastened it to the loop with another shackle making the chain as short as possible. We gave it a dry run in the garage block towing it up and town the 100 foot block. It was a bit jerky as the chain could never get tight enough, but basically it worked. M.R. looked at me and said, "See, it works! Tonight should be a piece of cake!" I'll admit that it certainly did work in the garage block where we were just towing it straight up and down. But what about out on the road, what about corners, what about bumps, what about the police? M.R. said not to worry, as we'd be doing it so late that they'd all be home in bed by then!!

02:00hrs... Ish! We were hooking up the Hot Rod to the back of M.R.s Cortina, we were ready to go. "I can't see how this can go wrong." M.R. said, "But if it comes undone, just yell!" OK I replied, but I'll be honest, I really didn't have a lot of confidence in towing the Hot Rod through town, even though it was the middle of the night, and in theory there'd be nobody about. Off we went. I gripped the wheel, and had my foot on the brake pedal which was connected to nothing, so in reality, other than steering I had no real control over my destiny! Even though it was really early in the morning there was still a few people about, including, you guessed it, a Policeman. Hearing M.R.s Cortinas rather loud exhaust echoing off the buildings either side of the road, he turned to face us. He stepped to the side of the pavement nearest the road, and held up his hand! Crap I thought, I knew this was going to happen, we're right in the poo now! M.R. tooted his horn joyfully and waved back as we drove by. I figured that I might as well wave too, so I did, looking back he really didn't look to impressed, and no doubt was on his radio to the station. We were about half way beetween the two garages, and the traffic lights ahead of us were red. M.R. stopped, had a brief look then off we went, straight through the red light! Another five minutes or so, and we were at the new garage unhooking the Hot Rod! 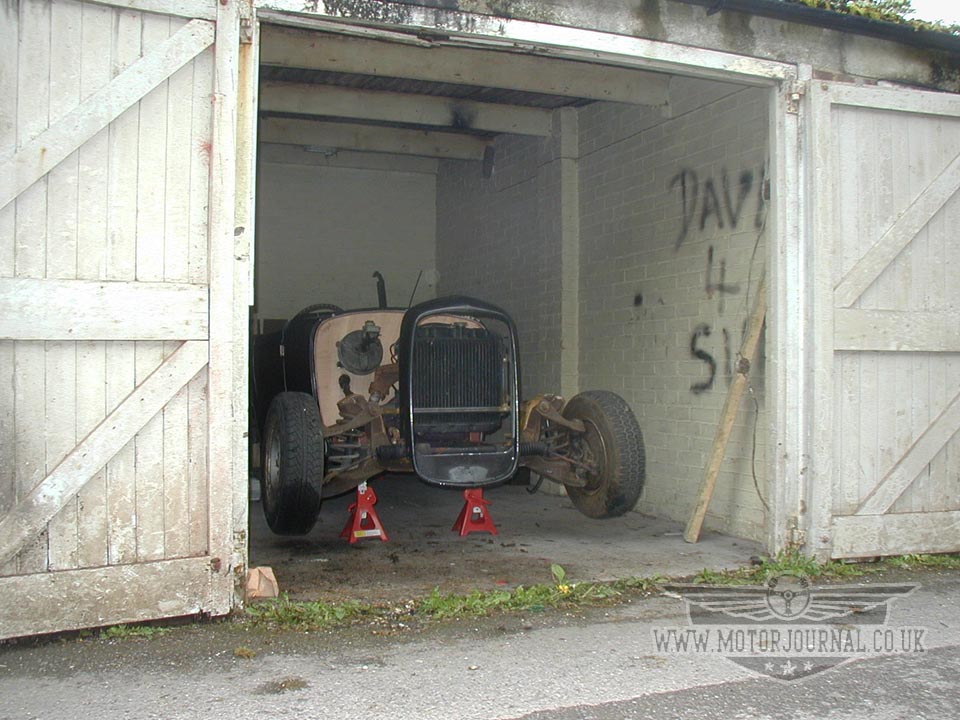 "See?" M.R. said, "It was a piece of cake!" "Oh Yeah." I said, "What about that copper?" "What the friendly one that was waving to us?" M.R. replied, "I think he was just wanting to look at some cool cars! Besides, it's too late now, we're here, what can he do?" I thought about that for a minute, what could he do? M.R. doesn't have a front plate on his Cortina, and his back plate was probably obstructed by the Hot Rod, and that didn't have any plates on it! We pushed it into the garage and called it a night.

The following day upon hearing news of it's arrival at the garage, M.C. came to look at my Hot Rod. As suspected he wasn't happy, he felt that mine looked more complete than his, and mine was ordered ages after his was. I had to agree with him, but I reminded him that I was down in Bournemouth every other week badgering G.J. to get it done. Even so M.C. wasn't happy, although he had got his just before mine, and he'd spent a month working on it already, it was still nowhere near where near as far along as mine was, but atleast he had made a start on his, and after all three of us gave mine a good looking over, we all agreed that it was about time that the build started. We decided that although G.J. and his merry men had done a fairly good job cleaning up the rust from the chassis, there were areas that still could be better, mainly the front suspension. Besides which I figured that as it was in bits then now would be as good a time as any to refresh the suspension with new bushes, ball joints et cetera. 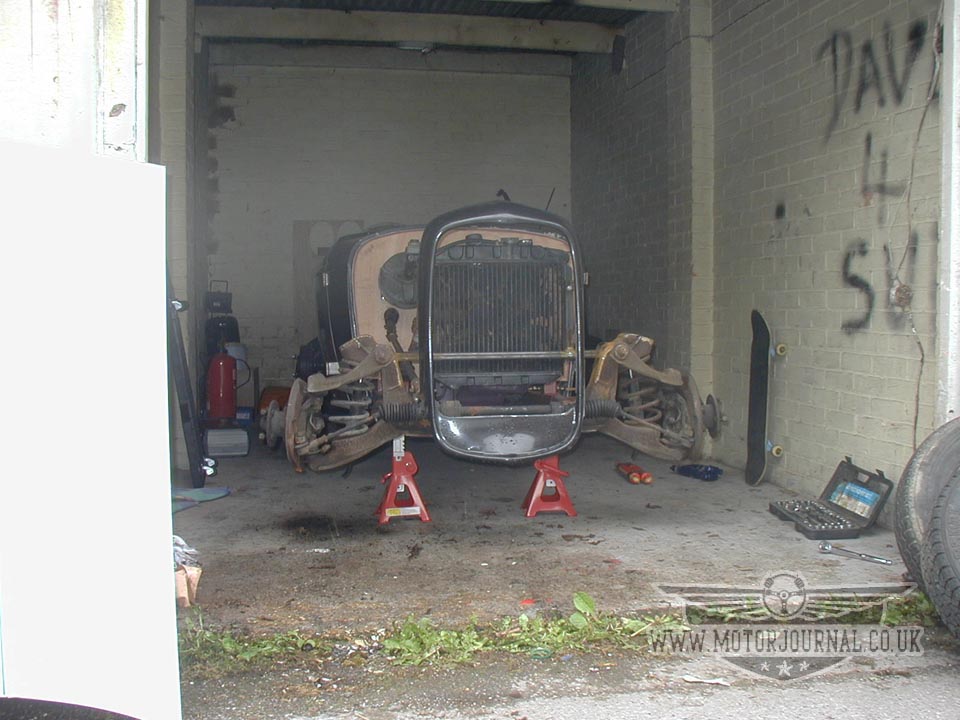 The teardown began. M.R. had access to a shot blasting cabinet, and powder coating where he worked, and much like he'd done on his own build he was going to make use of those things on mine too. Before long all the bits of the front suspension that were going to come off, were off, and getting ready to be shot blasted, and powder coated. While M.R. was doing this, I busied myself with various wire wheels and wire brushes. 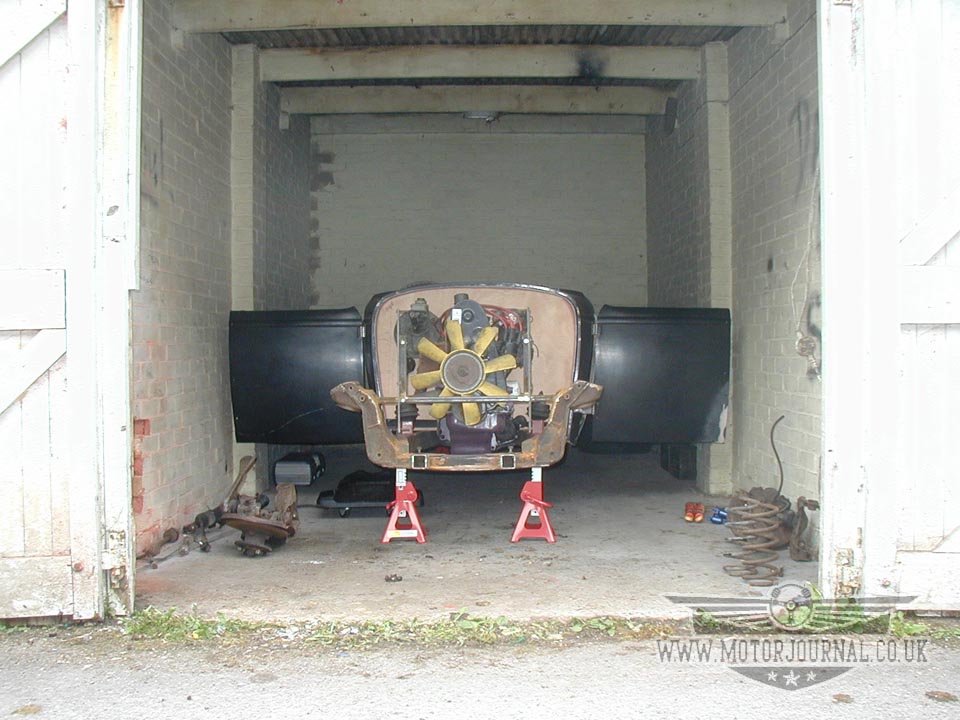 I'm not really sure how it does it, but the dust from cleaning iron oxide off your metalwork gets everywhere. But worse than that, the bits of wire from the wire wheels seemed to constantly be embedding themselves into my body. Over the next three or four evenings I continued to try to ward off Anaemia by both absorbing tiny particles of airbourne rust dust, and by inplanting tiny shards of steel into by skin! I'm not sure how much good this did me, but I figured that it might just be an added bonus to getting my suspension cleaned up!