January 10, 2019
There comes a point in time when you can only go to so many cars shows, read so many magazines, and look at so many photos before this reaches a point where you've learned all you can. The next step was to find someone who builds Hot Rods for real, go and see them, chat to them, and hopefully see their product. My friends and I were at that point, but better yet, one of my friends (M.R.) had found a guy (Who from here on in will be referred to simply as G.J.) who was trying to start a little company to produce budget Hot Rods, better yet, it the guy was only forty miles away or so from us, and so through a chance meeting up on Portsdown Hill over a cup of tea, we arranged to come down to Bournemouth, and see what he was producing. The following weekend the three of us drove the forty odd miles for our first viewing of a possible budget Hot Rod for each of us. 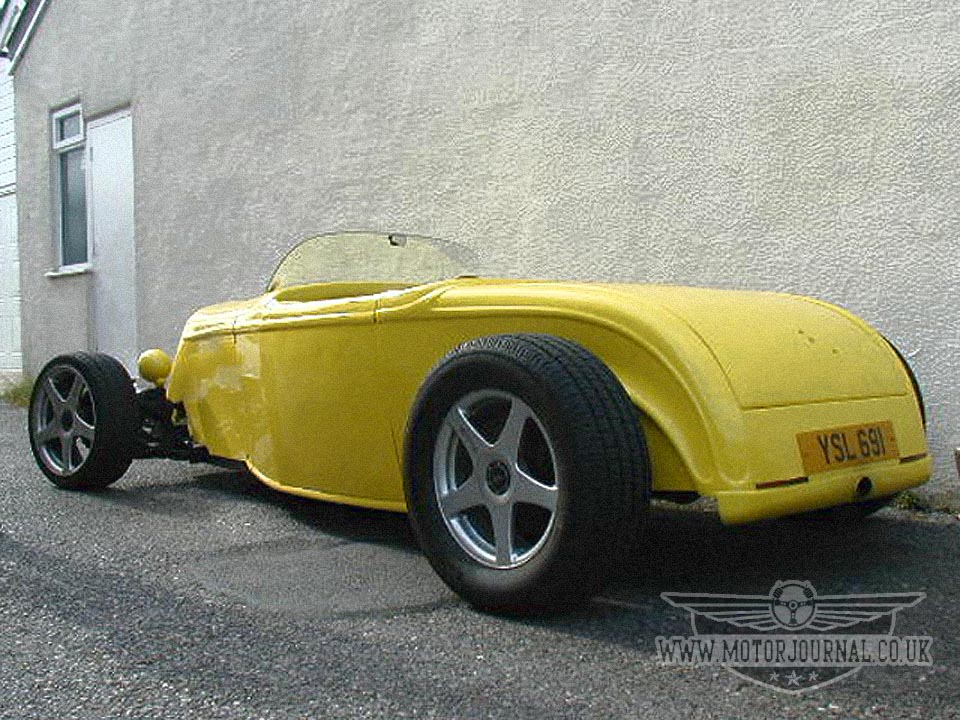 When we arrived at G.J's. house this was the sight that greeted us! I must admit I wasn't exactly blown away by what I was looking at. But the three of us stood there in the cold early Spring morning air it soon became apparent that we all sort of felt the same way. Although I quite liked the shape of most of the body, I didn't like how low it was, to my eyes that just didn't look right at all. 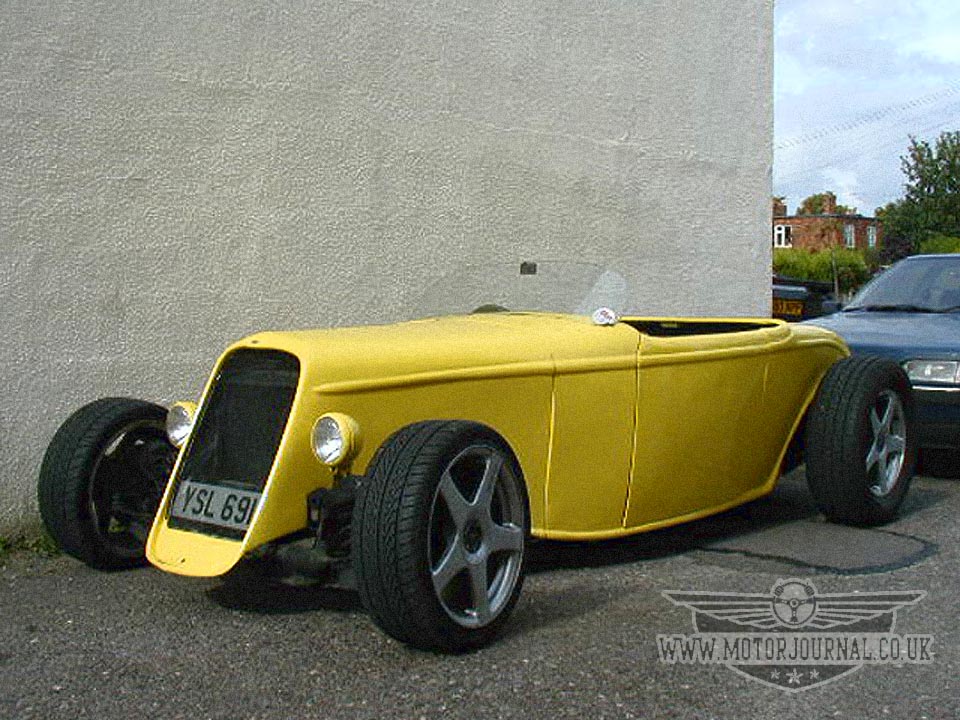 But apart from the height issue, for me it was the front that really didn't work, the Model 'B'esque grille, laid back like that, and the Mini windscreen which was glued into a slot roughly cut into the top of the dashboard didn't look right to me. I asked my friends what they thought. They both felt that it wasn't what they were looking for, but one of them, (M.R.) thought it was a pretty good jumping off point that could form the basis of a car that could be vastly improved upon. We chatted amoungst ourselves for a good half an hour or so before the owner, who we had arranged to meet finally materialised.  By the time the owner came outside to chat with us M.R. had convinced M.C. that it probably would be possible to turn this sows ear into a silk purse, and now the pair of them were trying to convince me too. I still wasn't too sure, I guess that the biggest stumbling block was my own ability, I could just see their two Hot Rods looking superb, and mine looking rubbish. I voiced my concerns and they tried to reassure me that between the three of us, we could build three cool little Hot Rods... Cooler than this yellow one! 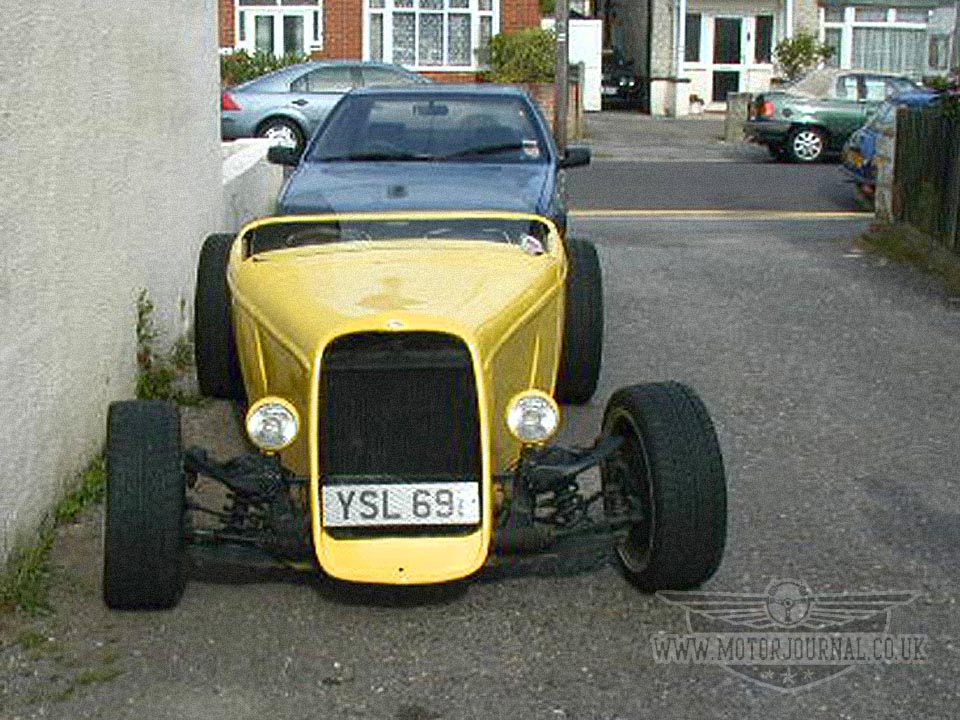 G.J. had built this little yellow beauty as a sort of experiment, a prototype, and indeed a kind of business card to show people what he was capable of doing, I told him that I wasn't too impressed with things like the doors not being able to open, but he reassured me that they didn't need to open as it was so low that you could just step over the sides. I told him that I wasn't impressed with that either. To which he responded that it could be built practically any height, and the doors could be made functional too. He went on to say that the possibilities for the build of it were practically limitless, it could be as rough, or as nice as the builders talents or wallet allowed. We asked him about the chassis, and where we would get one, and G.J. said that pretty much any chassis could be used. He went on to say that he had sold just the bodies to fellas who draped them over old Kit Car chassis, Scimitar chassis, and even original old Ford chassis. As long as the wheelbase was near enough, the sky was the limit. I must've come across as a right old kill joy as I had loads of questions, and most of them were aimed at almost talking me out of doing it. I think I sort of started to get on board when I told G.J. that I didn't care for the sloped back grille, and that it looked odd to me. G.J. told me that was an experimental nose, and that should I want to build something a little more traditional, I could have a more stock looking model 'B' grille and bonnet. I must admit that I liked that idea a little bit more. G.J. then went on to say that he could get us practically any Hot Rod bodystyle, not just a model 'B', but a model 'A'  in either a roadster, a coupé, or even a pick up, a model 'B' in a roadster, coupé in either model 18, or 40 guise. He also offered a model 'T' as a roadster, should we want to go along the T-bucket route. After a long chat we told G.J. that we would think about it, but M.R. said that he was pretty sure he'd be coming back to place an order. Before we left G.J. house he told us where we might see a couple of other Hot Rod bodies that he had sold to folk who lived nearby, and said that they would be parked near the side of the road if we wanted to see what other people had built with his bodies. So off we went in search of them. the first one we found was this pick up... 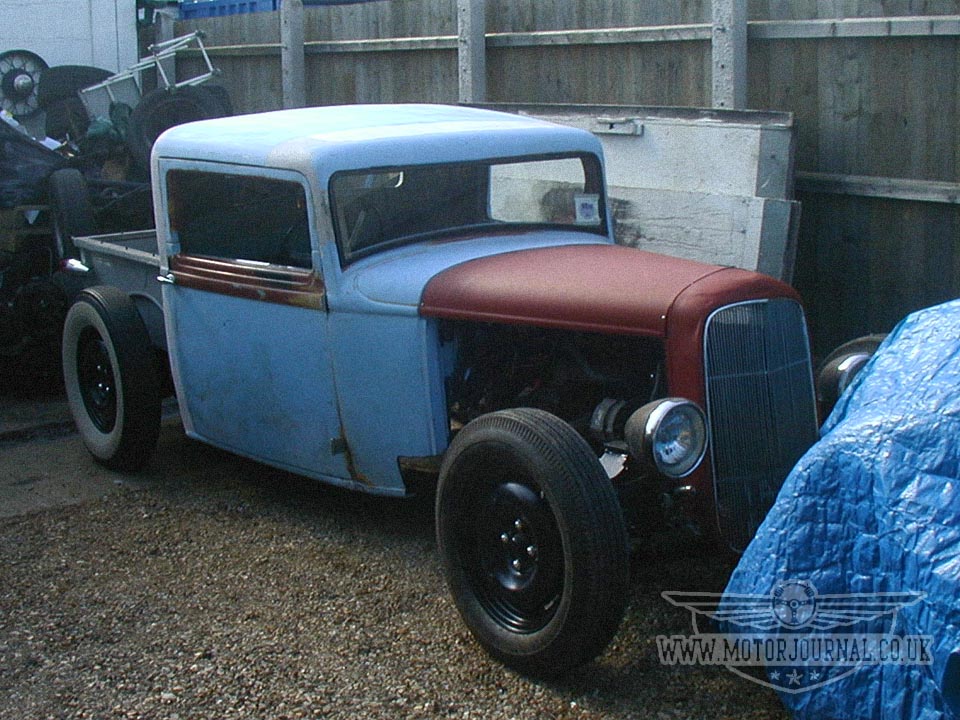 Clearly a work in progress, and it was parked a fair way from the road, and so it felt a bit rude to wander up their drive, I took a snap from the roadside, and we headed off to find some of the others. It would appear that G.J. had supplied various Hot Rod bodies to about half a dozen people within a five mile radius of his house. However we had a good look around and couldn't find the others with the exception of this little beauty of a track nosed model 'A'. 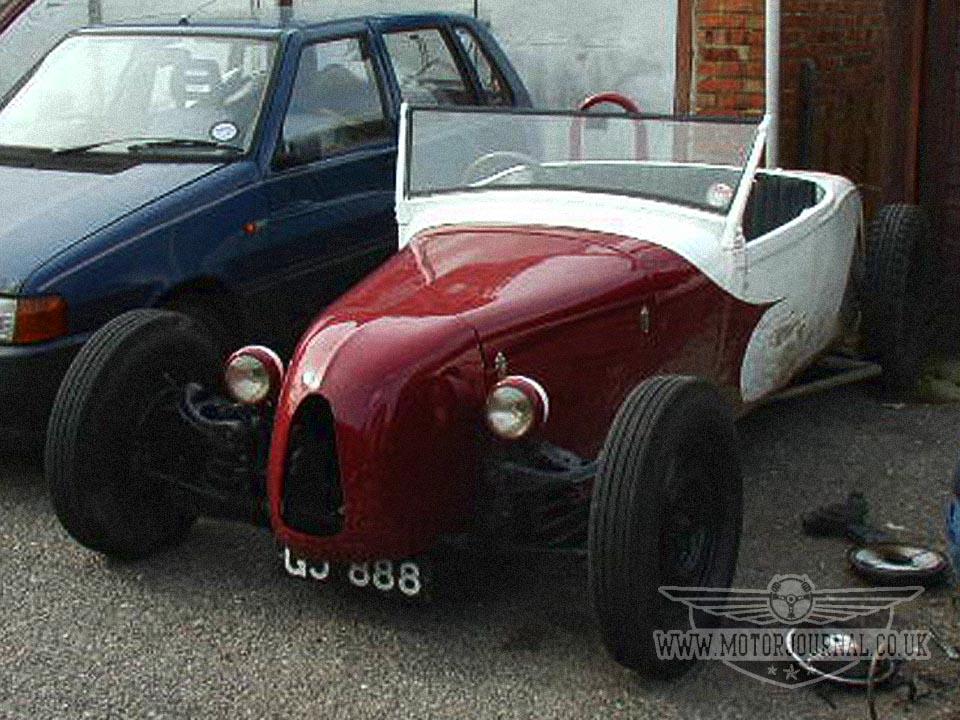 Better yet the owner was working on it, and it had functioning door, yep thats right, just the one! We chatted with the owner who told us that he had draped his model 'A' body over a Dutton kit car chassis as somebody had crashed into his Dutton, damaging it's fibre-glass body, and so, rather than just throw it away he decided that the way forward was simply to drape another body over it. We asked him what it was like to drive and he told us that it was only an 1100 cc mk1 Escort engine, but it was quite peppy, and as it was so light it whipped along nicely.

The one thing that we all noticed about this little 'A' over G.J's. 'B' was just how nice the body looked on it, so we asked him if he had to do much to the body to get it looking this good. He said, "Yeah, loads, he'd got six or seven months on the bodywork alone just trying to get it looking right before he painted it!" M.R. looked at M.C. and I and just said "See, it can be made into something good!" M.C. agreed, and I must admit I was getting more into the idea. The forty odd mile drive home was filled with conversation about building our own Hot Rods, M.R. said that he was definitely going to build one. M.C. said he was probably going to build one, and I had decided that if either one went back to see G.J. and order a body, then I would go with them and probably continue to procrastinate about building one!