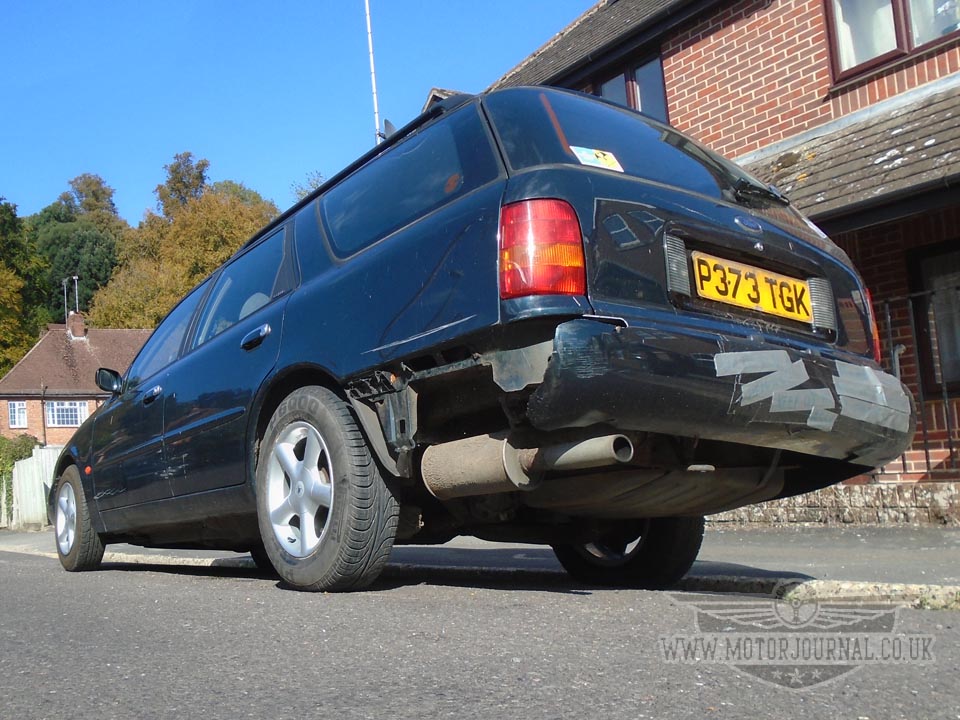 I had no idea that finding a replacement bumper for a 1996 Ford Scorpio estate would prove so difficult! The problem, it would appear would be that Ford thought a suitable material to make bumpers for the Scorpio should have all the properties of glass, but not be transparent! Therefore twenty years after the last one rolled off the production line in Cologne the supply has pretty much dried up. I have even wondered about having one made from fibreglass, the problem with this though is that I need a good one to start with to make a mold from, and if I could find one of those, then I wouldn't need to have one made from fibreglass!

For the last five months I have pretty much left the rear bumper as it was in the hope that one would show up. However the problem with this is that it rattles all the time, and at speed on the motorway it really makes a racket as it vibrates. Added to this in the last couple of weeks I have had two chats with the boys in blue. The first one was because the officer wasn't happy with the jagged edges of the bumper. I told him that I wasn't too happy with them either, and if I was honest I preferred it when the bumper was smooth and wrapped around the body like it did before it got driven into. Anyway, I figured that I would kill two birds with one stone, and if I removed the bumper completely there would be no jagged edges, and no racket as I drive along. So thats what I did. 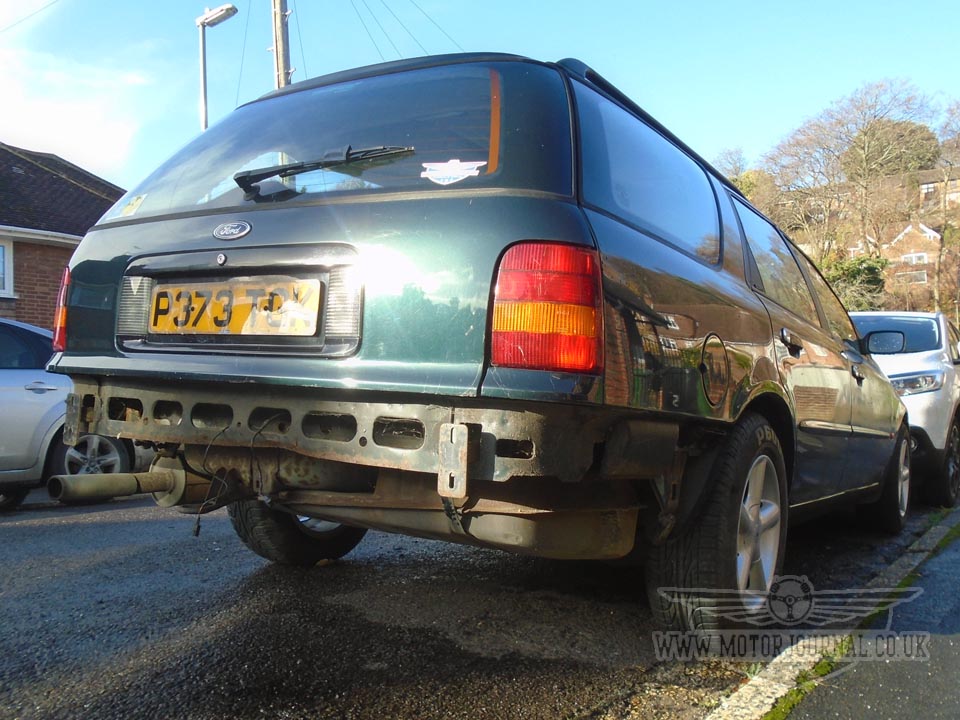 I'll admit, its not as nice as it was with a complete bumper, but I do think that it looks better than it did with a broken bumper. Also, the other day as I drove along the motorway I did start to feel quite concerned that it was about to break off completely and land on the motorway. This would be bad, however on impact with the motorway it would probably disintegrate into a million pieces so at least it wouldn't cause a huge obstruction in the road. Of course everyone behind me would probably get punctures from the razor sharp fragments that it left on the road, and so with this thought in mind I removed it when I pulled off the motorway and into the services. It really didn't take a lot of effort, but in breaking it all off by hand in the motorway services I did manage to cut myself. Anyway, the parts were put into the bin in the car park, and I continued my journey. My feeling was that at the very least I wouldn't now attract the attention of the police as I no longer had sharp or jagged edges on the rear of my car... Wrong!! Last night I think they were out and about looking for people who had been indulging in a little bit of alcohol, and, as I was on my way through town I got the pull. The problem this time? No rear number plate lights! I explained the situation, and they seemed to understand, but suggested that I find a way to mount the rear number plate lights. After leaving them, and on the way home I passed a skip, and I had a vision! 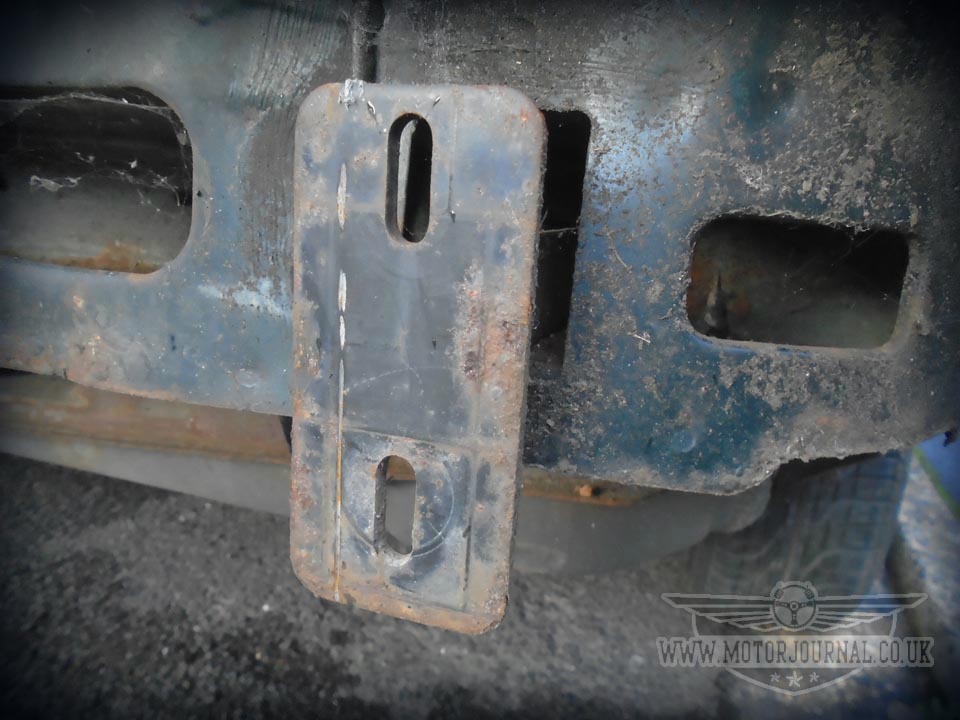 Now, before I go on it would be fair to warn you that I am no carpenter. I can do the simple stuff like studwork walls, and things that get hidden away, but as a rule my carpentry work is crude at the very best! Anyway, poking out from the skip was various bits of wood, and so, as I was in my estate car I stopped and collected a small selection of different sized pieces that I thought might come in handy. Actually I liberated a fair bit as I figured what I didn't use, would be fuel for my log burner!

My initial plan was to just bolt a straight plank of wood to the bumper brackets, then fix the numberplate lights to that and everyone would be happy. The problem with this though was that none of the planks of wood were wide enough to go from the top of the bracket to the bottom. 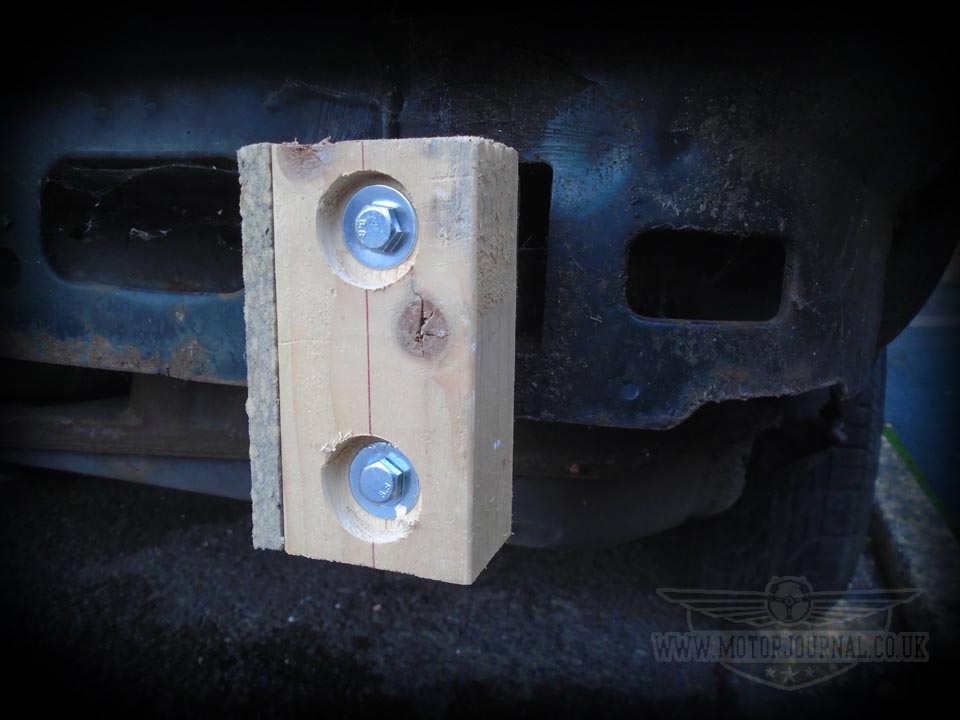 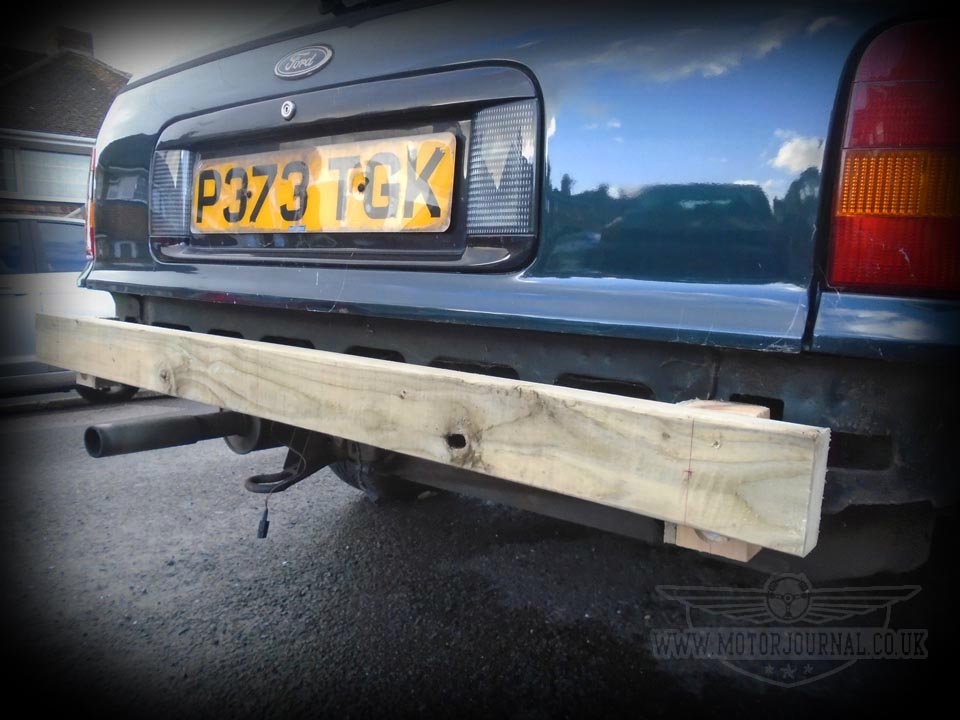 Screwed a short plank to that. I think it might have looked marginally better if it was a bit taller as it would've completely covered the blocks, but then if it had have been taller I wouldn't have needed the blocks anyway! Anyway I thought this looked ok in a crude sort of way. I thought it looked a bit like a push bar on the back on a Bonneville salt flat racer or something... I really need to seek help for my delusions, they're getting out of hand now! But happily I now had both a bumper of some description that wasn't sharp, and a place to mount numberplate lights! 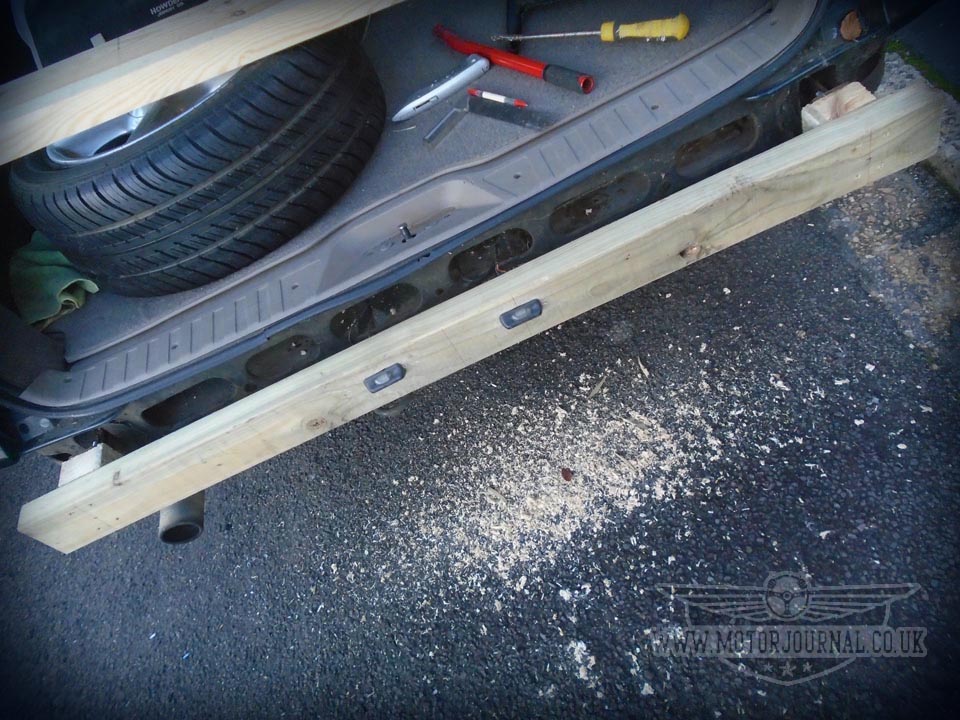 I drilled a series of three holes for each light into the plank with my cheap spade bits, then chiselled out the wood between the holes with my sharpest... Erm... Screwdriver! Like I said, I'm no carpenter! With this done I stood back and admired my handiwork! Hmm... It wasn't good! I figured that I had covered all the bases to keep the boys in blue happy, but the more I looked at it, the more I thought that those numberplate lights are a little bit vulnerable. Especially as we have more than one resident on our street that parks by touch! I could just see me coming out to the Scorpio one morning to find that the bumper was fine, but the numberplate lights had been crushed to oblivion! Right, back to the woodpile! 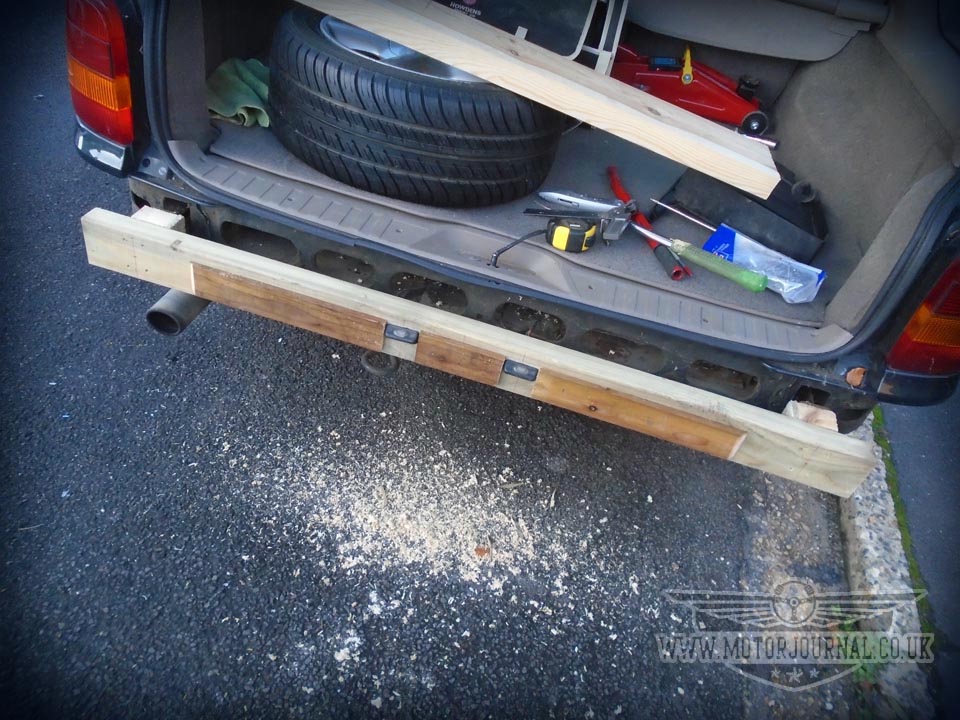 I dragged out a couple of half inch thick bits that I originally thought would be good for kindling. I would think that at some point in time they would've formed part of somebodies bed, but no matter, it was now going to be part of the Scorpio. I cut the first length into three pieces, and put one piece in the middle, and the two longer pieces either side of the numberplate lights. I was feeling a little bit confident, and so I even cut the ends at a 45° angle to add a little contouring to the bumper! 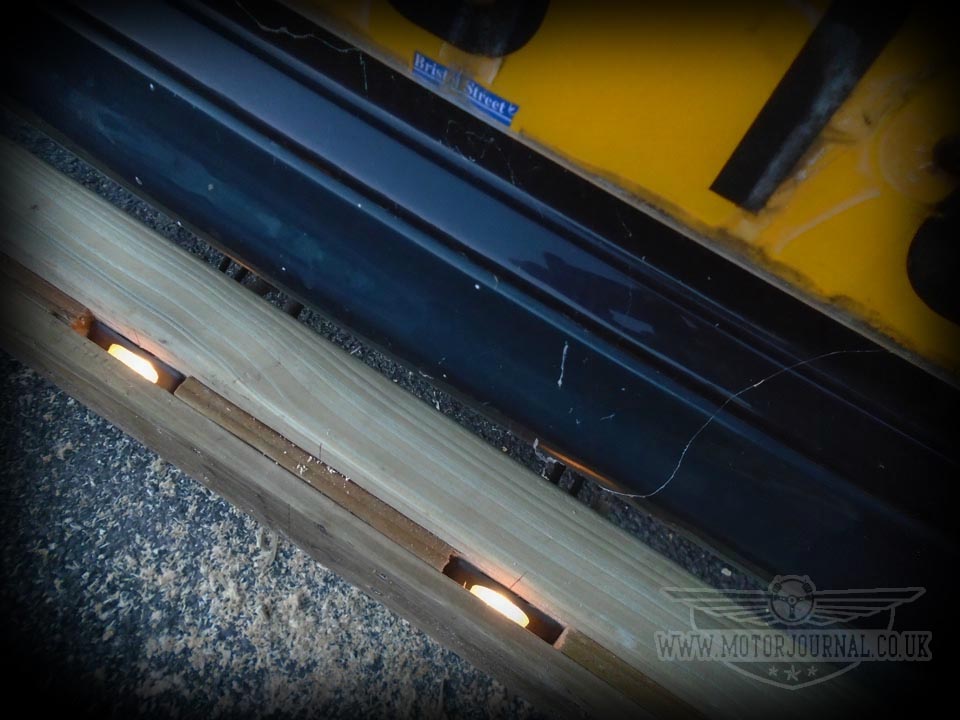 I also cut the ends of the second piece at a 45° angle in order to continue to add a little contouring to the bumper. I then screwed this piece onto the first piece which then meant that the numberplate lights were covered, and hopefully protected a little! 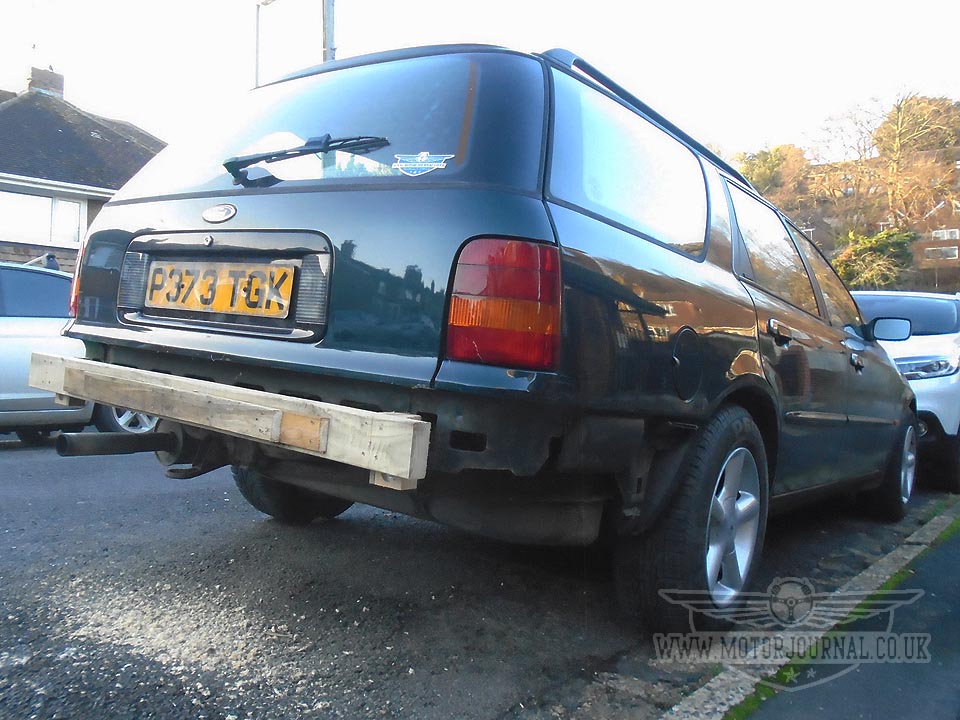 The completed project looks like this! Yes I know, it's not good is it. But hopefully it will stop me having to spend time talking to strange men by the side of the road. Plus, this has the added benefit of hopefully keeping the rear end of the Scorpio straight the next time some moron thinks it will be ok to just run into my car and drive away. The silly thing is that one of my main concerns is that the Scorpio doesn't end up on the banger circuit, but it seems that despite my best efforts it's getting the looks of a banger racer without being in the race! Hopefully before too long I will locate a bumper for it, although I'm not going to hold my breath! But should you have a rear bumper for a 1996 Ford Scorpio sitting in your garage doing nothing, please do let me know!