August 19, 2018
The Celeste has had quite a lot of use just lately. It's gone from off the road for a decade to daily driver, and to be honest it's been pretty good. The other day however it had developed a bit of a squeek, that turned rather quickly into a nasty, and very annoying screech. 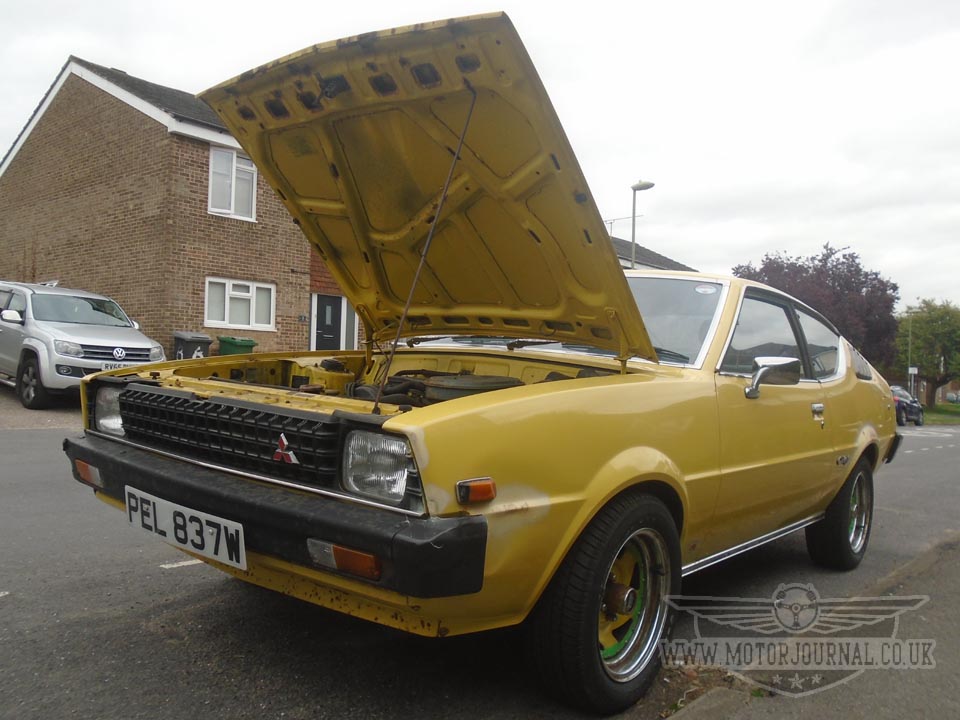 I knew what the problem was, my brand new (fitted back in 2007) Halfords fanbelt was loose. I figured that over time it may have become a bit saggy, but I thought that it wouldn't cause too much drama, and even the most lack-lustre mechanic (like myself) could have it fixed in about half an hour or so. 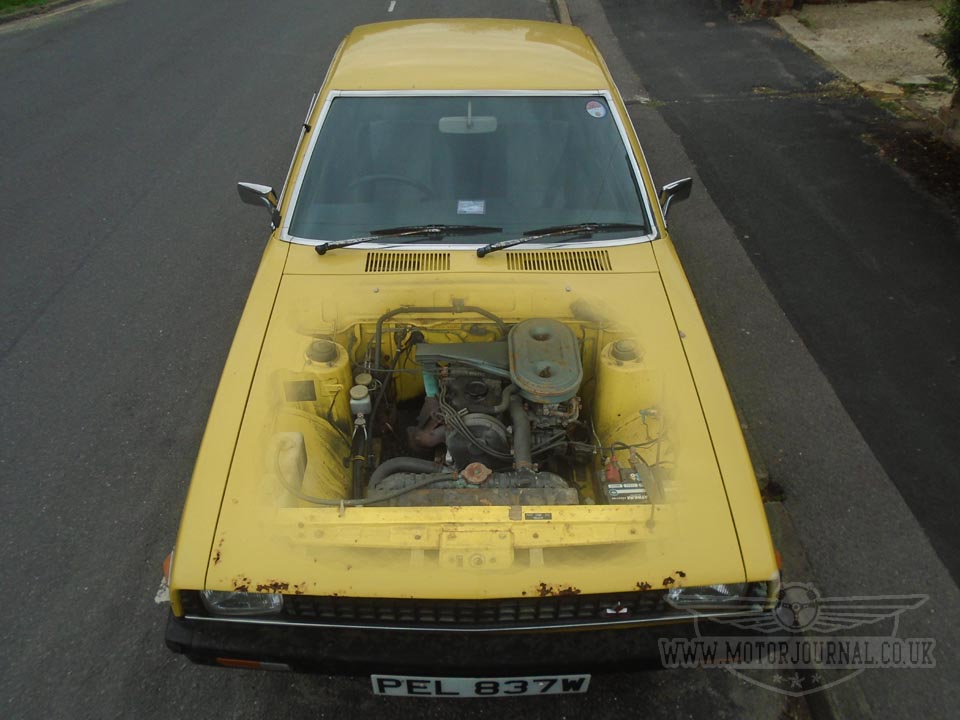 Under the bonnet of the Celeste its a pretty big space, and therefore everything in there is easy to get to, and being a car from the seventies, it's pretty uncomplicated, and easy to work on. Or so I thought! I headed out in theDaewoo to round up some tools from my garage, then headed back to BelongaClint to rectify the problem. As I went inside to grab the keys to the Celeste I flicked the kettle on cheerfully with the thought that I'd be soon back in the kitchen enjoying a nice cup of tea and a few digestives. Back outside and after opening the bonnet I was greeted by my fan belt looking a little bit worse for wear! Not only was it a bit saggy, but it was looking kinda thin too! I'm guessing that the rust on the pulley wheels had just eaten away at the fan belt as it rotated. Plus, no doubt a ten year old fan belt has probably deteriorated over time even without use. BUM!! Oh well, that cup of tea's gonna have to wait. I headed off to my local motorfactors to see if they would have one. I thought that they're bound to have a fan belt for a 1981 Mitsubishi on the shelf! 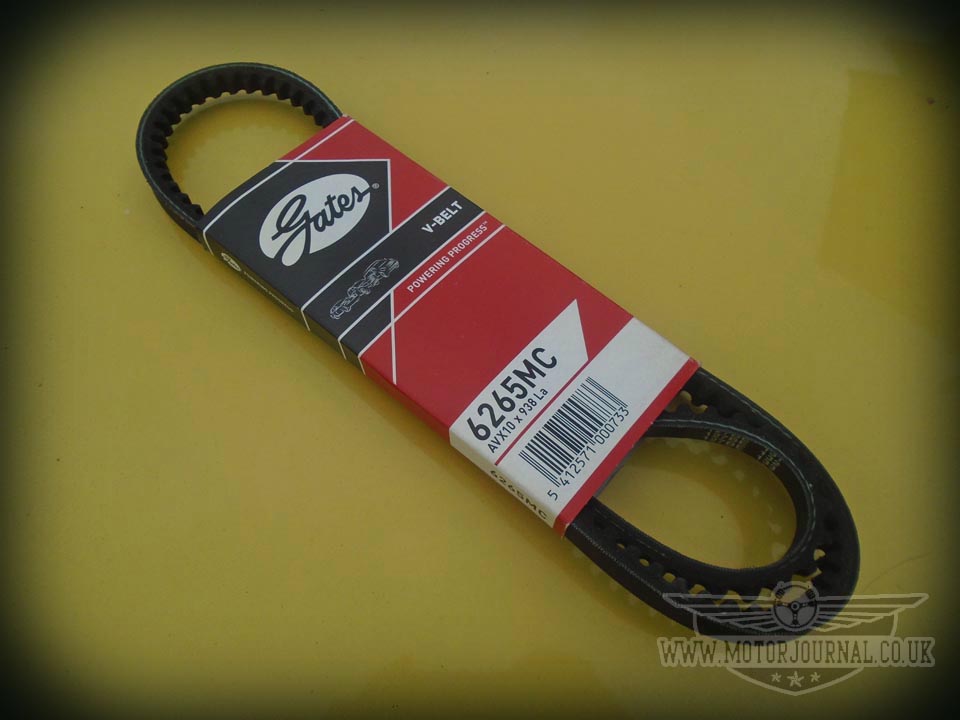 To my amazement they did! £7.99 removed from my piggy bank, and I was heading back to BelongaClint to fit my new fan belt. Before starting I went inside and flicked the kettle on cheerfully with the thought that I'd be soon back in the kitchen enjoying a nice cup of tea and a few digestives. Back outside and I thought that as the old fan belt was so saggy I thought I'd see if it would just come off. It did, and so I measured the difference between the old one, and the new one for comparisons sake. 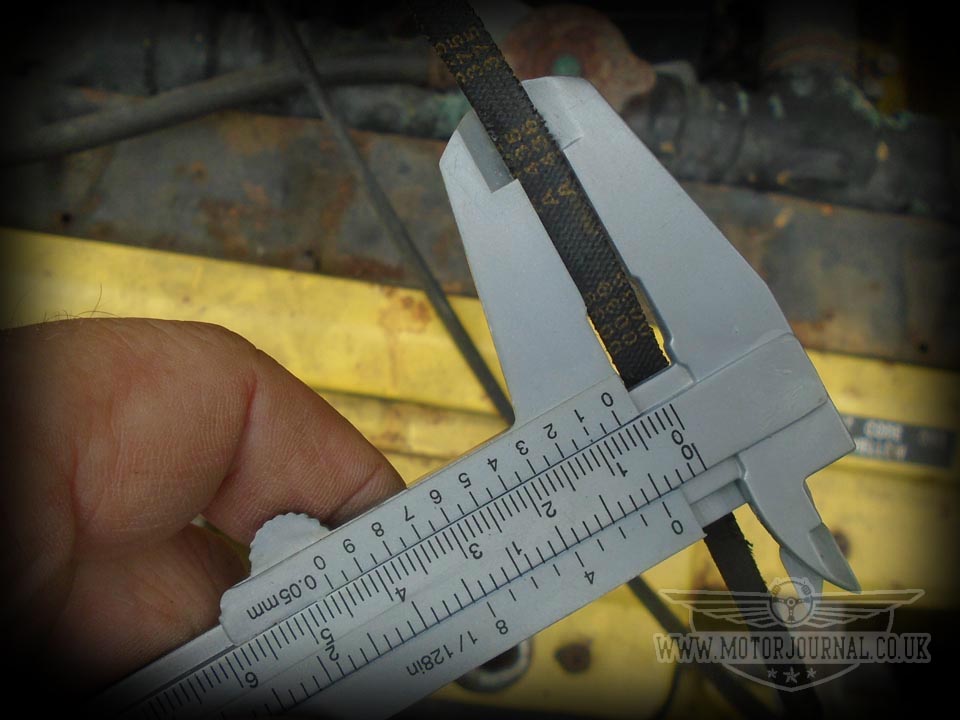 The old one is now worn down to being just over 6mm wide, and like a redneck hillbilly, has no teeth! 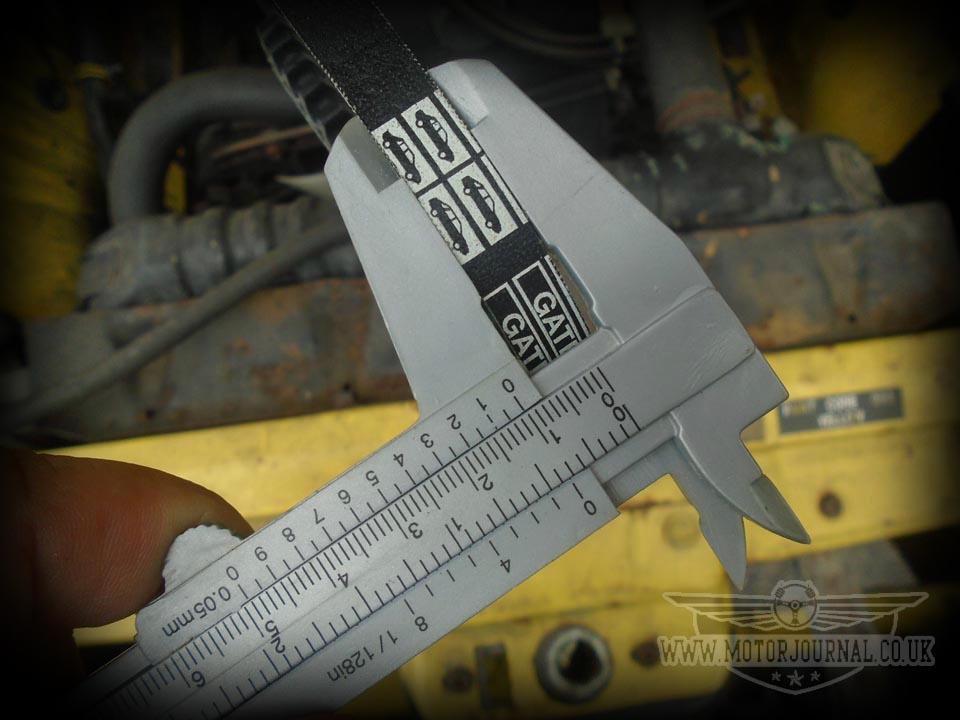 The new one is about 10mm wide, and has more teeth than Jaws! Although, probably not as sharp! I wondered if I could stretch it over the pulley wheels, I had a quick go, but it was a no go. Besides, I'd pretty quickly decided that it was probably a bad idea to just stretch it over, as I'd probably wind up damaging the new belt too! Nevermind, one bolt, maybe two at the most and the alternator would be lose, and I could just slip the new fan belt on, tighten it all back up, and be inside with my cup of tea. I thought that as the kettle must've boiled by now I might as well get the tea brewing. I like it a bit strong, and with the five minutes or so that I had allowed myself to loosen one bolt, slip the fan belt on, and tighten it all up again my tea should be brewed to perfection! With my tea brewing I turned my attention back to my single bolt. 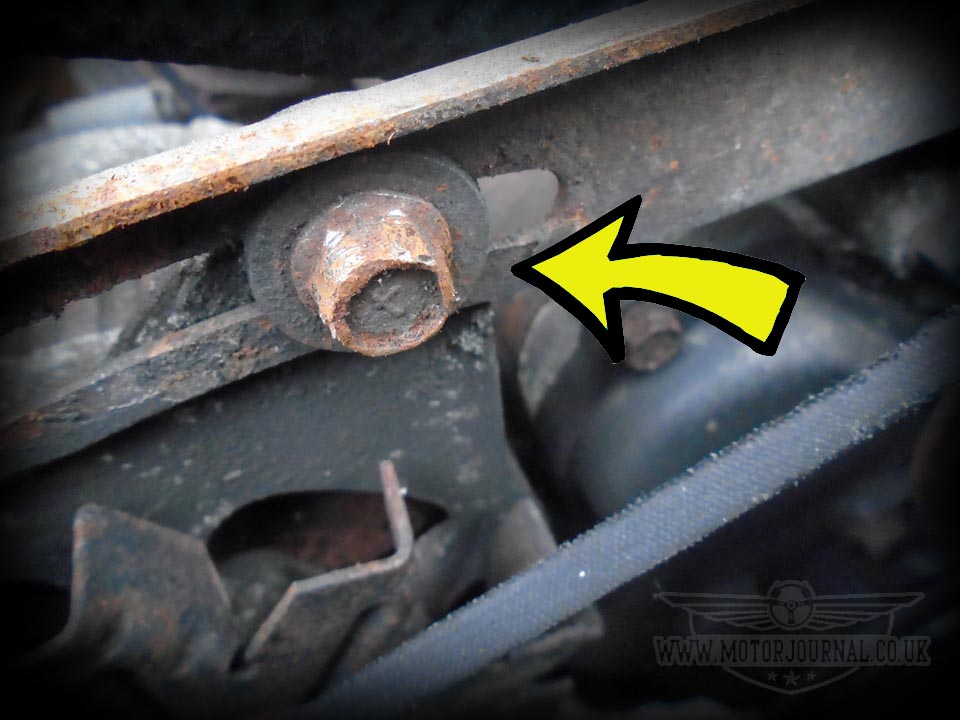 That one. Looks easy enough, and it was easy to get to. Right then, that looks like a 12mm bolt head to me, so onto my ratchet went my 12mm socket. Nope, that was too big! Ok, 11mm, nope, that was too small! Damn! I'd left my imperial socket set in my garage. I jumped into the Daewoo, and headed off to get it. Not that they would be any help either, the 1/2" socket of course was far too big, and much like the 11mm socket, the 7/16" socket was far too small! Right, out with my adjustable spanner! Adjustable spanners are great if the nut or bolt you're trying to work on isn't too tight, this was of course murderd up hard, and so all that did was round off the corners of the bolt head until that was no use either! That thing was stuck solid, one bolt, ONE BOLT was all that stood between me, and by now a very strong cup of tea! I worked my way through my tool box trying every type of spanner I had, nothing was moving it. In the end out of sheer desperation I decided that the way forward was to use my old Footprint grips. I've not used these since my old pipefitting days, but I managed to get them on, and after a fair bit of heaving, straining, and swearing, that 12mm (or whatever) bolt was on the move! Man alive that thing was tight! The fan belt slipped on as easily as it should have, and I re-tighted the now quite chewed bolt back up as best as I could with the Footprint grips. I fired the Celeste up... Screeeech! Hmm, obviosly not quite tight enough. No matter, I slackened the nut off, and put my pry bar between the alternator, and the engine block, and gently levered it out to tension the fan belt. Once more I tightened the heavily chewed bolt back up, and stated the Celelste. Again, it screeched, not as much as the first time, but it still screeched, so it was still slipping. After a couple more attempts it would appear that for some reason or another I cannot tighten up the alernator tensioning bolt enough with the Footprint grips to stop it from slipping. A quick rummage through my old nuts and bolts jar revealed that I had nothing that was really up to the job, the bolts I have all have the wrong thread, as they all appear to be metric. So I'm wondering now if the way forward is to simply drill out the alternator, and use a long metric bolt with a nylock on the other end, or see if I can simply just buy the right bolt. 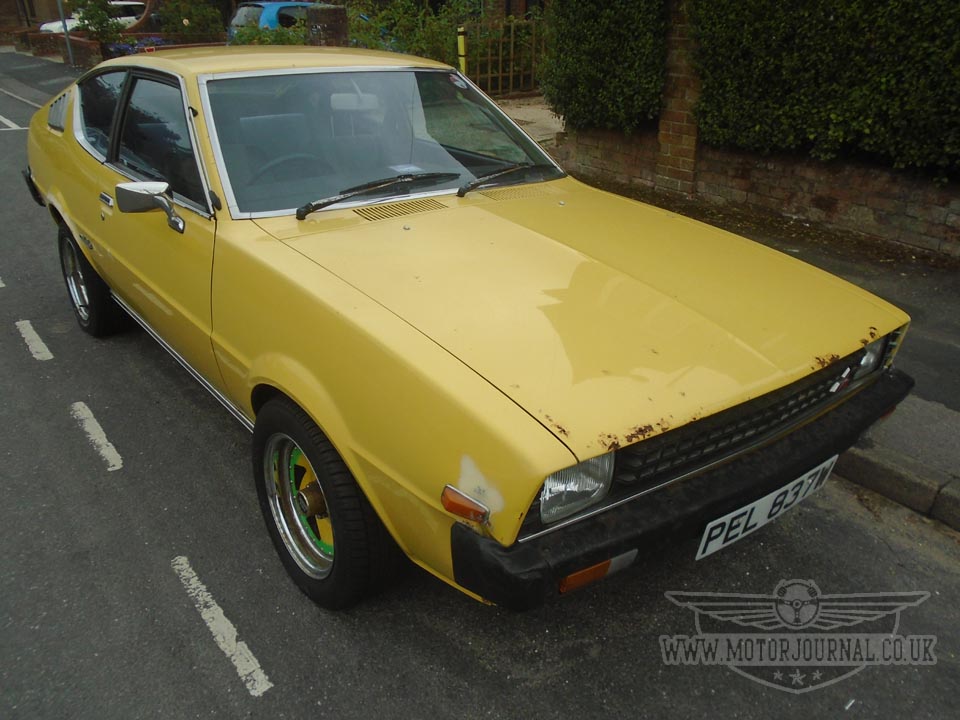 A short while later I decided to admit defeat, close the bonnet, and head inside for my cup of tea. My tea, having been brewed for nearly three hours at this point, was cold, and like bitchumen... Time for a fresh cup, and some thought about where to get the correct bolt from!