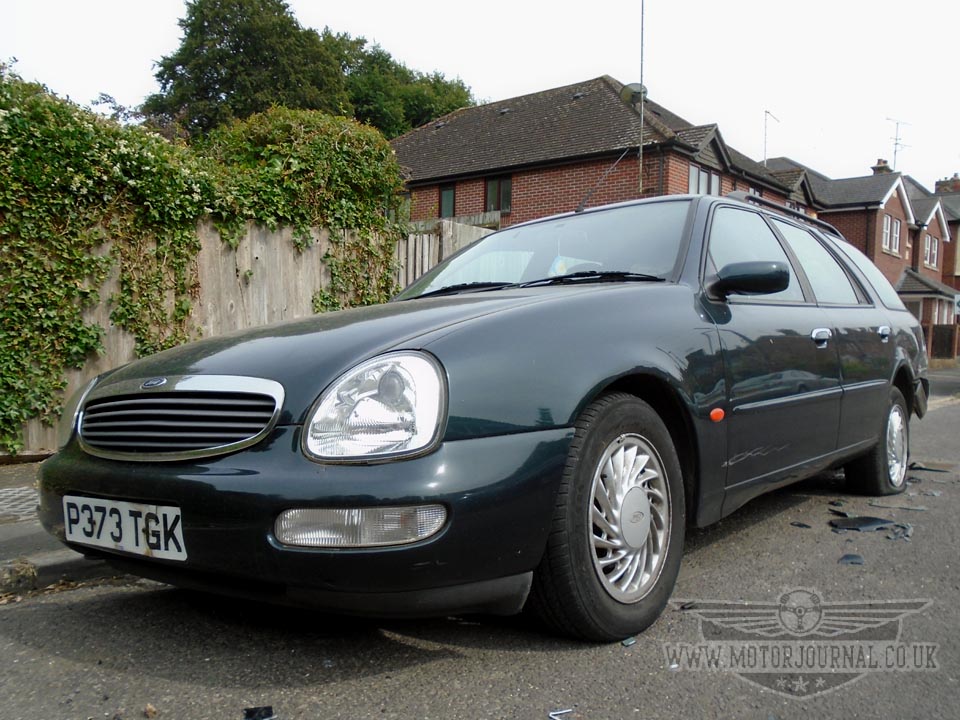 But worse than that, it's not even because I don't like it. I do like it, and I do enjoy driving it. It is a very good car to drive, and I have found that for the most part is is very pleasant to drive. I will admit, that I don't enjoy it as much as the S-type, but in all honesty it's a pretty close thing. Mechanically it's great too. It would appear to be quite reliable, and in good running order, although I have to say that it is a lot thirstier than the S-type, which is a bit of a worry as the S-type had a whole litre larger engine capacity, but the Scorpio is a lot older, and, lets face it, a Ford and they always seemed to like a drink! So it's good to drive and in good running order, so what could be the problem? 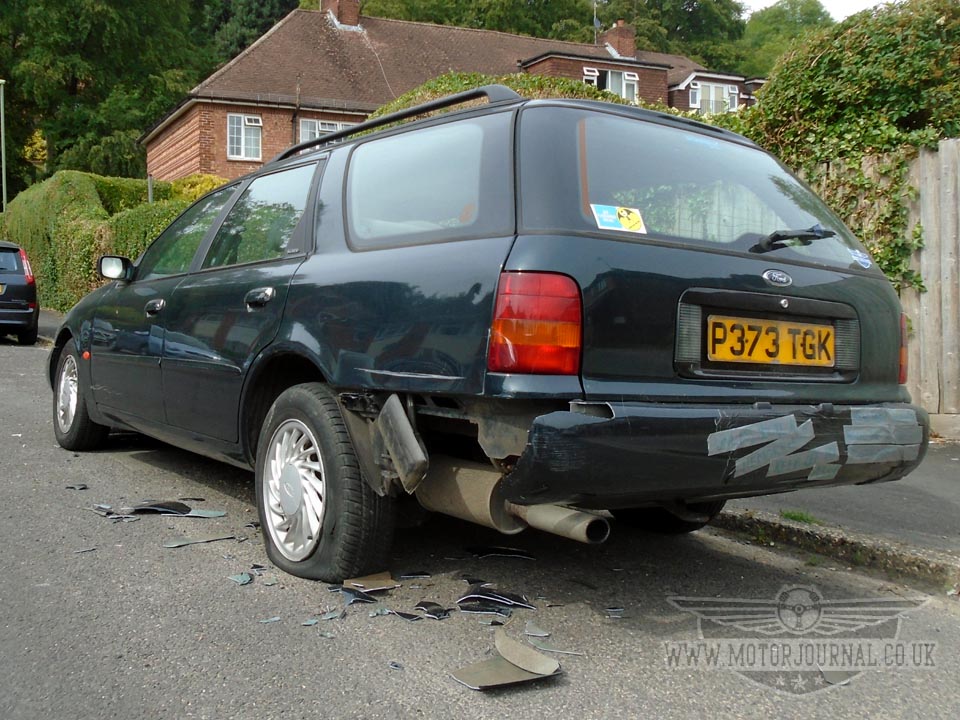 I went to take it out on Saturday after parking it up on Friday evening, as I came down the road to my car I could see that there was a problem from about 200 yards away! As I approached it I could feel the despair building up inside me. Parked in the middle of a straight piece of road has someone really hit it again? I knew the answer the closer I got, actually, I knew the answer from 200 yards away! As I walked towards it I wondered if the driver of the car that had hit it had perhaps left a note... Of course not! Why would they? Surely the realised that they had hit something, you can't tell me that you can make this amount of damage to another car and not realise you'd had a crash could you? 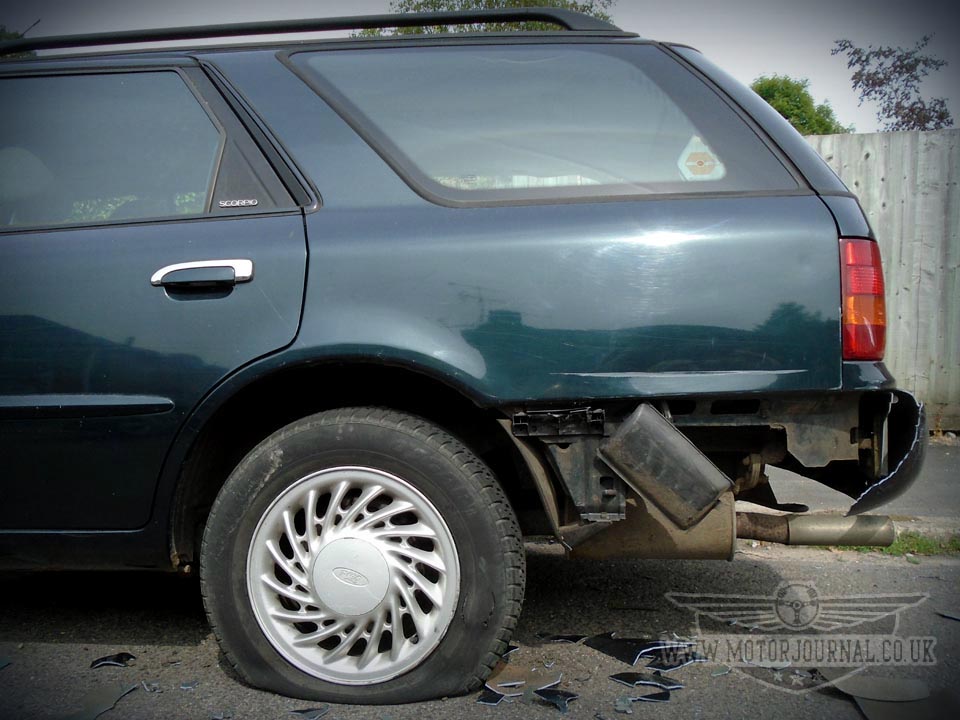 So now I'm not only looking for a rear bumper, but also a tail light. To add insult to injury the rear wing also has a rather splendid new crease in it! I dunno, I think I preferred it without if I'm totally honest! To tell the truth I was pretty damn urinated off with the whole thing. There seems to be a complete lack of common decency in the community these days, and nowhere is that more evident than on the roads. It seems to be acceptable behavior to not bother acknowledging another motorist who lets you out of a junction, a simple wave is all thats required. But the only time you get any kind of hand gesture seems to be when someone is upset about your driving, like when you're not going fast enough. It seems to have become acceptable to bash your doors into another persons car in the supermarket carpark. Or even bump into their car in the carpark without accepting the responsibility for what you have done. Finally now we seem to have got to the point where it's acceptable to crash into another persons car, leaving debris scattered for a whole car length infront of it, and then just clear off without taking responsibility for your actions. I don't know what good bitching about it is doing, so I guess I'll just leave it there... For now! 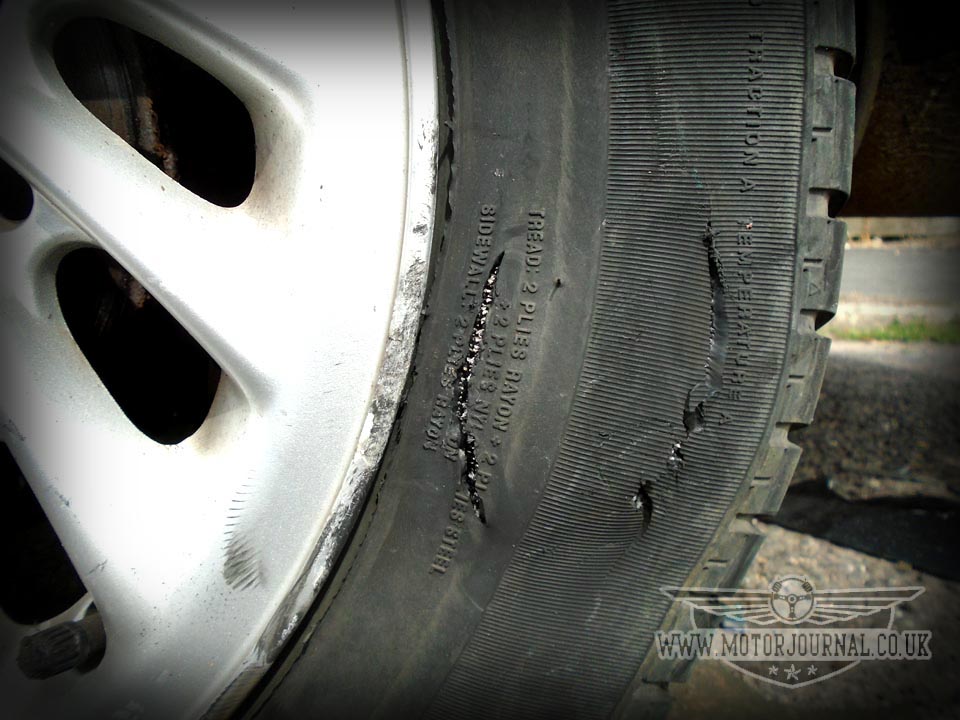 But they must've hit the Scorpio pretty hard to do that to the tyre, so I'll add a tyre to the list of things to find to make the Scorpio better again! As I started to clear up the thousands of shards of my bumper two things popped into my head. Firstly, a 1996 Ford Scorpio bumper shatters like glass when it gets hit, and like glass, the shards are razor sharp! Secondly Whatever hit it must have some fairly extensive damage its self! As I sat there collecting the bits I was approached by a couple of the neighbours who told me that it happened at 03:02hrs Saturday morning, and it was a dark coloured car about the size of a Mondeo that did it. One of the neighbours went on to say that they were pretty sure the driver of the car was drunk, just by the way they took off after they'd hit it. Unfortunately the two guys I talked to didn't manage to get a registration number, but they did report it to the police. Whatever good that will do I don't know. What I do know however is that after studying the fragments of my bumper it would appear that whatever it was, it was dark blue, as it seems to have left some of it's paint behind on mine! outside of all of that, I've not got a clue, how many dark blue cars are out there? I dunno, infact about the only thing I do know is that a Ford Scorpio Estate rear bumper is about a rare as Unicorn pooh! But I need one, a bumper that is, not Unicorn pooh, I don't need that, I don't think anyone needs that! 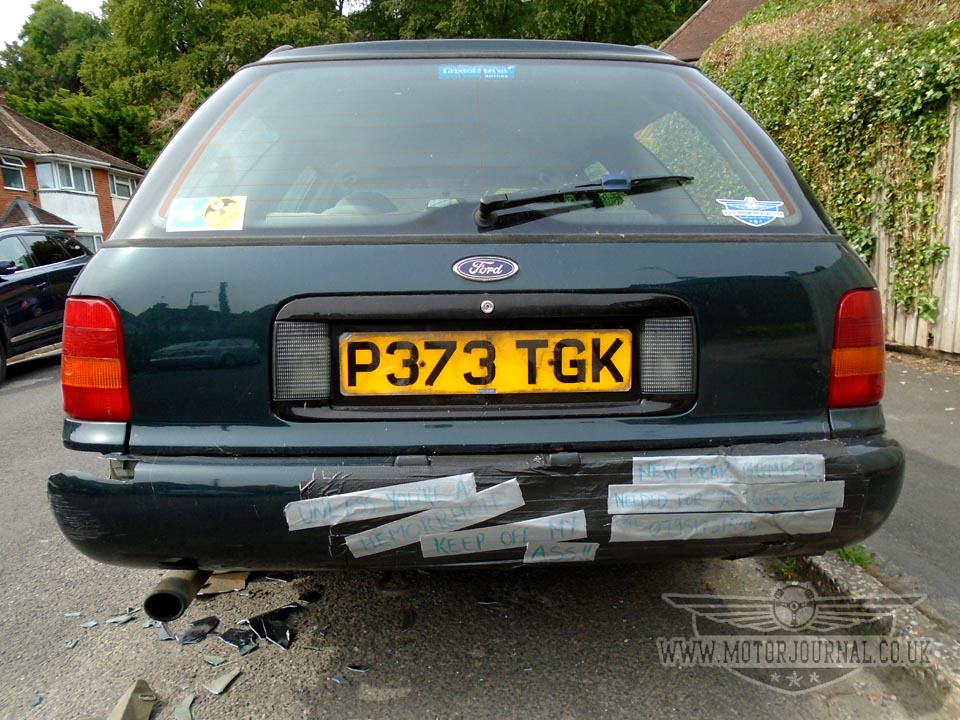 I'm at a point now where I'm thinking about adapting something to fit. The rear bumper of the Scorpio saloon is completely different to the Scorpio estate as it has a indent for the rear number plate. However, after a fair amount of internet research it would appear that the 1994–1998 Ford Scorpio has a wheelbase of  109.1 inches, or 2,770 mm if your young! The Ford Scorpio estate is 190.0 inches in length, for you younguns out there that'll be 4,826 mm. The Ford Scorpio Saloon is also 190.0 inches in length, again, for you younguns out there that'll be 4,825 mm so actually there is only 1mm in it in length between the estate and the saloon. Surely this means that the rear bumpers are the same length despite being slightly different to look at doesn't it? The question is, should I manage to find a saloon bumper, where do I put the number plate if I can get the bumper to fit? Keep it in the tailgate, or have it in the bumper? I'm probably getting ahead of myself there, I've still got to find one first! But atleast having the option of fitting a saloon bumper, may make finding any Scorpio bumper a tiny bit easier... Hopefully! 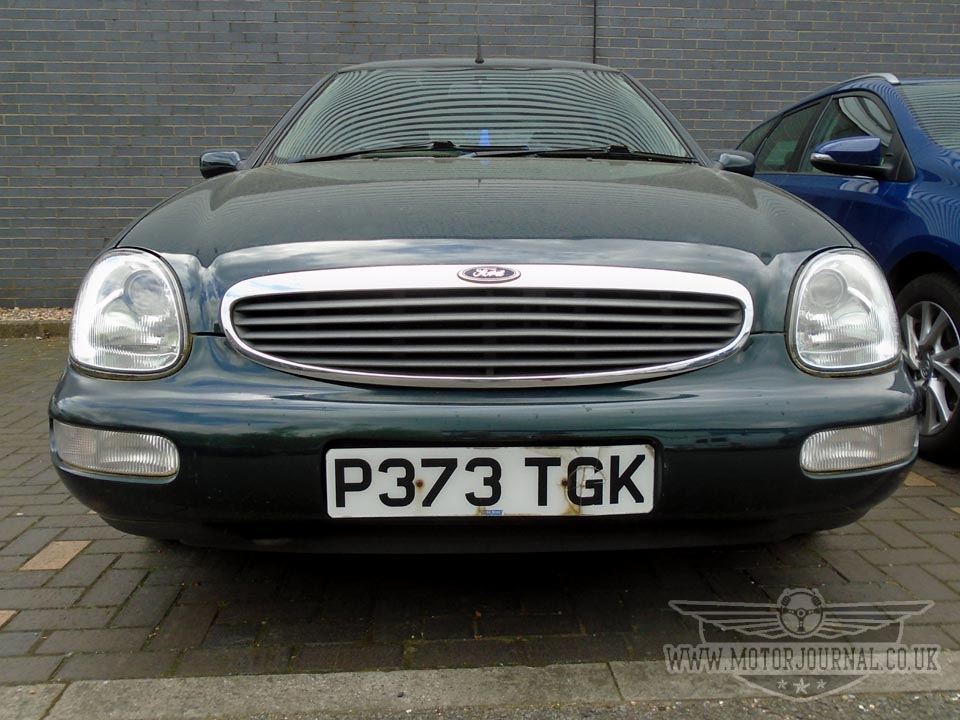 Funny how everyone complains about how ugly the front of the Scorpio is, yet its the back that people keep smashing into! The front has remained relatively unscathed... I hope I haven't just tempted fate there! But so far in the few months that I've owned this I've had someone beat a supermarket trolley into the door, and three different (presumably) people crash into the rear bumper. Alright people I get it, it's an ugly car, but beating into it isn't improving it's looks! Besides, I like ugly things, just ask Mrs Clint! Actually don't ask her, or my Scorpio won't be the only thing that's taking a beating! I don't know where I'm going to go with the Scorpio at the moment. I want to keep it, and I want to drive it and enjoy it. It's just that the constant damage it seems to be getting does seem to suck the pleasure of owning it out somewhat! I guess that the only silver lining to this story is that atleast I hadn't already managed to track down a new bumper for the back of it and fitted it... But you've really got to want to see it in order to see that silver lining!