February 27, 2018
As I mentioned in my previous post about the Jag I have already found a replacement for it. I'm an not replacing it out of necessity, but ebayland provided some fruit, and I plucked it! So here and now I will reveal my latest purchase, a 1996 Ford Scorpio estate. 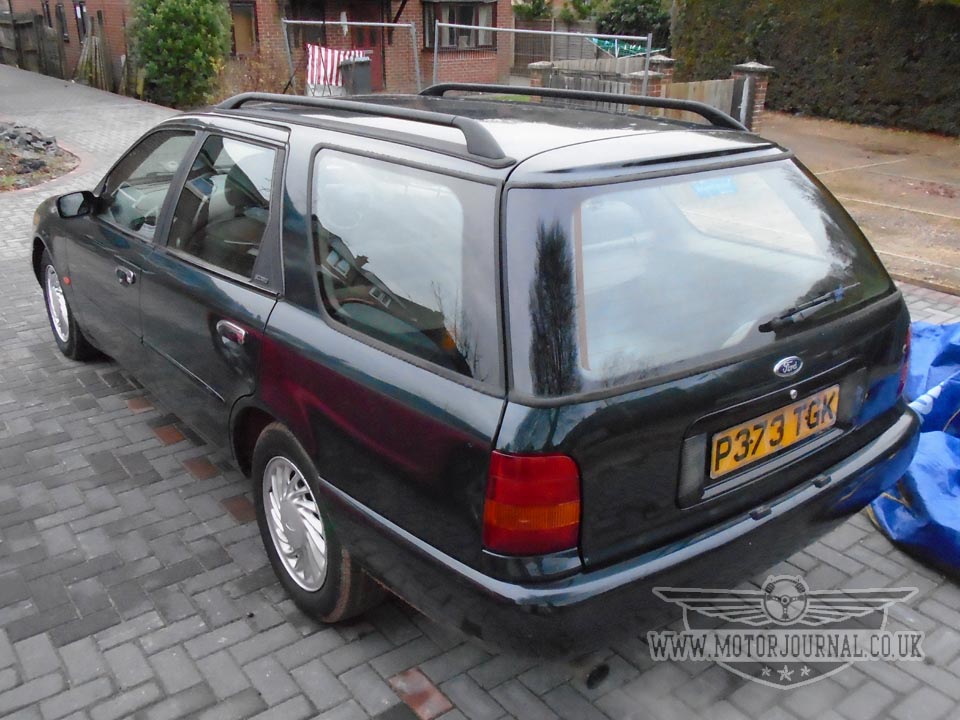 Why an estate, and not the hatchback or saloon? Well, simply put I prefer the estate. I like estate cars they look better to me than hatchbacks and saloons. Infact, it's my third favourite body style, after coupés and pick ups. My guess is that this is because my childhood was spent riding around in the back of estate cars as both my Dad, and my Mum had them. They have become ingrained in my psyché as the bodystyle to have. This is my first Scorpio, although I have previously had one of the last Granada hatchbacks before they became the Scorpio. Back in the mid nineties my Dad had a Scorpio estate much like this one, except it was dark blue. It was the first car that I ever drove to over 100mph, and I actually drove my Dads Scorpio at 134mph along the autobahns in Germany, I even kept that speed up for over an hour! My Dad loved his Scorpio, and so I thought he would probably like mine too. However, I showed it to him and his response was, "Ugh!! It's GREEN!!" Yep, I said, it's green... I like it! 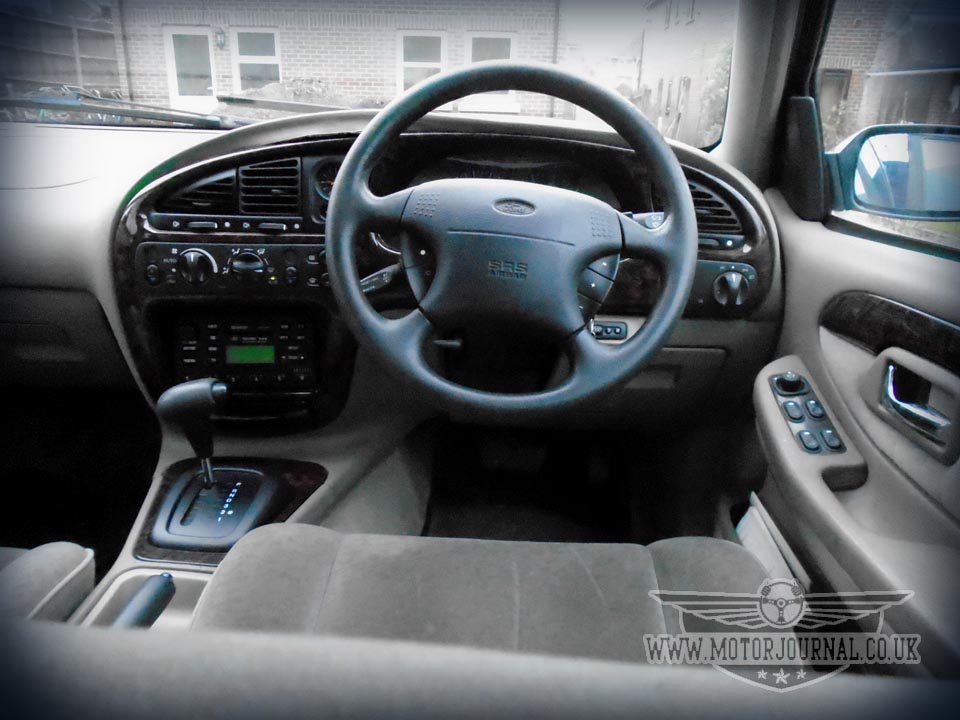 But it's not all green, inside the cockpit it has been upholtered in shades of beige, I have beige carpet, beige velour, and beige vinyl! All of this beigeness is accented with plastic wood, which gives the interior a real feeling of class!! I must admit the interior of the S-type is a far more pleasant place to be, however the interior is in good shape, and fairly comfortable. The only downside to the interior is that the dashboard has become a little mis-shapen above the gauge cluster, but atleast it's not cracked! Under the bonnet lurks the 2.9 litre 12 valve Cologne V6 engine, coupled to an automatic transmission. It would appear to be in good condition and with just over 83,000 miles it pulls pretty good, and drives very nicely indeed. I pretty much had this engine, albeit in 2.8 guise in my Sierra XR4i in the mid nineties and until I bought my first S-type that XR4i of mine was the fastest car I'd ever owned! Therefore I'm guessing that this will be no slouch either, not that I really do much in the way of top speed anymore, I gave that up years ago! Now then, on to the bodywork, I can't put this off any longer... 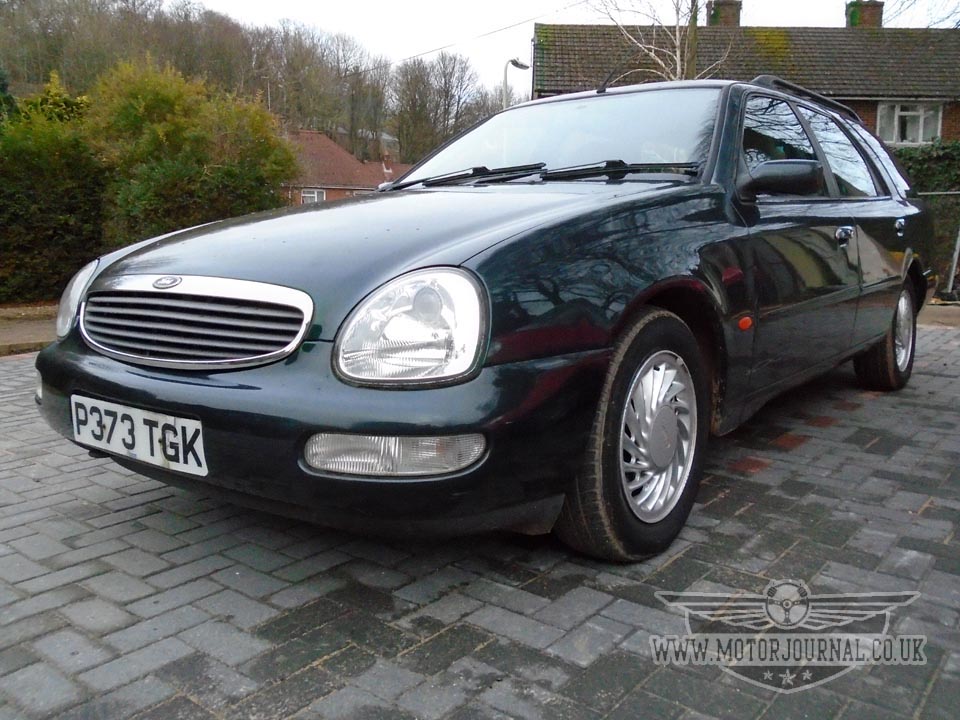 Yes!! It's the ugly Scorpio! I realise that the public and press reaction to the design was largely negative. Contemporary reviewers wrote that the car had a stupid grin, gormless mouth, droopy nose, dopey eyes, revolting stupid headlights, a fish-mouth grille opening, fat flanks, a reptilian gurn, and that it looked mixed up, boxy yet curvy, gargoyle-ugly and bug eyed monster that David Attenborough might reveal from a dank cave in Borneo. But I actually think this is an eye of the beer-holder thing because for me, I actually prefer this front to the more Sierra-esque face of the Granada that it would hve replaced. I like the bold, quirky design of the Scorpio. I liked it back when It came out, and I like it now! Besides, I think it's design was cutting edge,and perhaps just a decade or so ahead of its time. Its face is not really that much of a departure from the likes of the first generation (1994–1999) Chrysler Neon, the first generation (2000–2006) Mini One, or the second generation (2000–2007) Subaru Impreza. I think the thing was, that at the time, there was simply nothing like it, it was perhaps just too different, and too much of a shock for the general public! But that said when the Sierra was released the general public didn't really care for that either with its jelly mould design, so perhaps like the Sierra was too much of a jump from the styling of the Cortina, maybe the Scorpio was too much of a jump from the styling of the Granada! I dunno, what I do know is that Jeremy Clarkson wrote in The Times at the time that it was a gopping hideous monstrosity with village idiot features and a loopy face, and he should know, he's sees one of them every day in the mirror! He then elaborated later on that the Scorpio ended any argument as to which car was the ugliest on the road, and that the car resembled an extra from Finding Nemo! He went on to say that  it had a face of such unparalleled awfulness and that it would make children cry! With this in mind I took my two little monsters to see it. We approached from the rear, and all seemed good. I asked them what they thought of it, and they said it looked ok so far! Then they saw the front, and they pretty quickly told me that it was the ugliest car they'd ever seen! My eldest daughter actually refused to be driven home in it, saying that she would prefer the half mile walk back to BelongaClint! She did however retract that remark when we passed her as it started to rain! 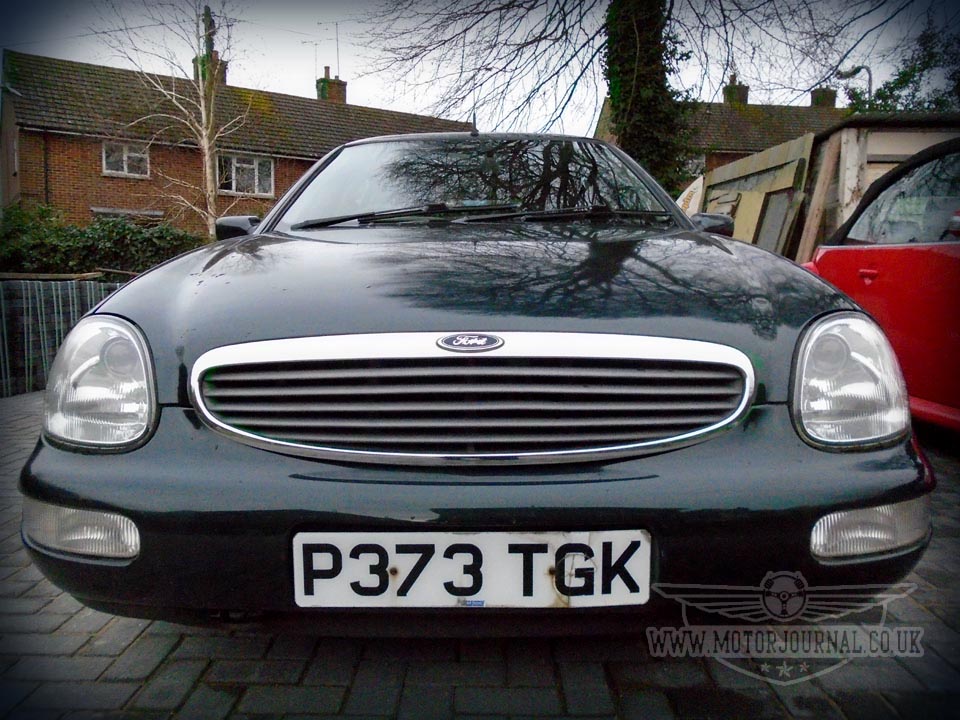 So there we have it, the first purchase of the year. Love it or loathe it it's certainly a striking looking car, and although I don't think it's anywhere near as nice as the Jaguar I think it will stick around in my collection for a while as I've wanted one of these for over twenty years now.