November 26, 2017
Now, as you know if you've been reading my blog of babble for long that my Carlton has failed it's MOT in spectacular fashion! After the MOT, the MOT inspector came out with a fistfull of failiure sheets, infact I've never seen so many for just one car! I contacted my friend Aunt Fanny who has a paint and bodywork emporium. I was told not to worry, bring it down and we'll have a look at it! So it was loaded onto my trailer and I headed off for Aunt Fannys workshop. 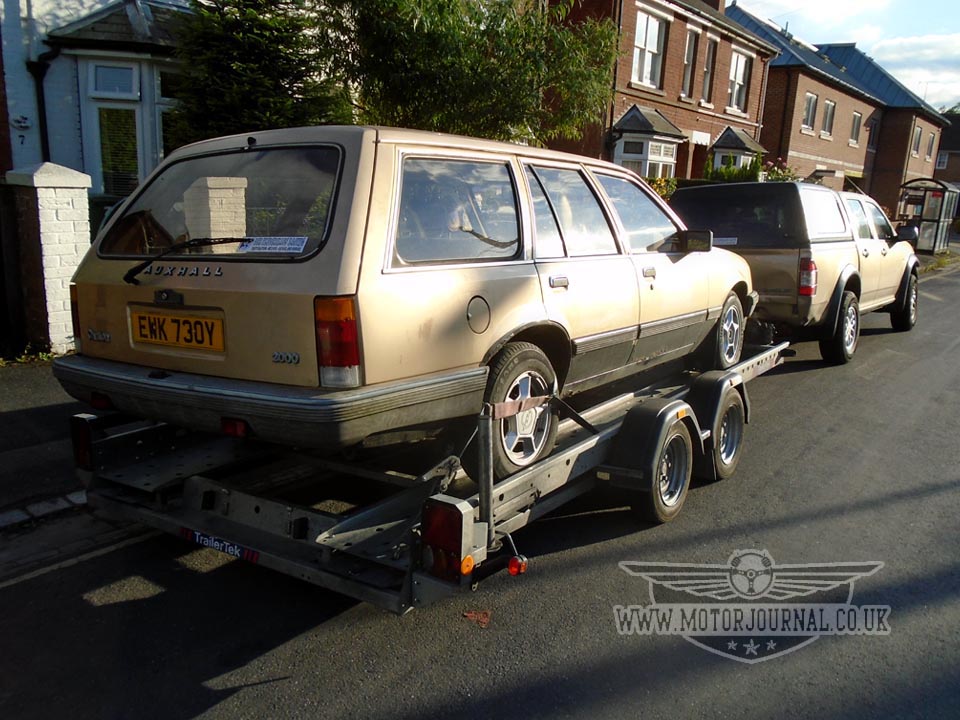 Once the Carlton was unloaded and put on the table at Aunt Fannys the first thing we did was have a good prod around, and the more we proded, the less we had to prod! This was followed by my friend and I sitting on the floor while I had a cry! It IS bad! Actually it's far worse than probably even the MOT inspector thought! Infact, it probably hasn't been safe to drive for a very long time! 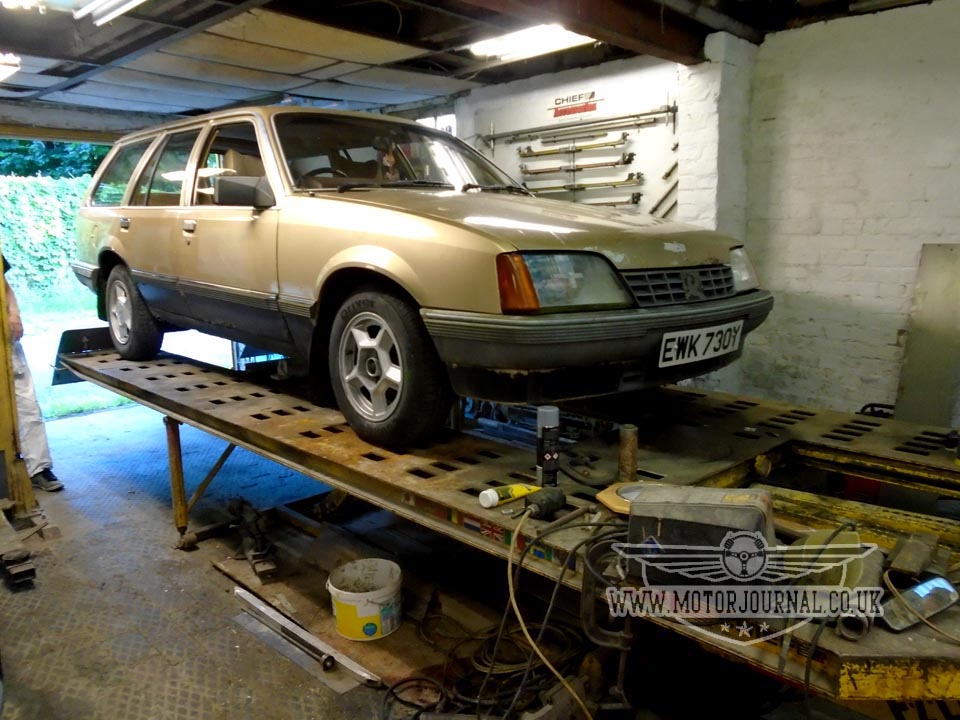 So it's currently perched on a table looking very sorry for its self! Actually, in these two photos it doesn't look too bad, but underneath there really is next to nothing left! My friend said to me that he would like to comfort me by saying not to worry, it's not too bad, but unfortunately he couldn't as it was really REALLY bad! 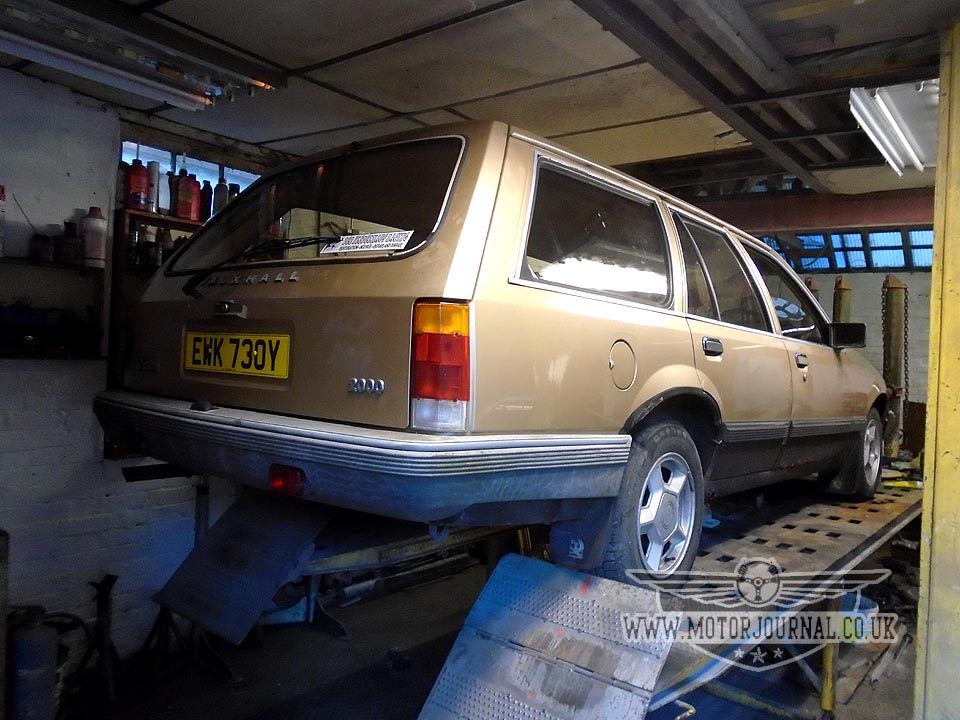 But, I have to say that I am quite lucky in a way, because my friend understands that finding another one will be hard, and we might end up no better off, so he said, what shall we do? What's the plan? So I said that I really didn't have a clue, and asked him what he thought. He thought that what we should do is go out and find a nice V6 Omega, like my previous venture into Vauxhall estate car ownership, seen below not in it's finest moment, broken down by the side of the autobahn! 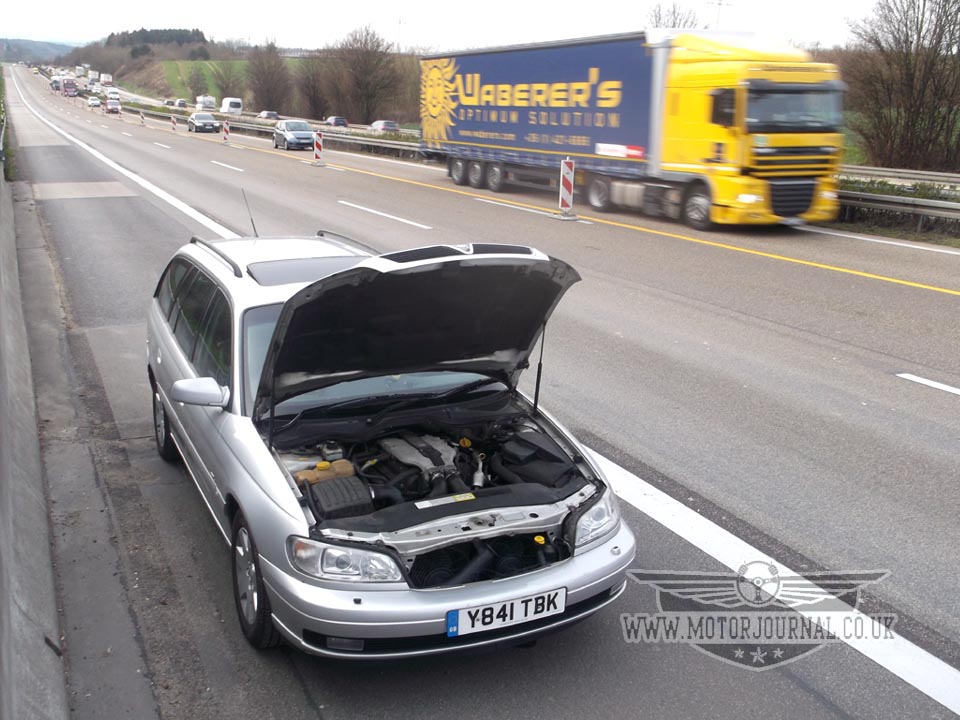 Chop the body off the Omega, chop the floor out of the Carlton, then glue them back together with the hot sparkly stick! I sat there, letting his words of wisdom penetrate my feeble brain, before saying, ok, lets have a measure up! Before too long we had the measurements for the Carlton, Starting with, what I consider to be the most important measurement, the wheelbase which was about 105 inches. The car itself is about 182 inches long, and 68 inches wide. Good, now we have something to work from we thought, right, go out and find an Omega to measure! It took a while, but eventually after driving around all the carparks in town I spotted an old guy filling up at the petrol station. I pulled in and wandered up to the old fella and asked him if he would mind if I measured his car up? He was a bit dumbfounded and my request, but he said that it would be ok. Good, so, out with the tape measure. The all important wheelbase was 107.5 inches, the length was about 193 inches, and the width was about 70 inches! Good, so as expected the Omega is slightly bigger everywhere. Back at base we looked long and hard at the difference in measurements. It was decided that we could chop 2.5 inches from the middle of the Omega to get the wheelbase right. With that removed there would only be another 8.5 inches to lose from the over all length of the floorpan, which should be easy enough, most of that would probably be lost from the boot to be fair! This just leaves the difference of 2 inches in width, and this, it was decided just meant that the wheels would fill the arches better! So that was the plan. I thought it was a good plan, it meant that it would have a V6 engine with plenty of power, decent brakes, decent suspension, it was going to be just epic! Then I had a thought, if we did this, would it not need a BIVA? We discussed this at length over a bit of a brew, and after a bit of research we thought that it probably would need a BIVA... Oh BOVVER!! But worse than that, it seemed a sketchy area to chop the floor pan out of one car, and weld it in place in another. I probably have this wrong, but it looks like if we weld the floorpan from an Omega into my Carlton, it may not even pass a BIVA test? We thought some more, did a bit more research, and finally my friend said, "But who would know? What MOT inspector is going to look under there and go, no, thats not a Carlton floorpan, thats the floorpan from an Omega?" I must say that he's got a point, I mean who would know (apart from you guys obviously!), how would they find out? If we did a good enough job, once it was all welded, seam sealed, and painted under there nobody will know that it's not a Carlton will they? But, the trouble was that by now I was starting to think that I didn't want it to be an Omega underneath anymore, I wanted it to be a Carlton. Something will be lost from the driving experience if it's too good! I can't believe that I'm writing this, but I want it to be more of a restoration, so it's as it left the factory... Well, more or less! So after all that research and discussion we were back to where we started, with a very rusty Carlton, and wondering where we go from here! A list was made that looked more like a scroll of work we needed to do. We then turned to the body, removed all the glass carefully. Then turned our attention to the rusty body panels! I said to my friend that as we are going down the resto route, I wanted it done properly, so any rust we found was to be chopped out, and filled with fresh steel. Any panels that were rusty would be replaced. Before too long it was apparent that I was going to need a new bonnet, front wings, valence, doors, sills (obviously), rear arches, the lower edge of the rear wings, and a new tailgate might be good too. However the good news is that the roof looks to be fine! Currently I have located most of the parts in either very good, rust free condition, and in some cases, brand new! However, none of these parts are in the UK, they are all spread across mainland Europe. I'm thinking, roadtrip! Probably with a trailer, lets just hope it goes better than my first attempt at towing a trailer across Europe!