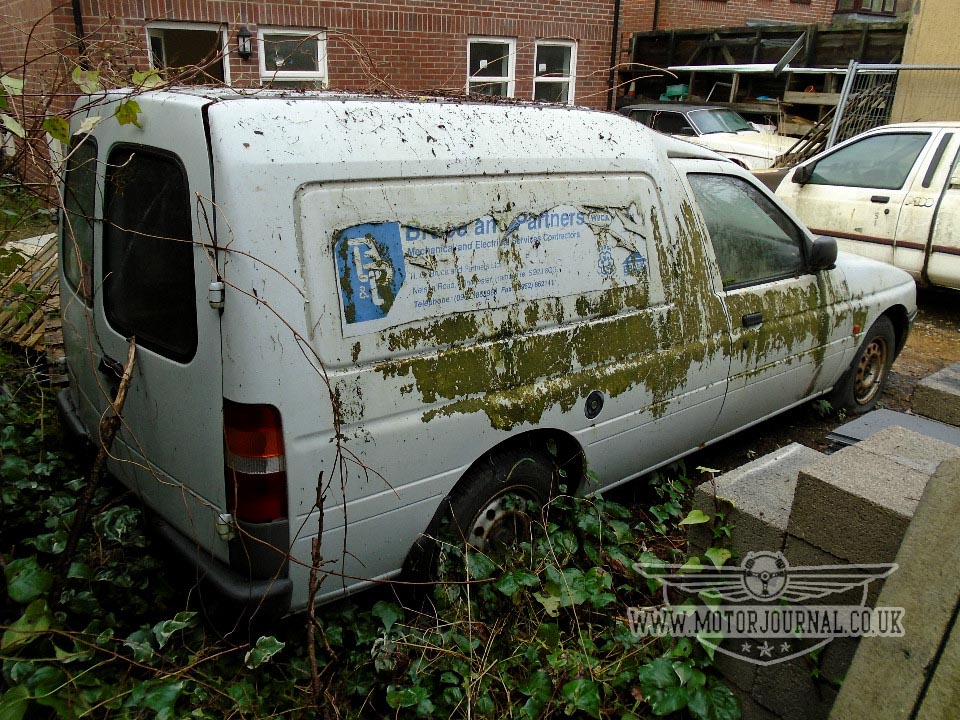 With the previous sale of the two Mustang projects it was still apparent that I was fast becoming that guy whos field you see on the internet thats full of cars that are rusting into the ground. Like that guy at some point I had acquired all of these because I liked them, and now they're starting to get beyond repair because I don't have the time or money to do anything with them... 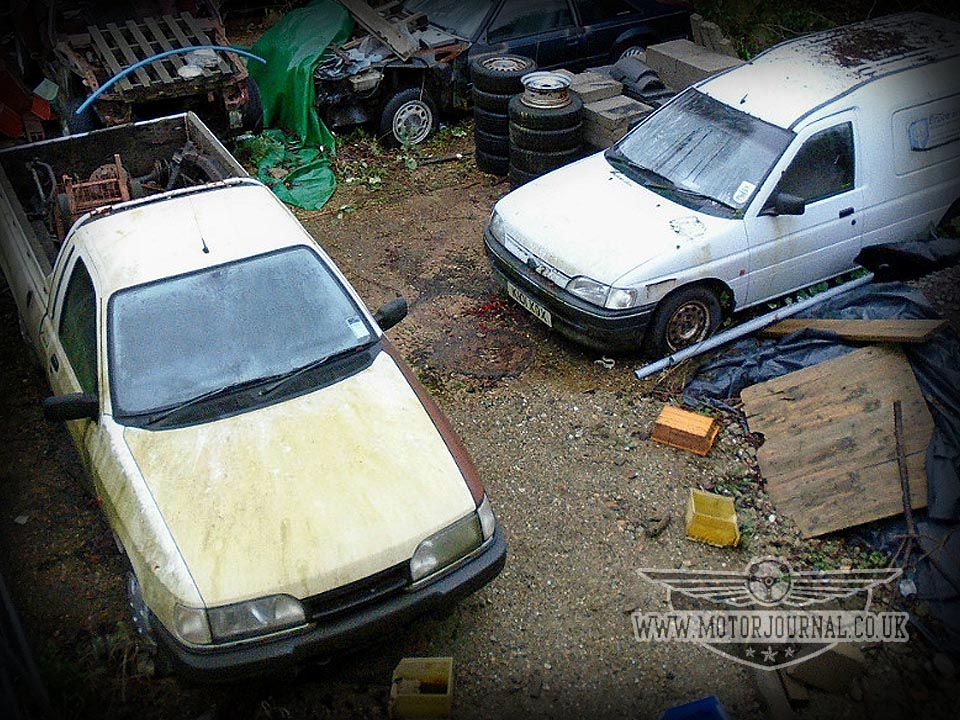 The sale of the two Mustangs at the top of the picture got me thinking, that guy on the internet with the field of cars? That's me (puts head in hands!) What you are looking at here is the tip of the iceberg. I started off last year with 13 cars, I genuinely am an autoholic, who really should be being treated for autoholism in the Henry Ford clinic right now, but I decided early last year that what I was going to do before the year was out was have a culling of my collection. It came to my attention that realistically I was never going to get around to doing them all anytime soon, so I might as well let them go, free up the space, the time, and the money. This time last year that was the plan... It hasn't really gone to plan if I'm honest, sure enough I have sold some cars, but I've also bought some too! So you could probably be forgiven for thinking that I am still left with 13 cars, WRONG!! I'm up to 20 (I think) now! However, of those 20 six are actually on the road!! So atleast now I've gone from having 25% of my collection being driveable to having just over 33% that I can jump in a go for a spin should I desire! BUT this does of course still mean that 14 cars are projects, laying dormant! Now, the P100 and the Escort that you see in the above picture are stored off road in a little piece of wasteland, however, this is about to be developed, so I've either got to find a new home for them all, or get rid of them. In my heart I know I want to find a new home for them all, but to be honest, if I do, I'll just be paying out storage for them, and still never do them. As you know the two Mustangs were put up for grabs first and quickly found a new home! But this still left me with the P100, and the Escort van, I really want to do them, but I don't have the time, or to be honest, the talent! So I don't honestly know what to do. But, before I do anything, I want to talk about the Escort. 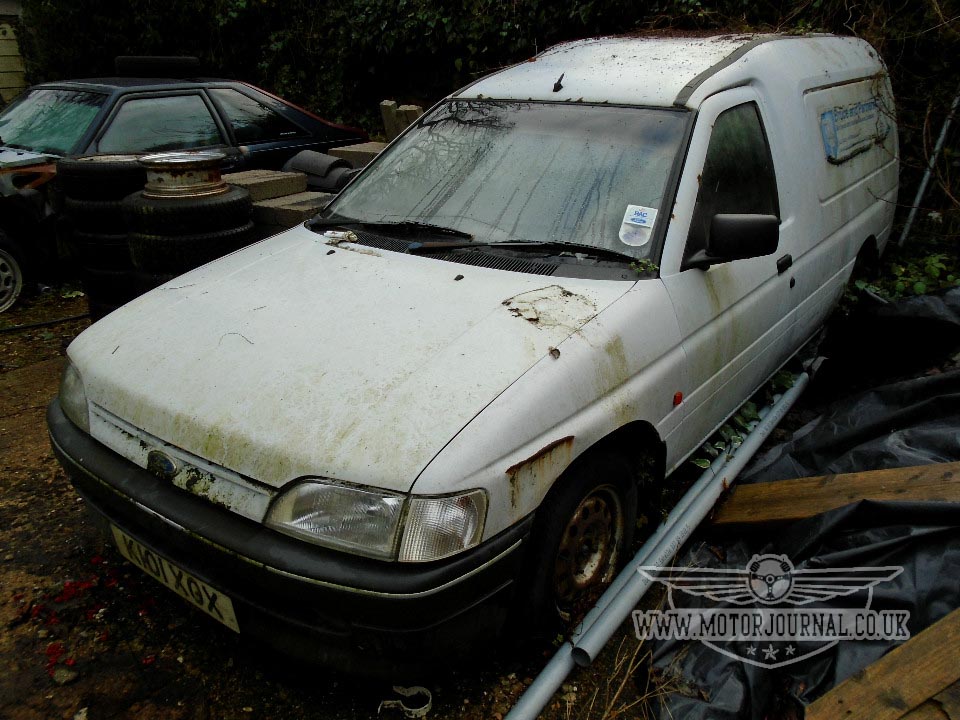 My 1992 Ford Escort van, K101 XOX. I know what you're thinking, that's nothing special. Yep, I'd agree with that, I mean it was ok, but it was just an old mk5 Escort van. The thing is, a long time ago in a galaxy far far away I was a pipefitter, and this was my works van, eventually when I ceased being a pipefitter and went off to college to try and learn to be something else, they let me take the van with me, for nothing! So it became my daily. However time marches on and back in January 2004 it failed its MOT. Various things, cracked windscreen, steering rack, and other bits and bobs. 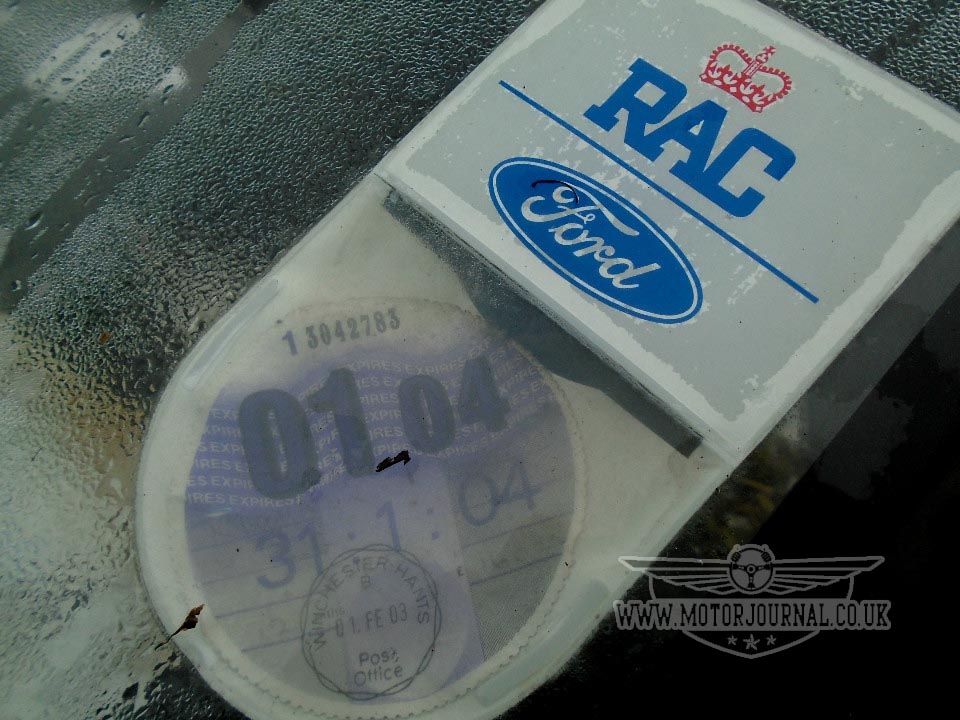 It got laid up, just temporarily though, or that was the plan, but other things got in the way, other cars, jobs, so on and so fourth. It's now been temporarily laid up for over twelve years! As you can see I have been using it to encourage nature to grow! I've actually been using it as a shed, and the back is full of all kinds of spares for all kinds of cars that I might need someday... But what to do with the van? Well, I've decided, I'd quite like to see this thing back on the road! The other reason for this is that I couldn't remember when was the last time I actually saw a mk5 escort van on the road? Infact, I don't think I've seen an Escort of any description on the road for a long loooooooooooooooong time! I know that there's probably dozens of you out there with Escorts, and probably even dozens of you near where I live, but I've just not noticed them. 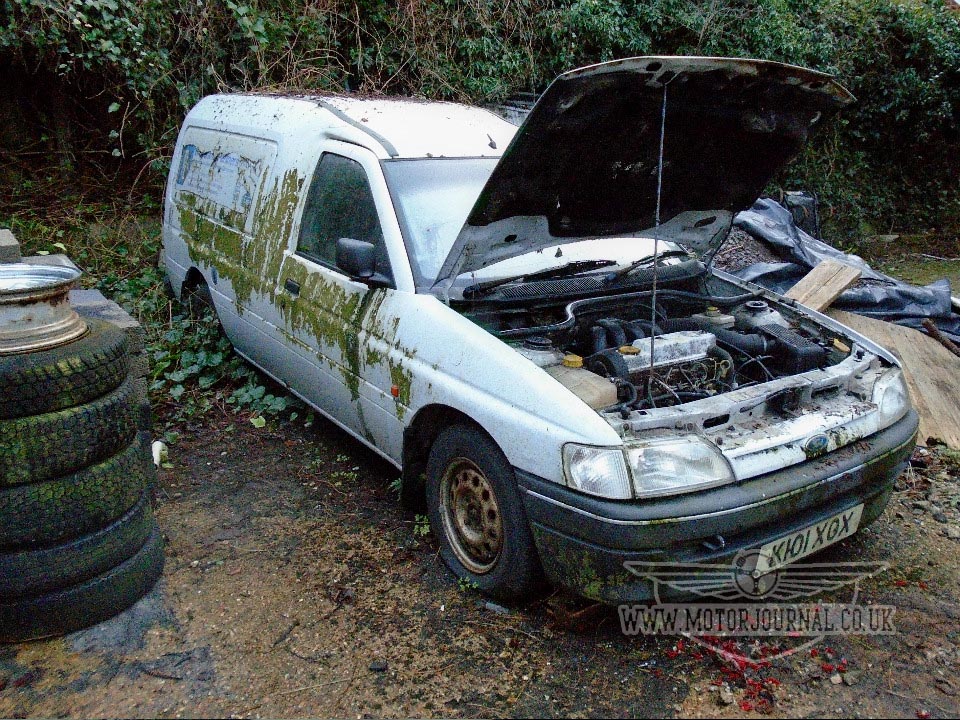 I thought I'd make a start by opening the bonnet, to see what was lurking in there, that was a laugh, the bonnet catch did not want me to see inside, but after quite a lot of gentle persuasion it was opened to reveal... 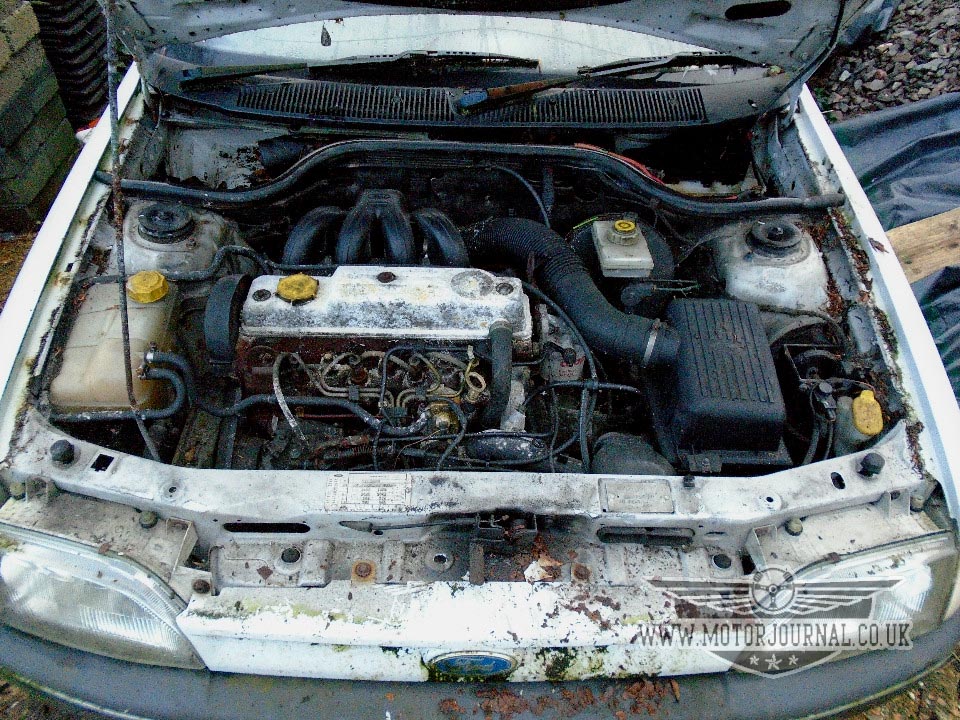 The mighty 1.8 litre diesel engine! Now to be fair to the old thing, when I was still using it this engine ran very well. I had a poke around in the engine bay and although it was full of leaves, and I've no idea how they get in there when the bonnet was shut! But once all the leaves were out of the way it still looked remarkably sound, with very little rust to speak of. Although that bonnet will need replacing, that was quite rusty as you can probably see by the slam panel and bumper! 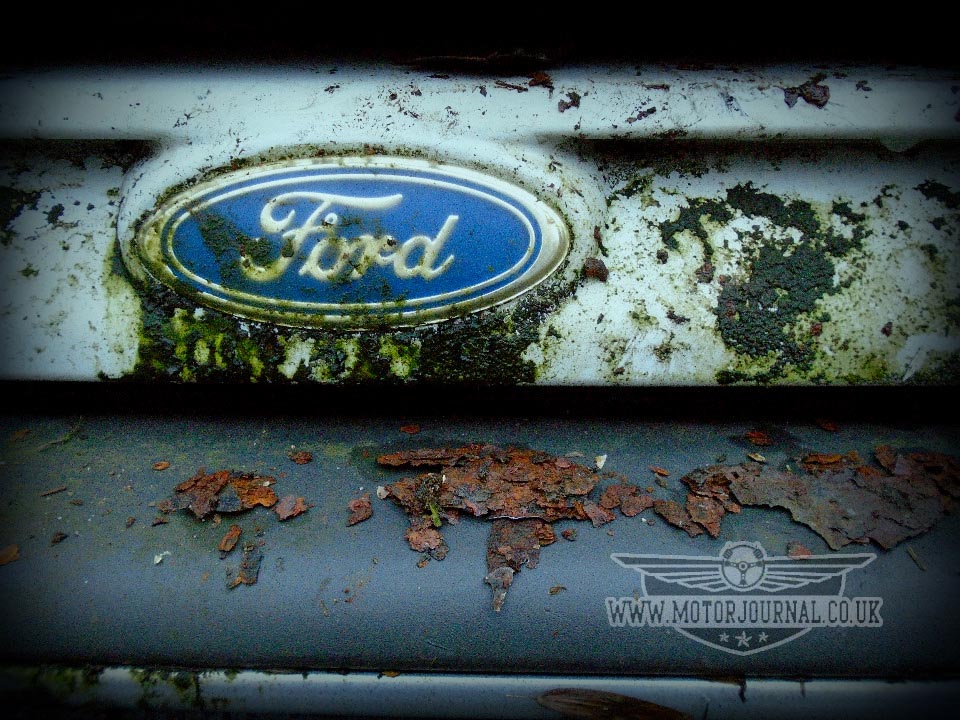 I havn't yet had a poke around underneath, but I'm guessing its going to be fairly bad. It had never needed welding before it was laid up, but I'm thinking that twelve years outside on the concrete won't have done the underneath any good at all! 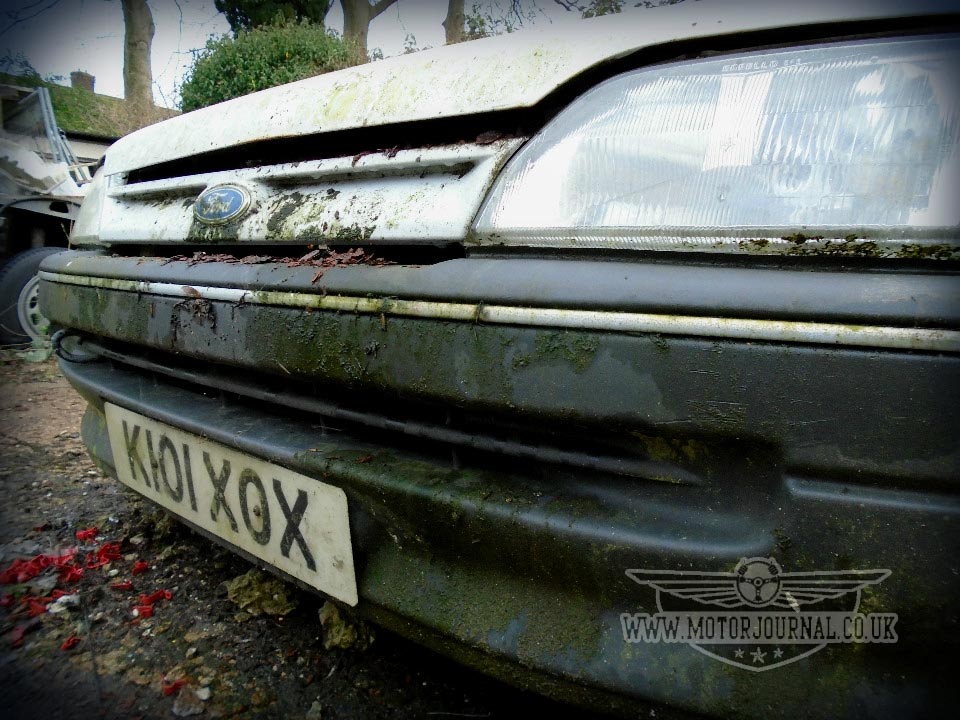 I'm thinking that all in all it probably can be done, but to be honest I've really not got the time or the talent to do it. So much like the Mustangs it's probably time to let someone with more time and talent than me have a go at saving it. Besides, let's face it I've got more than enough rust to deal with in my Carlton!