November 06, 2017
I've had my mk1 Carlton estate for quite some time now so I figured that I'd take it out for a bit of a spin as I've not really had the time to go for a proper drive in it, my seat time being just the odd trip to pick up my little monsters from school at the very most.  First stop was the local multistorey car park to get some photos of it while it's still covered with the stickers that the chaps at Kelsey publishing put on it! I'm not sure if photographing it in a damp, cold, and dark car park adds to the ambience of it all or not to be honest. But not to worry, I wanted some photos of it just for the sake of keeping a Rekord of how it looked! 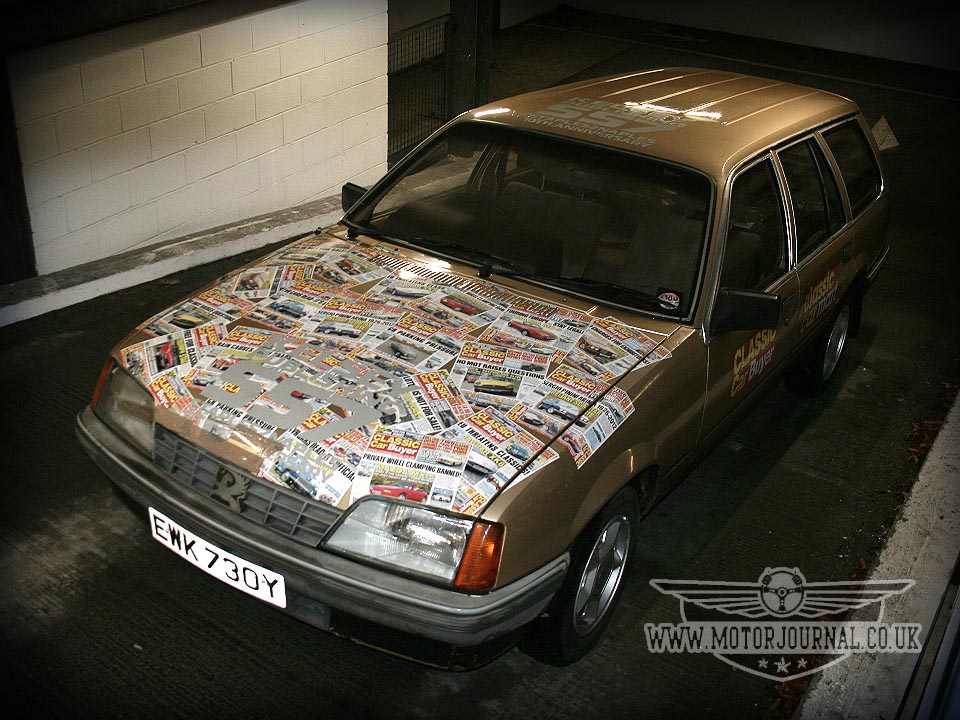 My two little monsters have Christened this "The Stickerbook Car" It's a catchy name, but I wonder what they'll be calling next time they see it? 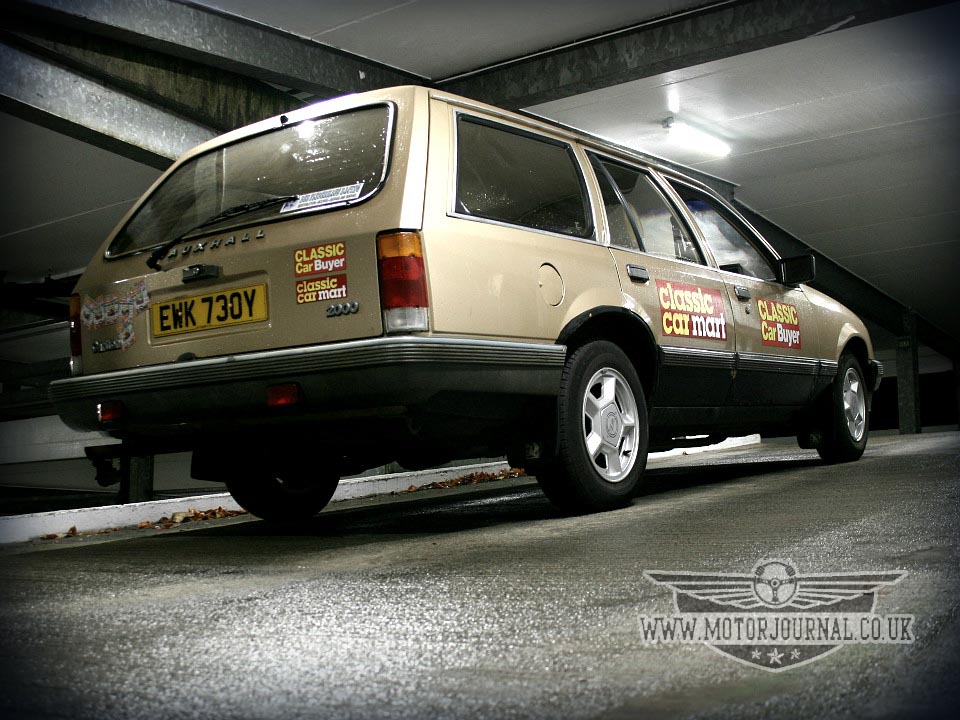 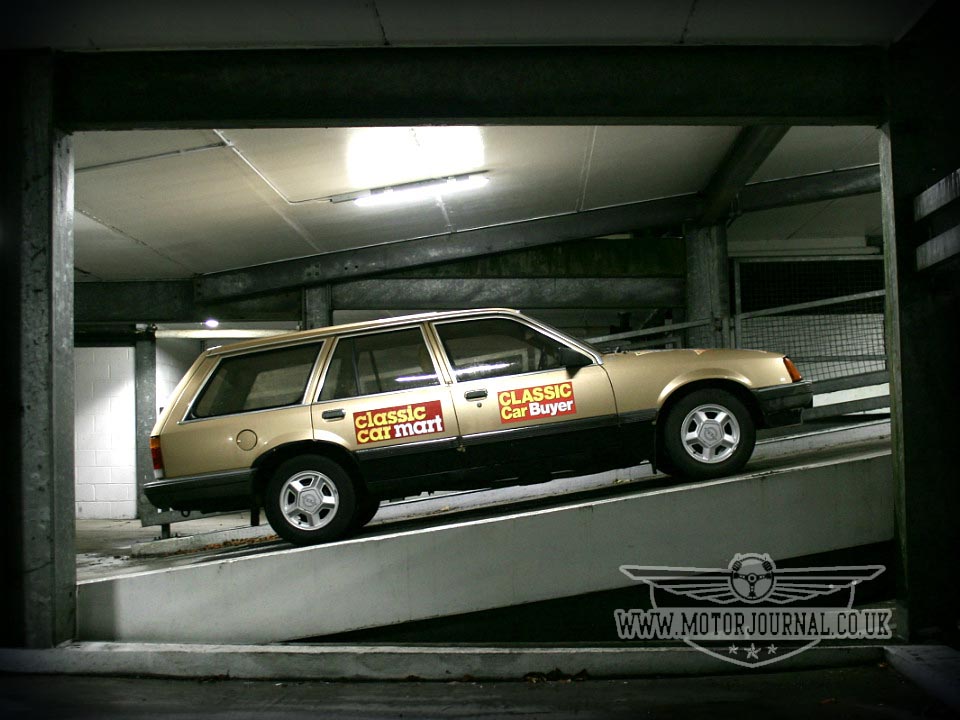 I'm not too sure about all the stickers if I'm honest, but my biggest worry is what they are covering up. It's clearly got some rust, but a mid eighties Vauxhall is bound to be a bit frilly! 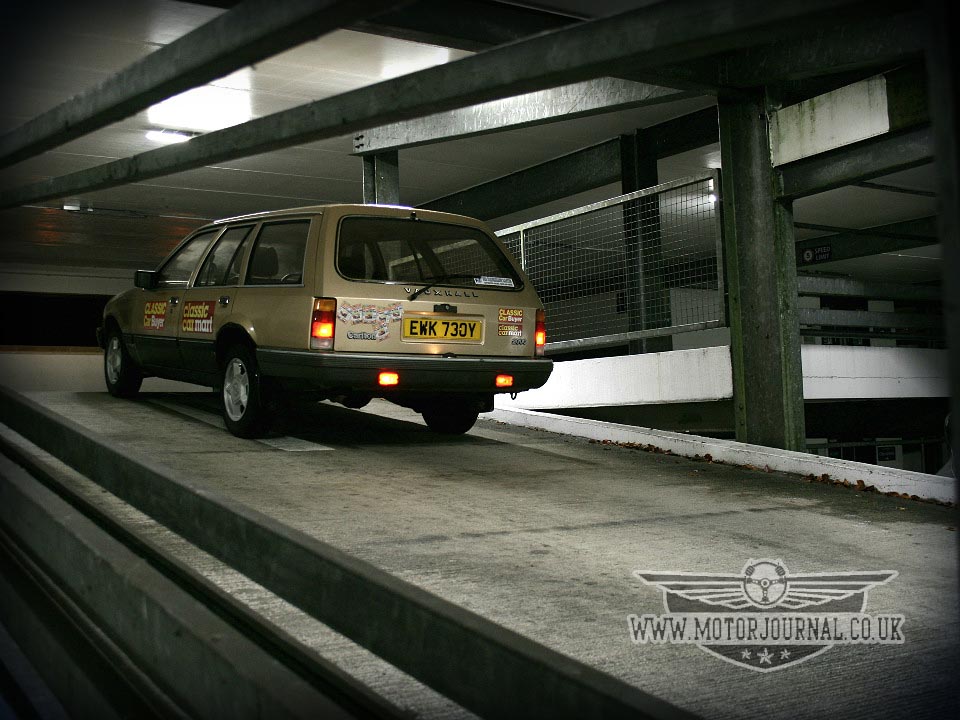 I'm not sure where I'm going with this yet. It's funny, I've been thinking about having a mk1 Carlton estate for so long now, I had all these plans for it, but now, sitting here looking at it, I'm not sure what I want to do! After spending over an hour in the car park looking at it, and thinking that it's such a nice looking machine (Its an eye of the beer holder thing!) I'm pretty sure they're the wheels I'm going to roll on, and I was pretty sure I needed to get the stickers off first. So as I had time on my hands I thought that I'd try to peel them off. To my pleasant surprise they peeled off very easily, and after another hour or so the Carlton was sticker free! However, some of the stickers have left a sticky residue, and some took the lacqueroff with them, and some have taken the colour off too. But thats ok, because it's going to get painted anyway. 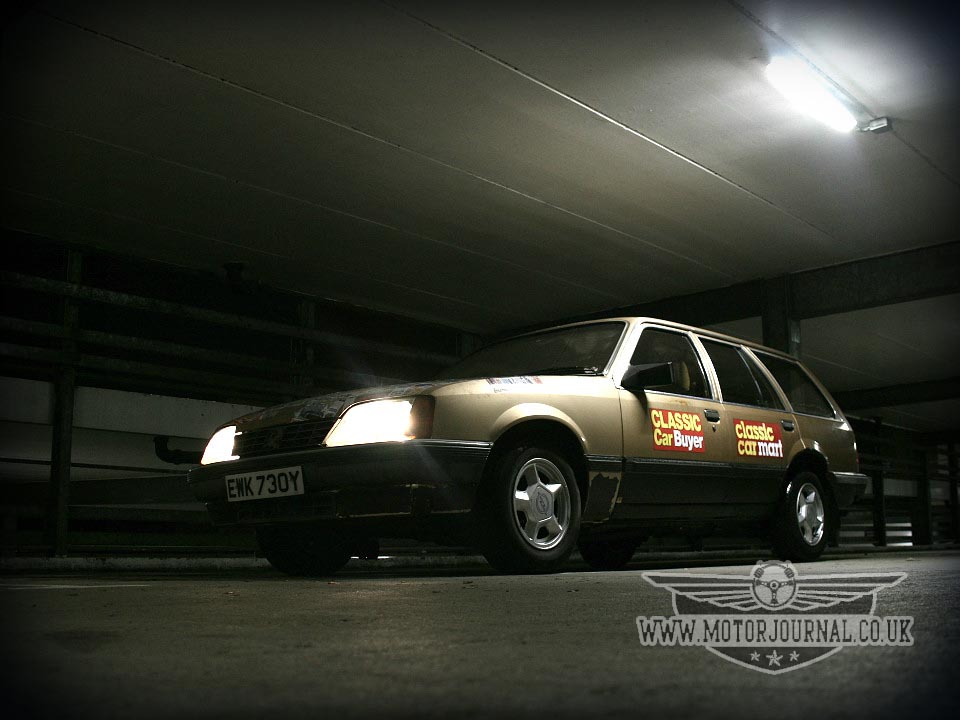 My feeling was that the bonnet was probably the rustiest part of all, infact I thought the stickers were probably holding the bonnet together! But they wern't, although it is fair to say that the bonnet does have rust issues, it's nowhere near as bad as I thought it was going to be! So after my de-stickerisation I thought I'd take it out for a bit of a run, so without further ado here's obligatory first fill up photo:- 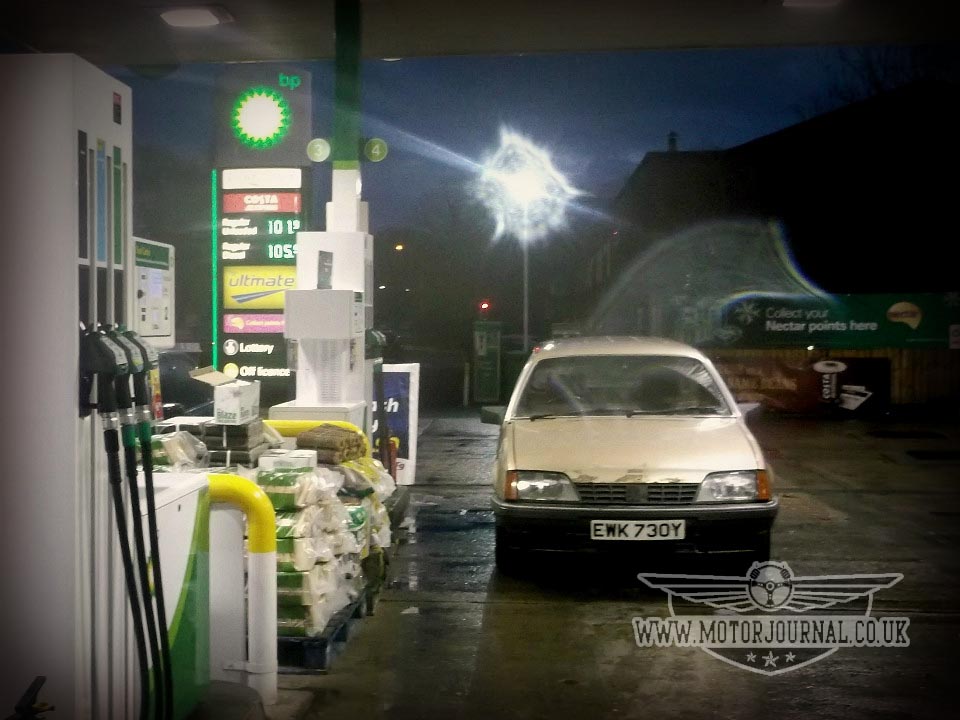 Good news, it was getting dark, chucking it down with rain, and blowing a gale, just the type of weather you want when your taking your new 30 odd year old car out for a bit of a reliability run. Never mind, get yer motor runnin... 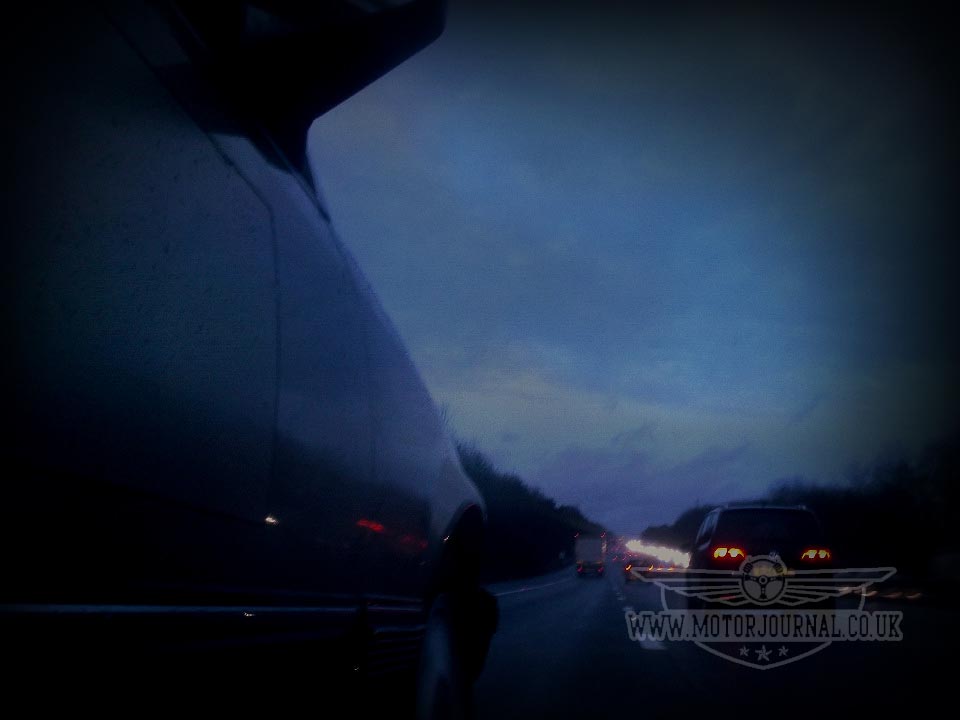 Head out on the highway, looking' for adventure, and whatever comes our way. I figured that it was probably going to be ok, but you just never know. I decided to trundle off down the M3 at about 60mph to just ease myself into the drive. Almost immediately I find that there's a problem... The stereo is going to need replacing! So are the speakers, and it probably wouldn't hurt to add a couple more speakers to the interior while I'm at it. I'm a bit torn over this as to what I should do, I've got a good CD player sitting in my shed which would fit the hole, and do the job of providing tunes while I cruise very nicely. But, it wouldn't really fit with the interior of the car, it would probably look too modern, and wouldn't suit it at all. I've no idea why this is worrying me, it never bothered me before but there you go! My other option is that I've found a rather nice looking modern stereo which takes flash drives etc, but it looks like a stereo from the early eighties, so it would suit the interior better! Why am I even thinking about this? Anyway with the stereo turned off as there's only so much snap, crackle, and pop I can listen to without a bowl in one hand and a spoon in my other, I settle down to tune into the noises the car makes. You know what, it doesn't really make any! I mean sure, the engine whirrs away under the bonnet, but I've got no suspension clunks, no brake judder, no transmission, or final drive noise, nothing... Almost nothing! If I was going to be picky, there is the tiniest hint of thrust bearing whine, and I think there may be a bit of air trapped in the coolant system, but thats it... Not too shabby!

Anyway I continued along the M3, and on to the M27 where I drove for about 30 odd miles, my confidence levels now rising I decided to head cross country for the remaining 30 odd miles to home, again this it managed without a hitch. But driving along the country roads familiarity kicked in, as did a very strong sense of déjà vu. Now for me, I get déjà vu a lot but this time it was a lot more intense than usual. I suddenly felt like I was 19 years old again, driving the Carlton that I had learned to drive in, all that was missing was a bit of Blondie blaring out of the stereo, and a bit of a blondie sitting in the passenger seat! It made me realise what a great time I'd had when I was younger, I had nothing, and having nothing meant I had nothing to worry about. I was footloose and fancy free, I was having a good time, a damn good time! I was having fun and makin some noise... Damn, I was out of control... It was good! But sitting there thinking about it, I wouldn't swap the life I had back then for the life I have now... I'm still having fun, it's just a bit different now! Anyway it got me to thinking, the car I learned to drive in was my aunties 1980 Vauxhall Carlton automatic, registration number PLD 813W, a car that I've been searching for for years... Damn I liked that car. I should've bought it when my Aunty sold it, but I didn't have enough money to buy it, let alone insure the damn thing! I don't know what it had that made that car feel special to me, but it had something, and that something never left the back of my mind... 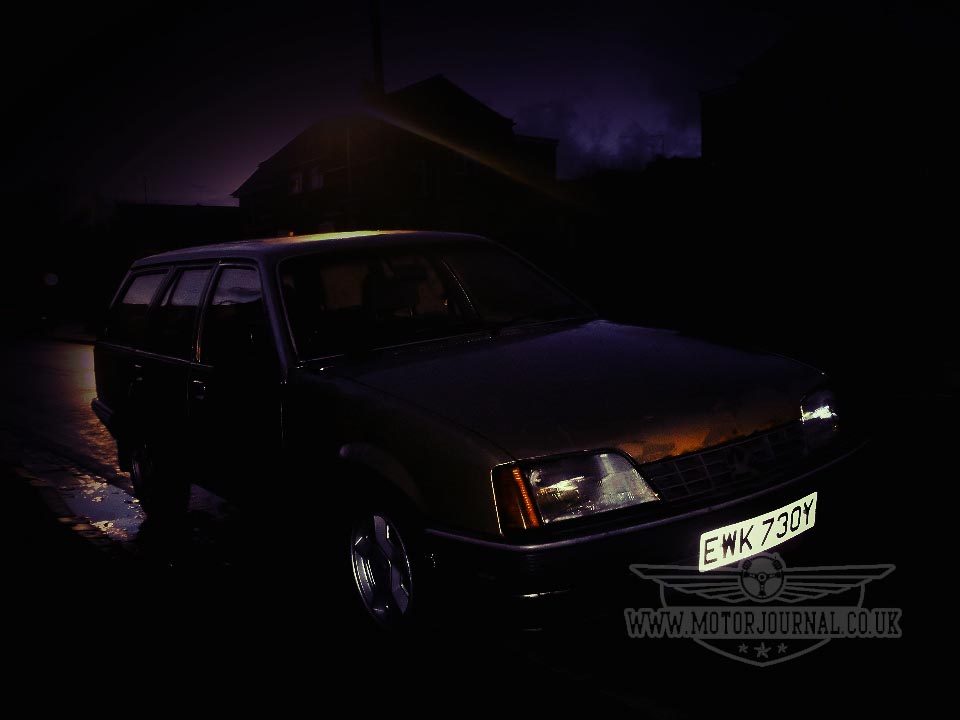 As I arrived back at BelongaClint after my little reliability run I realised that this one has that something too! My feeling is that this won't be leaving the stable for a good long time!