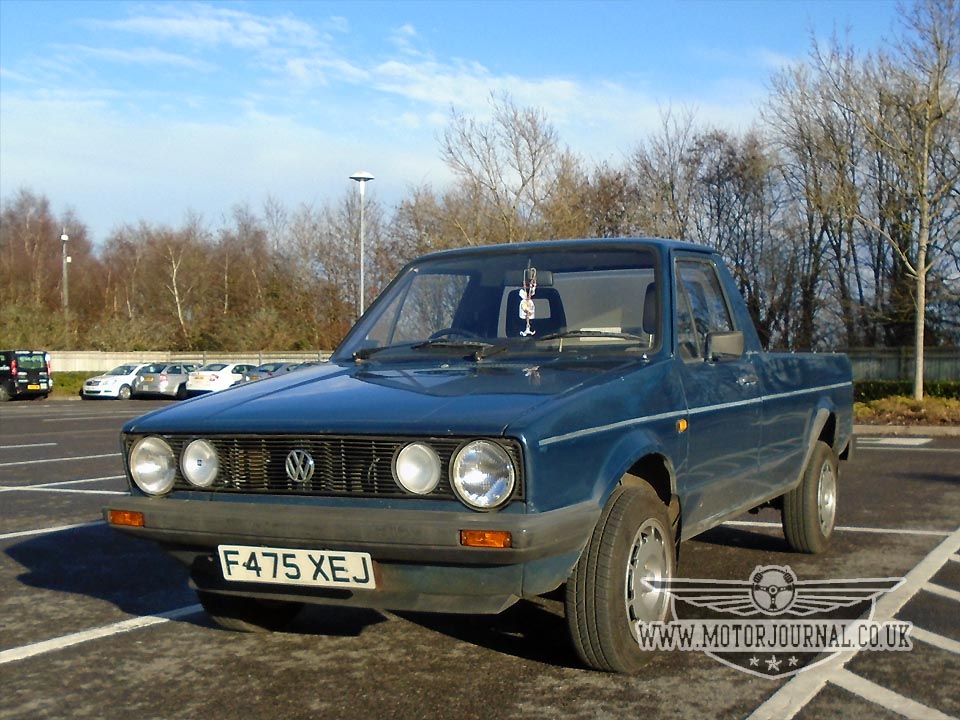 Utes, I love 'em! I realise that for the most part people probably refer to them as pick ups, but in my humble opinion utes and pick-ups are different, let me explain... A ute is an abbreviation for coupé utility and is a term used originally to describe a two-wheel-drive, car based vehicle with a cargo tray in the rear integrated with the passenger body. Whereas a pickup truck tends to be a light duty truck with an enclosed cab and an open cargo area with low sides and tailgate which is not integrated with the passenger body. But whatever you'd like to call it, let me introduce my latest ute, a 1989 Volkswagen Caddy. 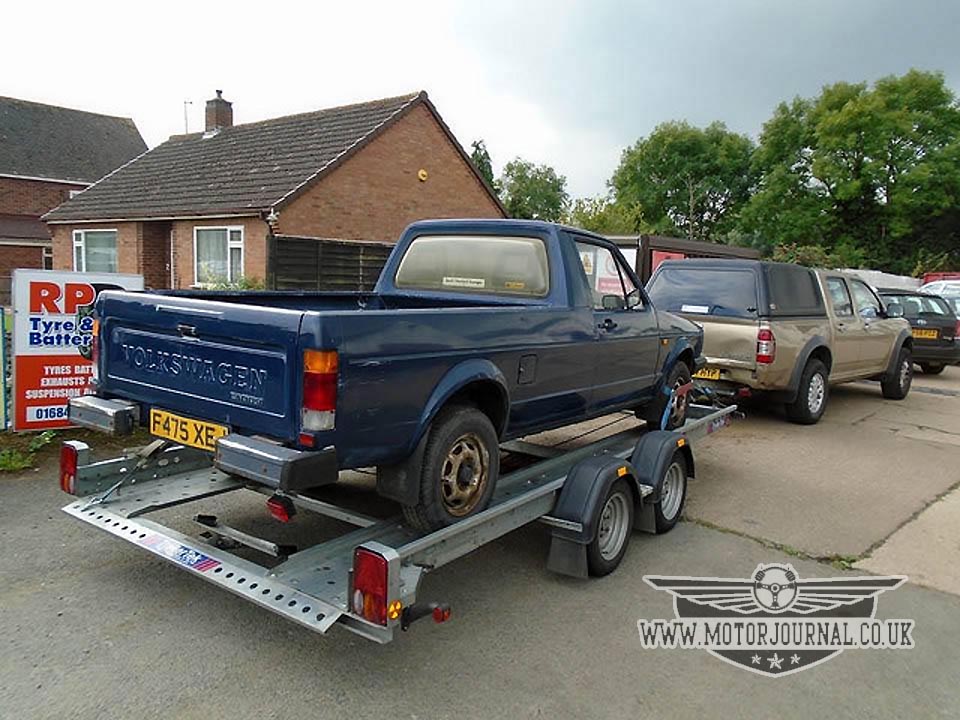 I've wanted one of these for, well, since they were new. I remember going on holiday to Austria in the back of my folks Cortina in the early eighties and seeing these on the roads of Germany and thinking, I've got to get one! Well, about a year or so ago my friend and I were talking about them, and it sort of re-kindled my interest in them, so I quietly started my hunt. I've got to say, I looked at dozens of Caddys, described as in 'great condition' and 'MINT' only to discover they were full of tin worm, and I've already got cars like that! Anyway, eventually this one showed up, it has had two previous owners, and now me! It is not immaculate or anything like that, it has been used, but not abused... It has patina! I just had no idea how much patina costs these days! But the thing is, they're never going to get any cheaper, so I took a deep breath, and emptied my bank account! 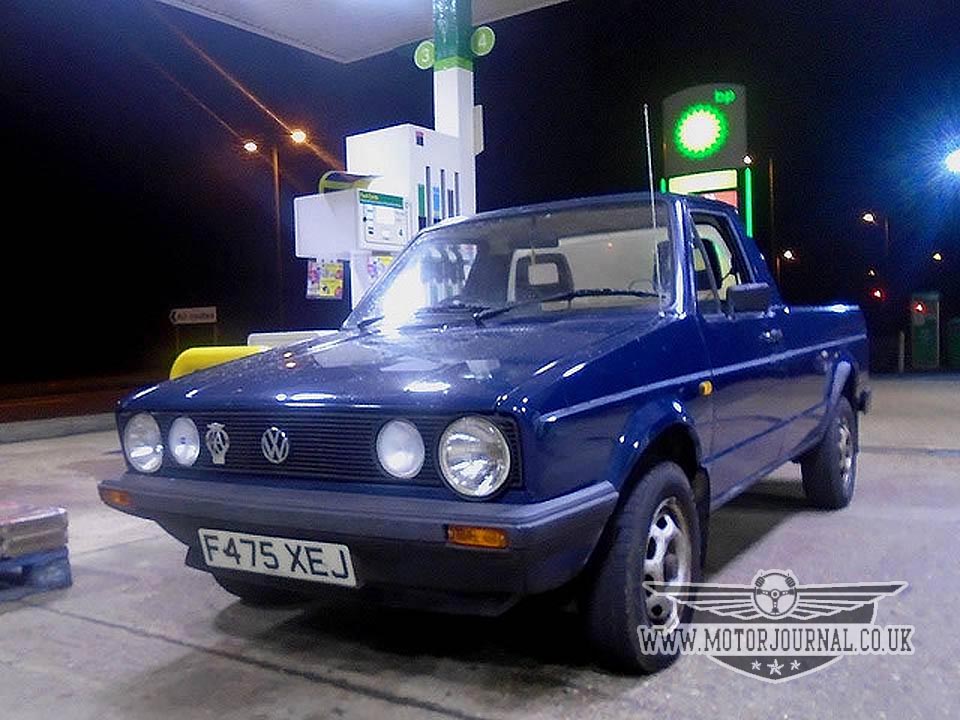 Awesome first fill shot! the thing that worries me most about this little Caddy is this. My first foray into Hitler youth worker car ownership was the previously mentioned 1970's Beetle Convertible, which I loved, it was just brilliant. I followed that up with a mk3 Golf Convertible, which I found to be extremely dull, and boring to both drive and own. Then there was a Scirocco, which promised so much, but to be honest was a bit of a disappointment. I am quite concerned that the Caddy will not live up to its expectations either. However I have been driving it around a lot lately, and it gets to do the school run every day now that I'm only taking one of my little monsters to school in the morning as the eldest monster is now at secondary school, and so it's ideal, and to be honest, this was one of the reasons for buying it! I am happy to say that I unlike my previous Golf, and Scirocco experiences really quite like the Caddy. Actually, I like it a lot! It is very utilitarian, but it's light, nimble, and pretty responsive, it's good fun to drive, and it ticks VW Caddy off the list, as it's been on the list since they were new! I've carried an image around in my head since the eighties of how my Caddy should look, and so I have started to play with it a little, and have treated it to a set of wheels! 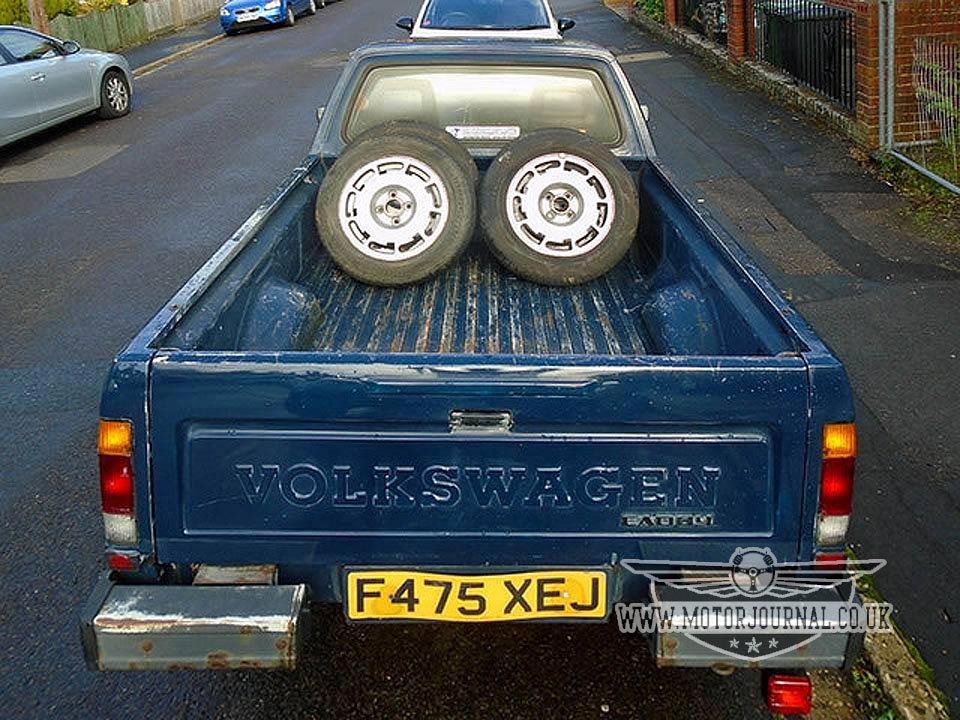 Ooh yeah, Pirelli P-slots! If I'm honest this is a wheel that I have never liked, however I have always thought that if I managed to get hold of a Caddy, then it would have to have P-slots on it! The wheels themselves are in quite good shape for their age, and match the patina of the Caddy very well, therefore I shall not be painting them or restoring them in any way, as I think as they look right now, they look like they've always been on it. The tyres however... 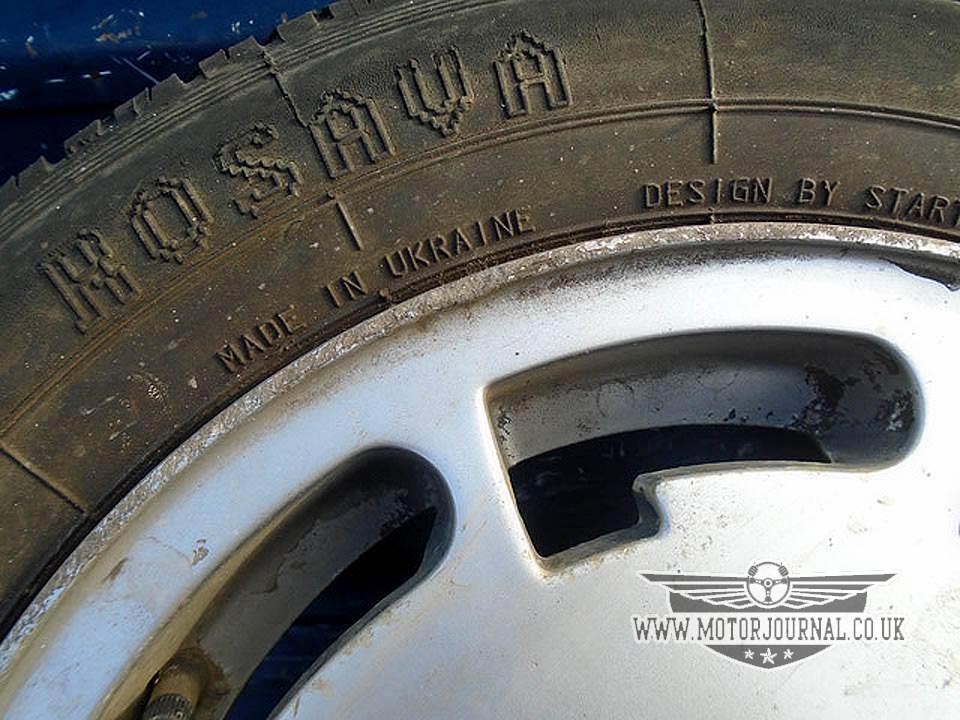 Leave a lot to be desired, ROSAVA Tyres, Made in the Ukraine. Now I realise that "Made in the Ukraine" is the new byword for quality tyres these days, but I think I might just source something else! I've got a set of nearly new tyres that I took off my Rover estate that I had last year so those will replace the ROSAVA tyres. Of course they're not Pirelli tyres either, which is a shame, but nevermind they're not made in the Ukraine! 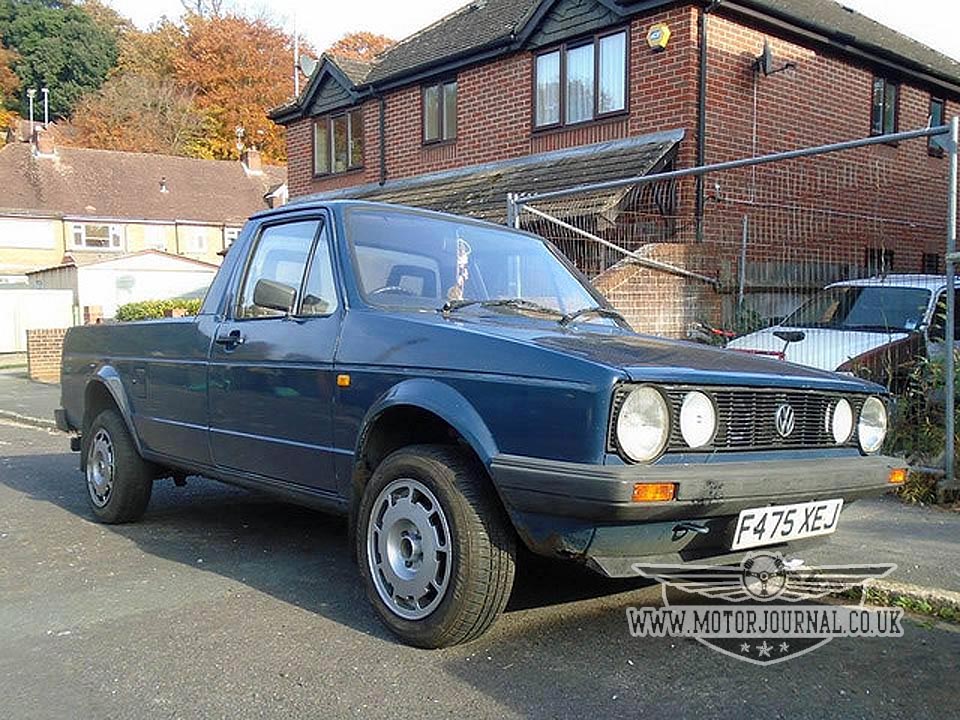 As I expected, I think the Pirelli wheels look pretty damn cool on the Caddy! To my way of thinking this looks good just as it is, however all of my friends tell me that I need to lower it. I must admit it does ride a bit high, but I am reluctant to lower it because it will lose its originality if I lower it, and I think it'll spoil it a bit. Other items I felt my Caddy needed to match the image of my perfect Caddy that I've carried around in my head since the 1980's included a small chin spoiler, an eyebrow over the top of the lights and grille, and a graphic of some kind. Nothing too leary, just a stripe or something. Well as luck would have it I was wondering around a car boot sale, and a fella there was selling some graphics for cars, and they were cheap, and better than that, he had a stripe that I thought would really suit the look of the Caddy, so I bought it! This meant however that further money would need to be spent on an eyebrow to finish off the look that was in my mind! Onto ebay, and before too long an eyebrow was located, and dispatched to BelongaClint. 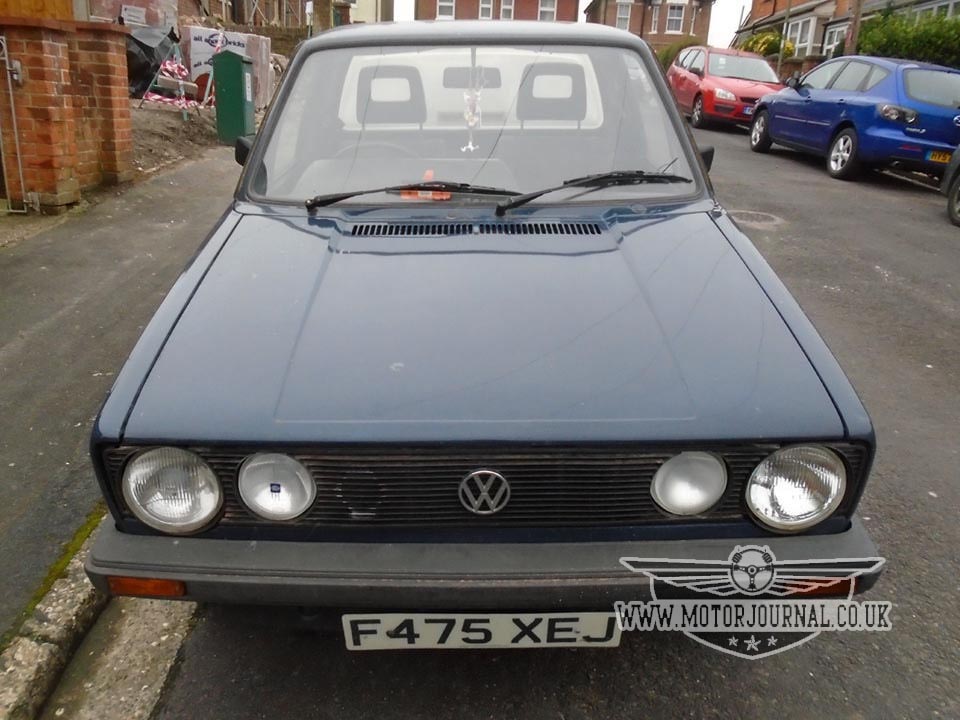 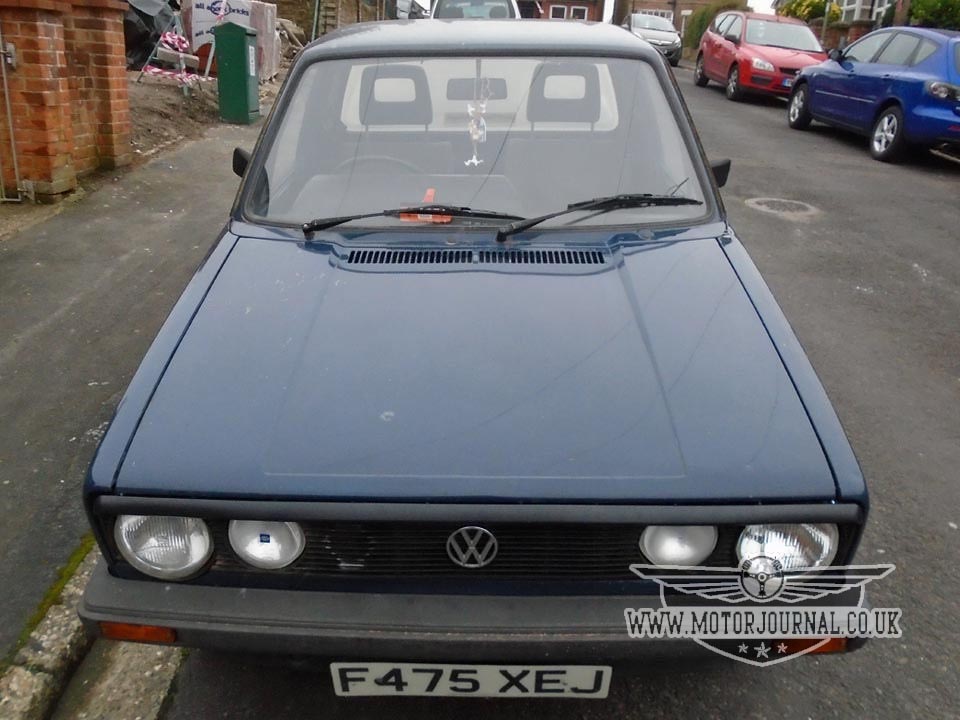 Now with added eyebrowness! Of course, my Dad wasn't too impressed. He took one look at it and said he didn't like that. I said why not? He said, what do you need it for, what good does it do? I said it was for styling! He said that it was pointless... I'm sure my Dad's Armish, he likes base model stuff with no frills... I need to have the frills! So with the successful application of the eyebrow the next step was to apply my newly aquired graphic. 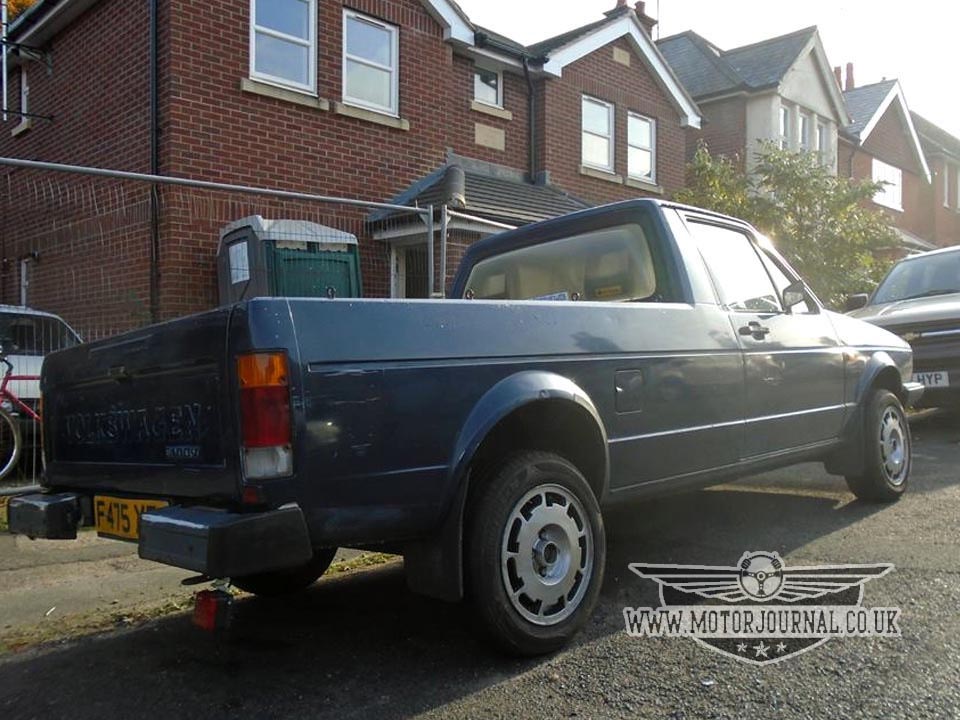 Now, it's just a simple stripe, but I've had varied succsess applying graphics to my car in the past. It seems to go like this. If it's on the work van, or someone elses car it goes quite well. If it's on my car it usually goes in the bin after I've messed it up! But after watching David Freiburger several times on YouTube the littlest monster and I decided that we could do it! We picked a day that was warm(ish), dry, and most importantly, not windy! Cleaned the Caddy with washing up liquid to remove any dirt, and polish that may have been on the bodywork. Then after it had dried gave it a quick wipe down with Meths. 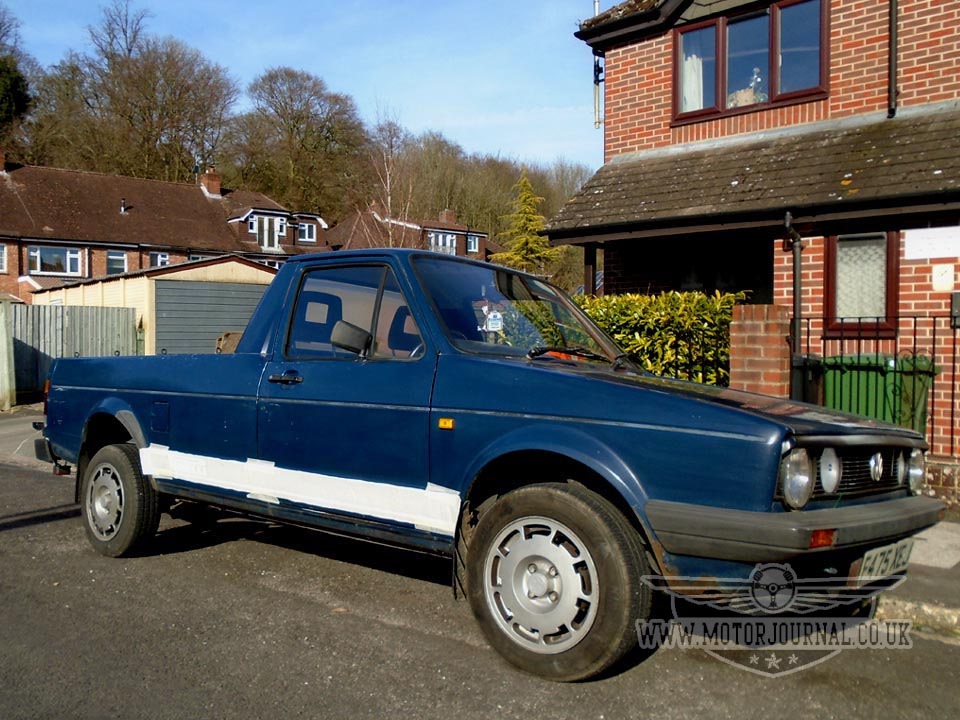 Then we used masking tape to hold the graphic on it's backing paper in position. I wasn't going to use the above image, but i just wanted to show you something. Y'see that hole down at the bottom of the front wing? Thats the only rust on the whole car! Yep, took me a long time to find this Caddy, and I think I found the best one! Anyway... 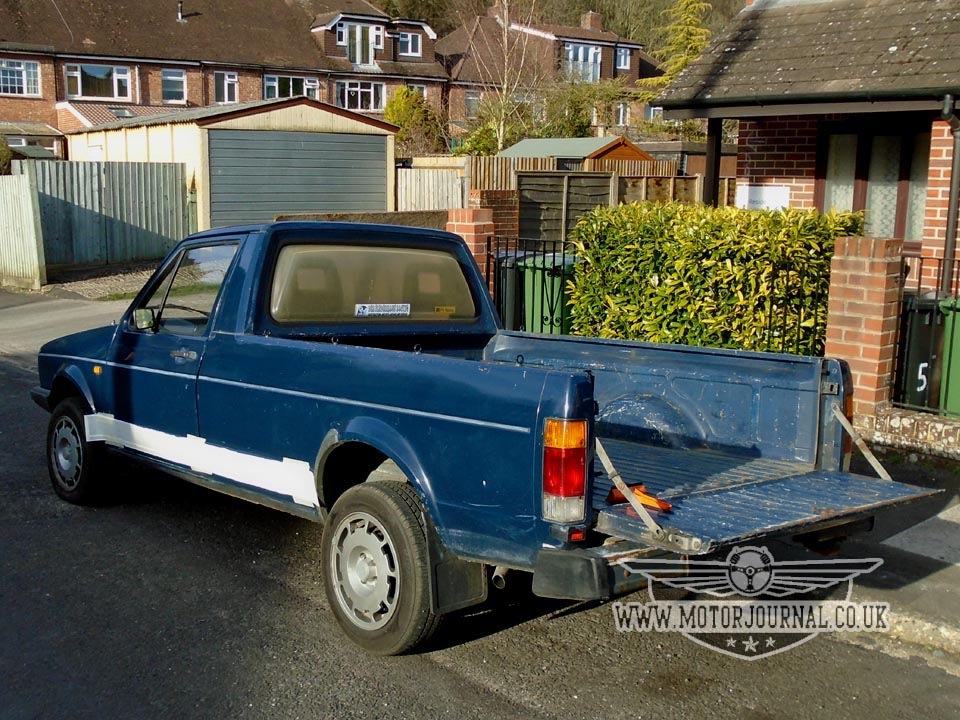 Turned the Caddy around and did the same on t'other side. Then we peeled the front bit of the graphic away from the body, littlest monster wetted down the body with a water atomiser, and as she sprayed the back of the graphic I carefully peeled it off the backing paper, and stuck it to the body. I then rubbed it down by hand, and we worked our way along the graphic until we had reached the end. I then took a squeegee, and pressed the graphic on firmly. Finally we removed the backing paper, pressed out the few remaining water bubbles. Cut the graphic where the door gaps are, and then... 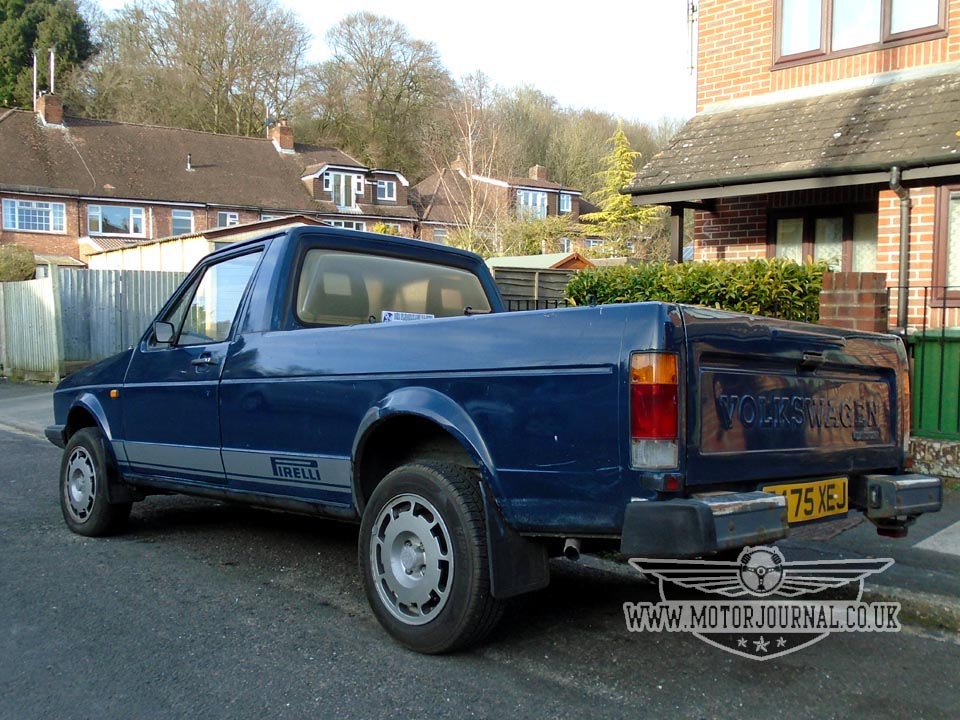 Stood back to admire our handywork! I'm pretty pleased with how it's turned out if I'm honest. This is pretty much how I planned mine to look more than three decades ago when I was a child. Finding that stripe was a nice surprise, and I think it looks perfect on the Caddy with those wheels. 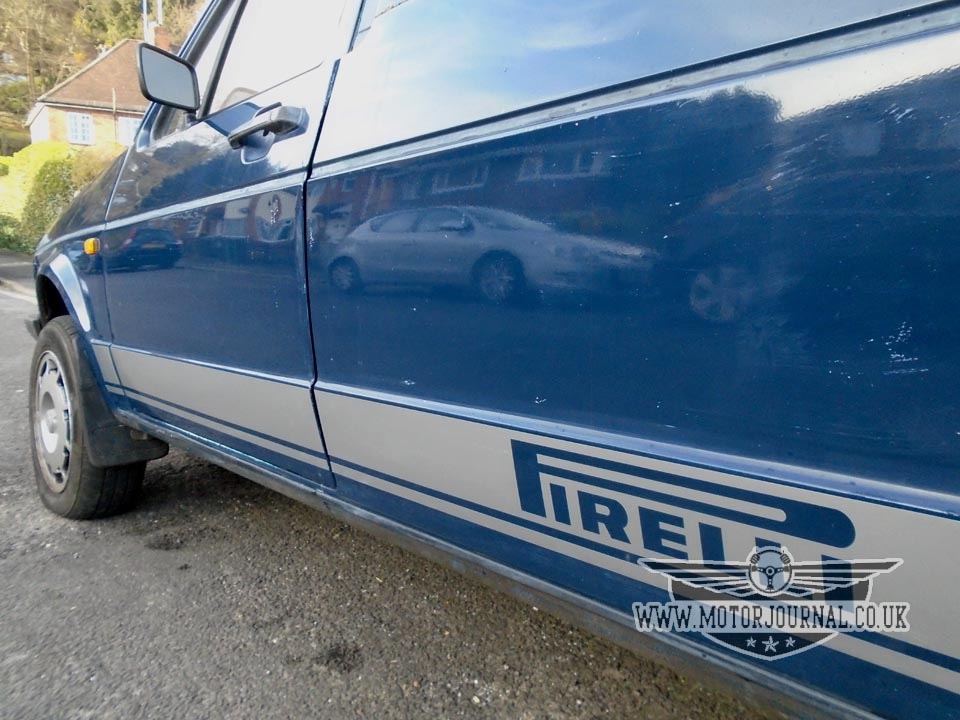