July 19, 2017
For me this is where me writing about my cars on the internet began, on January 25, 2015 at 11:15pm on the Retro Rides forum with my first car thread about 1985 Talbot Alpine. So it seems only fitting that for my second post into my blog I  really should bring it up, and start here! So here is the first photo I ever took of it, In time no doubt this will become known as 'the famous first fill shot! ' Well, that is if I manage to keep my blog going for long enough! 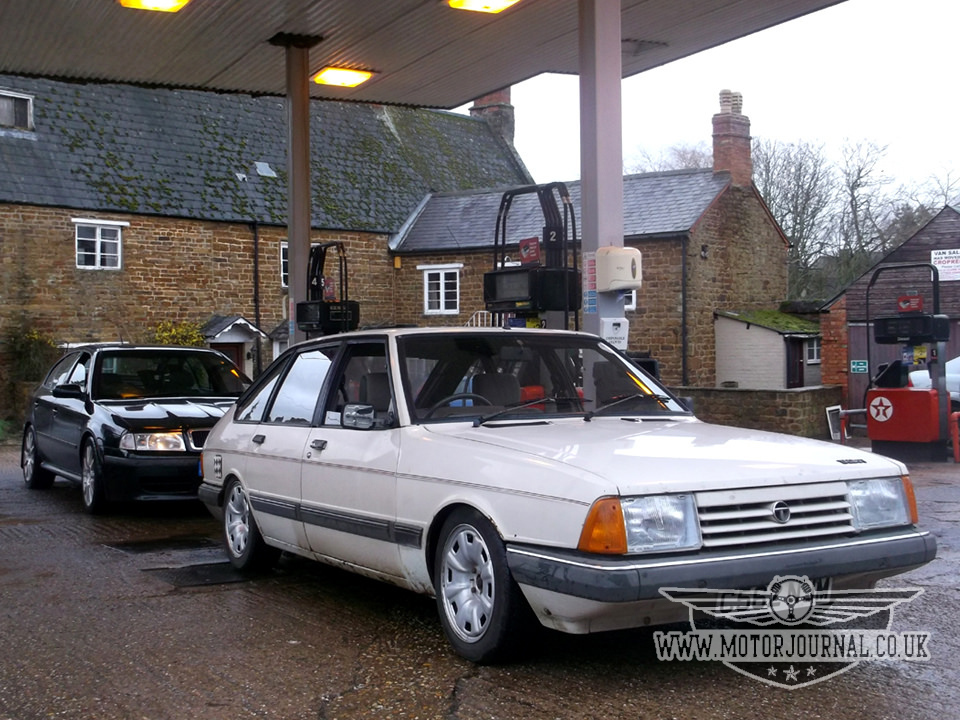 By the time the first fill shot photo was taken I had been the proud owner of it for all of about ten minutes but to be honest, I felt like I'd never been out of one! It had been nearly 20 years since I last set foot in an Alpine, so what on Earth was I doing buying this thing of beauty? In a nutshell, my kids made me do it, and I am very easily lead! The thing was they were looking through my old photos of my old cars and asking me what this one, and what that one was like. I have had some cool cars in my time, and to be honest, the Alpine was probably one of the least cool. However before long they came across this photo. 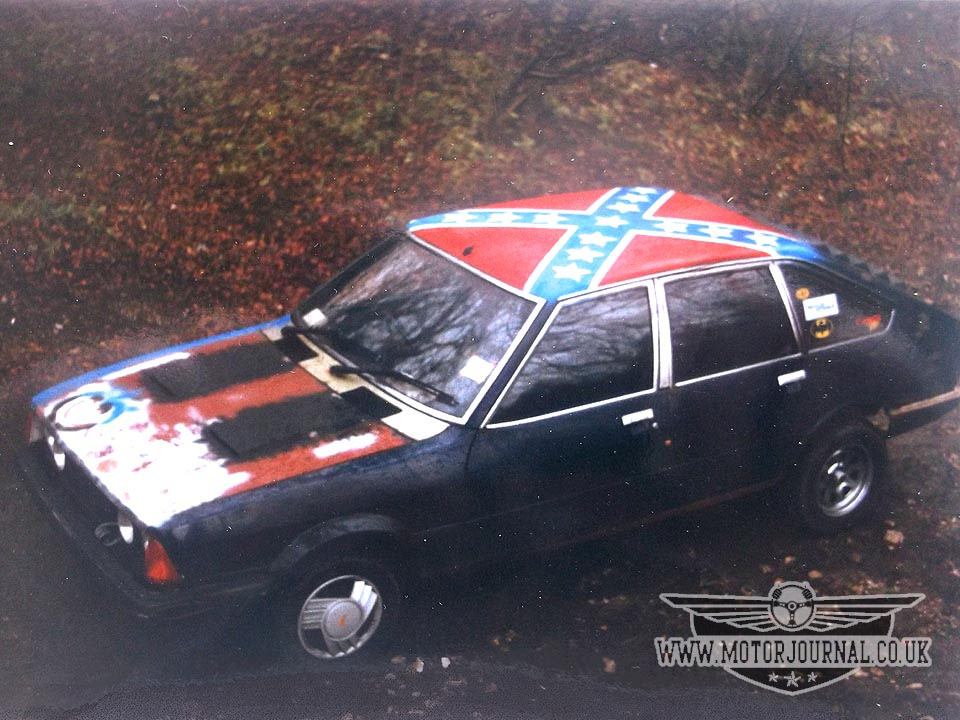 Here it is, my original Chrysler Alpine, the car that taught me so much about driving, car repairs, girls... Everything! I owe it so much. Now before I go on, you need to remember that this was the very late eighties/early nineties, it had by the time of this photo been in quite a hefty front end bump with a Police Volvo 240, and I was into The Dukes Of Hazzard! So upon discovering this photo my two little ladies asked quite a lot of questions about it, and to be fair to them, they seemed really quite interested in it. Listening to my girls talking about it got me thinking about it, not that the old car really ever leaves my mind being my first car, and even now I can still hear that old engine rattling away like a bag of rusty spanners as I drive along in my mind. Even though my first one was only ten years old at the time of my purchase it was still quite a modern for its time, a front-wheel drive hatchback, and along with the Volkswagen Passat was one of the first such cars in that class. In 1976 it even became European Car of the Year. Codenamed the C6 it had been in development since 1972 , and  was styled in the United Kingdom by Roy Axe and his team at Whitley and built by Simca at Poissy in France. The model was sold under a variety of names, including Simca 1308 and 1309 in mainland Europe, Chrysler Alpine in the UK, and after PSA Peugeot Citroën purchased the failing Chrysler Europe (which had been Rootes and Simca) from the troubled U.S. parent firm for a nominal $1.00, It was re-branded once again as the Talbot Alpine. Of course, even though this was my first ever car I'd driven other cars up until I took ownership of my 1979 Chrysler Alpine, and once I had my own licence in my hand and I could drive alone, then I drove this Alpine. Over the last three decades I have had the pleasure of owning half a dozen or so Alpines, in every guise from my first one above, a Chrysler badged Alpine, to a Simca 1308, and eventually on to the newer models which were badged as Talbot Alpines.

Anyway, after a lengthy conversation about my original Chrysler Alpine with my two little Monsters who seemed to be quite interested in it I said to them, OK, the next one that pops up for sale, we would buy it, and then they could experience it for themselves first hand. I jumped on fleabay, and within a couple of months I had bought this one. Admittedly not quite as colourful as my first, but I figured that it should drive the same. So then, here we are with this one a 1985 Talbot Alpine, magnificently painted in possibly the most boring colour ever to be put on a car... Hearing Aid Beige! 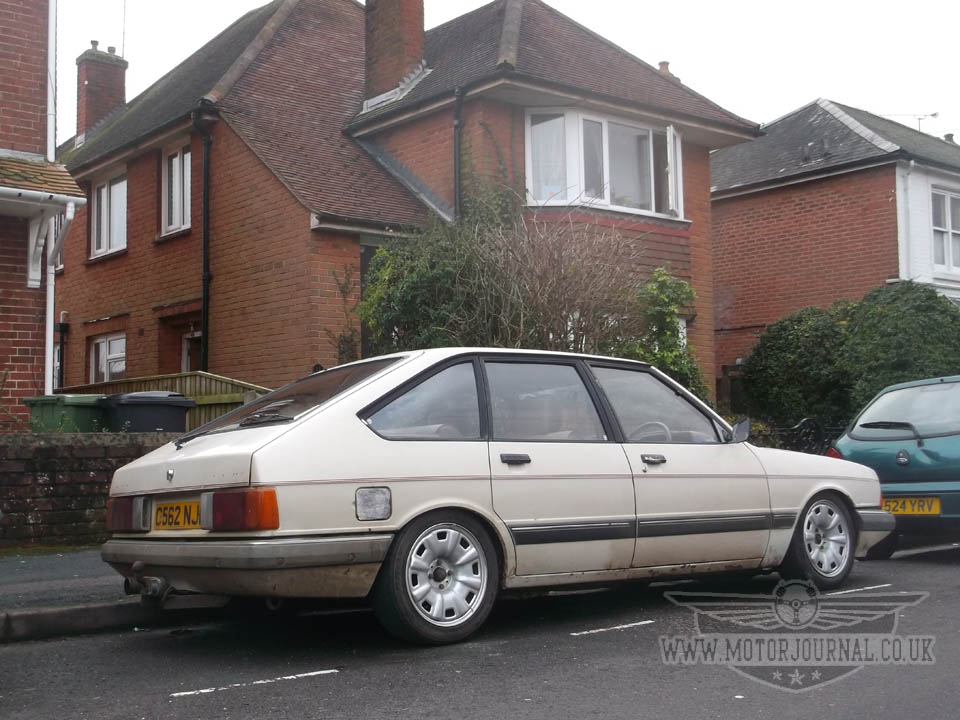 The following Saturday after the auction had been won my friend and I drove the 180+ miles to collect my new toy. The journey home was an interesting one, I've had some interesting, and pretty cool stuff in my time, but on the way home I noticed quite a few people taking photos of it as they passed me in their cars! Anyway, once home I immediately set about impressing my wife with my latest ride! She was VERY impressed, and soon insisted that I take her out to dinner as I oviously had too much spare cash! (Yeah, like that could ever happen!) So off out to dinner we went! Anyhoo, as luck would have it, Mrs Clint liked it, and she even drove and enjoyed it! My two little Monsters thought it was great too, so everyone was happy! Infact, the wife was so impressed she bought me a couple of stickers! I'll be honest, I'm not a sticker fan, but I kinda like these, and how they look on the car! 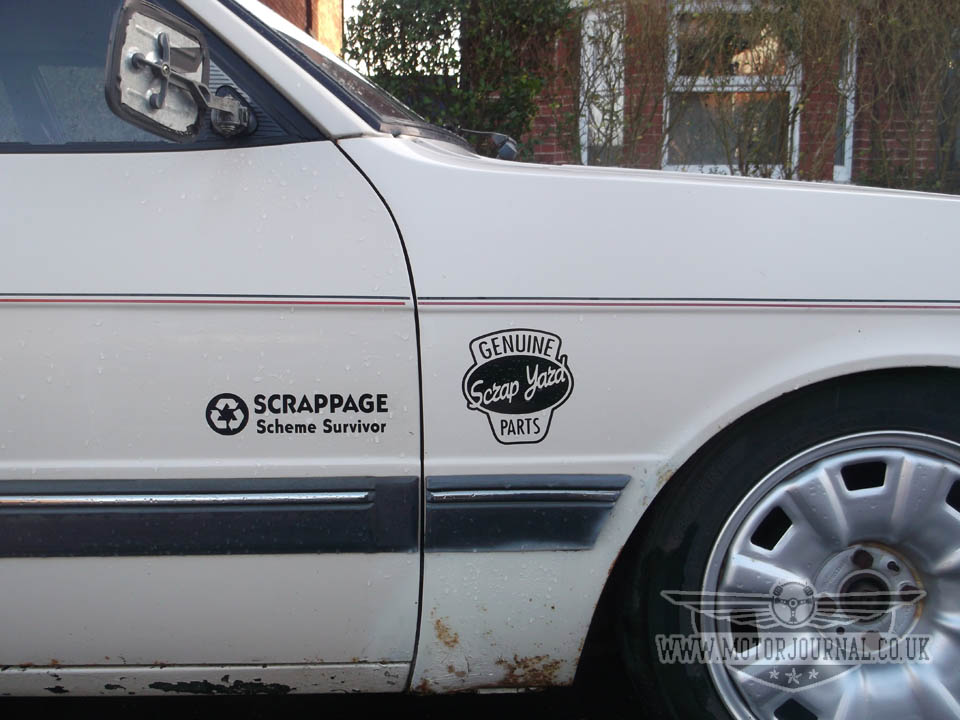 After maybe just a week of ownership I had managed to put a hole in the side wall of one of the rear tyres, so a quick browse of fleabay for a set of 15" Fiat wheels turned up a set of Fiat Punto alloys with nearly new tyres on ebay for just £40, of course they were nowhere close, so I then had a 400 mile round trip to collect them and bring them home. Still, it gave me a chance to get out there and drive the Talbot, and it was my first long distance drive in it, it was great, although it was very cold in the cockpit as it was snowing, and the heater didn't work, and very noisy because, well there's not much sound deadening, and the engine is very noisy! I know that for most people the Barchetta steels are the preferred choice, and to be fair I love the Barchetta steels too, I even still have them although they've been powdercoated white now, and some day they may go back on. 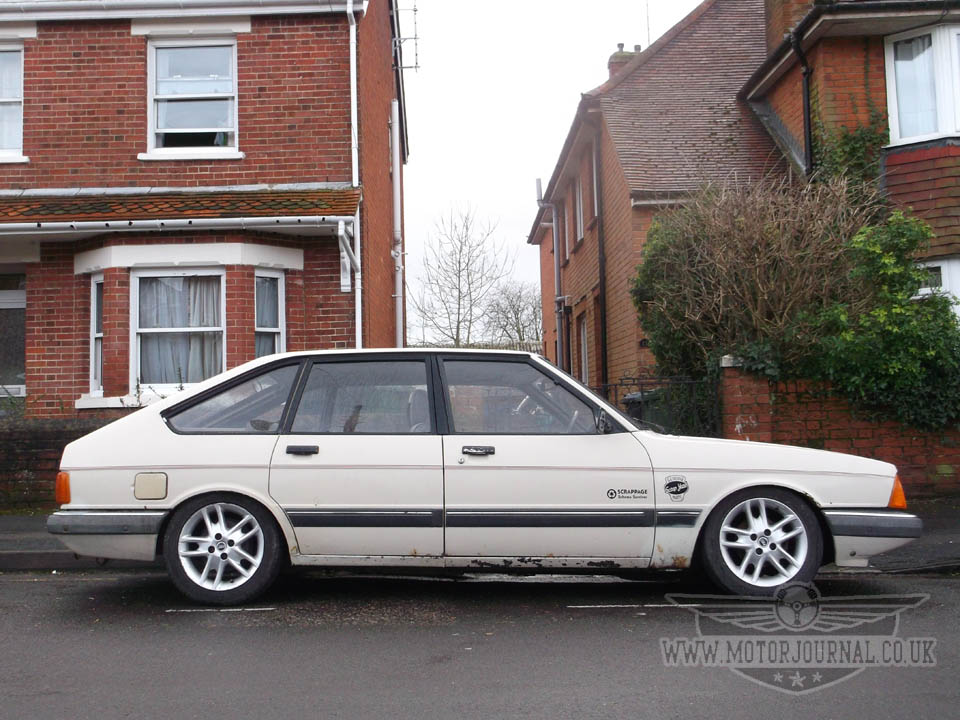 However, as time has gone on, although I like both the Punto alloys, and the Barchetta steels, they are probably not the wheel that I really want to have on it! 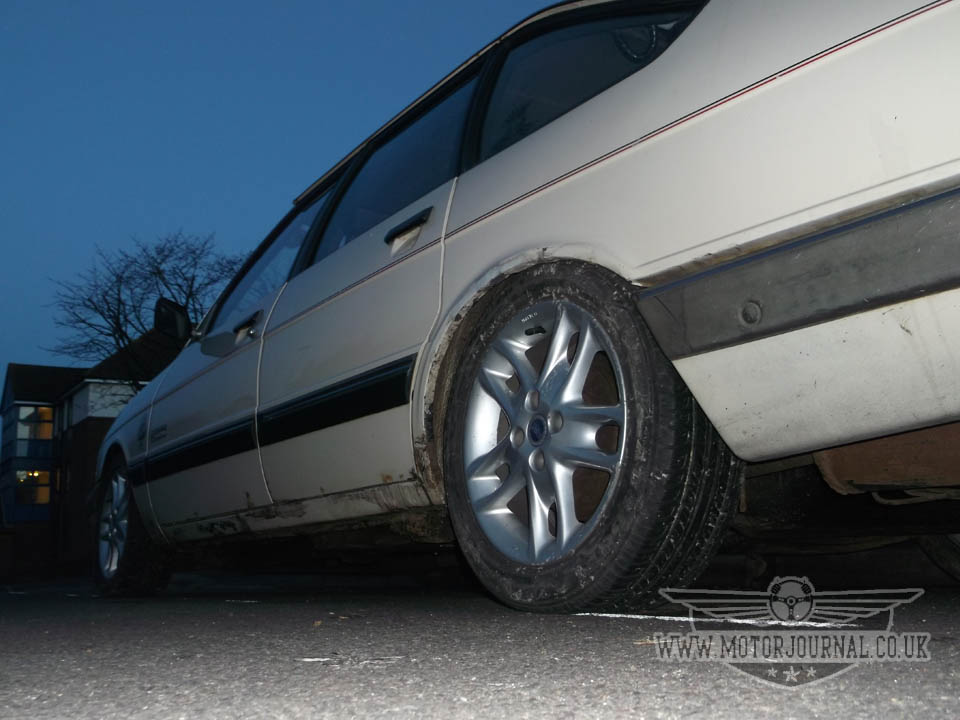 With the exterior fettled just a little with new stickers and wheels I decided that the interior needed to be fettled a little too. So I've changed the gear knob! A big job I know, but the old Talbot one was a bit chewed, and didn't feel good in my hand, plus it looked dreadful! 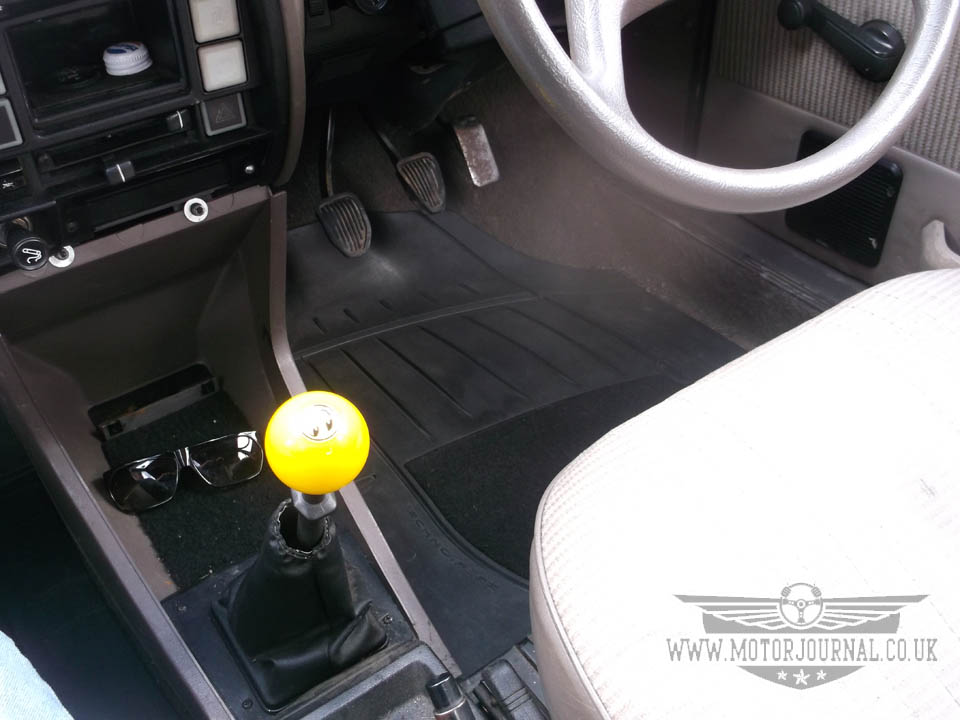 I also fitted some gauges where the radio slot used to be. I always thought that it would look neat with gauges there, and as I didn't have a radio, or even be able to hear it of the din of the engine if there was one, I figured that gauges were probably the way forward! 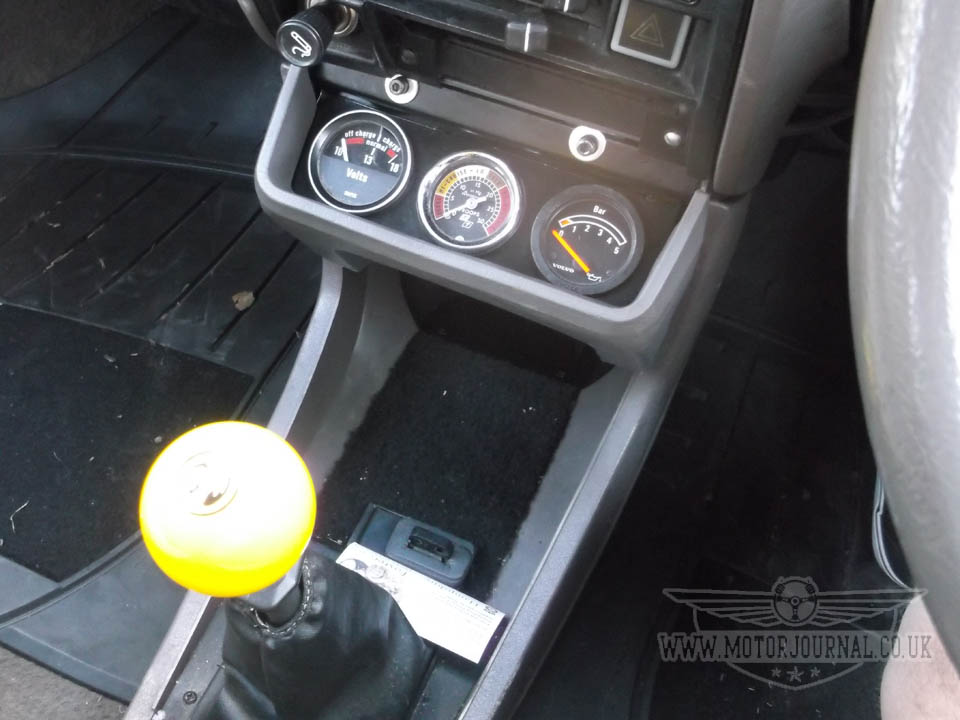 So, where am I going with this car? Well, to be honest I really don't know, part of me wants to fix it up and get it looking really good again! But, I really like that it is a bit scruffy, it's been a long time since I've had a scruffy car because I like my cars to be clean and shiney! So for this one, I think I'm going to fight all my urges, and OCD to have it looking perfect, and drive and enjoy it as it is, picking up the parts as they fall off, and tinkering and fettling as I go!