With the interior done I was riding a bit of a high, I really thought that the end was in sight, and I could almost taste the bugs in my teeth as I drove along the road. To me there looked to be only two hurdles left, wire it, and get it through a MOT. How hard could it be? Well truth be known I really had no idea how to wire it, to me is seemed to be quite a complex task. I looked at copying the wiring diagram from a Ford Cortina as I had the Haynes manual to hand I figured that I'd just follow the diagram in the back of that. But the more I looked at it, the more complex, and hard to follow it appeared. I decided that the way forward might be to just buy a wiring kit. At a show I looked at a guy selling various kits, and once again my feeble little brain couldn't take it all in, and so, I decided to leave it. I spoke to my friendly mechanic about my dilemma, and he thought that I probably could do it without too much trouble, but if I felt that I really couldn't, then his Brother used to be a vehicle electrician, and no doubt he could do it for me. I thought about this for all of about ten seconds before deciding that this was indeed the way forward.

About a week later and I was ready to take my little budget Hot Rod to get it all wired up for me. This un-earthed another problem. 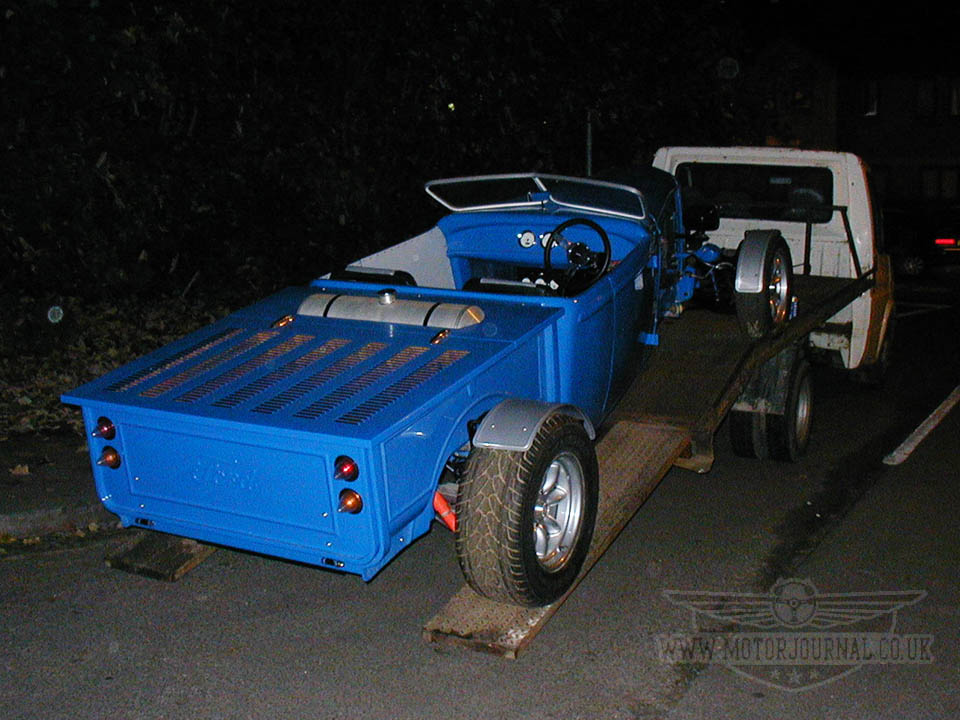 I knew my little Hot Rod was low, but I didn't realise it was too low. It started out quite well, I borrowed a car transporter, set the ramps out, and connected the winch to my Hot Rod. I pressed the button, and pretty soon it was pulling the Hot Rod on to the back of the truck. But pretty quickly it was evident that the hump on the bed of the truck was going to hit the chassis of my Hot Rod. 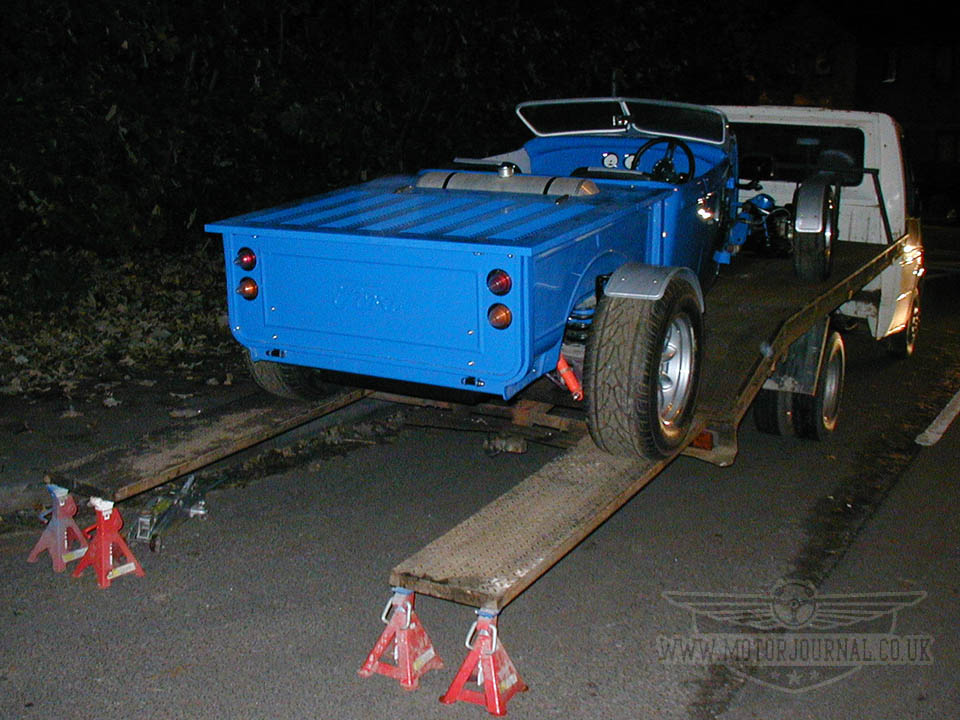 No matter, I thought to myself, I'll just jack up the back of the ramps which will lift the rear tyres of the Hot Rod, and then continue to winch it aboard! It'll be a piece of cake! With the ramps lifted once more it was pretty soon evident that I was still going to be dragging the chassis on the bed of the car transporter. I looked around for another way to haul it aboard! Across the road was a building site, so I wandered over to borrow a couple of concrete blocks. 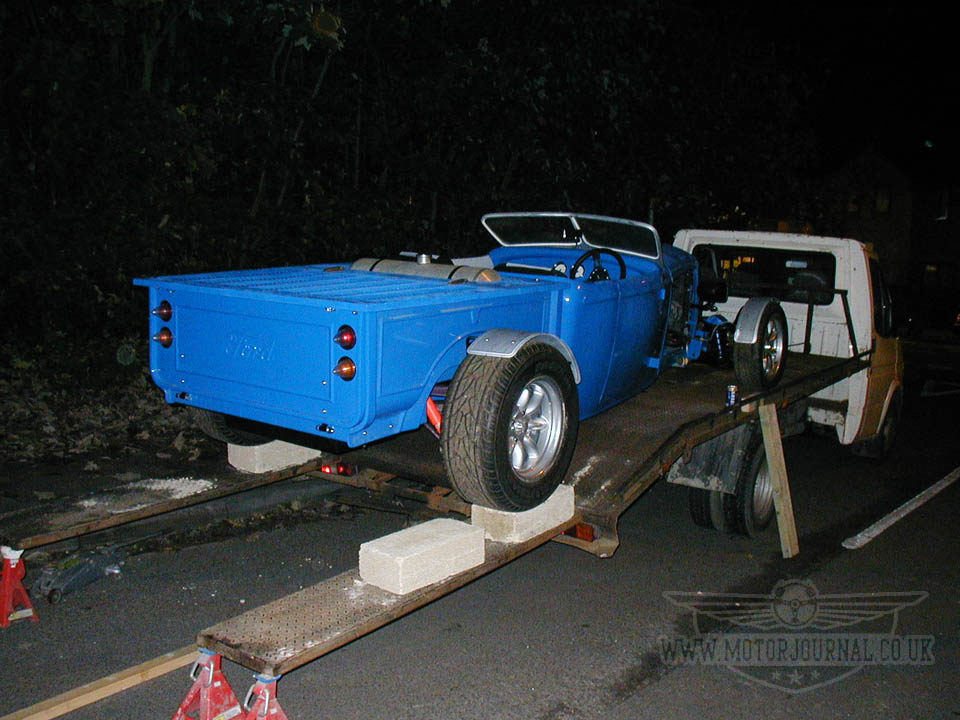 I released the winch a bit and pushed the Hot Rod back to the back of the ramps, then I put the concrete blocks ahead of the rear wheels, and once more started to winch it aboard. It worked, the rear wheels climbed on to the blocks as I winched it, then I just moved the rear blocks forwards once the wheels where on the front blocks. I continued to leap-frog the blocks until the Hot Rod was finally aboard the car transporter. 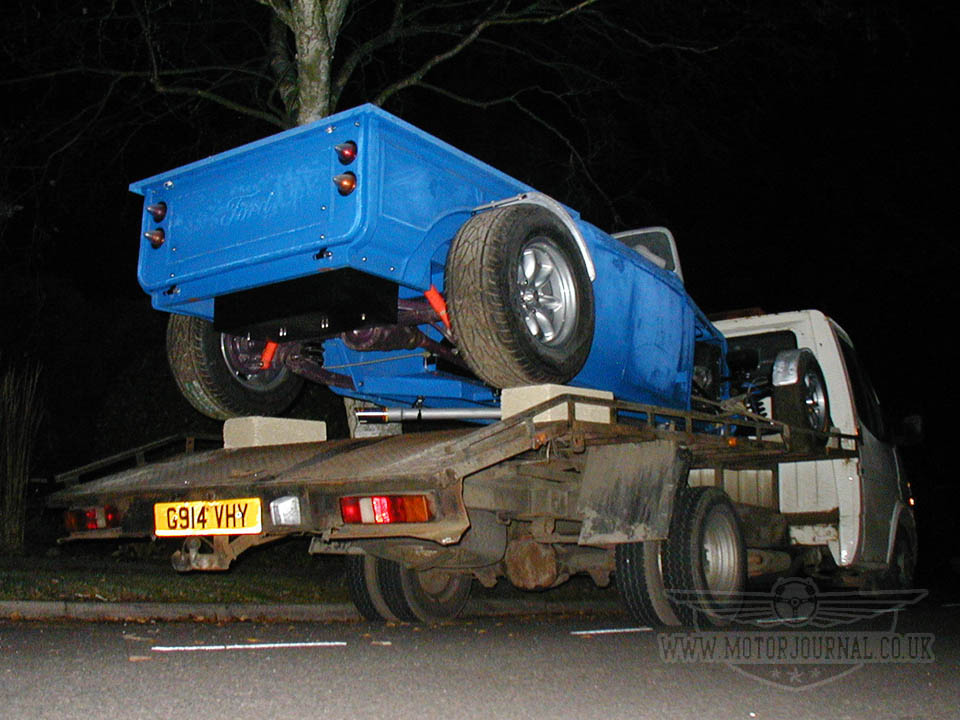 That was a proper faff, and it made me realise that in all honesty, as cool as it looked it was just too damn low! I wished that I had come to that realisation sooner as the following day I would need to do the whole thing in reverse to unload it for wiring. 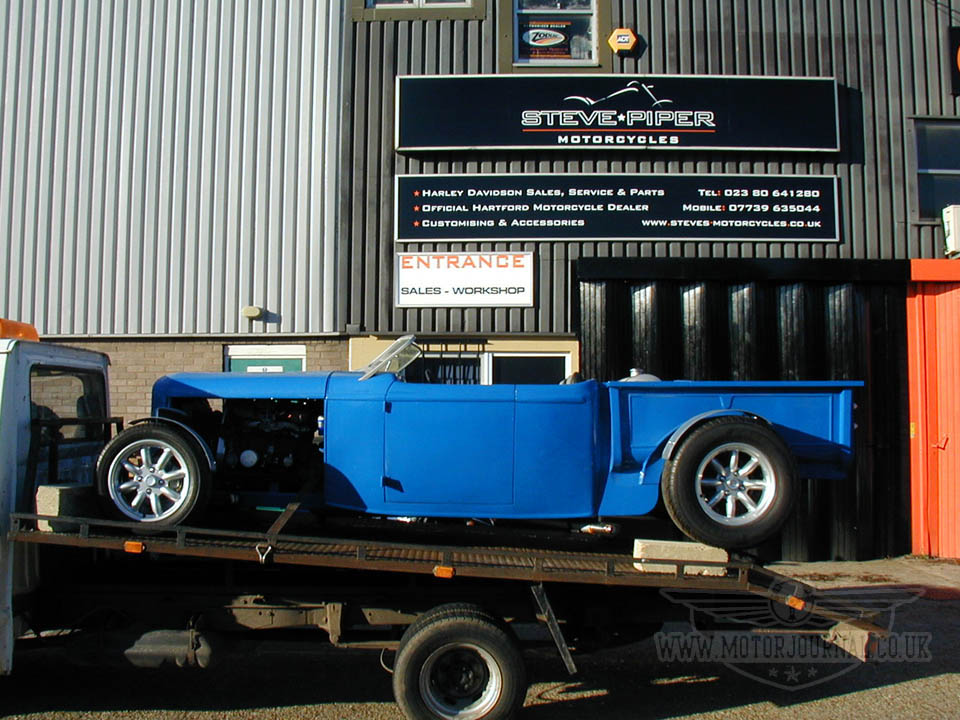 But as luck would have it the following day when I pulled up outside Steve Piper Motorcycles to get it wired I noticed that the next unit was ATS. I went in, and told them about my problem unloading it, and asked them if I could back my transporter up to their ramps so that they could raise their ramps to the same level as the bed so that I could just push it off the truck on to their ramps. 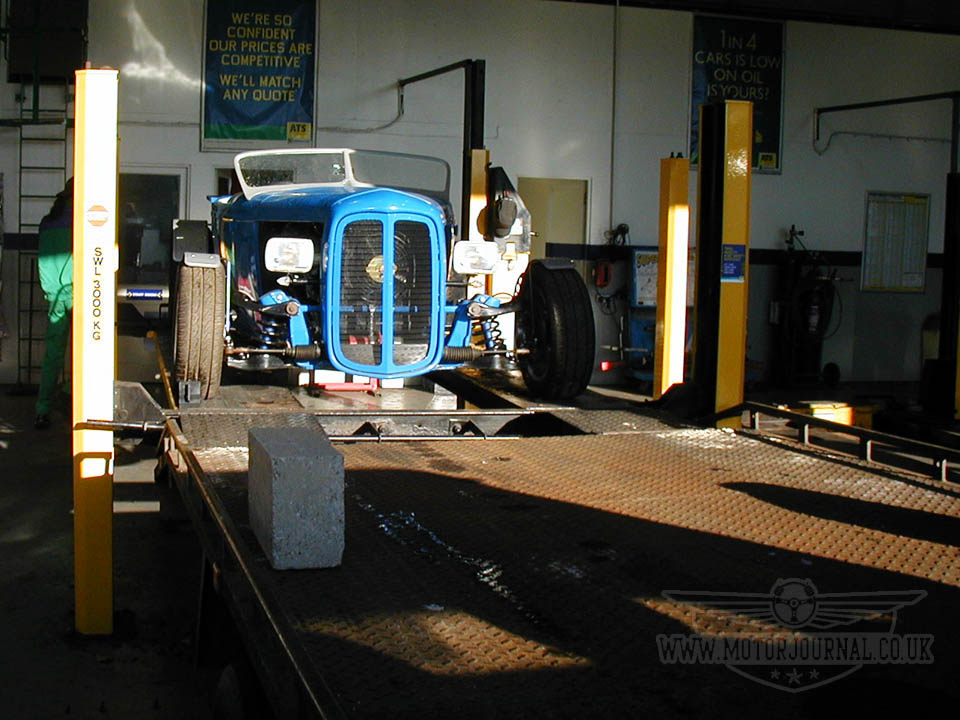 They said I could and so five minutes later the Hot Rod was off the transporter, and a couple of the guys from ATS and I were pushing it back to the motorcycle shop.

After a quick chat with Steve the Auto Electrician about what I was after he told me to leave it with him, and collect it in a couple of days time.

A few days later and I was back to collect the Hot Rod, if I had thought about it I should've put some petrol in the tank so that atleast I could drive it out, but I hadn't, and so we pushed it round to ATS, and loaded it on to their ramps, before putting it back on to the transporter. That was simple enough, and so with £450 for the wiring handed to Steve, and the Hot Rod on the transporter, I headed for my garage, and the rigmarole of getting the damn thing back off that transporter! 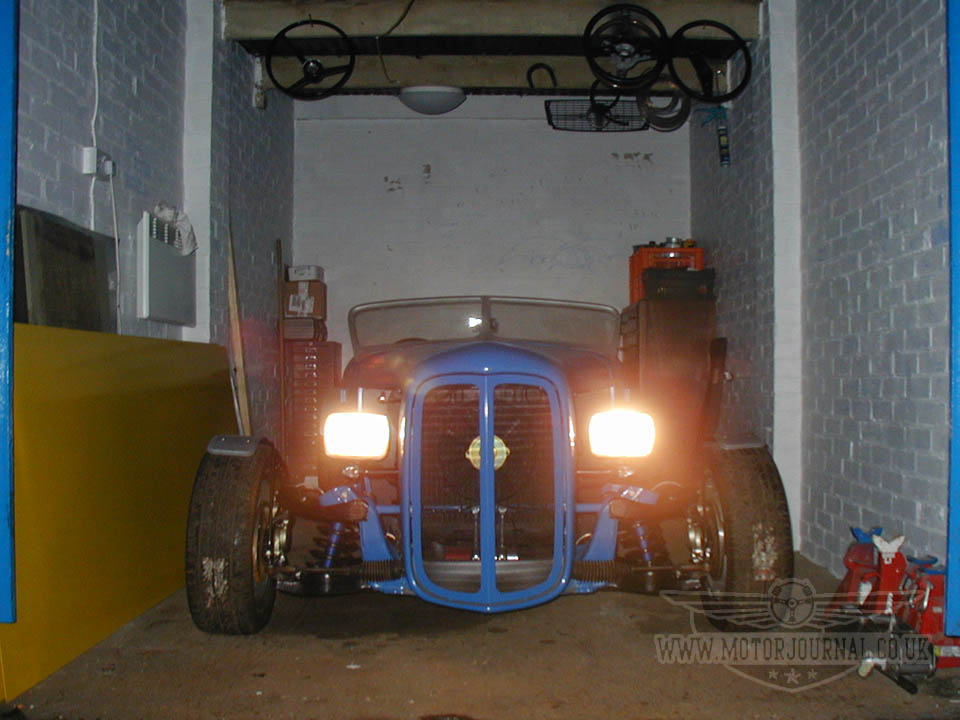 Back at my garage, I started to rig up the concrete blocks, and ramps to unload my Hot Rod, this took about an hour to unload it, but it felt like forever. Every time I moved the concrete block to roll the Hot Rod back a little more made me want to raise the suspension up a bit more. The trouble was, as I had cut the rear springs this meant I would be needing to buy some new ones. I was furious, because this meant that I was still atleast two steps from being finished. At the beginning of the week I was thinking, get it wired, MOT it, then we're done. Now I was thinking, change the springs, get it MOT'd, and then were done. But the more I thought about it, the more I came to realise that there were still other things to do before we were done. The thing still needed fluids, oil, water, and even brake fluid, but once I'd done that, then surely I could MOT it, and be done. Still, I figured that it just needed little more than a bit of a service, and how long could that take?

With the Hot Rod finally back on the ground I pushed it into my garage. I was starting to feel a little bit at ease with it all, like I was finally at the end, and frankly I was glad. As I closed the door I suddenly realised that I'd not yet even tried the electrics, at the very least I should see if the lights worked.

I put the keys into the ignition switch and turned it on. The idiot lights lit up, and I flicked the key just to see if it would spin the engine, it did. I was pretty relieved as that engine hadn't turned over in about three years since it was plucked from my old Granada. I clicked the key back and just tried all the lights, they all worked, infact everything worked just as it should. This was why I wanted a professional to wire it, If I had done it, and something didn't work then I would've no doubt be plunged back into the depths of despair, for something that may well have been a simple fix. But having somebody else do it who knew 100% what they were doing meant that even though it cost me money, it worked first time.

I sat in my little budget Hot Rod for a bit with the lights on just looking at my gauges all lit up, and for the first time in a really long time I felt pretty relaxed about it all, finally it was alive.