I must admit, swanning around in a big Mercedes, and looking down that flight deck of a bonnet while I waft along in it does make driving this thing feel rather special. It glides along effortlessly, and feels quite at home either driving along country roads or bombing down the motorway. It's quite a long way from being pristine, and in no way could it be said to be in A1 condition, but I don't think it would take a lot to get it there. A half decent paint and bodywork man would probably have this thing looking top notch in no time at all. However, I am not a half decent bodywork man, and therefore it will stay as it is while under my ownership, and even though it isn't perfect, it still feels rather special when I drive it, and I really do enjoy it. In short, it's great! 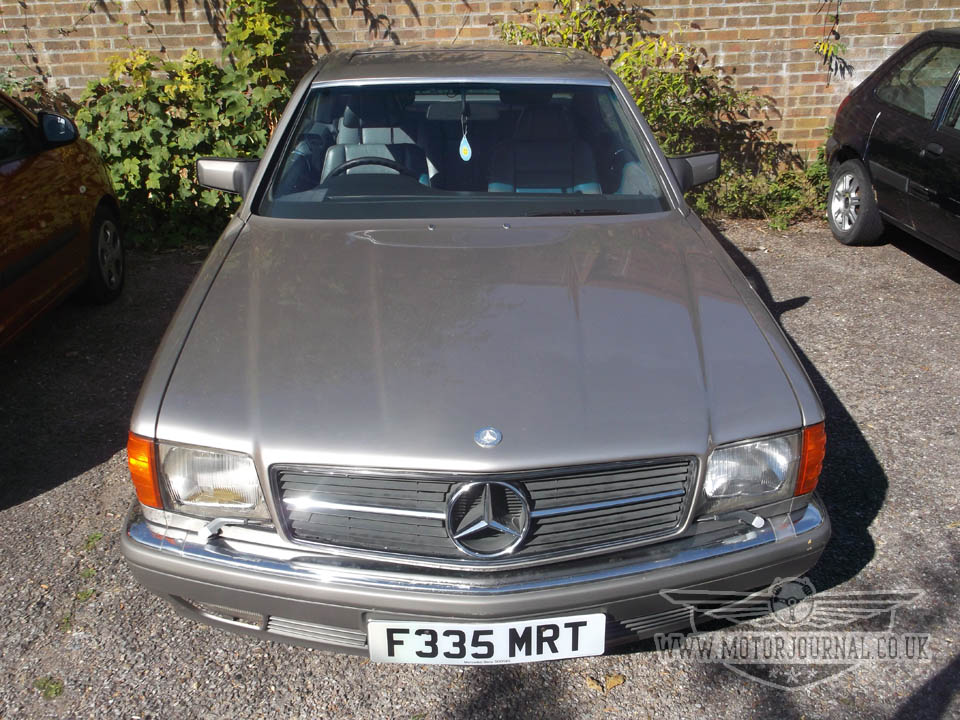 Although far from pristine anywhere on the exterior of my Mercedes 500SEC, one thing that probably lets the overall look of the thing down more than any other is the wheels. I've always thought that wheel choice can make or break the look of a car, and for me, these wheels break it. Personally I've never been a fan of these wheels, and even if these were in good condition I think they look awful on these big old Mercs. 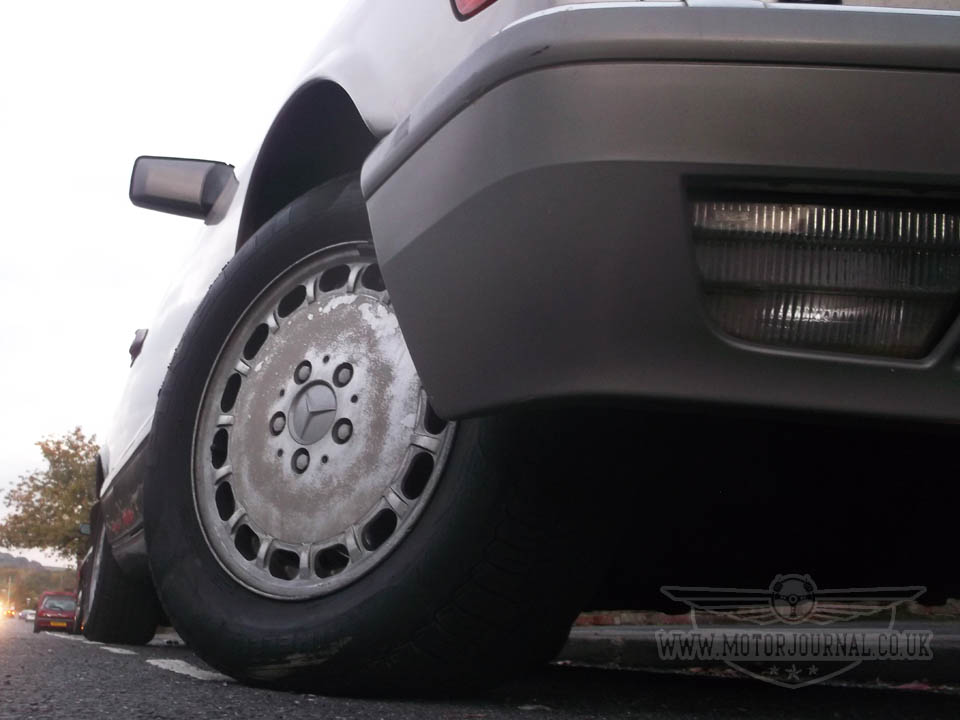 But these ones in particular, despite not having suffered much in the way of kerb rash, have really suffered in the local car wash by the looks of things, and therefore they could really do with a bit of a re-furb. I toyed with the idea of painting the centres black, but I really don't like black alloy wheels. I always wonder why you would go to the expense of having a fancy alloy wheel, and then paint it in a way that it resembles a steel wheel that has lost it's wheel trims? So, after a quick browse of fleabay... I managed to pick these up for just £90, although they're an inch larger in diameter than the original wheels, but as the tyres are in quite good shape I thought that I'd have them. Better yet, and more by luck than judgement, the outside radius of the 16" low profile tyres on the new wheels, was very close to the outside radius of the 15" taller profile tyres on the original rims, and so I popped them on. One thing I wasn't expecting was the wheel bolts have a strange (to me atleast) design. The threaded bit is normal, as is the shoulder that mates with the wheel, but then there is this long extension bit, that goes up to the head of the bolt, like this... 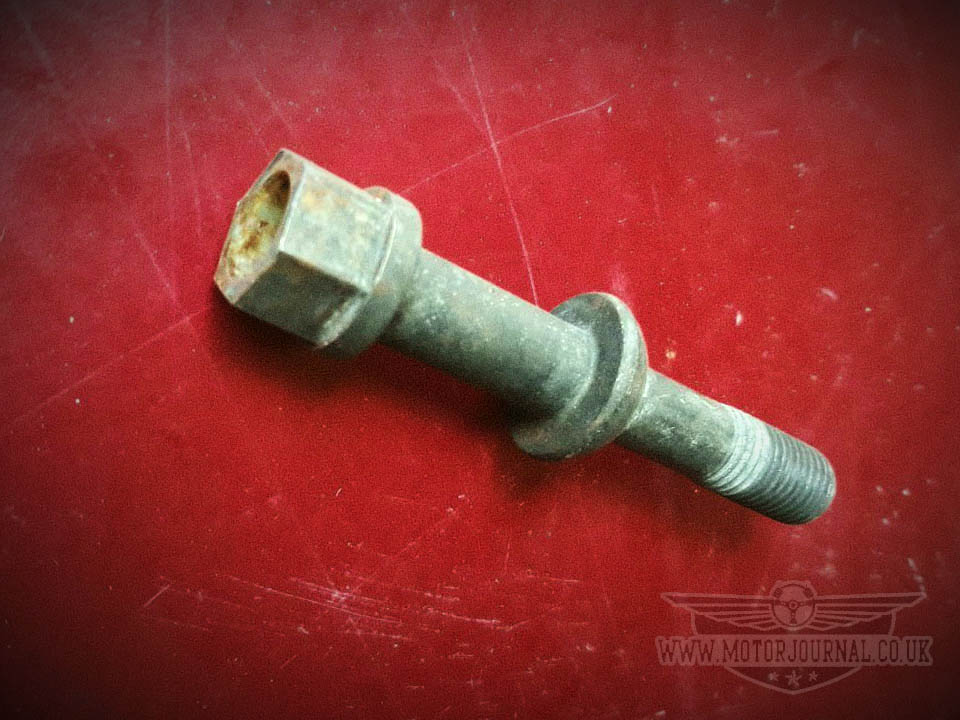 Sheltered automotive life I've had, I've never seen a wheel bolt anything like this before, my previous SEC wheel bolts were pretty much a standard looking wheel bolt, but these seem to have this extension so that the bolt heads are flush with the outside of the SEC wheels once they are tightened up and have the bolt caps in place, and this is fine with the standard wheels. But when used in conjunction with what I suspect prevously called a Mercedes CLK home, they're not so good. The problem is that the added length of the bolt after the shoulder means that almost all of the bolt head is poking outside of the wheel, the problem is made worse by fitting the bolt caps on top of the bolt head. I amost feel like I've got some sort of wheel spikes as if I'm going on for some sort of chariot duel! I'm trying to over look it, and focus on the far prettier and better condition wheels from the CLK, but those bolt heads poking out is not a good look and I know it.

Anyway, despite this, and with the new wheels fitted I took it for a bit of a spin-a-rooney. Of course it feels exactly the same, however in my minds eye I look a damn sight cooler with these wheels, despite the gladiatorial chariot wheel spikes! The trouble with this car is that I want to fix it up a little, and make it really special, but I must resist as I've already added two Toyota Rav4's to the fleet, so I'm really not planning to keep the old thing as much as I'd love to. You just can't keep them all dammit! Although I have tried talking to Mrs Clint about having the Mercedes instead of the Rav4, but there's just no way. By all accounts if it had been a manual she probably would, but she's just not an auto fan. She's had a couple of automatics before, but tends to sit there manually rowing through the gears. Strange girl, personally I get into an automatic and instantly turn into Mr. Lazydriver! 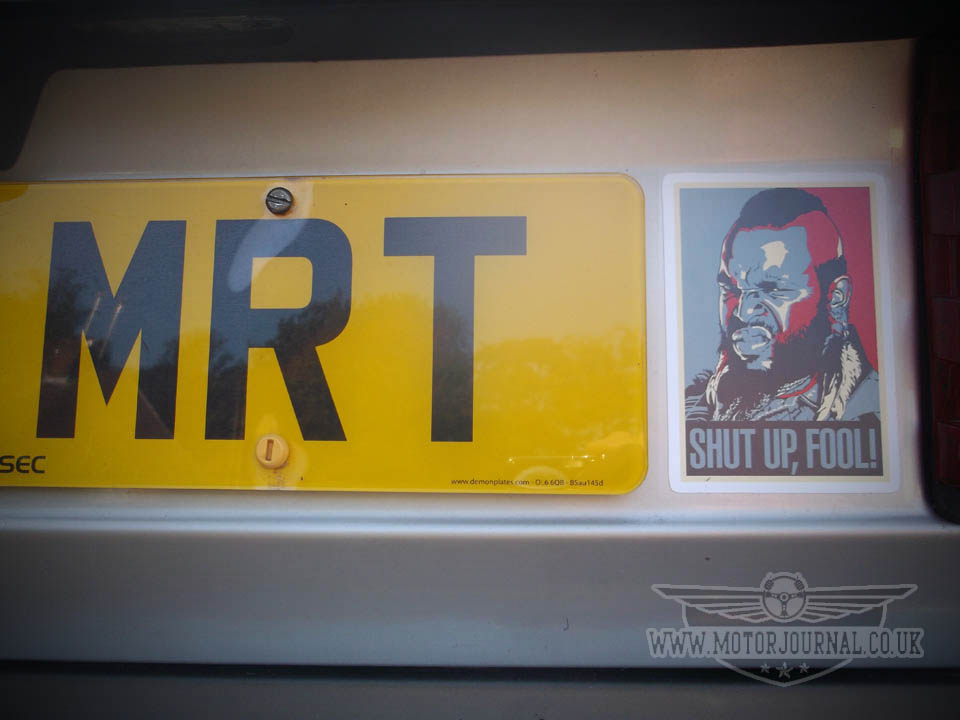 But with the new wheels fitted there was just one modification that I felt I needed to do to the Mercedes, and if I'm honest I don't know why felt compelled to add this sticker. I reckon it must be because I'm just stuck in the eighties watching trashy American tv shows like the A-team... Still, sticking it to the rear of the Mercedes next to the numberplate made me chuckle! 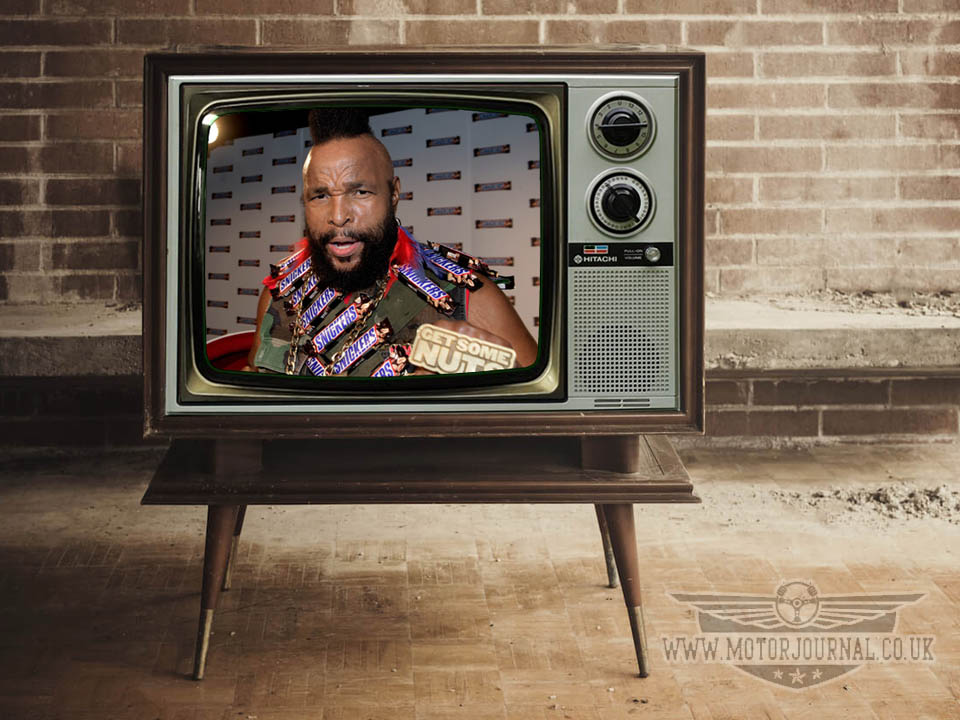 Of course, my two little Monsters now want to know why I've got a sticker with the guy from the Snickers advert on my car, clearly they still need some educating! But rest assured that over the next couple of weeks or so, those two little suckers can quit their jibba-jabba while they're watching my old A-team DVD's, by the end of the year I reckon they'll love it when a plan comes together! 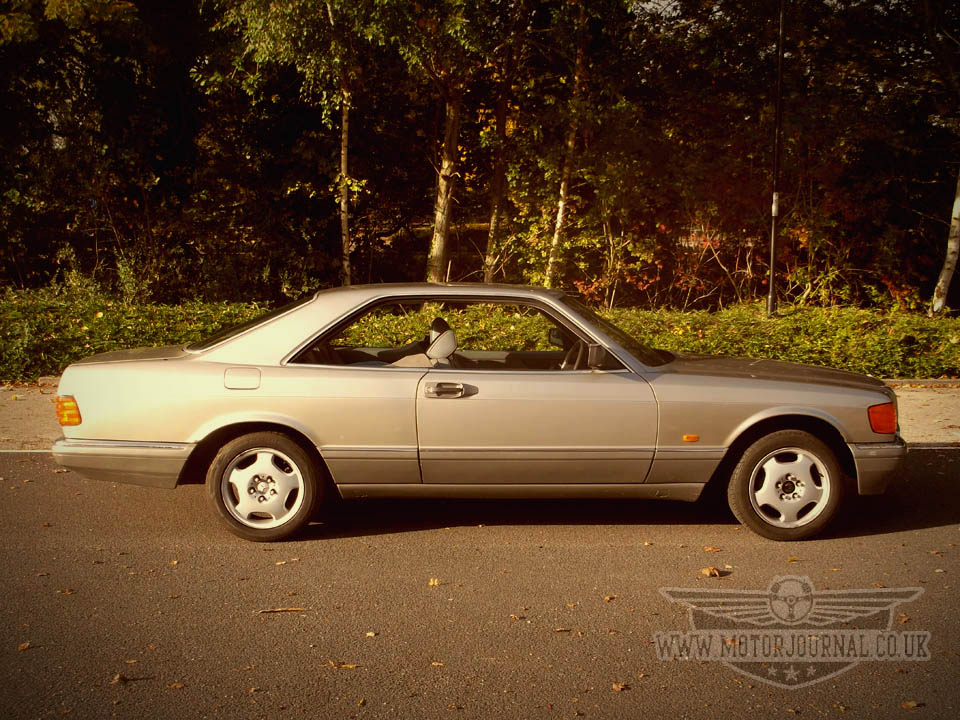 Anyway, away from the crazyness that is my fondness of those soldiers of fortune, with the CLK wheels on I think that the SEC looks far better, especially from the side when you don't notice my wheel bolts poking out quite so much. I didn't really set out to do any modifications of any sort to any of the cars that I planned to have this year. At the most I had planned that maybe, at a push I might fix something that broke while it was in my care. But here we are, nine cars in and the second car that I've changed the wheels on in order to improve the aesthetics of the thing to my eye! My worry is, especially on this thing, will the change of wheels devalue the car to somebody who may well want it to be as original as possible? I've no idea to be honest, but it's too late now because it's done, and worse than that it can't be undone because I've already sold the original wheels. Better yet, the CLK wheels cost me £90, and I got £200 for the SEC wheels. This means that I only have to get £1890.01 for this lovely Mercedes to break even, fingers crossed I'll be able to manage that, but only time will tell.