I've had other 4x4's in the past, but it's safe to say that from my back catalogue of previous 4x4's this is my favourite. It's not the best, as leaving 4x4 pick ups aside the best 4x4 I ever had was a scruffy old Range Rover, but then, as we all know Land Rovers are the best 4x4xFAR, or so were told. But it's safe to say that my old scruffy Range Rover was a very capeable car indeed, and very comfortable. That being said it was also very thirsty being that it was an old one, with an old V8 under the bonnet. 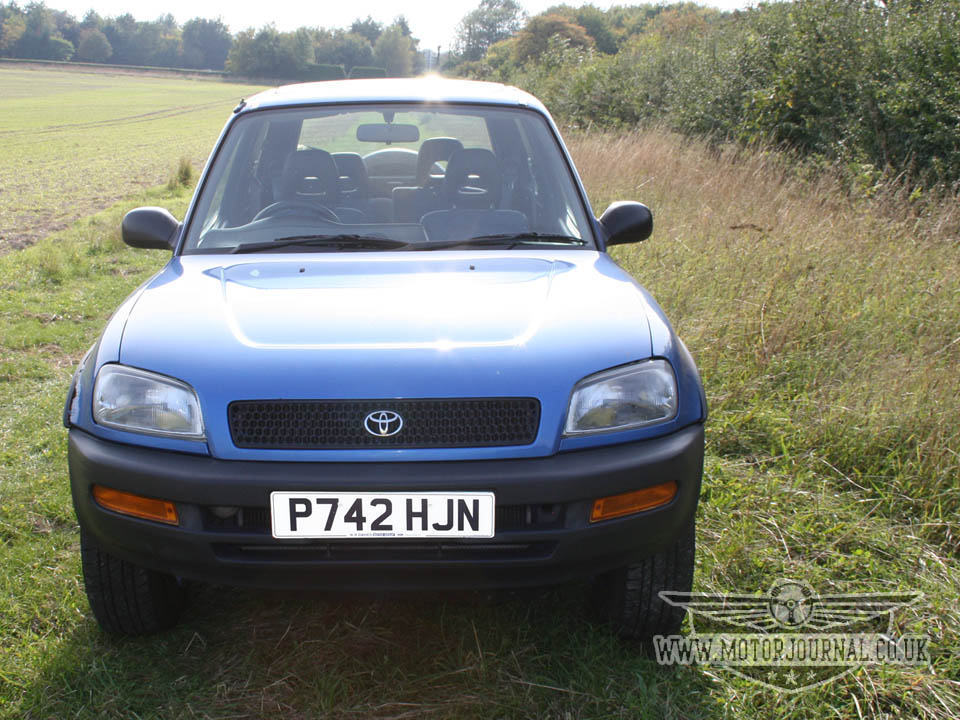 But for a cheap little runabout this almost throw-away Rav4 would be hard to beat. I don't know if it's because I found the Golf to be quite dull, or that this Rav4 is actually really good fun to drive, but I find myself getting in it and driving it for any little excuse. The other evening I almost found myself driving to my friends house in it, just 300 yards from BelongaClint.

I'm not the only one either, I think that if she's honest, Mrs Clint has her eye on it too! I feel that before I do sell it on I should actually ask her worshipfulness if she wants to keep it for herself. Infact I've even started to collect a few bits and bobs to improve it just incase.

The other day on farcebook I found a fella who had in the past broken a few Rav4s, and as such he had cluttered up his garage with bits that he now needed to get rid of. Amoungst those bits were three sets of wheels for a Rav4. He was advertising them quite cheaply, and as he was only in Aldershit which isn't that far from BelongaClint I sent him a message, and arranged to come and look at them. A time and date were arranged and the following Saturday I was heading to Aldershit to have a look at the three sets of Rav4 wheels. As the owner of a pick up the sensible thing to do would've been to have driven down to look at the wheels in the pick up. But as Mrs Clint will tell you, being sensible is not my strong point, so I took the Rav4. 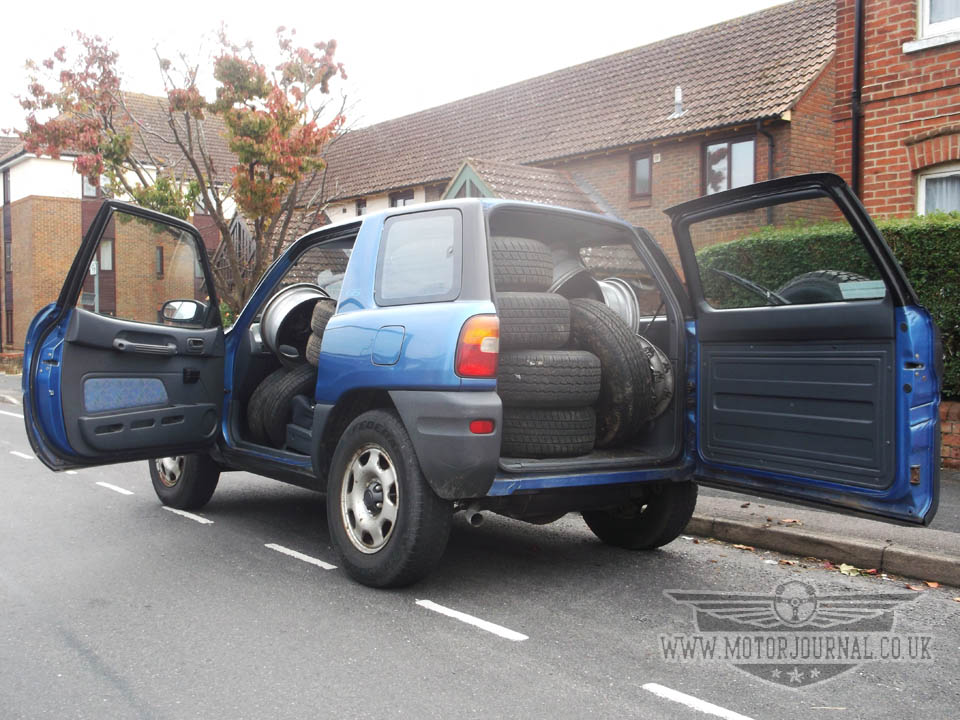 The wheels were a little scruffier than I'd hoped, and only nine of them had tyres on them. Sadly the best tyres were not on a complete set of matching wheels, although all the tyres were the same size. The guy wanted just £40 per set, and so cheekily I offered him £70 for all three sets just so that I could use all the good tyres, and create a matching set of wheels for my Rav4 all with good tyres. Not surprisingly, the seller turned me down, so I upped my offer to £80, he turned that down too! For me that was as far as I was going to offer, and I think that he just wanted them all gone so he could have some space in his workshop back, so he said that if I could make it £100 I could take them all with me. I told him that I only had £80 with me, so it was £80 or nothing. The seller looked at his pile of wheels, looked at me, looked at my Rav4, then looked back at his pile of wheels. Then he asked me if I was a gamblin' man? I said not really, but I have been known to indulge in a gamble or two. So he said that if I could get all 12 wheels into the Rav4, close the door and drive away I could have them all for free. But if not then I had to buy them all, and take them all even if it meant two trips for £140! I said how do you know I'll come back for the ones I can't take on the first trip? He said it was simple, all the wheels with the good tyres on would be collected in the second trip. Hmm, I thought to myself that he'd been quite clever there, because I would be back for the good tyres, because that was half the point of buying them in the first place.

I looked at the back of the Rav4, then took another look at the wheels... I mean three of them didn't have tyres on them... How difficult could it be? I didn't really want to do another trip, and I really didn't want to pay £140 for all of them. But the more I looked at the Rav4, the more convinced I was that I could do this. I looked at the seller, held out my hand and said, OK, lets do this! He shook my hand, and said remember, they've all got to be inside, you can't strap them to the roof or anything, they must be inside, and you've got to be able to close the doors and drive off. I looked at him and said, challenge accepted, before opening the doors and starting to load them in. I dropped the rear seats down, and pushed the front seats forwards a bit and before long I was closing the doors on the Rav4, and holding out my hand to shake my defeated seller. He shook it and said that he didn't believe for one minute that would be able to get them all in. I had to admit that at one point with the boot and rear seat area full I had my doubts too!

As I pulled away I did feel a little bad that I was leaving with all his wheels and tyres, and he was getting nothing, but a bet's a bet. However, I pulled into a Tesco convenience store, picked up a box of bottles of beer, and headed back to his house. The Rav4 was already full to capacity, and I had to drive back with the box on my lap! I knocked his door, and he answered with, "you can't want anything else, you've got no room left!" I said that I didn't want to leave him feeling completely ripped off, even though I felt like that's what had happened, and as a token of my gratitude I'd bought him some beer. He told me that there really was no need, as a bet's a bet, but thanked me for the gesture. I said well, you've got to take it because I really don't have any room in the Rav4 to take it home. He chuckled, took the beer, shook my hand and waved me goodbye as I drove off. 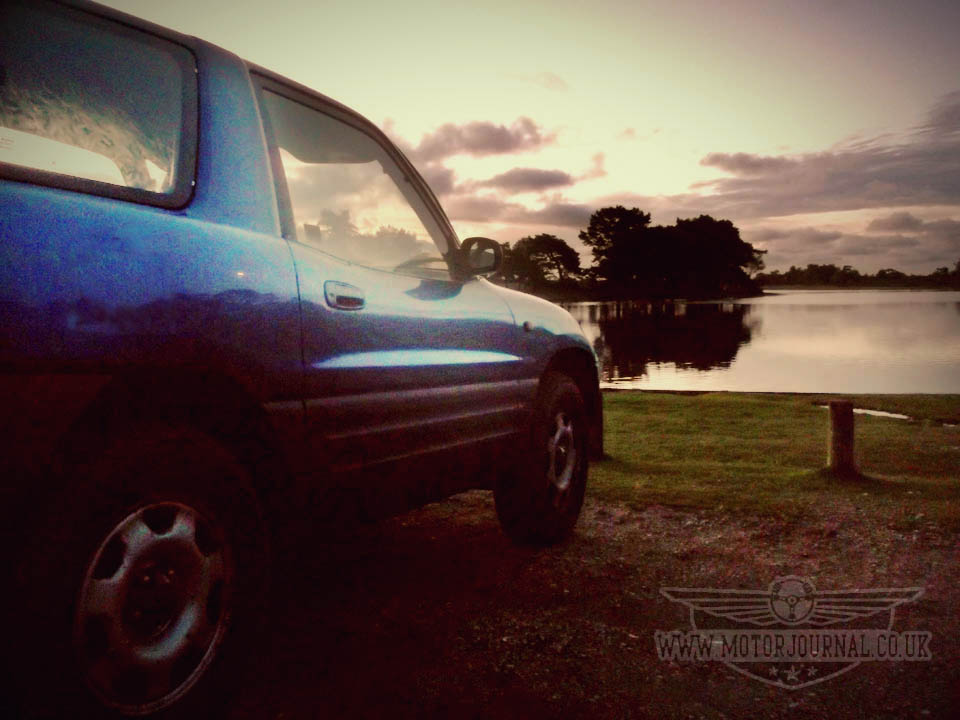 Back at BelongaClint and with the wheels and tyres all unloaded into our back yard I went inside where Mrs Clint told me that I smelled like a rubber fetishist. I wasn't sure that I wanted to know how she knew what a rubber fetishist smells like, so I headed for the shower.

After a good scrub up, and no longer smelling like the Michelin man, Mrs Clint informed me that I was now taking them all out for a picnic in the New Forest. Even though I was now smelling quite fresh the interior of the Rav4 still smelled like Mr and Mrs Michelin had been having some private time in it. But with the windows rolled down we drove to the New Forest and had our picnic watching the sun go down by Hatchet pond, which was actually quite nice. As night fell we loaded our two little Monsters back into the Rav4, and headed for home. Even though we'd left the windows down pretty much the whole time it does still smell a bit rubbery, so Mrs Clint informed me that tomorrows mission for me would be to clean the whole interior. I can't help feeling that she wouldn't be so enthusiastic about it being spotlessly clean if she didn't have her eyes on owning it somehow. So I guess I'd better get on with it!