August 04, 2020
To say that I could see the light at the end of the tunnel would've been an understatement. I could almost taste the bugs in my teeth while I was driving this thing. I was so close to it all being done, and frankly, I couldn't wait. 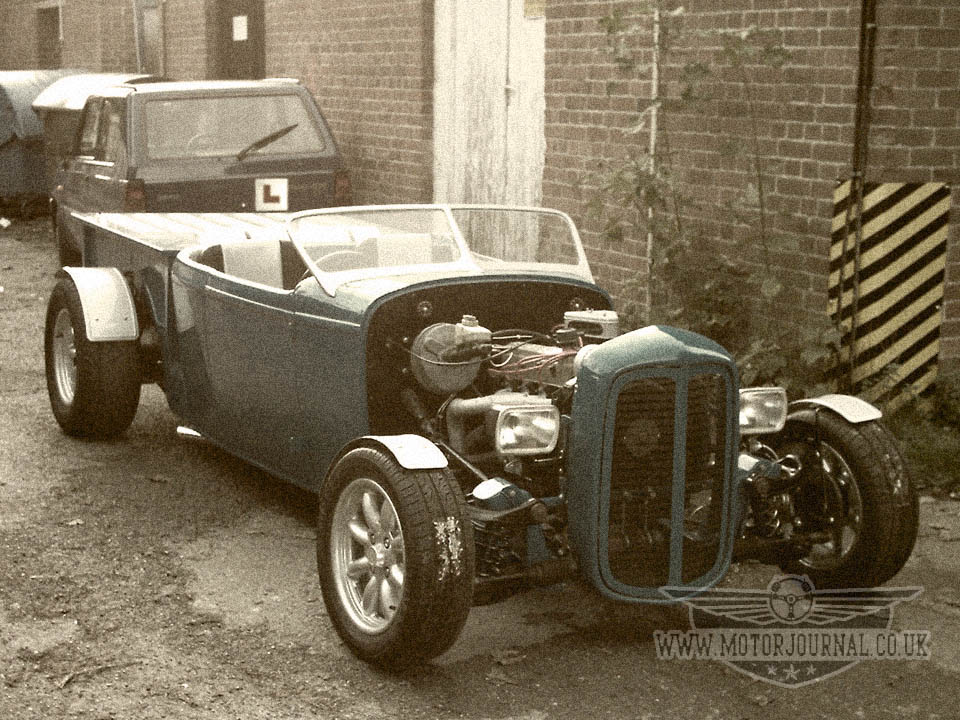 The list on my garage wall was down to just three things, finish interior, do the wiring, and get it MOT'd. As ever I was procrastinating about the wiring. I'd looked at several kits, and I'd looked at re-working the wiring loom from a Ford Granada to make that work, but it just seemed like such a lot of phaff to me. So, while I was putting off the wiring I decided that I might as well finish the interior. 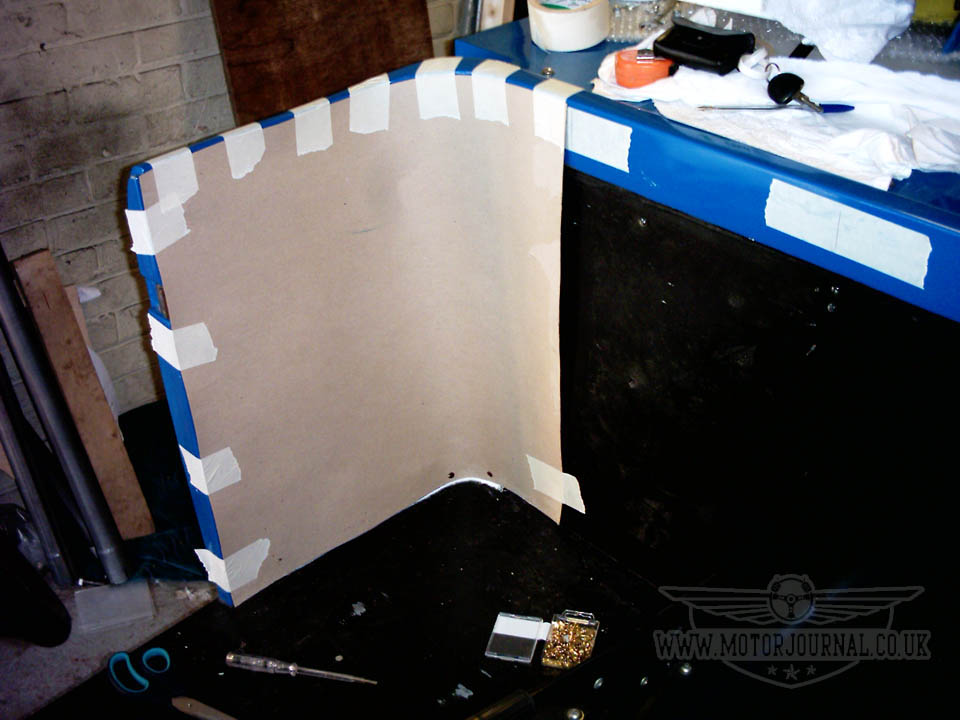 I'd given the door and rear panels a fair bit of thought, and I'd been wondering what I should make them from. The general concensus was that I should use some hardboard, and get it re-trimmed to match the seats. Although I thought that would look good to be honest my bank account was pretty empty, and after spending £380 on re-upholstering the seats, I was frightened to ask how much to upholster two door panels and two rear panels. But no matter what direction I was going to go in I needed to make some templates. You'll probably find this hard to believe on a hand crafted vehicle such as this, but the panels are not a mirror image of each other side to side. Actually, they're not even close, and so each panel needed its own template. But with the four templates made it was time to find something to make the actual panels from.
While working on the Boeing flight simulator building at Heathrow at work one day the answer to my dilemma was literally staring me in the face, Stucco aluminium pipe lagging coverings. The guys who were insulating the pipework that we had installed had quite a few 8'x4' sheets of the stuff, and so I asked them if I might be able to liberate some for my own use. As luck would have it they thought I could probably wander off with three or four sheets without anyone noticing, and so at the end of the day, four sheets were flung into the back of my pick up and I headed for home. 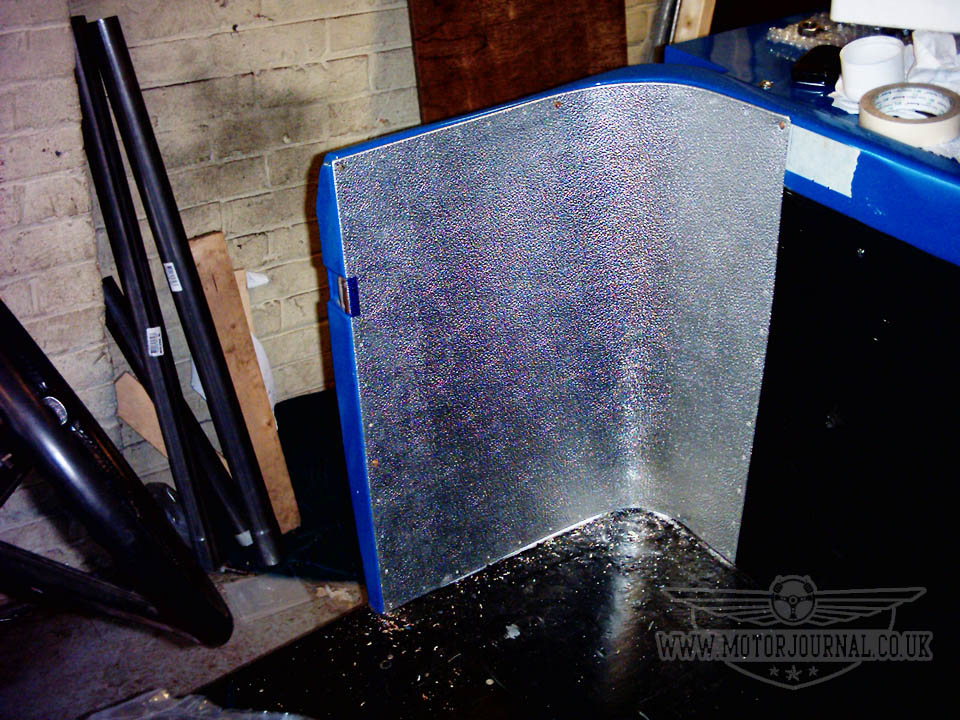 I layed the templates on the back of the Stucco sheet and marked out their shape with a Sharpie. I made the markings about an inch larger all the way around so that I could put a piece of wire inside, and fold them over to give a larger, safer edge to my interior panels. This took me far longer than I imagined it would, but before long I was  trying to ease the panels into their intended position, and manipulate them into shape. With that done I then screwed them into position with some stainless steel screws, and once I was happy with their fitment I took them both off again and sent them off to be powdercoated. 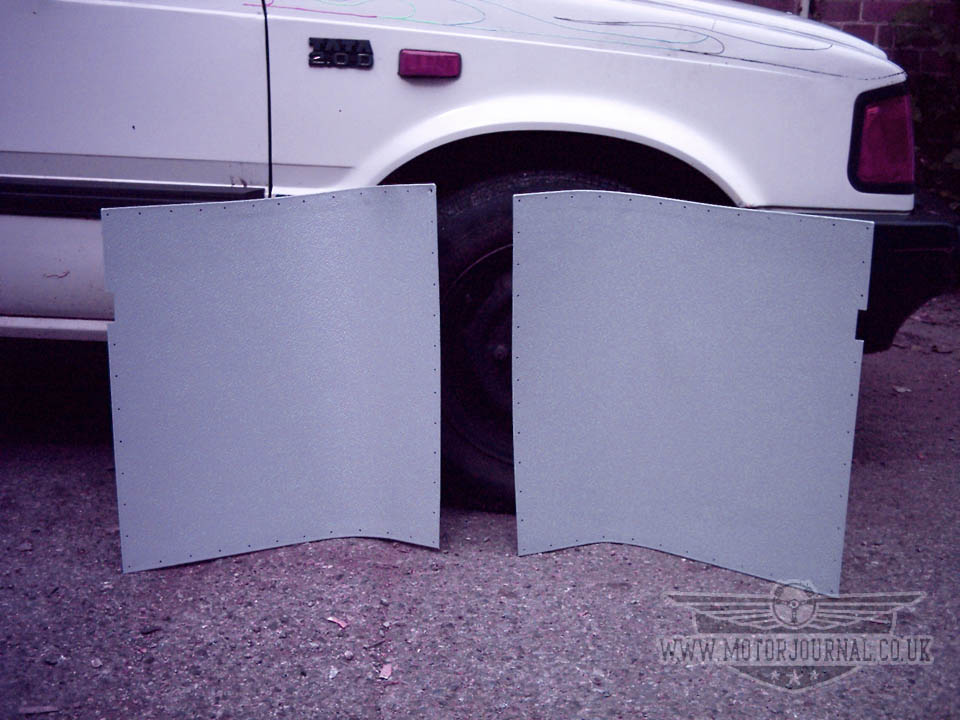 A couple of days later and they were both back in a light grey colour, and ready to go into the Hot Rod. 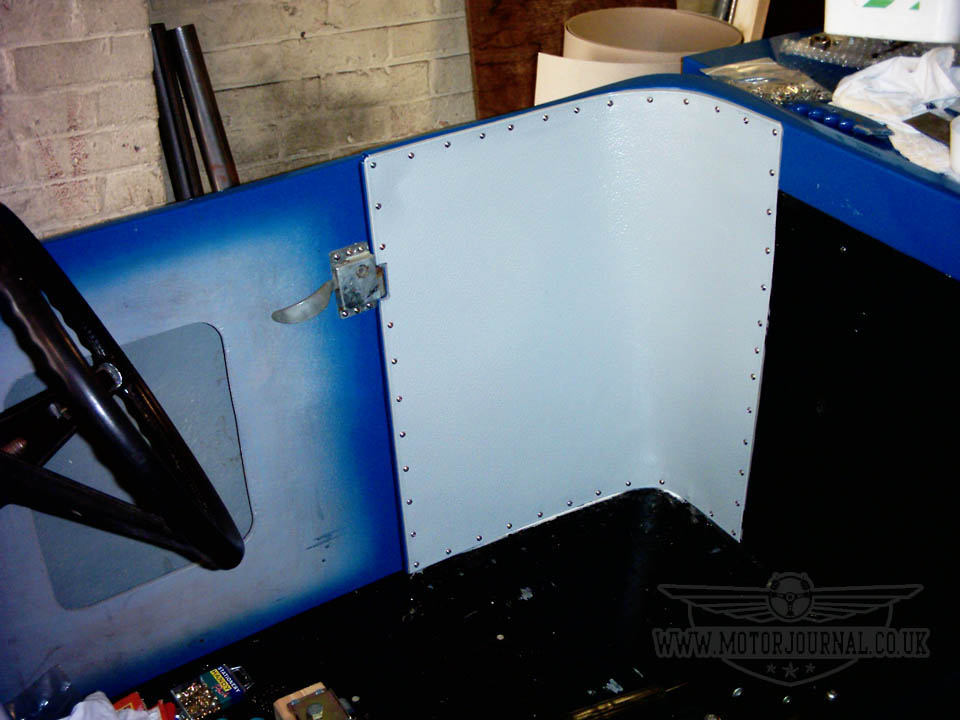 I felt pretty pleased with how they both looked after I'd re-installed them, and despite having to do one of them twice because I'd used the template for the wrong side I felt that the end result was worth it. We had talked about doing them black, but my feeling was that the floor was black, the bottom of the dash was black, and half the seats were black. In short there was enough black in there already. Besides which, I felt the stainless steel screws would've been too much of a contrast to the black, and I thought a light grey would match the silver inserts on the seats a little bit.
With the rear interior pnales done I turned my attention to the door panels. 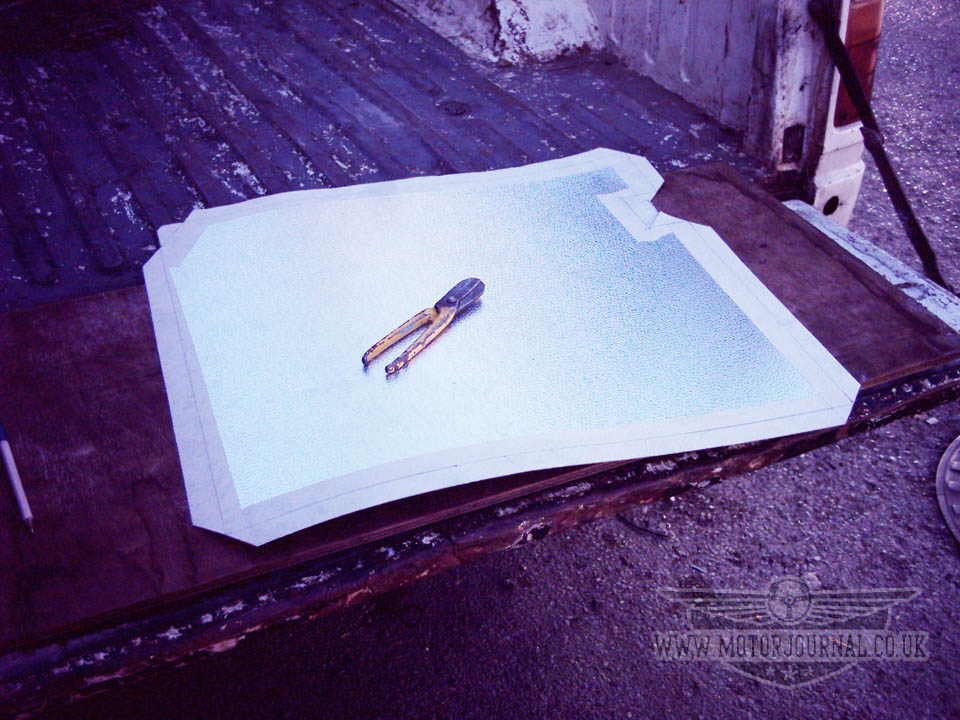 I used the same method of cutting the panel about an inch larger all round than the template, and then folding the edges over a piece of wire to give me a thicker, safer edge. 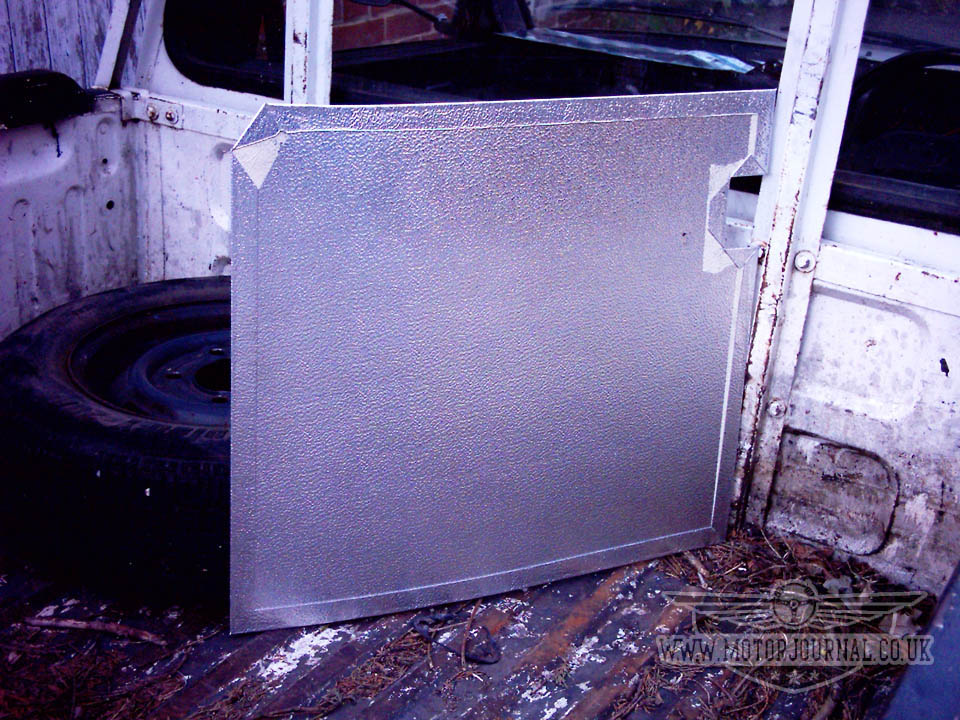 With that done the door panels were a lot easier to install than the rear panels because I didn't have to curve them around anything to get them in there. Unbelievably I made exactly the same mistake as I'd made on the rear panels, using the wrong template upside down to make the wrong door panel. As irritated as I was by all of this it gave my friends a good chuckle, and to this day if I'm making something from a template I get asked if I'm using the template the right way up! 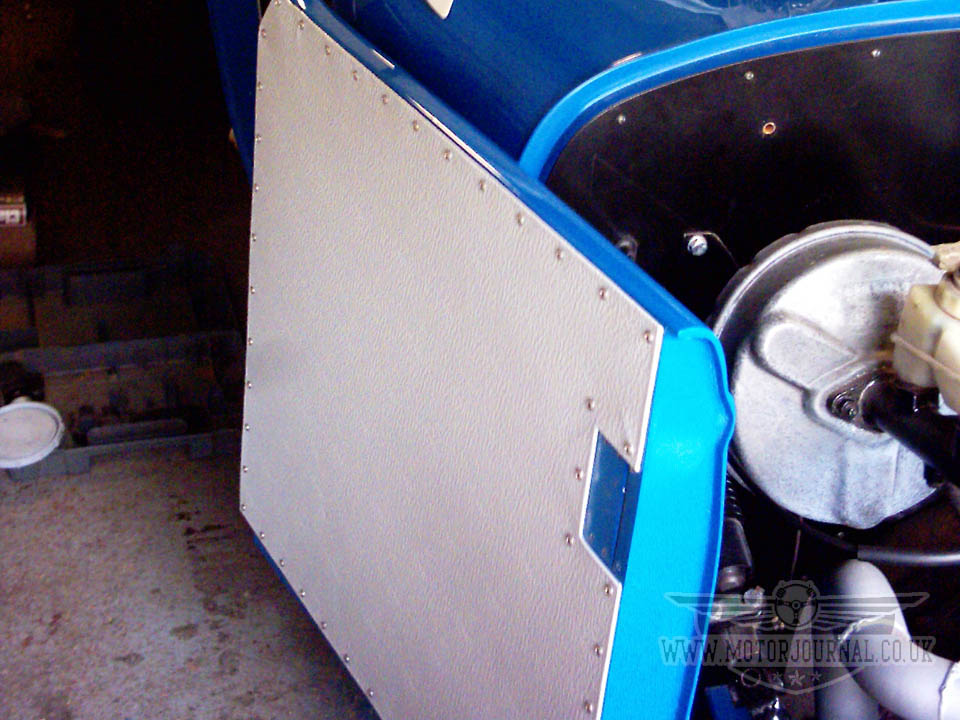 With the door panels finally made they went off to be powdercoated in the light grey too, and were also installed with a good amount of stainless steel screws. 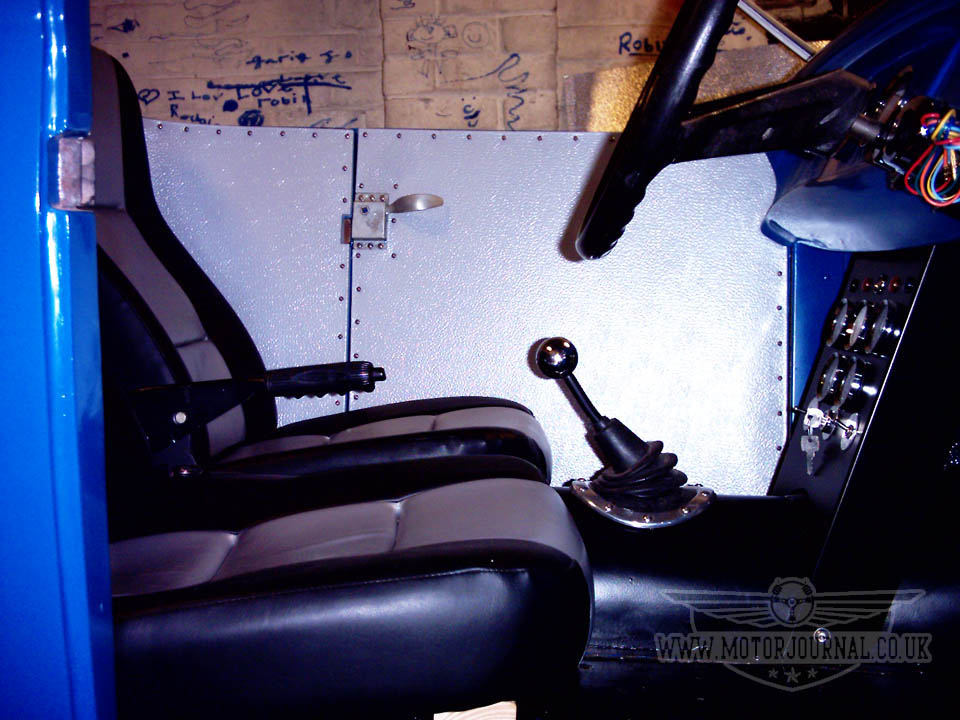 With the interior panels installed I felt that they looked way better than I expected. A few of my friends thought it would've looked a lot better if I'd had used some sort of hidden fixing, or just bondeed the panels to the inside of the Hot Rod somehow. Infact, furthermore most of my friends thought I'd made a mistake by not upholstering the panels to match the seats. But the thing was, although I didn't really know what I wanted, I did know I didn't want to spend another small fortune having the interior panels upholstered in black and silver Naugahyde. Besides, enough of those poor little things had met their demise to make my seats! 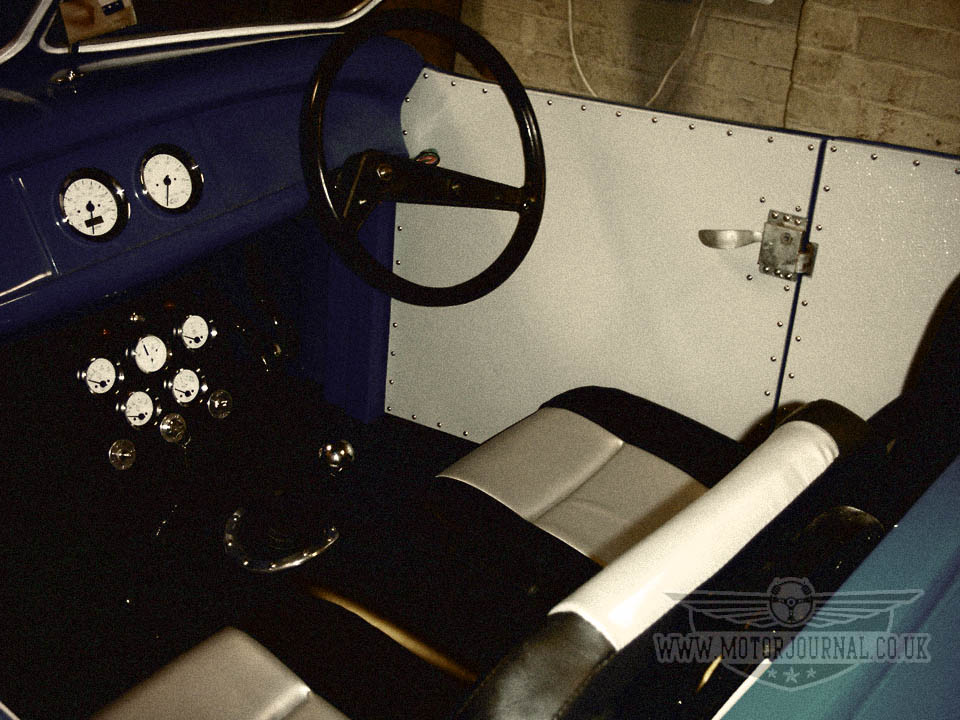 Once I'd decided to use the Stucco aluminium insulation covering I thought I'd accent it with rivets in order to give it a bit of an old aeroplane, or racecar feel to it. However the rivets didn't really want to hold it to the wood structure of the rear of the cab, or door frame, and so the stainless steel screws were decided to be the way forward. Once it was all powdercoated and screwed into position I felt it looked close enough to the look I was after to be happy with it. I did toy with the idea of running a line of screws across the middle of the panels just to add to the look, but I decided not to just incase it looked worse. I really didn't want to make these panels again, and I thought with the screws around the edges it looked good enough for me.