May 07, 2020
The Hotrod was really starting to take shape, but there was still one part of the bodywork that needed to be addressed... 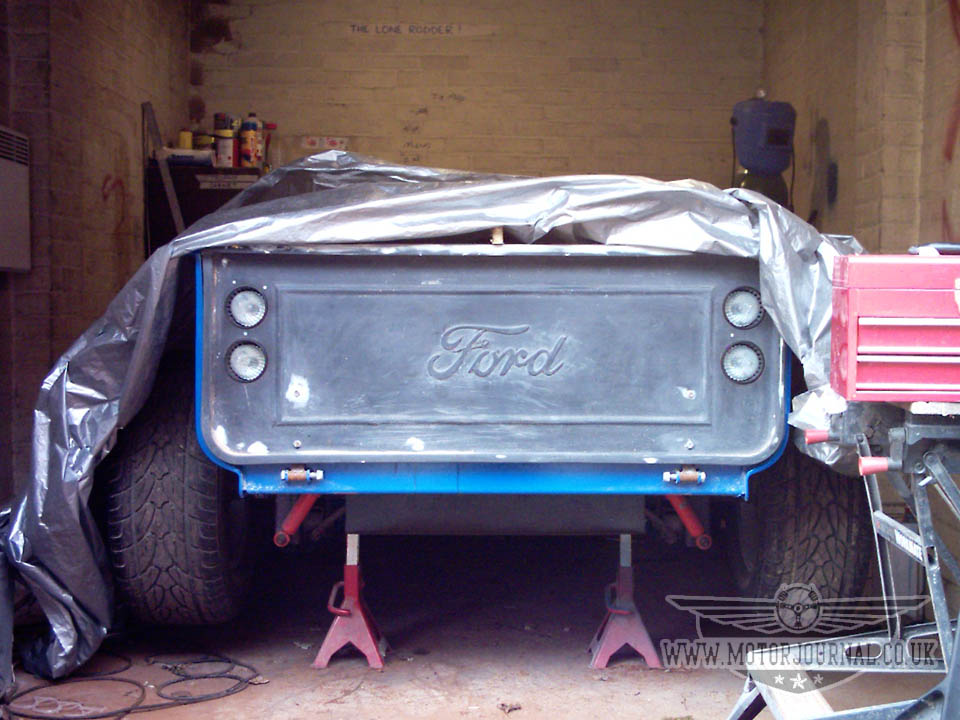 Actually, to be honest there were two parts of the bodywork that needed to be addressed, the tailgate, and the tonnue cover. Because for the most part the Hotrod had been parked in the garage with it's nose pointing out, finishing off the rear end just kept getting put on the back burner. But the more I looked at it, the more I thought that it was getting pretty close to being finished, so really the final bit of paint needed sorting out sooner rather than later. 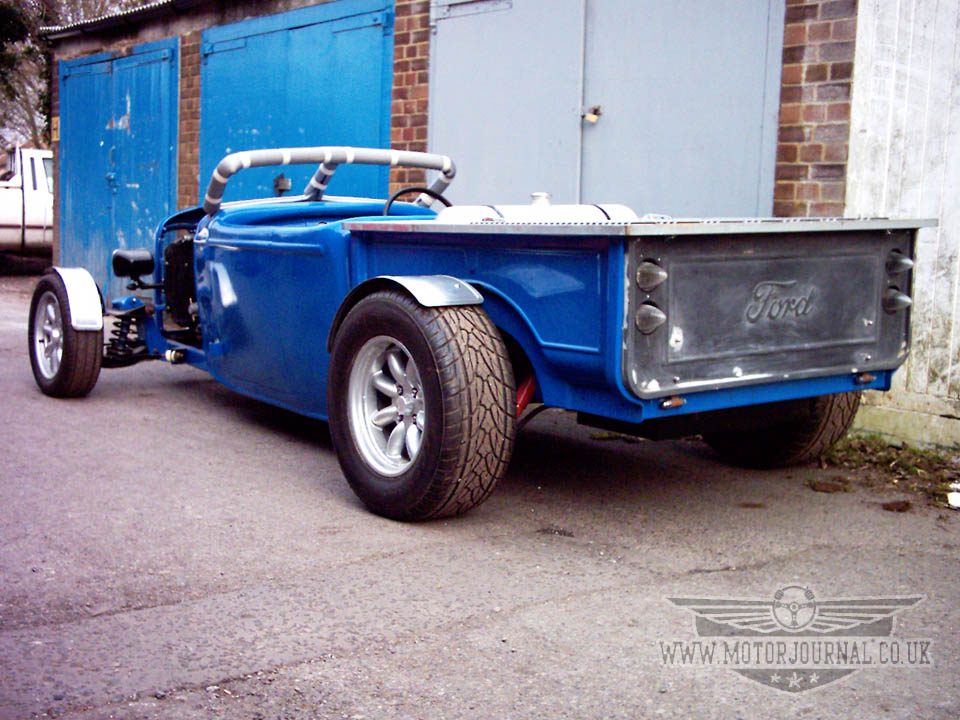 Besides which, I was starting to get a few small patches of surface rust on the steel tonnue where it has been welded, or ground down. Not to mention the edges of the louvres which had also attracted the attention of Mr Rust! This meant of course only one thing. 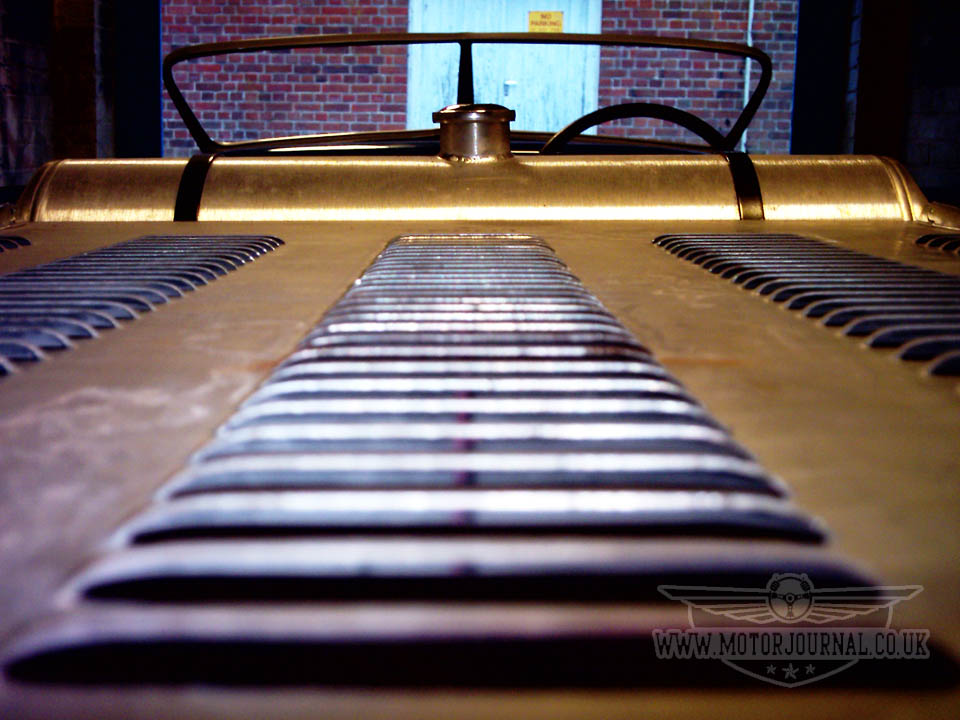 Once more I was at it with the needle file to file each of the 203 louvres smooth! Unlike the previous time, this time it didn't take over a week of evenings with a needle file to get into the corners, and a flat file to do the bigger areas! Starting early on a Saturday morning, by the evening I was just finishing going over the tonnue cover with some sandpaper. The tonnue was now in good enough shape to have it's paint applied. I had been backwards and forwards on what colour I should have it painted. I was very tempted by a satin black, and M.R. thought that it would look great satin black, but he thought it would look even better in the same Fiat Blue Sprint that the rest of the bodywork was painted in. I wasn't toally convinced, but I never saw M.R. paint anything the wrong colour, whatever colour he painted whatever he was painting always suited it. He seemed to have a knack for choosing the right colour for the right vehicle. With this thought in mind I figured the best thing to do was to let him get on with it. 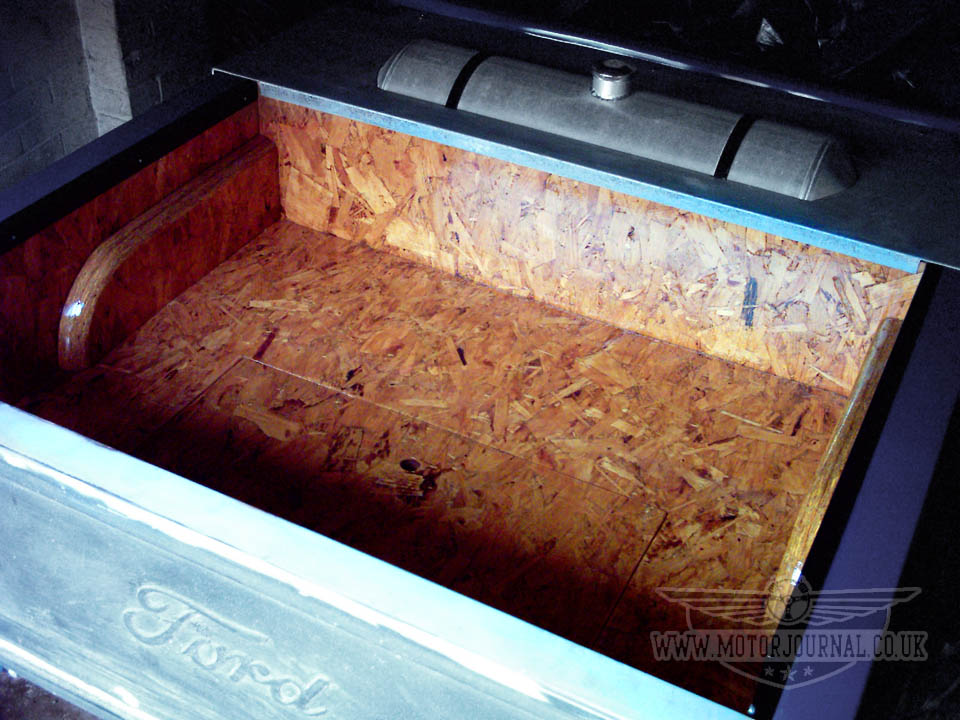 The plan was to spray it in the garage like the rest of the Hotrod, but the big bearded motorcycle enthusiasts who lived behind our garages were having a barbeque, and had asked us quite politely if we could refrain from making too much noise, or filling their garden with paint fumes. Further more they then said that they would like us to attend said barbeque. So with their invitation in mind we stripped the tonnue, and tailgate from the Hotrod, and headed off to eat.

By 01:30hrs the barbeque was coming to an end, and we decided to head off... Not to home, to the factory where M.R. worked. With the tonnue and tailgate already loaded in my P100 we headed off.

Understandably at 02:00hrs on a Sundae morning the factory was deserted. I backed into the loading bay, and M.R. hit the lights. Before long we had the tonnue and tailgate hung up and M.R. was giving them a good going over with some primer. With the primer dry M.R. gave the tailgate a quick guide coat before sanding it down to reveal the high and low spots. It was a bit wibbly-wobbly, but not enough that M.R. thought it was going to look too bad when the top coat was on. So with this thought in mind after a quick going over with some wet and dry sandpaper, and a good wipe down, it was time for the top coat! 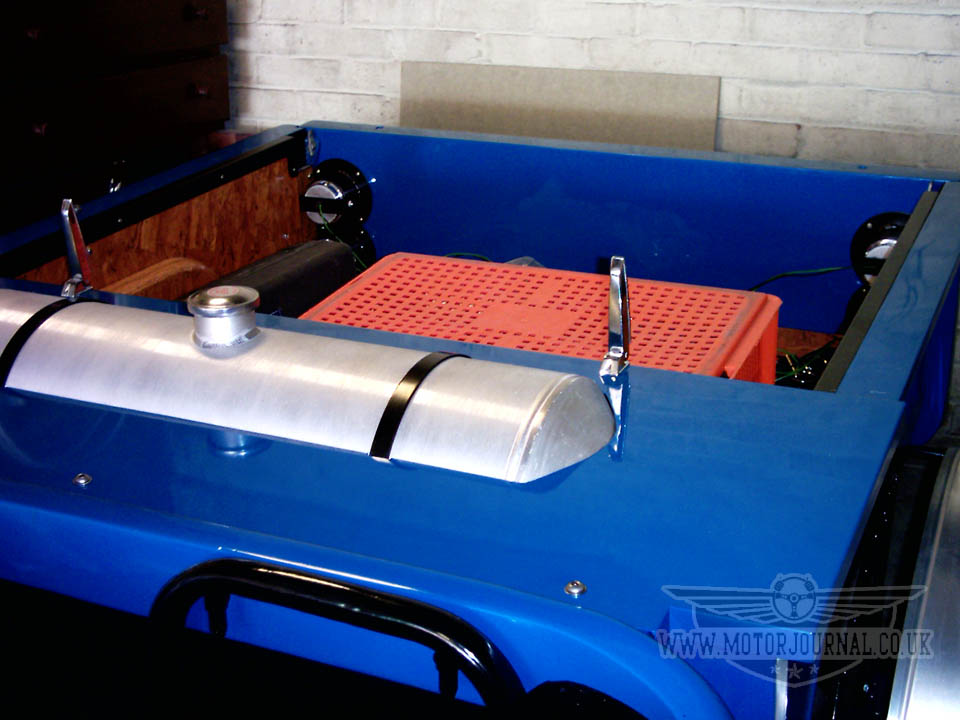 We were pretty beat, so we took the freshly painted parts to my garage, and placed them inside before calling it a day... It wasn't even mid-morning!

The following day after work we were back at the garage putting the tonnue and tailgate on. The tailgate went on first, after the tail lights had been put back onto it on the bench. Then the piece of tonnue that goes around the petrol tank was fitted next. This was a bit of a fiddle as the paint was still pretty soft, so extra care was taken tightening the button head allen bolts that hold it to the bed so as not to damage the paint. Of course, despite this I still managed to, but luckily it wasn't too bad. 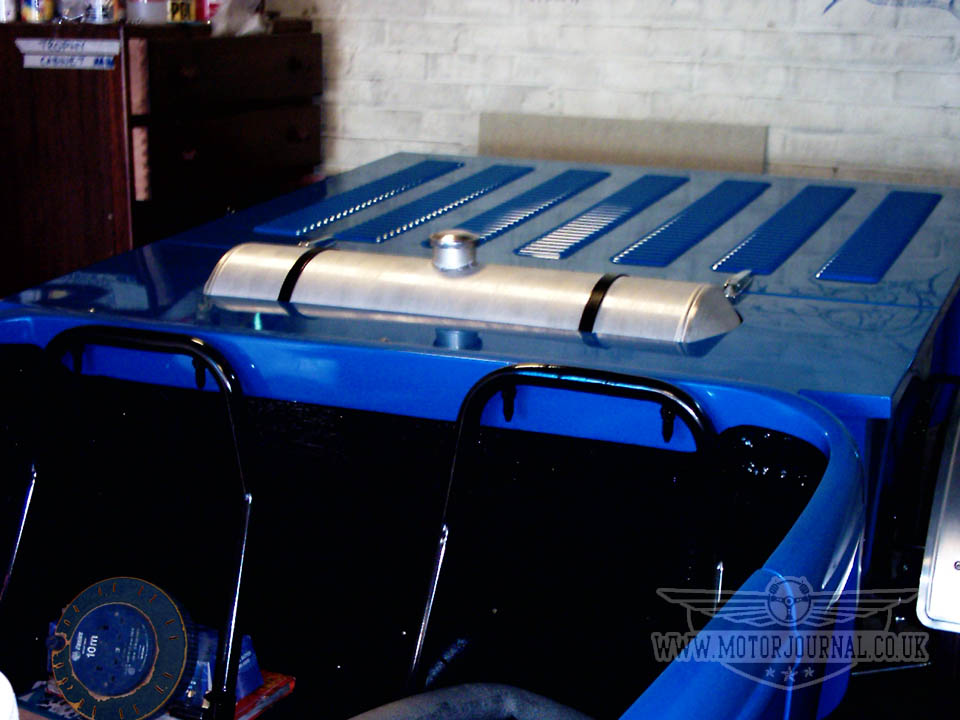 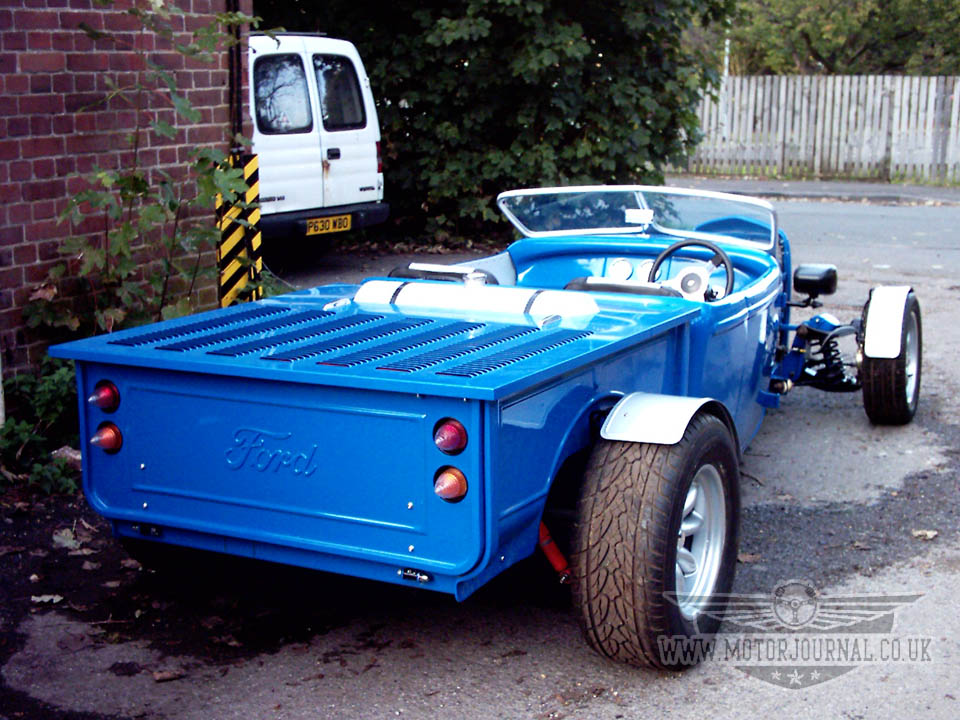 Several minutes later we had pushed the Hotrod out of the garage so we could take it all in for the first time. For the first time the Hotrod was one colour and I thought it looked superb. I'll admit that it isn't quite the colour that I was hoping for, the Ford Tractor blue being a slightly darker shade. But that being said, I now had no doubt in my mind that the Fiat Blue Sprint paint that I had chosen because I couldn't get a paint code for the Ford Tractor Blue was a better choice.