April 05, 2020
While working on the HotRod one Saturday evening we had a little visit from our friendly policeman. As ever he was quite interested in what we were doing, without being too interested in how we were going about it. 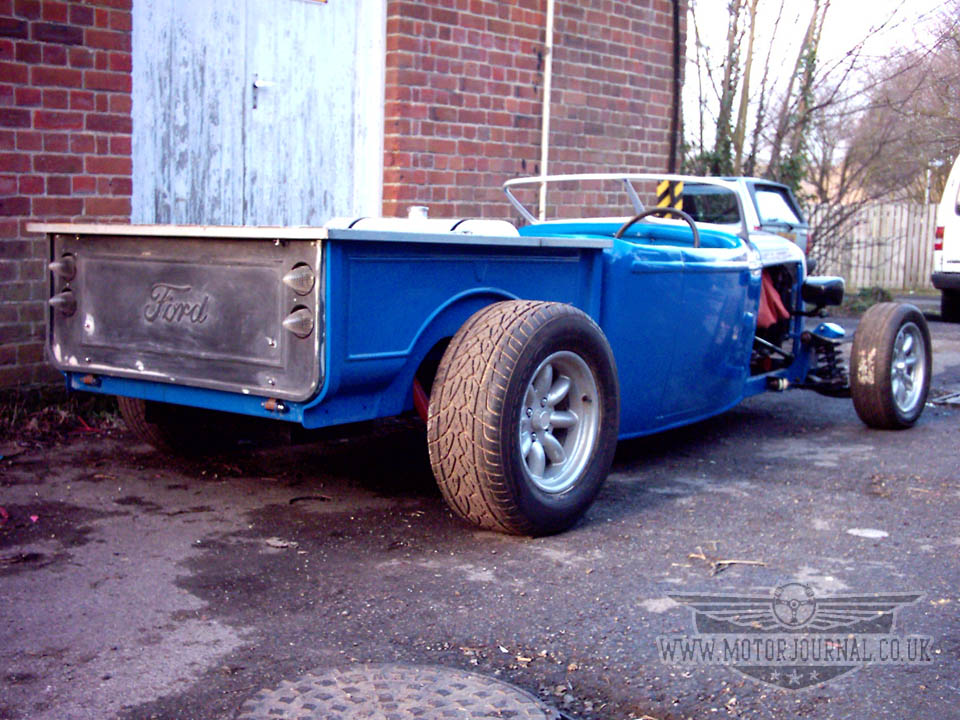 As we casually chatted he said "Whats going to cover those wheels?" I must admit, I'd thought that myself, but I sort of thought that I quite liked it with nothing covering them, and so that's what I told him. He thought about this for a little while before saying, "I think you're going to get pulled over a lot!" Again, I'd thought that too, but as I'd seen countless other HotRods running fenderless I thought I'd try going for the same look. I said to our polieman friend that I'd seen loads of other HotRods running fenderless, how do they get away with it? His opinion was that they probably don't, but in his opinion if it was a dry sunny day then they might get away with it, because you need to have the wheels covered in order for the tyres not to throw up spray as you're driving along. Therefore if it's not raining, you're not going to throw up spray. I looked at my HotRod and said, does this look like a wet weather car to you? He chuckled, and said that my biggest problem was the tyres, If I was running skinny tyres then I would probably get away with it, but my tyres are pretty fat, and that will draw the attention of every traffic cop out there. Again, I was already on his wavelength and had thought that myself. Before he left he suggested that I find a way to cover the wheels, even if it's only an attempt, if it looks like I've tried, then I probably wouldn't get pulled over! 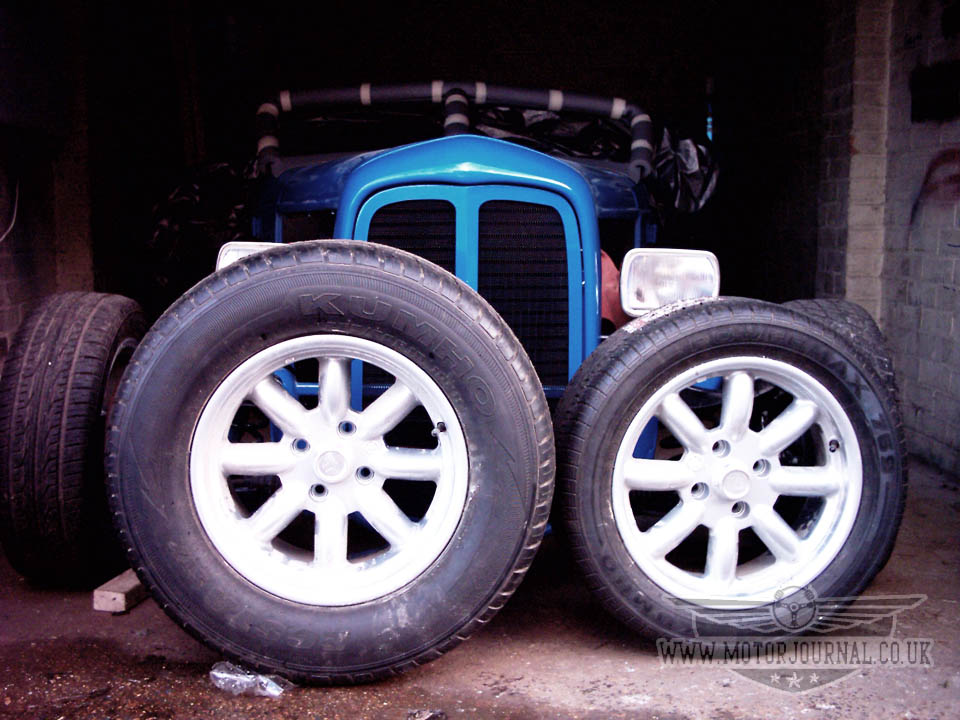 I knew he was right, and M.R. new he was right. I needed to cover those wheels, or atleast, make it look like I'd tried to cover them. I did think about putting full fenders on it, but that seemed to be a long winded way to go about covering the wheels, plus I was feeling like I'd already spent far too much time working on this thing! A quick solution was needed. M.R. suggested cycle fenders, and I think this would've worked if we could've found something that worked with the diameter of the rear tyres. But I felt this was along the right track. Then I saw a little car that was very much in the theme of a Lotus Super 7, although it was more of a cheap knock off. But anyway, what he had done was to make little flat metal fenderettes (for want of a better word) that fitted snugly against the tyre, were quite small, and were painted matte black so the didn't really show up at all! I liked this, and this was the look I was going to go for... Sort of!

The more I thought about it the more I thought that as good as these plain little fenderettes looked, mine needed to look better. I made some little cardboard templates, loaded them and the wheels into my pick up, and headed off to the little car restoration specialists who had already made my louvred tonnue cover. After a brief chat with them about what I was trying to achieve, I left them to it and waited for the call to say I could pick them up. 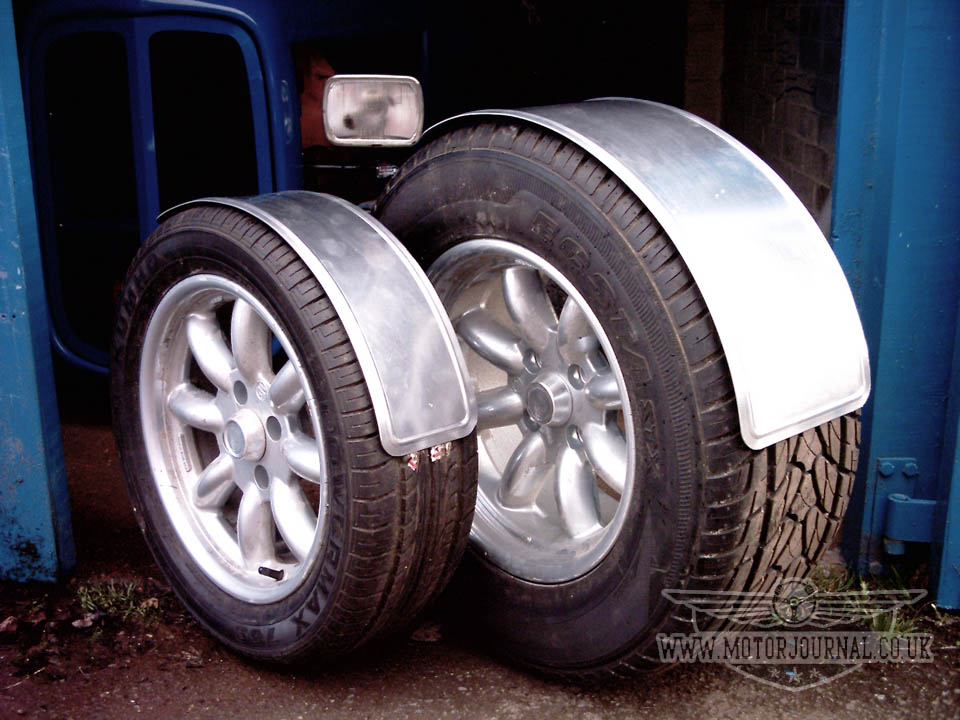 Just one week, and £380 later I was collecting my little fenderettes, now all I needed to do was figure out how to mount them to the HotRod! Not that I needed to, because as ever M.R. was ahead of the curve, and he already had some ideas about how to mount them. After looking at my little fenderettes he left me with some measurements, and told me to let him know when it was all cut. A couple of hourse later, they were all cut, and in the boot of M.R.s car ready to be bent, welded, and powdercoated at work the following day. The next time I saw them we were mounting them to the HotRod, and I've got to say, they looked pretty damn good! 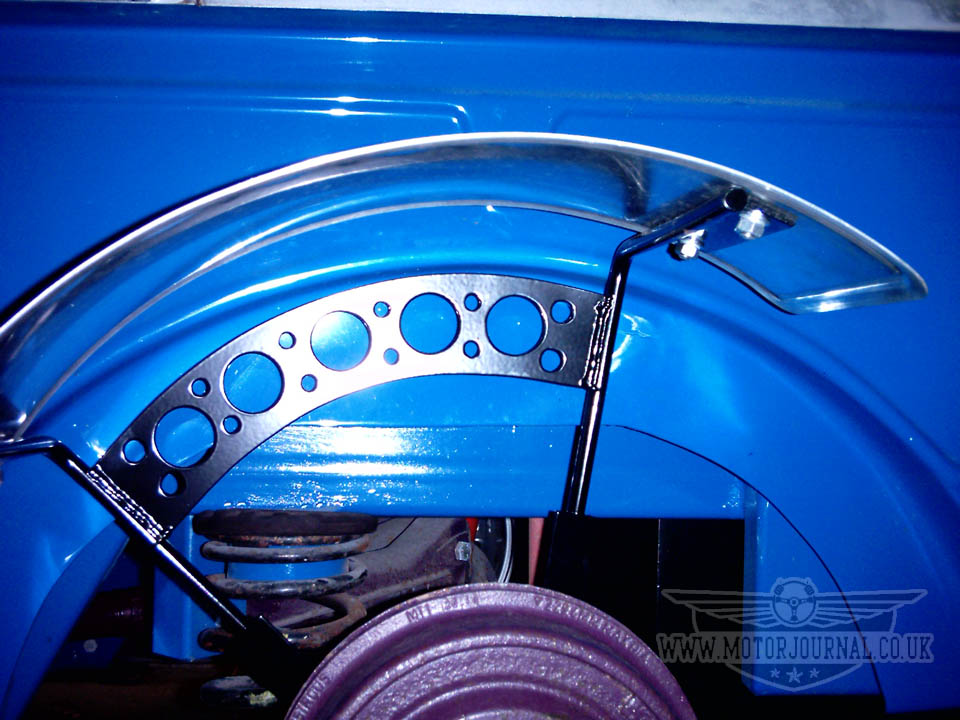 The rear ones were bolted to some bracketry that M.R. had welded to the back axle. 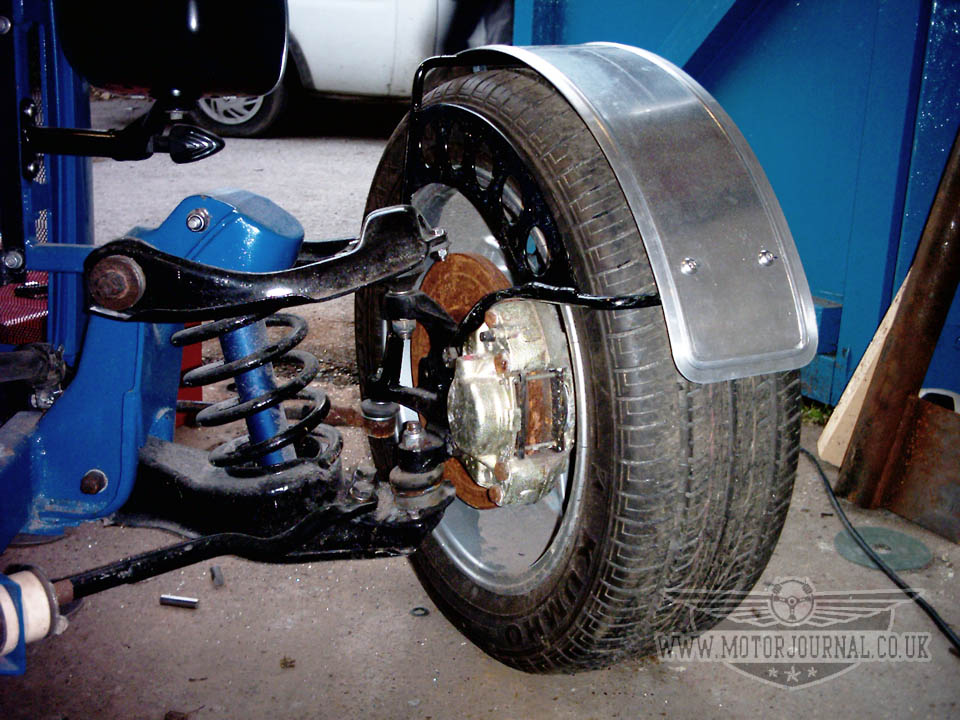 The front ones were mounted to the front hub using bolts that were already in place to hold on things like the disc brake cover, that the original kit car had, but I didn't want to use. M.R. asked me if he should powdercoat the aluminium fenderettes matte black, but now, seeing them with their little bead rolled into them, an expensive addition I might add! I wasn't sure that matte black was the way forward anymore. 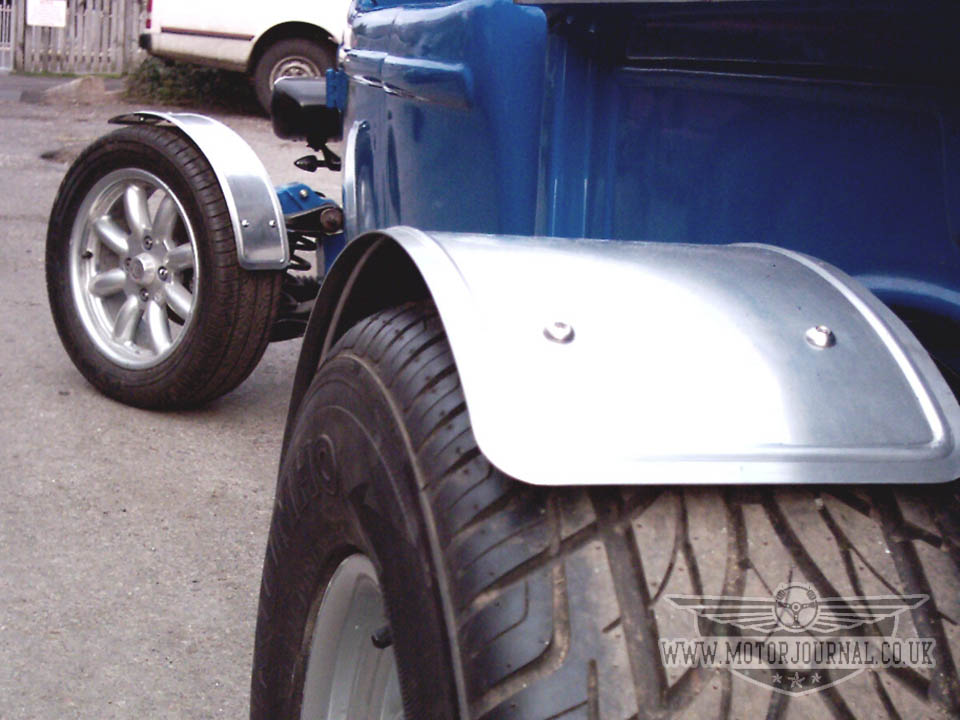 My feeling was that as they'd cost me so much, I wanted to be able to see them, besides which, I kinda liked how they looked! I'll admit that they're probably twice the size of the ones I had seen on that little Lotus Super 7 looking kit car, but I liked that too! 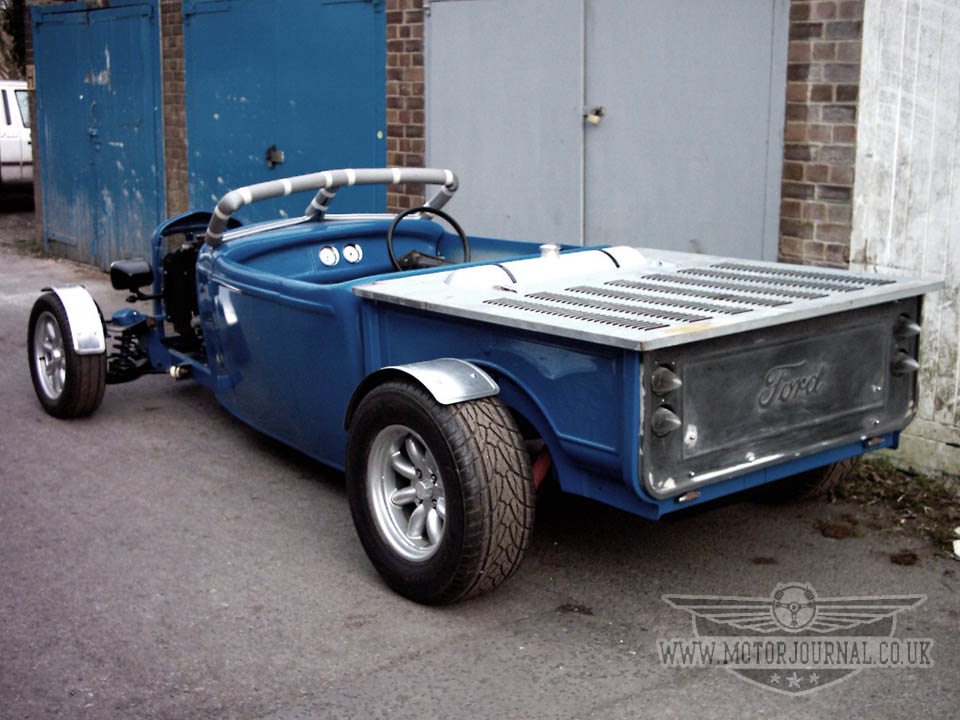 So the decision was made to keep them looking visable. I felt this was better than black because, well, the police would be able to see them as I drove past, therefore hopefully they wouldn't want to stop me for a chat! Plus, I thought that it also added to my 1960's gentlemans racer vibe that I was going for. I thought about polishing them up, but as there was no other polished metal on the thing I decided that paint was the way forward. I was tempted to paint them the same blue as the bodywork, but M.R. felt that might not look great. So in the end we decided that silver was the way forward, it would match the wheels, and it would match the windscreen frame, so that's what we did, and in all fairness, I think they turned out pretty damn good. Especially as in the first place I didn't really want them at all. But now I think it looks far better with them than without.