October 31, 2019
With the tail lights finally done, it was time to finish the back end of the Hot Rod, and do something with that tonneau that covered the bed. 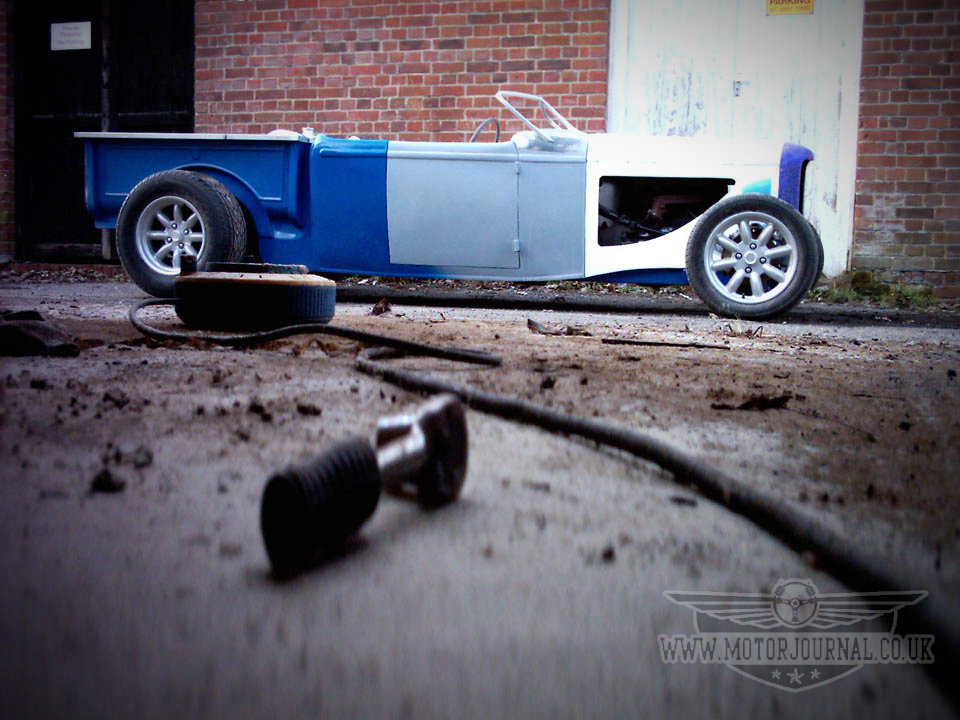 I really liked how the bed was covered, but the problem with it was that it was just too damn plain! The front portion looked OK with the fuel tank just poking out through it, but from the hinges back it was just this huge expanse of flat metal. I really wondered what I could do to break up this featureless piece of flat metal. I thought about having it painted satin black with pinstripes. Or having some sort of chrome strips running along the length of the tonneau. Or maybe just have it bead rolled. I wondered if any of these ideas would look good if it was painted body colour? I really felt lost for ideas. 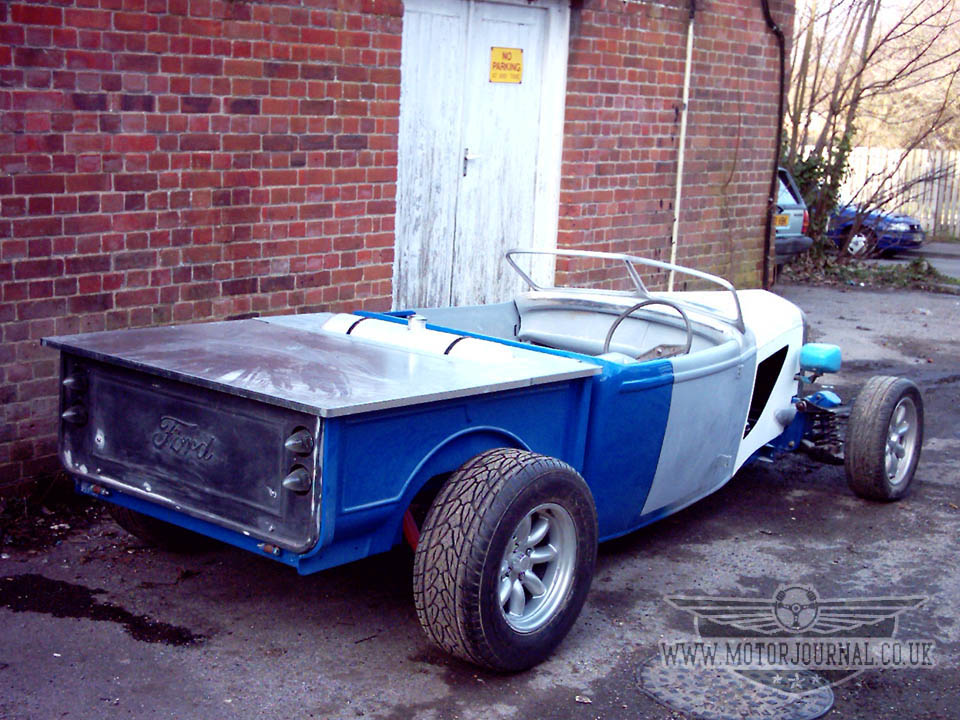 I even thought about having a big roundel with a number on it, but I felt that this wouldn't look too good unless I did the same on the doors. I thought about that for a long time but the truth was that although I sort of liked the big roundel with a racing number idea, I didn't really want them on the doors too. Besides, what number should I have? 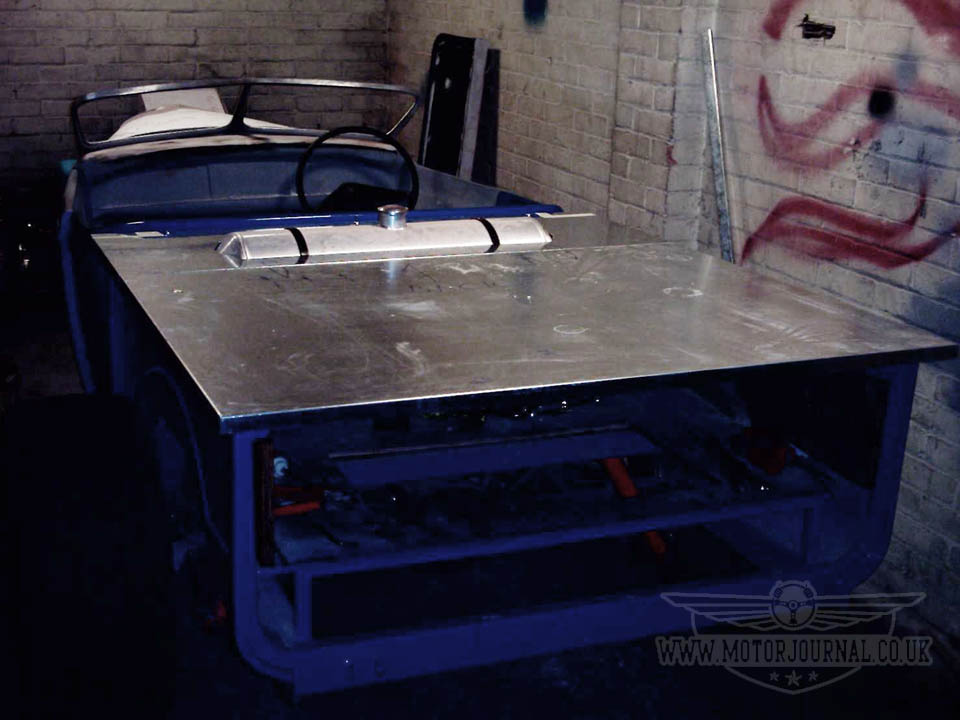 In the end, I decided that I would have several beads rolled into it, then paint it body colour! I wasn't really sold on this idea, but I was feeling that without doing something then it would just stagnate, and I would be more and more likely to just have a plain flat tonnue cover, probably painted satin black. 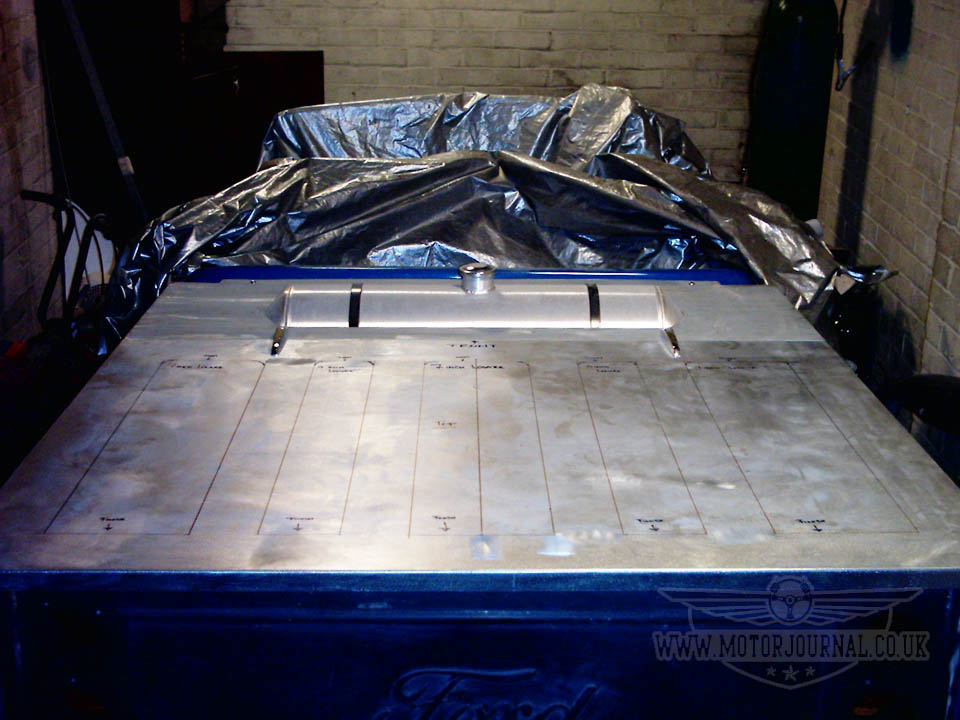 I decided how many beads I wanted rolled into the bed, and started to mark them out with a permanent marker. With the lines drawn out we stood back to look at what it would look like. After a little while M.R. asked if I'd thought about louvres? I said I had, but I'd not gone that route because it would stop the bed from being waterproof if it rained! There was a moment of silence, then M.R. said, What stops the rain coming into the cockpit? We both looked it it. I've got to admit he had a point. How often did I plan to drive it in the rain anyway? Maybe louvres were the way forward, infact, now that it had been mentioned I knew that louvres were the way forward. We got some cellulose thinners, and wiped the permanent marker off the tonnue cover, seems it wasn't as permanent as it was supposed to be!

I decided that what I would have was three rows of wide louvres with a row of louvres half the width of the wide ones inbetween. I marked it all out, took the tonnue off, and headed off to find someone to punch them into my panel. I found a local engineering shop that could do it, but the price was £100 to set up, then £2 a louvre if I cleaned them up, or £4 a louvre if they did it. I decided that I would clean up the louvres. Then they noticed that I had two different sizes of louvre marked up, so they told me if thats how I wanted it then they'd have to set up twice, and it would be £100 each time. I knew this was going to be expensive, but this was getting out of hand! I told them that maybe all the louvres should be the same size, but I would need to re-mark where I wanted them to go. The guy at the engineering shop said to just mark where I wanted the louvres to start and stop, and also the direction of the opening, then leave the rest to them. Having seen some of their restorations and re-creations I figured they knew what they were doing, and I was in pretty safe hands. I left it with them and little over a week later I returned to collect my tonnue, and lighten my bank balance! 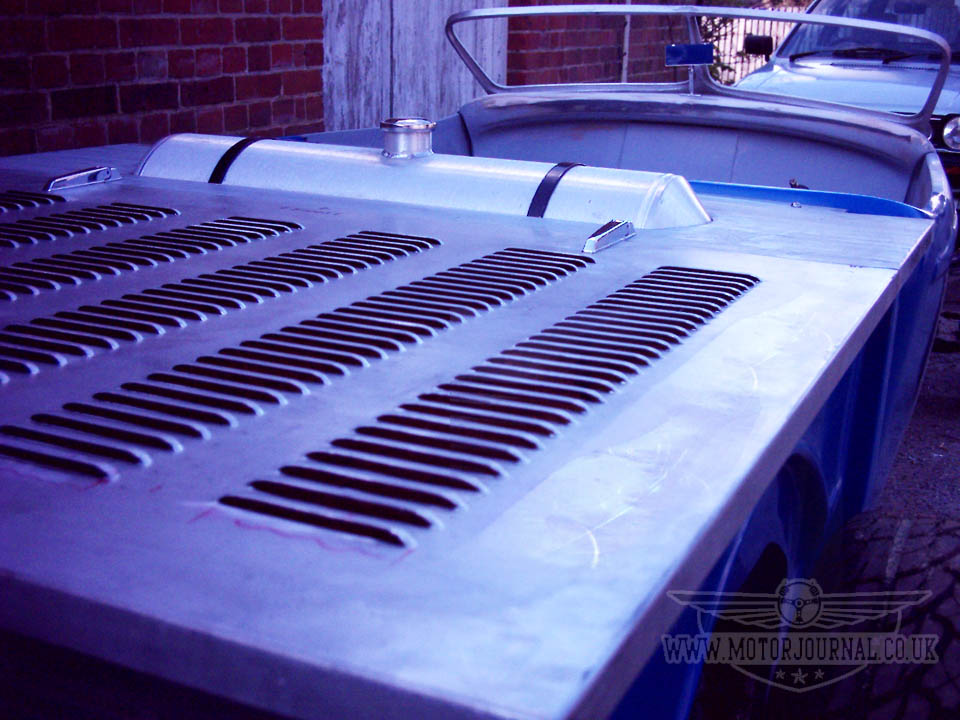 Seven rows of 29 louvres, thats 203 louvres altogether! At £2 a louvre that was £406, plus the £100 fee to set up! At £506 this surely must be the most expensive cheese grater in history, and probably the biggest! To be fair they let me off the £6! Mind you it did look bloomin' good! The thing was that each of those louvres was slightly serrated where it had been punched through, it was now my job to file each of the 203 louvres smooth! This took over a week of evenings with a needle file to get into the corners, and a flat file to do the bigger areas! I've got to say though, when I was done I was pretty happy with the result, and standing there in that cold damp garage I knew I'd made the right choice louvering that tonnue. It just screamed Hot Rod to me, and despite the huge expense of having it done and, and the monumental amount of time it took me to file them all smooth nothing else would've looked as cool as this did.