October 13, 2019
Much like the headlights, when it came to chosing the correct (for me atleast) tail lights for the HotRod what I had chosen was met with much discussion, and a fair amount of disapproval from a few of my friends. 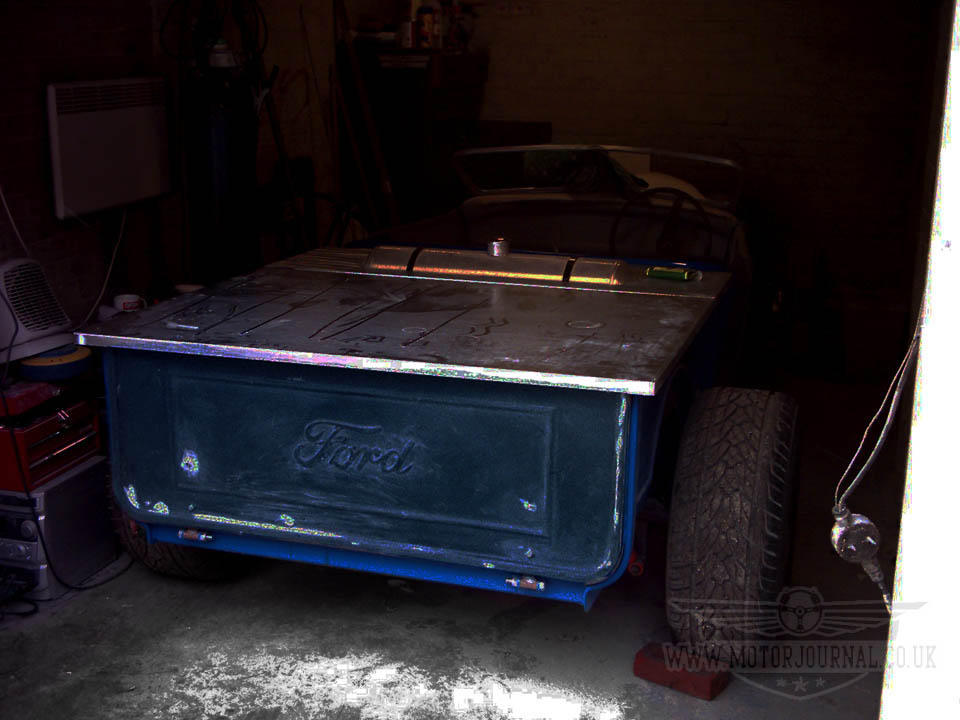 The thing was, had a I been going down the full fendered route I think it would've been easy, I would've probably just bolted some teardrop shapped tail lights to the back of the rear fender, and been done with it. But I didn't want to have fenders, so I didn't have anything to hang my tail lights from. Besides which I had dedcided that tear drop shaped tail lights were not really what an English Gentleman would fit to his HotRod if he was building one. I started to look at round tail lights, like off the back of an old Land Rover or something. I thought that they would be appropriate, and would probably look good, but again, without the fenders I didin't really have anything to hang them from. I was backwards and forwards over this, and in the end I actually bought a set of rear fenders to put on it, just so that I could have somewhere to hang the tail lights! The problem with this was that I just didn't like how it looked with its rear fenders, and open front wheels. I considered putting full running boards and front fenders on it, and to this day I still think it would've looked cool like that, but I still think I wanted open wheels. In my mind I felt that having open wheels was a bit more Hot-Roddy, if thats even a word! No, it had to be open wheeled, and I'd have to find some sort of other lights to use. Then, at an autojumble, I stumbled across the perfect pair... 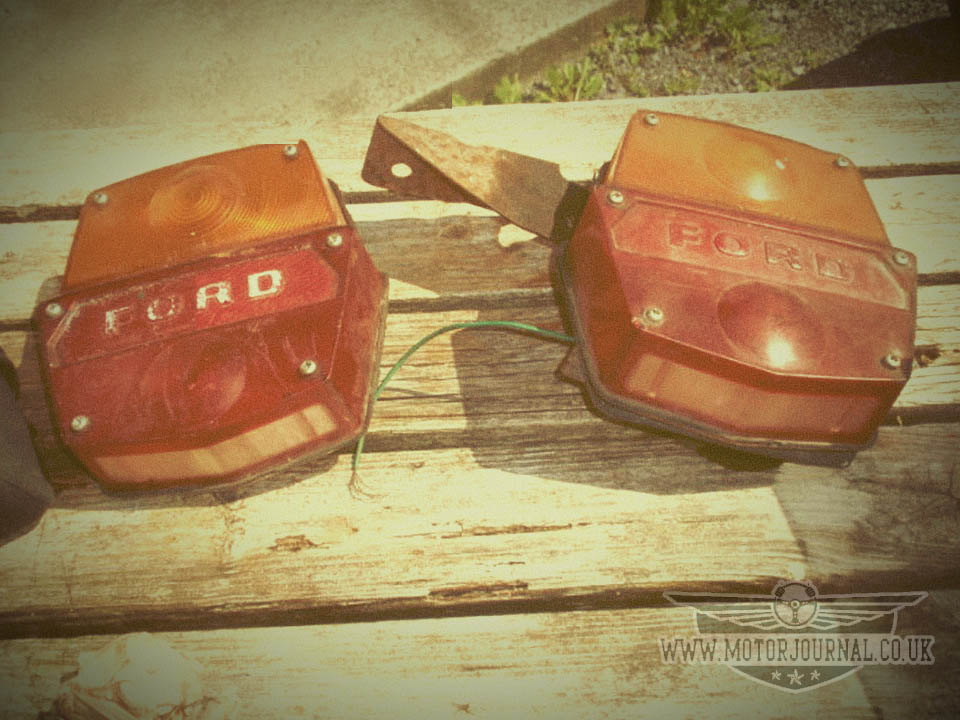 Tail lights from a late sixties Ford D-series light truck. These were ideal in my mind, I liked the shape, they were the right sort of era that I was trying to build my HotRod into looking, and they even had 'FORD' molded into the lenses. I thought that they couldn't be more perfect if they'd have tried! I took them home with the idea of having them out on little outriggers projecting out from the side of the chassis behind the rear wheels. M.R. and I looked at them and held them in place, they looked good, and as I was a pipe-fitter at the time I had access to plenty of steel pipe to make the outriggers from. I bought some pipe home and we fabricated an outrigger. It looked good, well from the back of the HotRod at least, but from the side it looked rubbish. The problem was that the back of the tail light assembly looked awful. I guess that on the D-series truck you couldn't see it, but on my HotRod it was on show for all the world to see, and I didn't like it. We thought about making some sort of boxing to hide it all in, but this would've taken us forever to weld up a box that mimicked the shape of the tail light lenses, and to make matters worse it would've just look too damn bulky hanging out there in the breeze behind the rear wheels. I thought about mounting them below the tailgate, and this looked OK, but they were a bit too low to the ground for my liking then. So the final idea was to mount them on the tailgate its self. The problem with that was that to do this I needed to move the swage line around the Ford script in a bit, to give me enough flat space to mount the tail lights. We thought it was do-able, but holding them in posistion they just looked too damn big!

Back to the drawing board! M.R. suggested that I used the Land Rover tailights, sunken into the tailgate either side of the swage line around the Ford script. With my patience, and ideas running out I decided that it was probably going to be the best option. 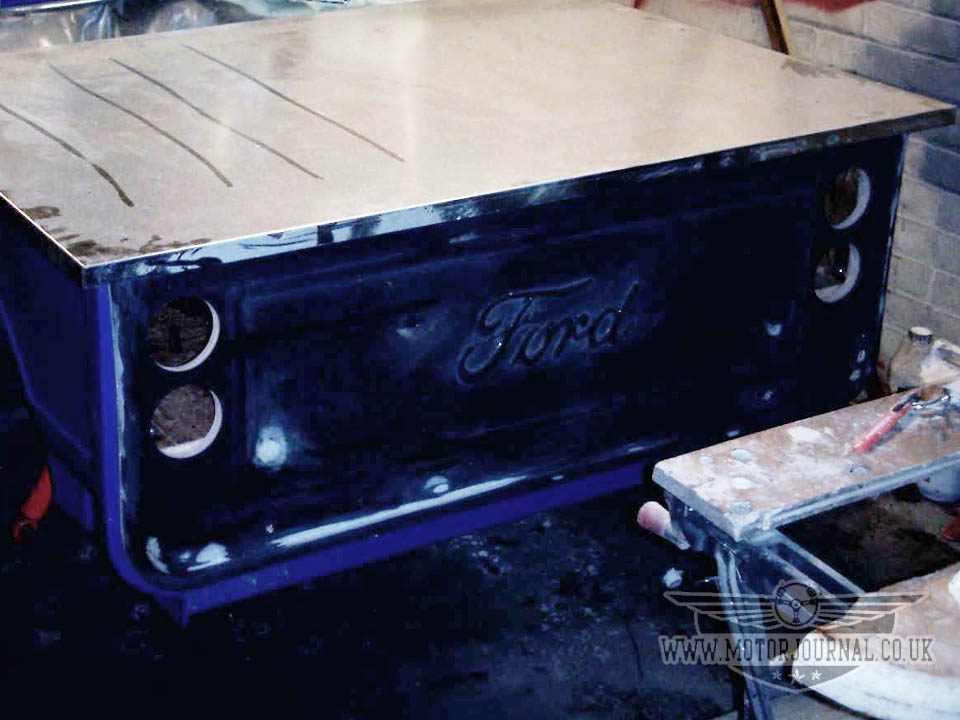 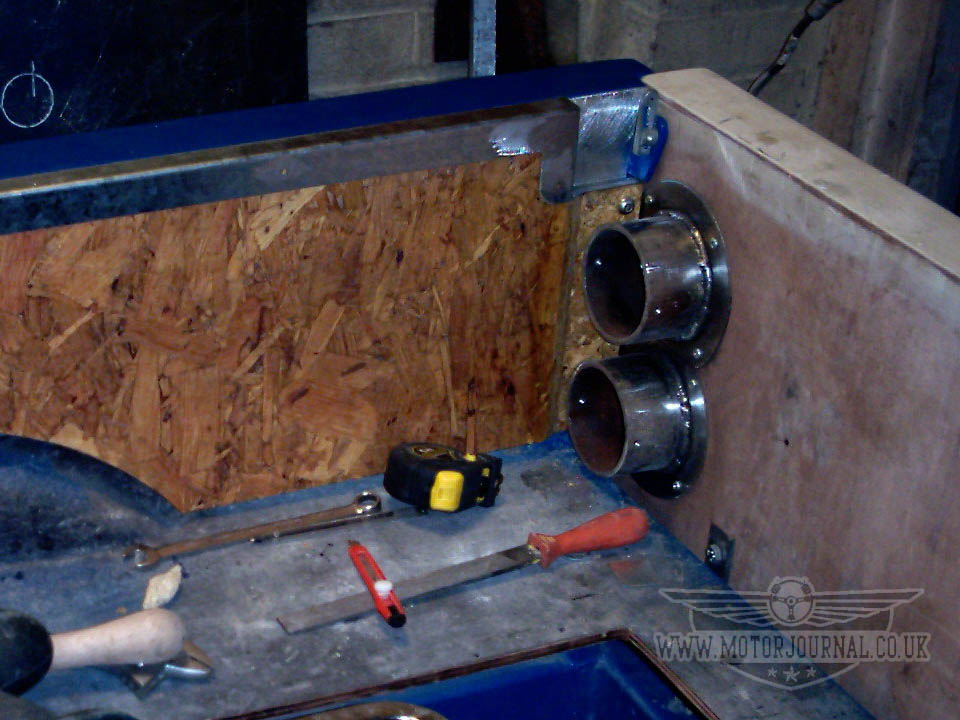 The idea was that the Land Rover tail lights would be sunken, or frenched into the tail gate. The name Frenching originates from the end result looking like a French cuff of a shirt sleeve, which has a ridge at the end, and is the act of recessing a headlight, taillight, antenna or even a number plate into a car body to give it a smoother look.  This is also known as tunnelling, and as it was a common modification used on leadsleds and customs since the 1930s I figured that it was probably in period enough to use on my HotRod, even though as I said, it was more of a custom thing!

With the pods for the tail lights fabricated I dropped the Land Rover tail lights in. Man alive they seemed a long way in, from the side you couldn't see them at all. I was a bit unsure about this, everybody thought it looked cool, and it did, but I felt they were just too far in. I moved the lenses until they just poked outside the pods a little bit, and I sort of liked it, but it didn't look as good as I hoped. The problem was that they were just not quite the right shape to look how I had them looking in my minds eye. In the end I thought nevermind, they'll probably grow on me, and left them buried deep in the tail light pods. They looked OK to be fair, and it did solve the problem of where the tail lights would go, and what they should look like. I thought it was a bit more function over form to be honest, but I comforted myself by thinking that HotRods should be function over form anyway, and besides, if it was more about the form I should've been building a custom, and that would've had full fenders for sure! 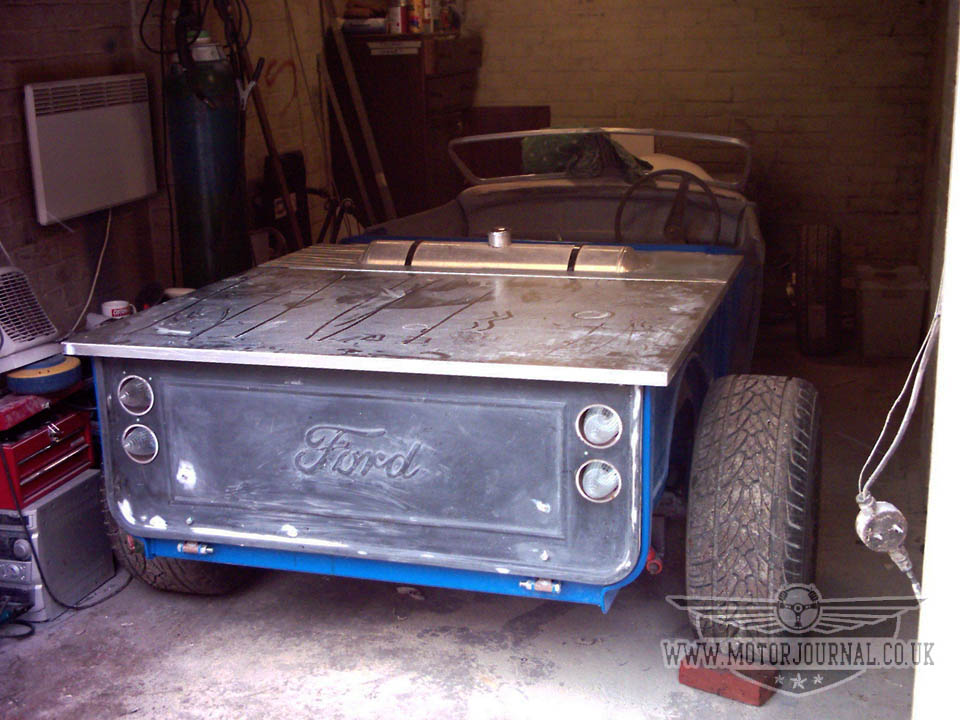 Despite this I did keep an eye out for other tail lights that might work, but they had to now work in the enviroment that the Land Rover lights were in. I wasn't changing the location, or the pods. There was just too much work invested there to go back over it and do it again! Then at a show it suddenly hit me, the tail lights I should be using were right infront of me... 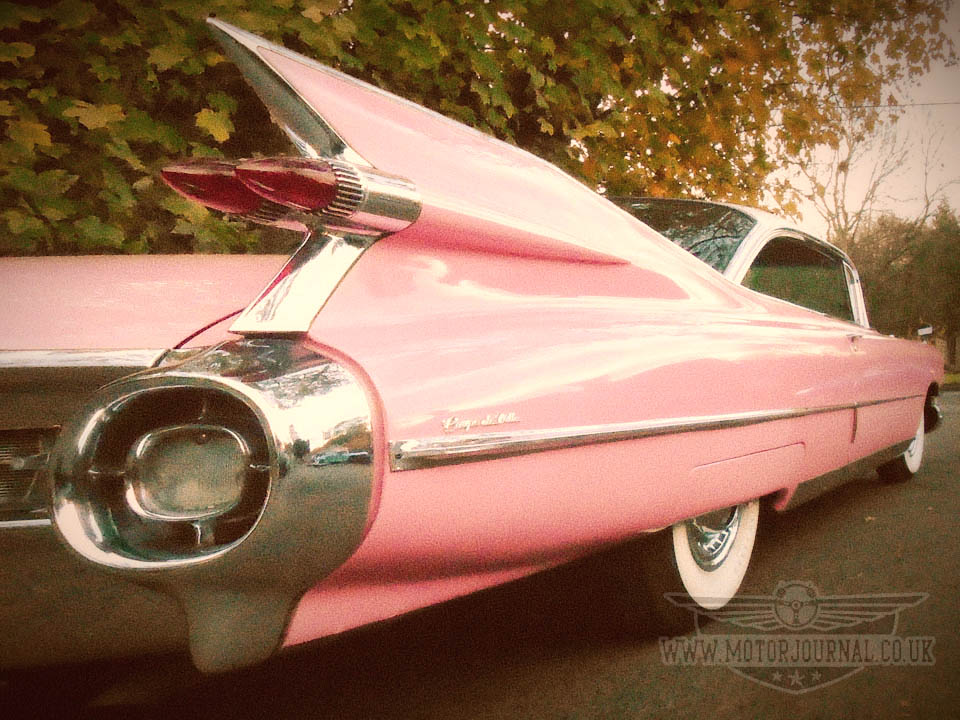 Poking out of the back of a 1959 Cadillac! The trouble was, where was I going to find four 1959 Cadillac tail lights, and what was the MOT inspector going to say about me having red indicators? I spoke to several Cadillac owners trying to find out if they knew where I could get some, and I was pointed to the Mooneyes parts catalogue. I picked up a catalogue from a vendor at a show, and pretty soon found that not only could they supply me with red 1959 Cadillac tail lights, but they also did amber ones and clear ones too!

Being inspired (wrongly) by the cars appearing in Max Bygraves magazine with their clear tail lights, I bought the clear ones. I knew this was wrong when I did it, and as ever, most of my friends said this was wrong. But I felt that with red and amber bulbs in them they're probably look OK. The tail lights arrived a few weeks later, and I mocked them up... 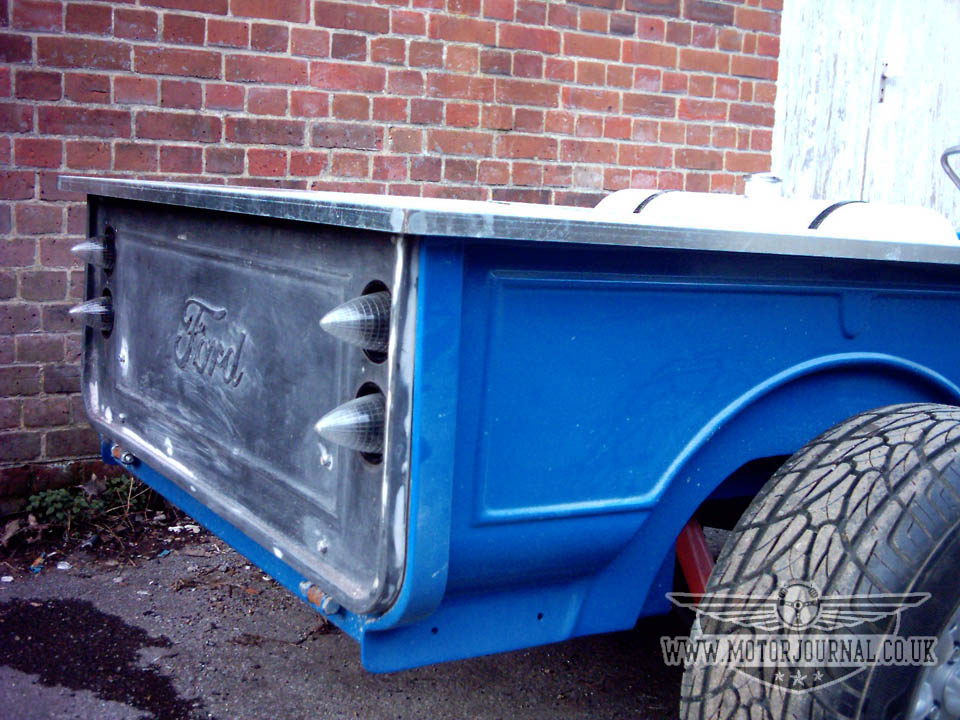 They looked good! well, to me atleast! I liked that I had gone for the clear lenses, I knew they weren't period correct, but they worked for me. I also liked how much they poked out of the tailgate, despite the colour being wrong this was the look that I pictured in my minds eye! But better still, the Land Rover tail light lenses fitted inside the Cadillac lenses! In the end, I glued the Land Rover lenses into the Cadillac lenses and this became my complete tail light set up. I was pretty pleased with how it looked, and thought they looked a bit like the back of a jet fighter with it's afterburners going! M.R. thought I needed to lay off the cellulose thinners a bit, but agreed that despite thinking I'd made a mistake ordering clear '59 Cadillac tail lights, they looked pretty damn good to him as well!