September 23, 2019
With the grille shell, lights, bonnet, and sides back all coming together I was pretty happy with how it was looking, and although still not 100% sold on the bonnet sides I thought that atleast they didn't look out of place. 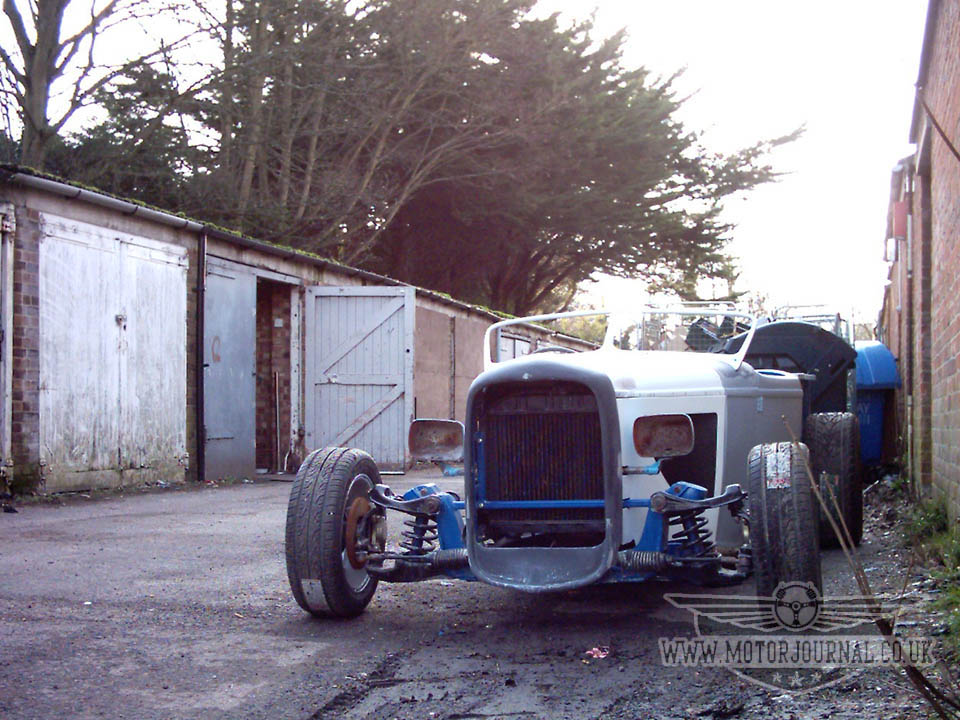 Now I just needed to create some sort of grille to fit in the shell, and then we could think about painting the front. I was pretty happy with how it was going, and actually just sorting out how the front was going to look gave me quite a boost. 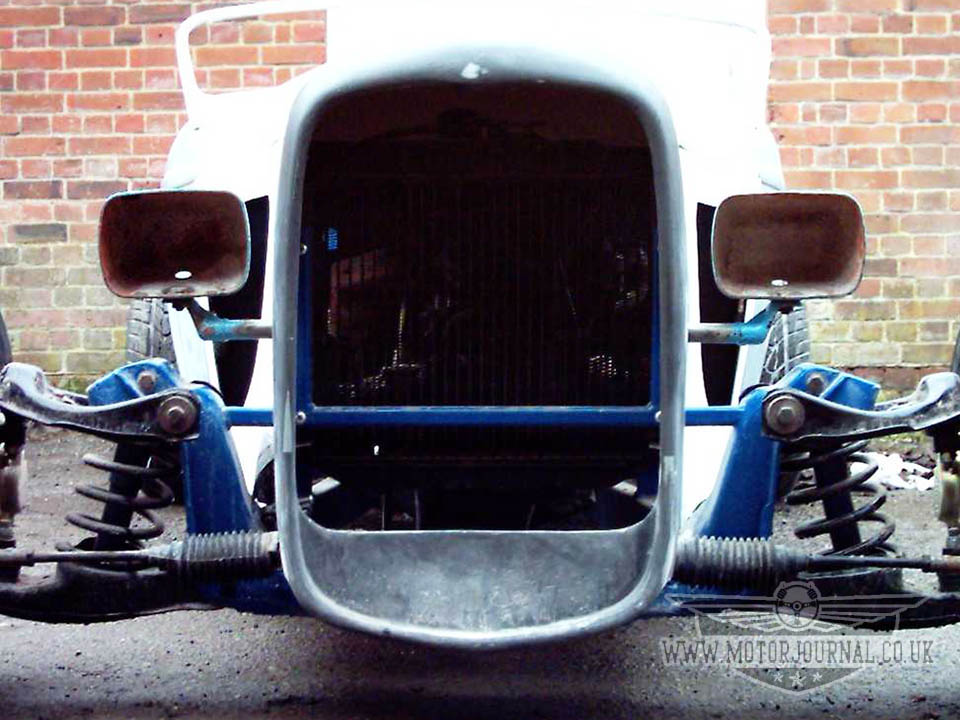 Although the rectangular Citroën 2CV lights were my idea, and I was quite happy with them, I still couldn't escape from the thoughts that what I had originally wanted would've looked far better. 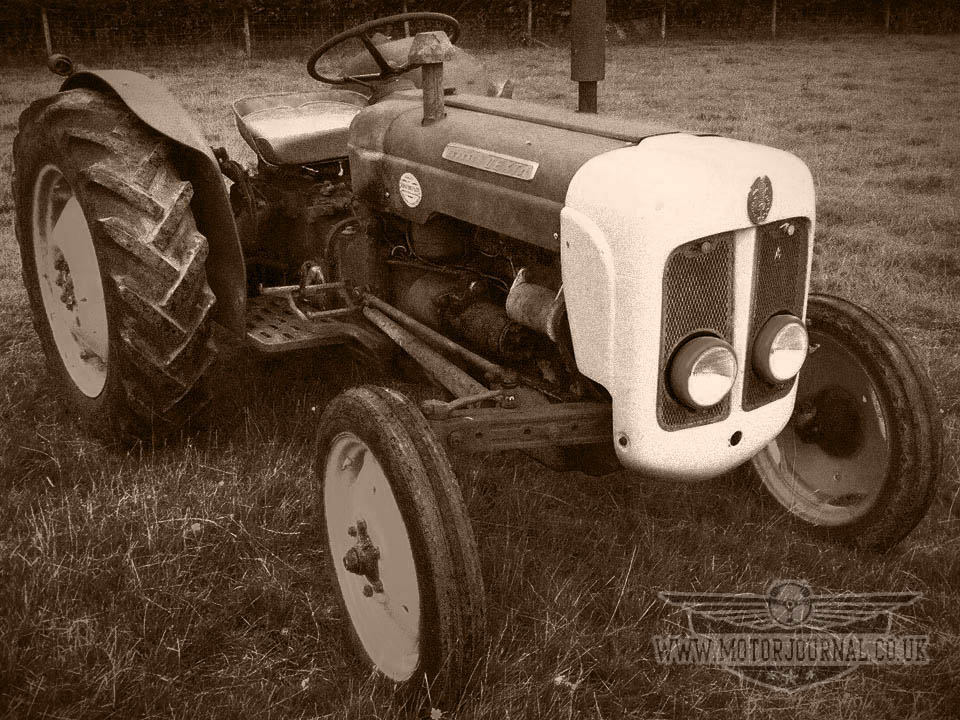 My original plan called for the headlights to be mounted inside the grille shell, like an old Fordson tractor. The problem with doing this was that I would need to be running some sort of marker light at the edges of the Hot Rod, and this in my mind would look odd. I talked about this at great length with my friends and from these discussions came several ways forward. I could either, build the grille shell with the 5" round headlights built in much like the Forson tractor, and have the rectangular Citroën 2CV lights fitted for MOT purposes only, then take them off once I had an MOT, and re-fit them once the next one was due. I could see the appeal to this, and the general opinion was that I probably wouldn't get pulled over very often. But in my mind this seemed far too much faff, and I really couldn't be bothered with putting them on only to take them back off again. Besides, I knew where I lived there was atleast one traffic officer who knew the words of the law to the letter, and, worse than that he was the one that ususally stopped me for a chat. Although he was a decent enough chap I felt that pulling me multiple times for my lights not being in the right place would probably get old with him really quick! So I decided that was a non starter really. If I was going to build this thing I wanted to build it so I wasn't getting pulled over all the time. The next idea was that I should build it with the Citroën 2CV headlights where they should be, and have 5" round driving lights in the grille which would come on with the high beam. But again, this didn't really appeal to me because I thought that firstly it would look like an odd mix of round and rectangular headlights. But also, I thought that it would make the front end look too cluttered, with too many lights, so this idea was also shelved! The final idea was that I should build the split grille, but just not have any lights in it at all. Although I wasn't thrilled with this idea either, but I was convinced to atleast give it a go. 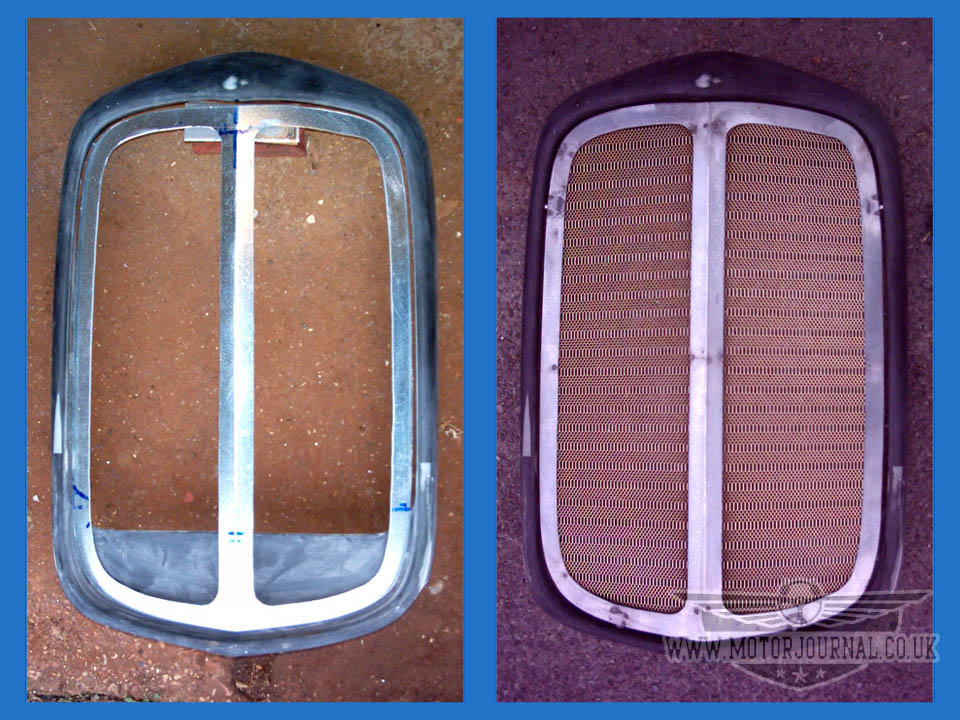 A sheet of flat metal was acquired, and a fold was put into it to try and follow the angles of the grille shell. Then after much marking up with masking tape and a Sharpie I gingerly cut away at it with my jigsaw. After much trimming I had a shape that echoed the inside of the grille shell, and was ready to start to cut out the two holes that would emulate the grille of the Forson tractor, but without the headlights! 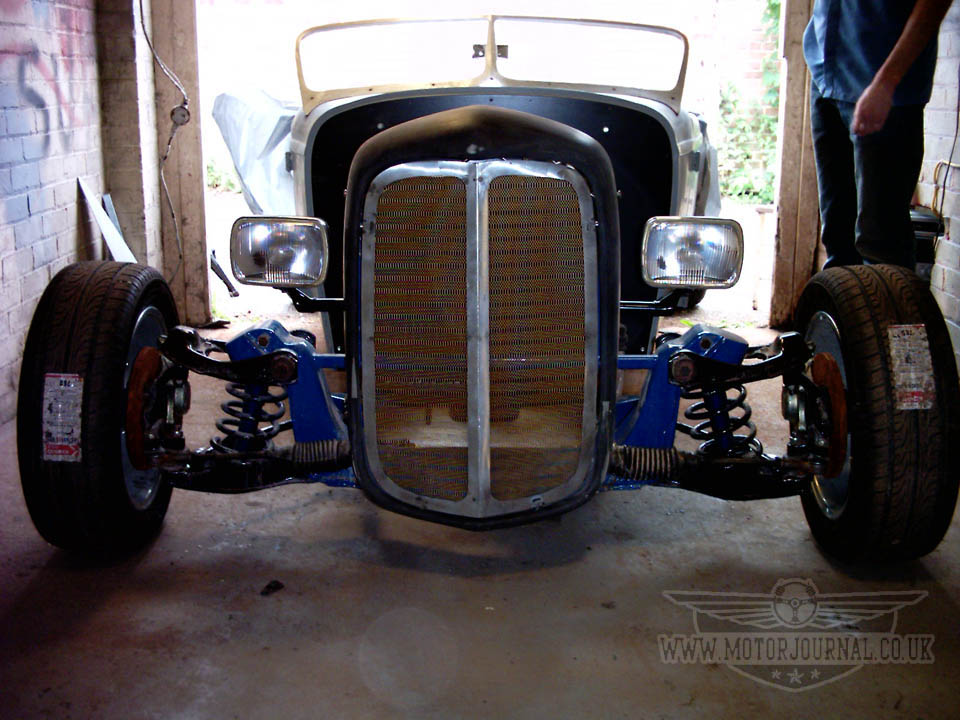 We put it all together, and put it on the front of the Hot Rod to see how it looked. I thought it looked good, actually, I thought it looked much better than I imagined it would look. Infact, I even commented about how it probably looks better than it would've ever looked had we used the 5" round headlights in the grille rather than the rectangular Citroën 2CV headlights hanging out in the breeze either side of it! There was still some debate amoungst my friends about my use of the rectangular lights, but standing there looking at it all together with the grille I was pretty much sold on how it all looked now. After making sure I was happy with the result M.R. said he would take the grille into work and paint it for me. 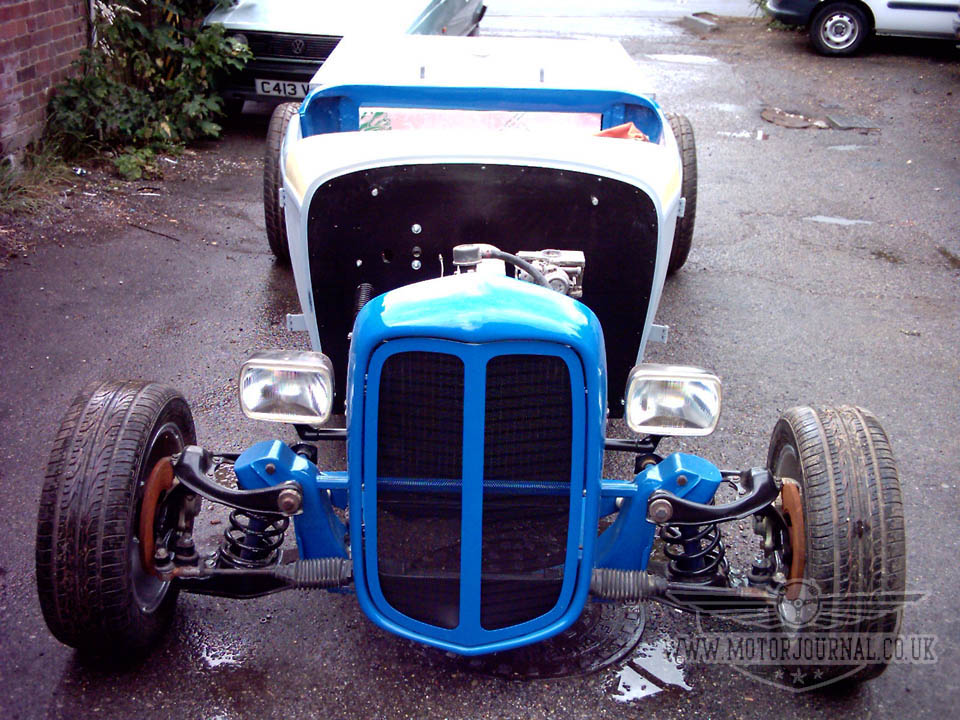 A couple of days later and the grille was back, M.R. had dismantled it all, painted the mesh black, the bottom of the inner part of the grille shell matte black, and coated the rest in Fiat Blue Sprint. He then carefully re-assembled it all, and we put it back on the front of the Hot Rod. I was pretty chuffed with how it was all looking. I realised that it was still far from being completed, but it was getting closer to looking like a finished car. What I didn't realise was although it was starting to look like a finished car just how far we were from it being a completed car it really was, we were still a long, long way from the end of it all!