August 11, 2019
With the bed, and everything that is either in it, or attached to it all starting to take shape the next thing I wanted to do was line the bed with something. 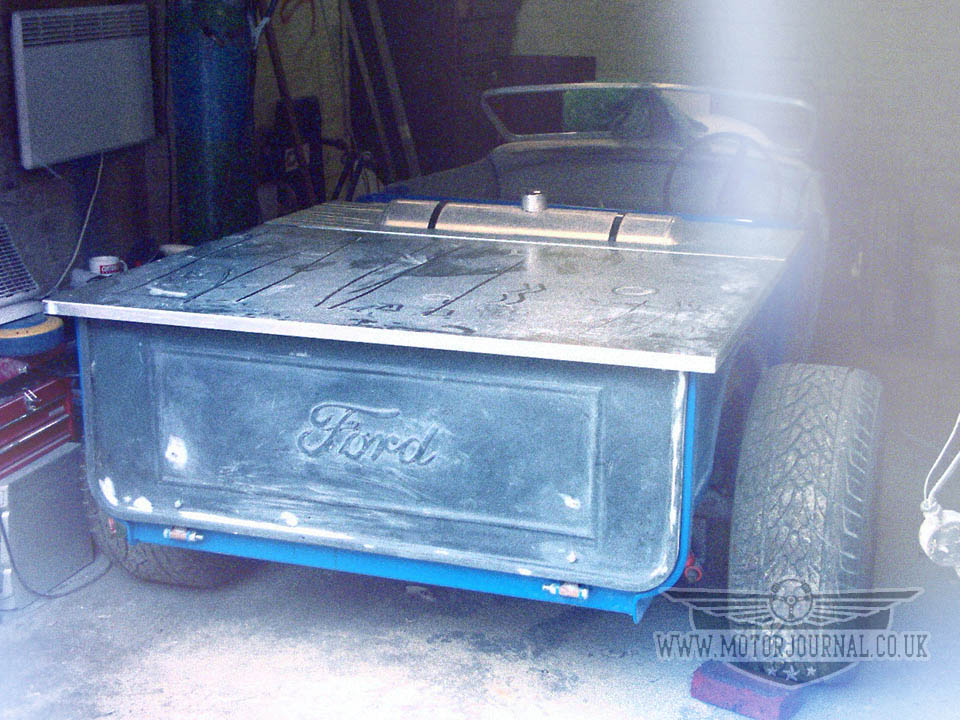 Being covered anyway I did think about just leaving it, or perhaps glueing some carpet inside to make it less pick up like, and more boot like. But the more I thought about it, the less I liked the idea of carpet. I figured, that no matter how hard I tried to keep it dry, without any doubt if it was lined with carpet, it would get wet! To that end I thought about rubber lining it, but the truth be told I didn't know anyone who I could scrounge a massive sheet of rubber from for free, so that idea was also out the window. On the building sites I was working on there was quite a few sheets of shuttering ply wood, and I thought that would probably be good, until I looked through the pile and decided that it was pretty rough, and really didn't look all that great after all. Then, one of my friends who at the time was a banger racer, offered me the deck from a 1959 Cadillac hearse he was going to be banger racing! I went to look at it. Make no mistake, it was in nice shape, dark Canadian maple, with chrome strips. It was pretty fancy. But I felt a bit weird about using part of a stiff-shifter in my little HotRod. After giving it a lot of thought I turned him down. But I felt that it should be wood of some description though, and after initaially dismissing the plywood idea I noticed a rather large stack of Sterling board on site! 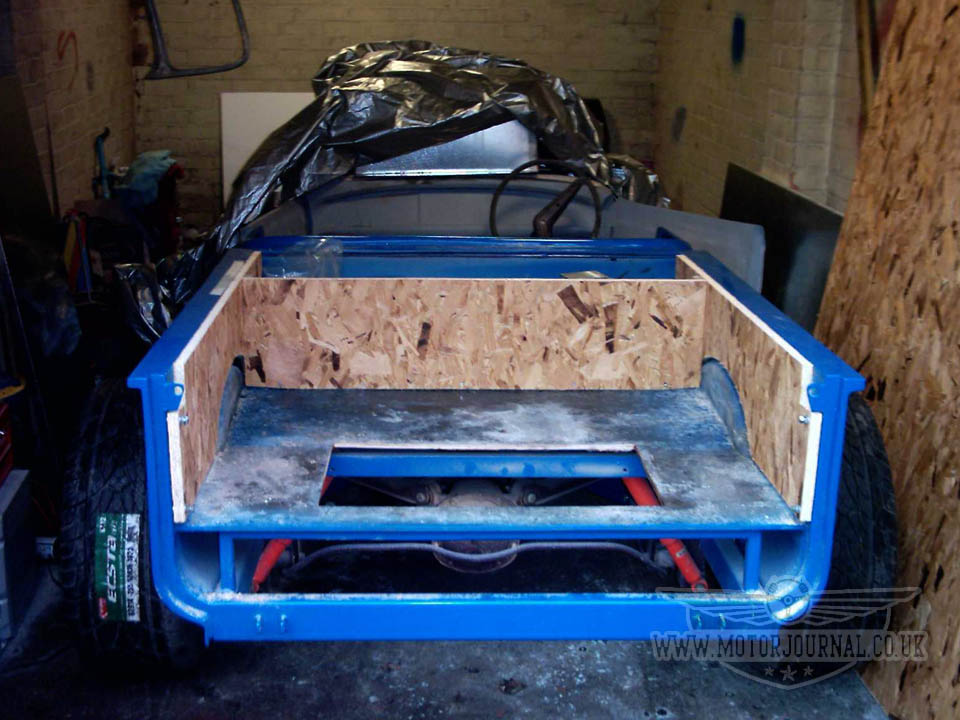 Sterling board is weird stuff, but I really quite like it, I like the random pattern of the large wood chips, but, it isn't very smooth, it definately got a texture. I figured that if I was going to use this stuff, then it was going to take some work to make it look anything. 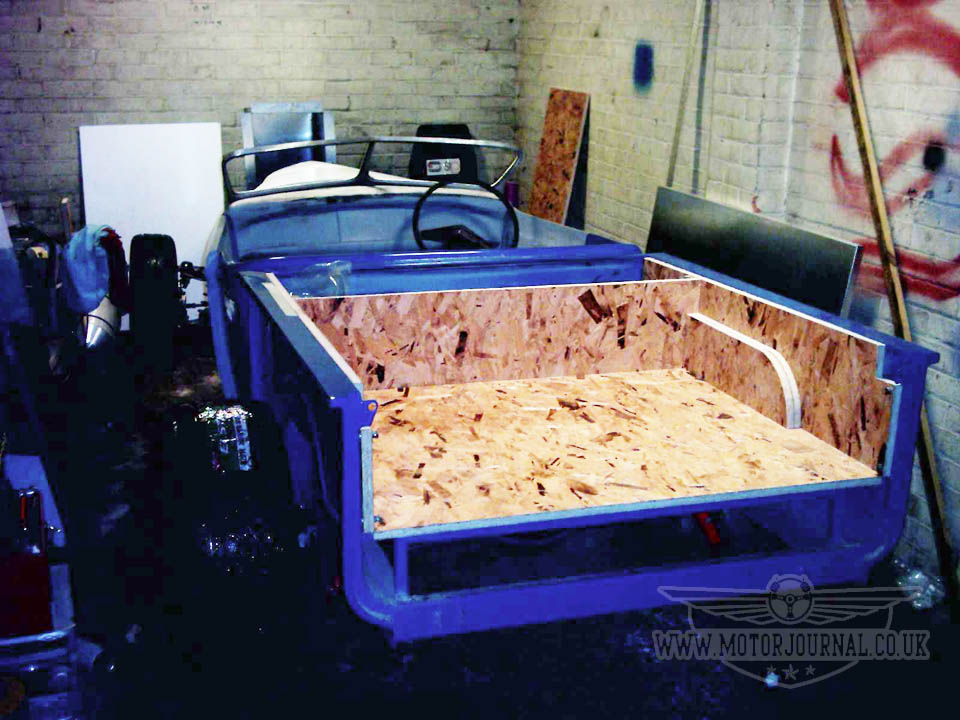 An 8x4 sheet was tied to the roof of my van, and liberated from the site I was working on. I wasn't really sure if I could make it look anything, but as the price of the stuff was right (free) I thought I probably didn't have too much to lose! I took it back to my garage, and preceeded to chop it into bits to line the inside of my little trucks bed. After a little while I had the bed lined in Sterling board, it looked pretty good to the eye, but it felt pretty rough to the hand. I went over the whole thing with my power sander, and although it felt a little smoother when I was done, it still wasn't smooth enough. Not even close! 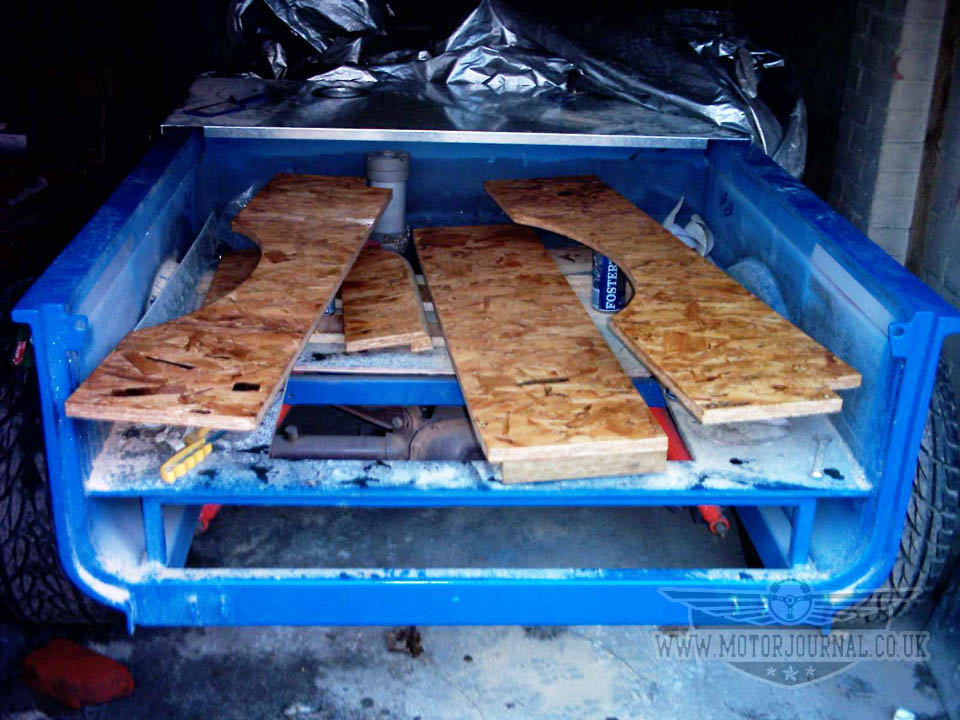 I decided that what I needed to do was to take it all apart, and varnish the lot of it, both on the sides that would be seen, and the sides that would be against the body of the pick up bed. The reason for this was that I felt that unless it was completely sealed in varnish, the stearling board would probably still get damp, and then start to come apart. I went out and purchased a litre of some half decent yacht varnish, and for the next week or so I brushed it on to both sides of the Sterling board until I used that whole litre up. I let it sit for a while to fully cure, then once I felt it was cured I carefully sanded the faces of the Sterling board that would be seen in the bed to try and make it just that little bit smoother. 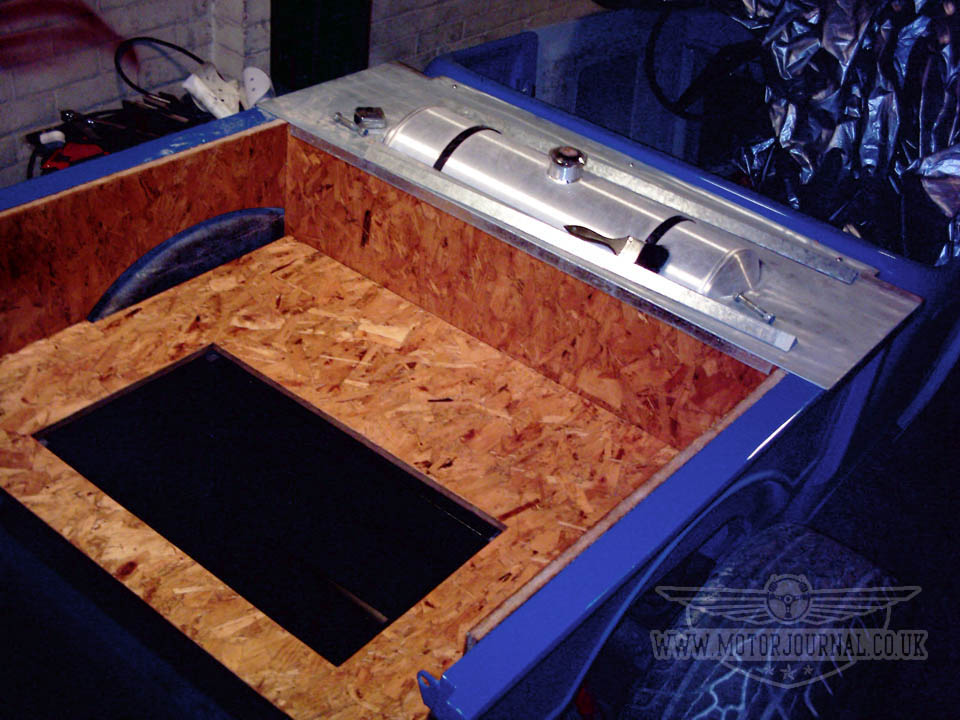 With that done I screwed the battery box into the bed, and then stuck the floor and sides of Sterling board into position. Once the Gripfill had dried I brushed on another litre of yacht varnish onto the insides of the bed, the battery box cover, and the wheel arch covers that were still on the bench. I figured that by brushing it on now it was all together it would help to seal the joints where the bed floor, and sides meet. This took another couple of weeks or so before it was done, and once it had fully cured I rubbed it all down carefully in the hope that it would make the Sterling board smoother still. 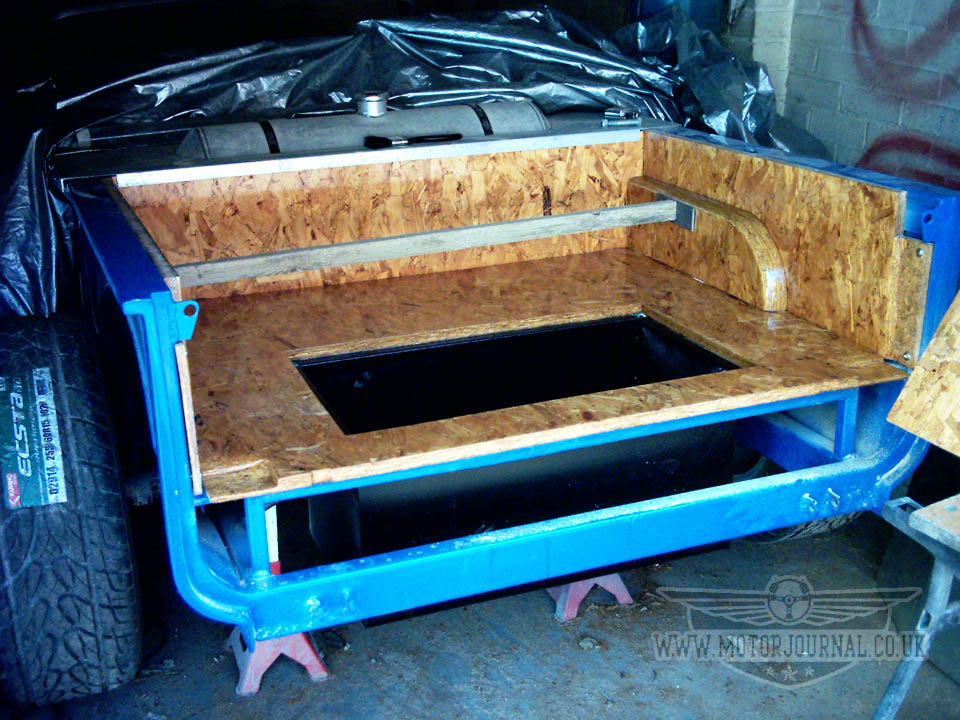 Once it was sanded, I gave it a good wipe out with panel wipe, and bonded the wheel arch covers into position with Gripfill. I wedged them in place, and left it to dry before applying yet another litre of yacht varnish to the whole bed, and battery box cover that was still on the bench! This seemed to take forever and a day to do, but before long I was thinking that I probably only had enough left in the tin to coat the whole bed once more. I let it go off for a good couple of weeks before carefully, sanding it all down again. I gave it a couple of passes over with 400 grit, before working my way slowly and carefully down to 1600 grit sandpaper. If I wasn't already bored of sanding before I started lining the bed, I was pretty much bored of sanding when I finished. But in my minds eye that bed would be as smooth as glass when I was done, and look amazing. After what seemed like forever, it was ready for a good wipe over with panel wipe, and would you believe the final coat of yacht varnish! 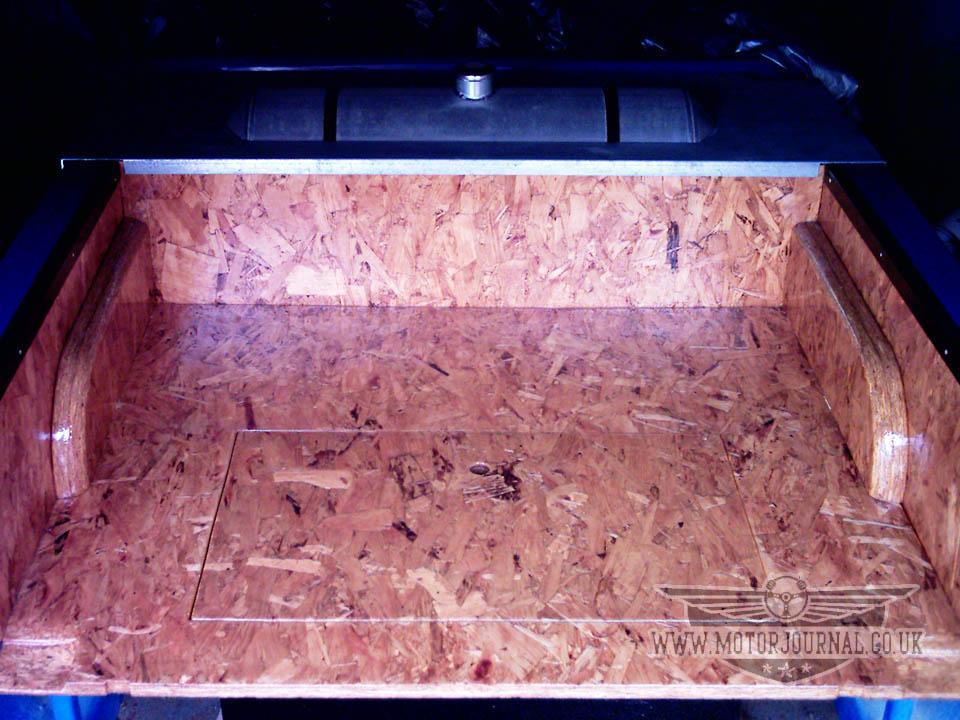 Despite the massive amount of work that went into varnishing the bed it didn't turn out to be glass smooth, it was pretty good, but still definately has a texture to it. I was initially a bit dissappointed with this, as I really thought with three litres of yacht varnish on it, and hour after hour of sanding it down between coats it would be glass smooth. My fingerprints were smooth, but unfortunately the bed was nowhere close. I stood there looking at it, wondering if I should go and buy yet another litre of yacht varnish, and another roll of sandpaper! I asked M.R. to look at it, to see what he thought, he said that it was pretty good in his eyes, and reminded me that it would have a tonneau cover on it anyway, how often would I be looking at it? Putting it like that I started to think that actually, it was pretty nice, and frankly it had taken me too long to do already. It really was time to finish the tonneau cover, work out where we were going to put the tail lights, and call the back end of the Hot Rod done!