June 25, 2019
Pushing the Hot Rod back into the garage one night I realised that actually, I had a problem. Well, not me personally, but my Hot Rod had a problem. 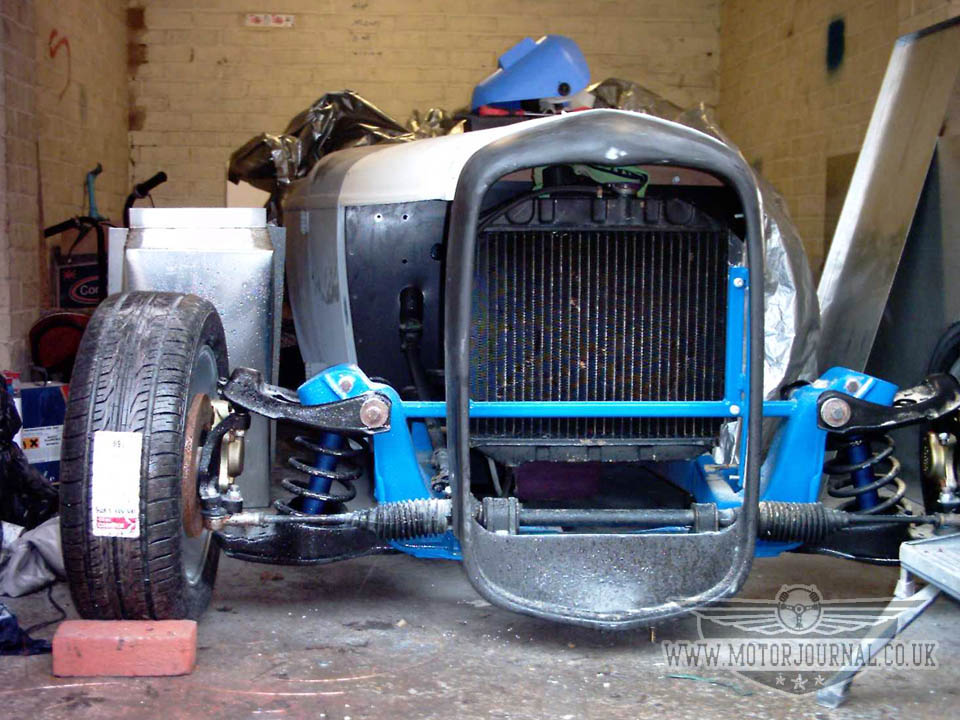 The problem was that the grille was now awfully close to the ground. There were several reasons for this. Firstly, I had fitted lowered springs to the chassis in order to get it a little lower to the ground. Secondly, the body that was originallly fitted to this chassis was sitting on top of the chassis. The Hot Rod body was also channelled so that is to say that the body was draped over the chassis, making it appear lower, in short, it was lower than your Grans tits! As cool as this looks, when I realised that I couldn't get the toe of my Converse All Star under the grille I knew that as soon as I took it out on the street I would be smashing the grille into the road at every bump. That would mean more bodywork either now, or on a weekly basis later. I briefly toyed with the idea of a little more suspension travel, but that was pretty quickly ruled out because it looked so cool being low. After procrastinating for a while I knew that there really would only be one way forward. Have a quick measure up, remove the grille, chop the required amount out of it, glue it back together, and put it back on. Simple! 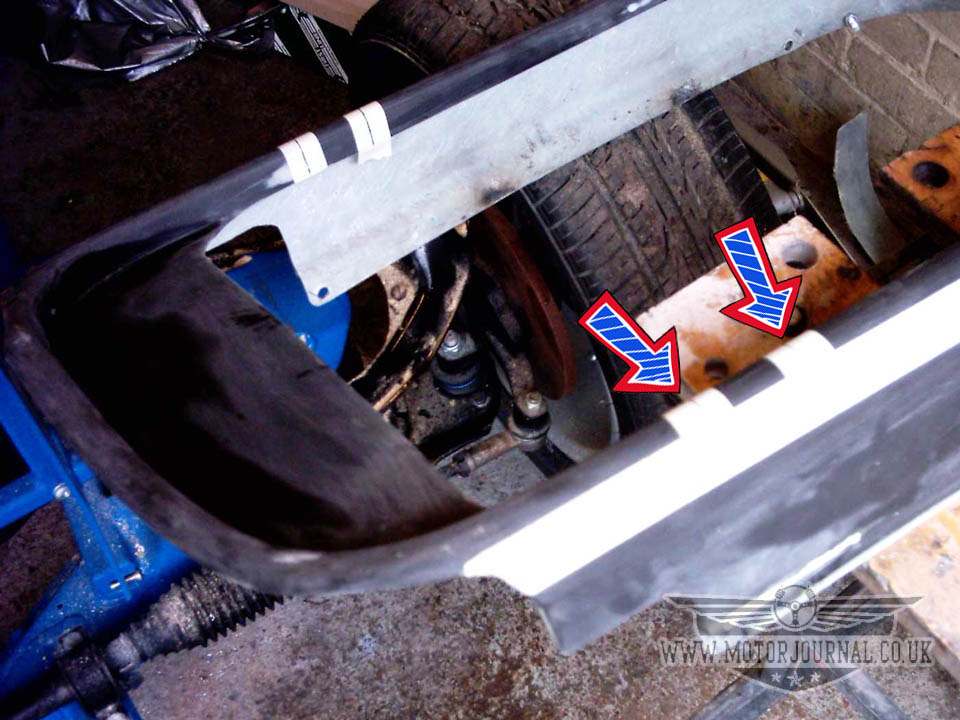 Out came the tape measure, and it was decided that just under three inches would be the correct amount to remove. It was also decided that for strength we wouldn't just chop through the grille and glue it back together, we'd cut a step in it, then slide the front part of the grille up, leaving the sides to be re-shaped after the fibreglass had set. 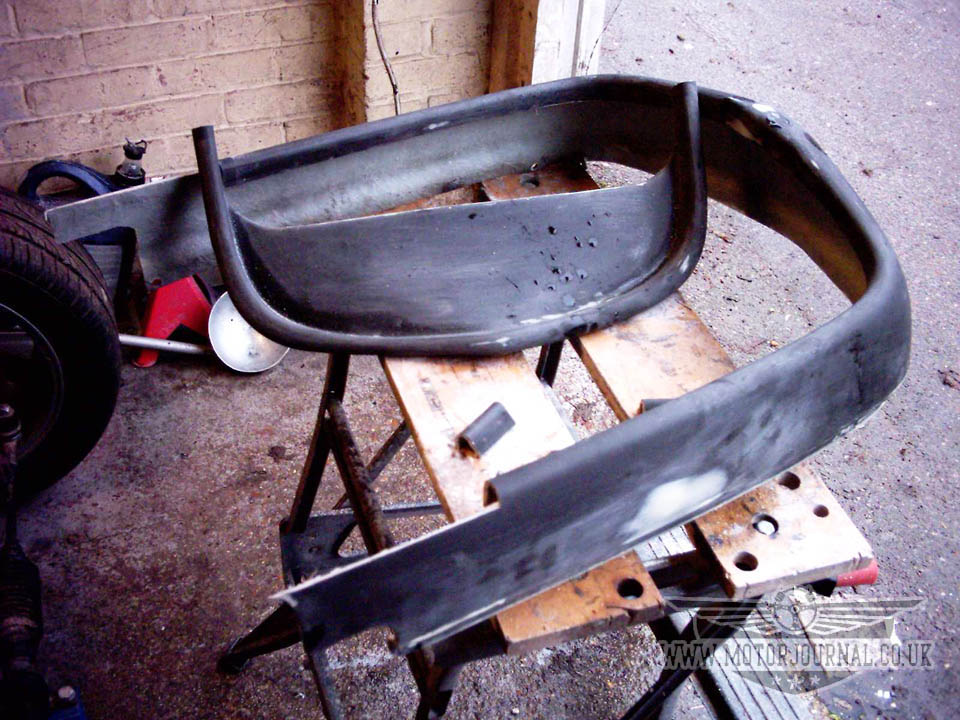 Once the grille shell was in two pieces I tried the bits together in their new location, and all looked good to me... 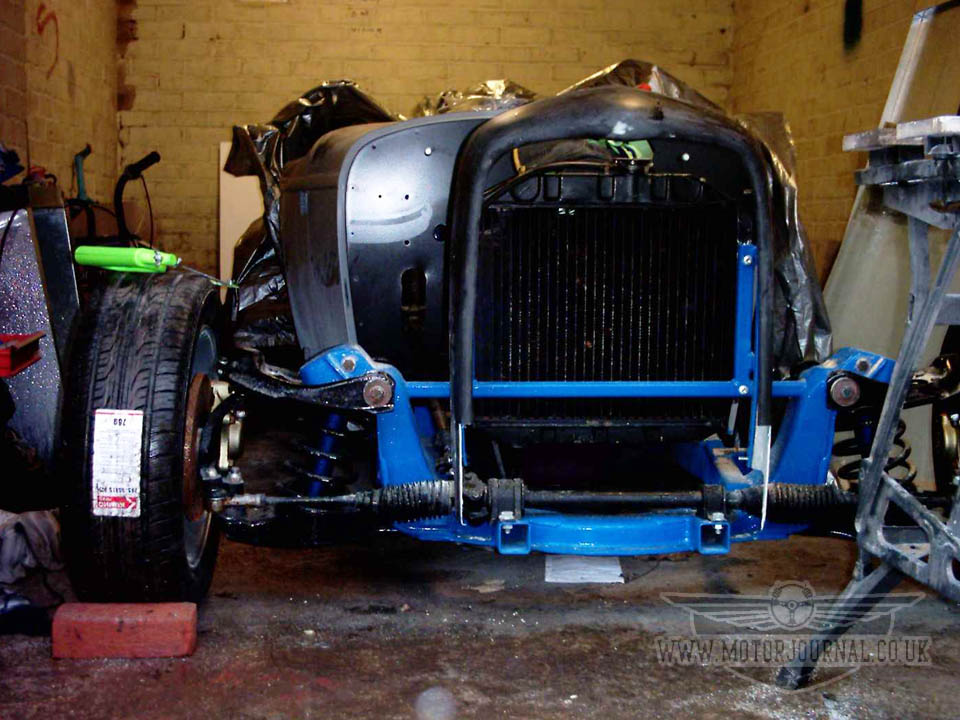 M.R. thought that before we spent time bonding it all together with fibreglass matt it probably wouldn't be a bad idea to bolt it all back on the Hot Rod and eye it all up... 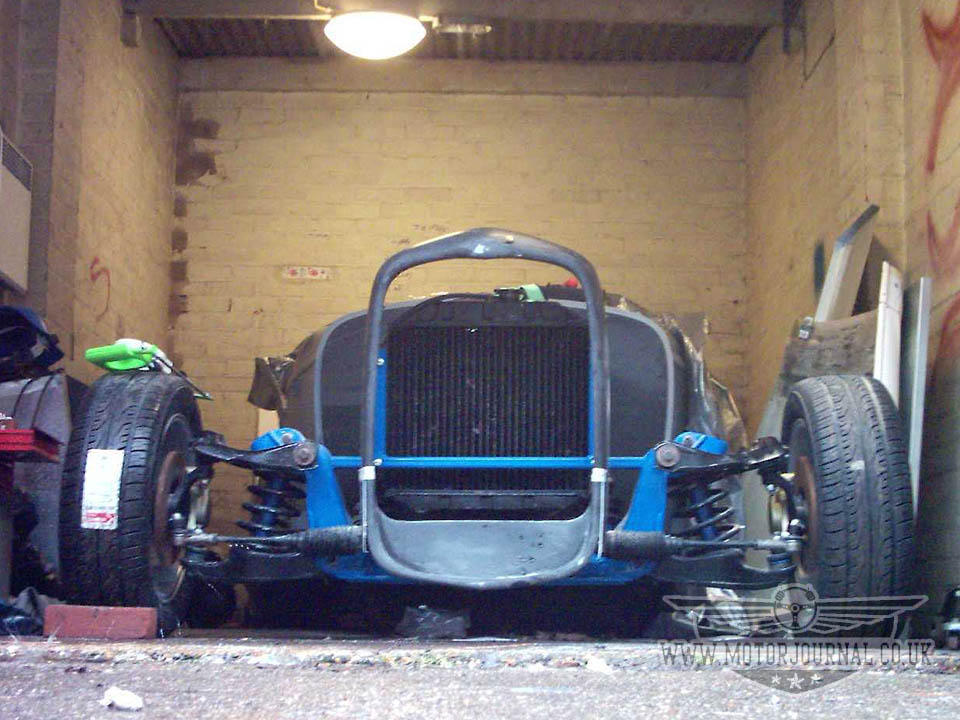 On it all went, then I stuck the lower part of the grille shell on with masking tape, and proceeded to try the all important Converse All Star test! Success, my size nines slipped all the way under until my leg touched the bottom of the grille! I doubted that I'd be beating the bottom of my grille shell off on a weekly basis now! I took it all back off and started to rough up the back of the grille shell so that the epoxy resin would haver a good key to help it to bond the fibreglass strand matt to. 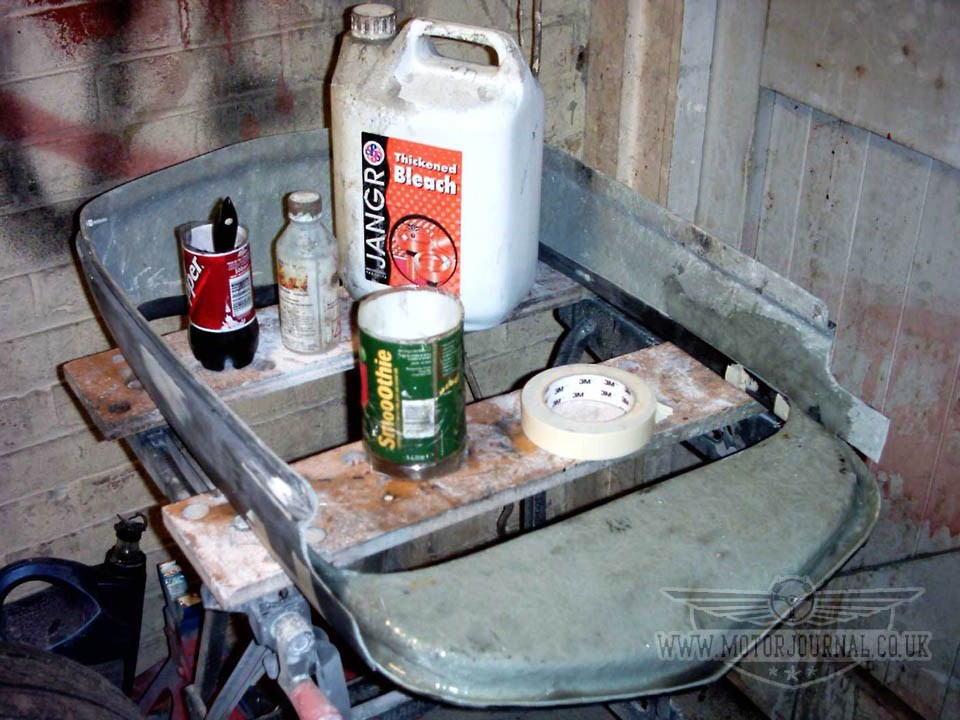 Before long I was back to the tedious task of bonding that damn fibreglass strand matt to the back of my grille shell with epoxy resin. For a guy who prefers to stay clean this was a pretty gruelling task, I don't think you can do this while staying clean at all, and over the course of the evening several layers were built up, both on the back of my grille shell, and also, the front of my overalls! 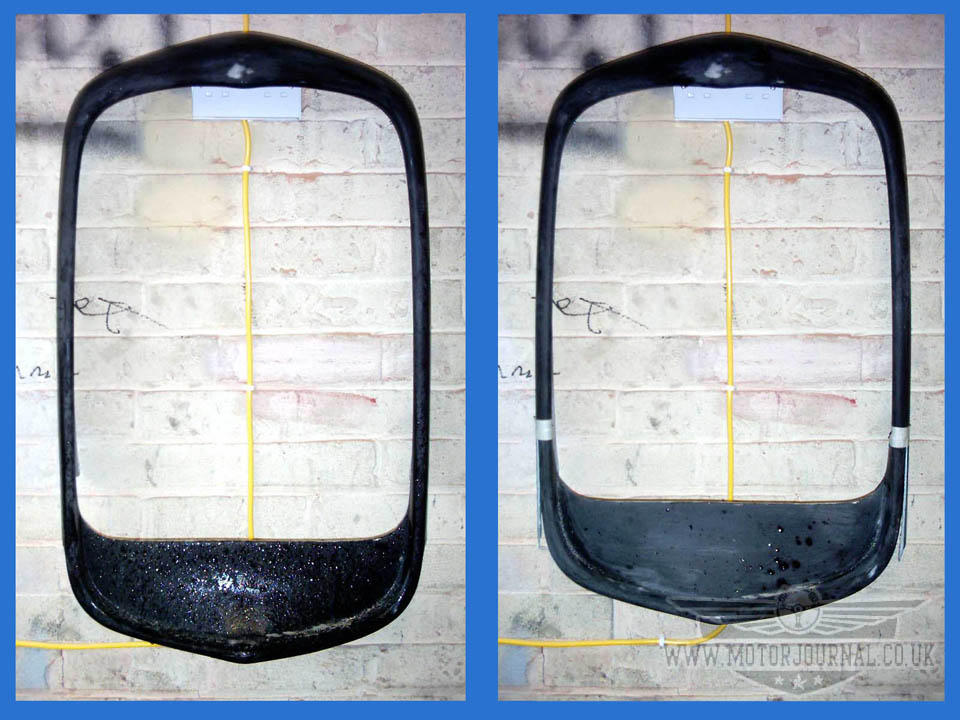 Although, while the grille was on the Hot Rod it really didn't look much different, the before and after photo shows just how different it looked. Of course, what this meant was that there would be no way I'd be using a standard Ford Model 'B' grille insert now! Initially I was a little bit ticked off when I realised that I'd need to make something different, but as time went by I thought that actually not being able to use a standard insert was probably a blessing in disguise as it allowed me to think up an idea for how it should look, so I made my peace with that. although, it did take several months for me to come up with an idea, and then turn it into reality. 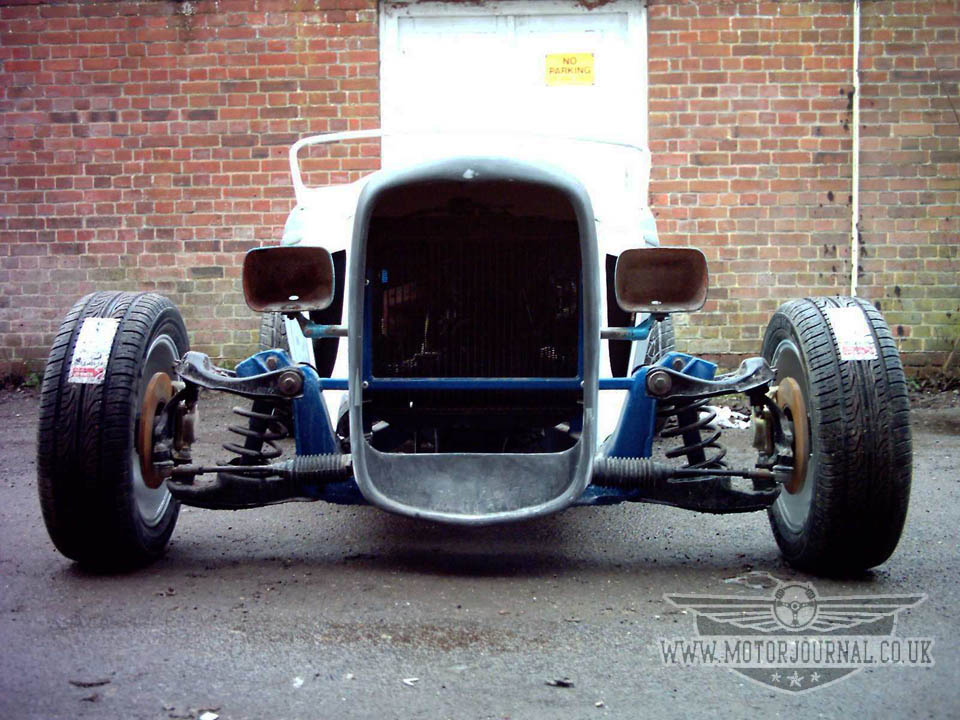 By the following weekend the fibreglass matt had fully cured, and I had filled the outside of the grille shell ready for paint. Of course, I hadn't really, I'd only filled it to get it to the point where I could sand it, and fill it, and sand it, and fill it some more for several evenings on end! But I'm guessing you guys probably knew that already!