May 21, 2019
Bodywork... I hate it. I mean I knew there would be lots to do, but I really wasn't prepared for the scale of activity that the body of my little Hot-Rod would need. 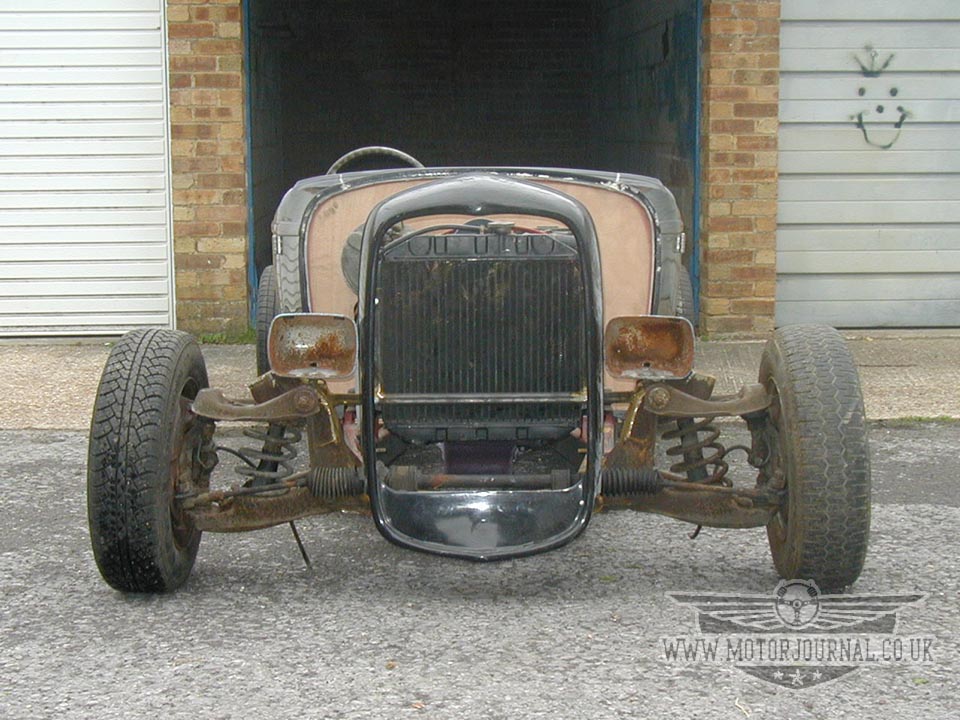 When it arrived I looked at it and thought, OK, so it needs a bit here and there, but I had no idea just how much bodywork would be involved before it came time to lay on the paint. I never thought that we'd go over every inch, massaging it into shape before we were done! I really thought that it would take a couple of weeks, and then we'd be squirting on the paint. But as we looked over the bodywork there were all manner of blemishes, marks, and other areas that needed attention before I could even think about priming the body. Then, on top of that there were the areas where the body had been chopped, to make a roadster pick up, and there were areas that I just wanted to modify to suit my own personal tastes. For the sake of speed I had thought about just going over it with some blackboard paint, and hitting the road, but deep down I knew that I'd never be happy with that. It needed to be blue, and if M.R. was doing it, it needed to be as good as possible before he would even think about making it blue.

Looking at the bodywork I wondered where I should make a start, I asked M.R. what he thought and he told me to just pick a spot, and start, when it's done, then move to the next spot and so on until it's all done! Of course, the other problem was that I didn't really know what I was doing, and even under the tutelage of M.R. I felt that I still wouldn't be able to do it. Anyway, I picked a spot... The cowl. 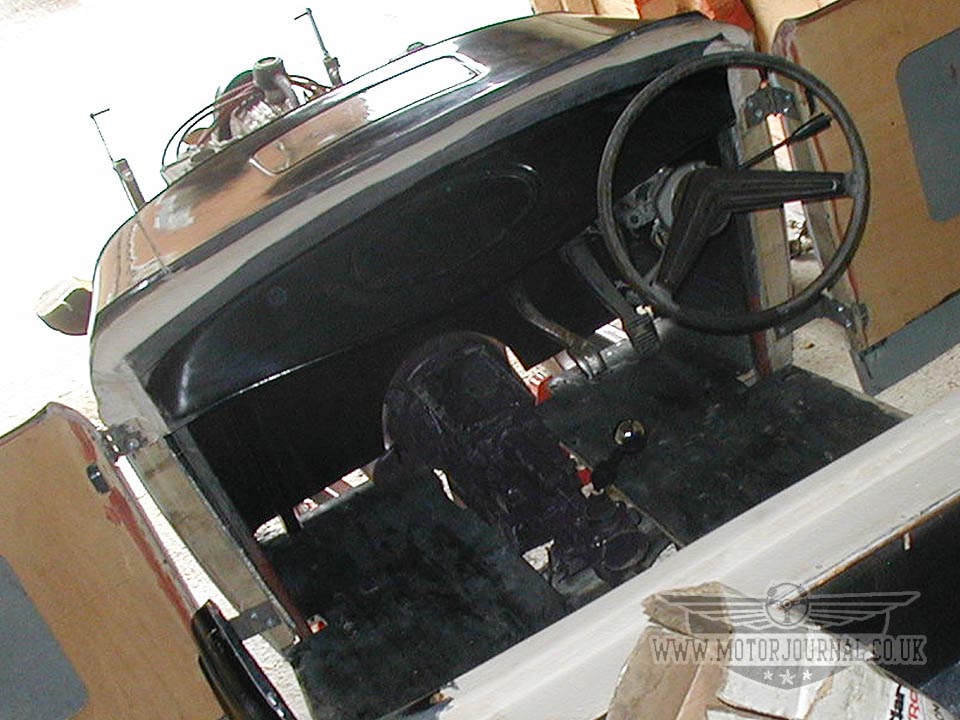 The reason I thought that this was a good place to start was because I had planned to fit a DuVall style windscreen, which unlike the standard '32 Ford roadster screen is a two piece affair arranged in a 'V' shape. Therefore on the top of the cowl the recess for the cowl vent would need to go, as would the ridge that the Standard '32 Ford screen would butt up to. Filling the recess around the cowl vent wouldn't be much of a problem. The recess was scuffed up with sandpaper, then some epoxy resin was mixed up and used to fill the indentation. This was then sanded roughly into shape before a thin coat of filler, and more sanding. But, chopping the ridge off the top of the cowl would mean that the top of a dash, and the cowl would no longer be connected! 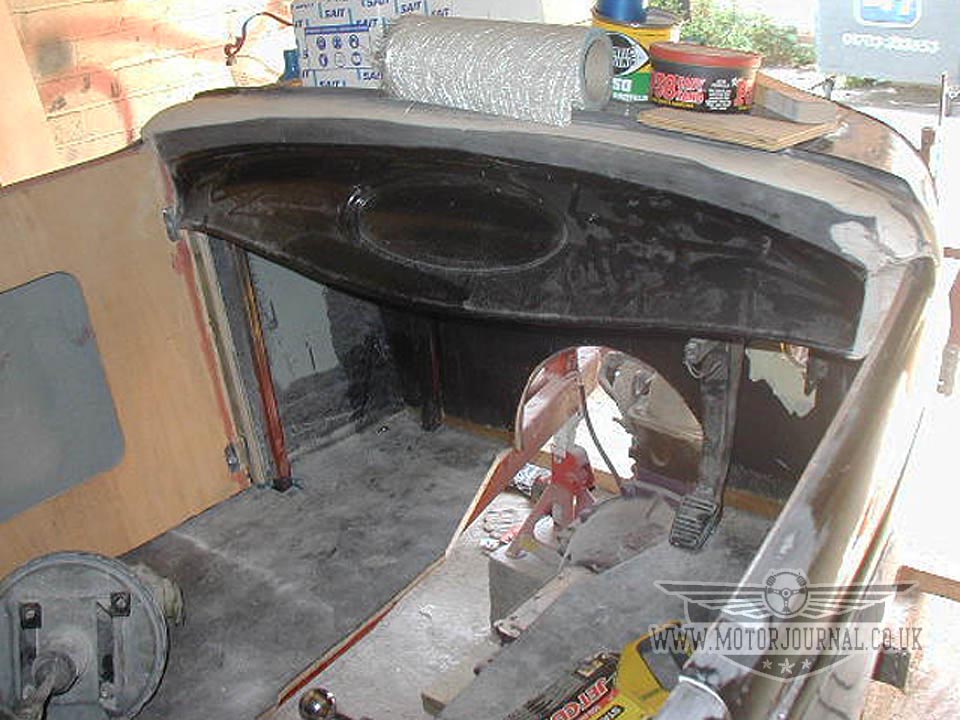 I couldn't help but think that separating the two would not be a good idea if they were to look any good once it was done. Added to that I had decided that I wasn't going with the standard looking '32 dash either, and G.J. had offered me another dash of unknown origin which I sort of liked the look of. 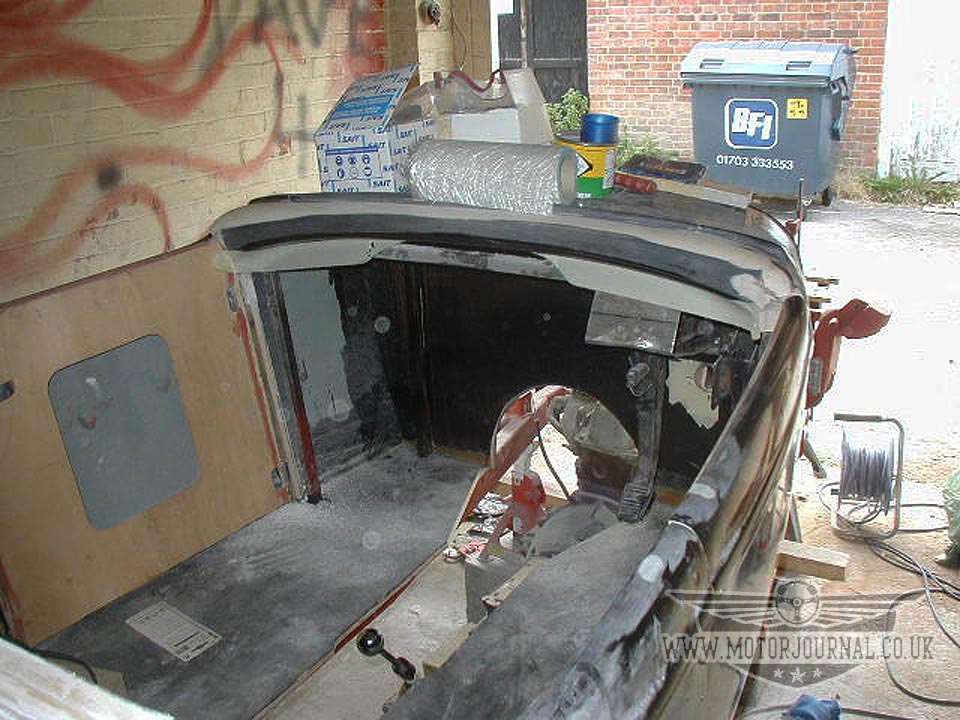 The dash was sliced out, and this gave us room to get under the cowl and start to apply several layers of fibreglass strand matt. Now, it doesn't seem to matter how careful you are with this stuff, somehow the resin gets everywhere. For example, somehow I managed to get a little puddle of the stuff in my lap, and although you would think that as I was wearing overalls it wouldn't be a problem, all of a sudden my crotch felt very very hot. My initial reaction was that I thought somehow I'd caught on fire. But no, it was just the resin setting on my overalls, and bonding them to my jeans in the process. I guess I should just be thankful that it only soaked through as far as my jeans. As a borderline Wookie I feel that had the resin penatrated through my jeans and beyond, removing my clothing after it had set by the time I got home would not have have been all that comfortable! Anyway, with five layers of fibreglass strand matt bonded to the underside of the cowl I left it to fully cure. 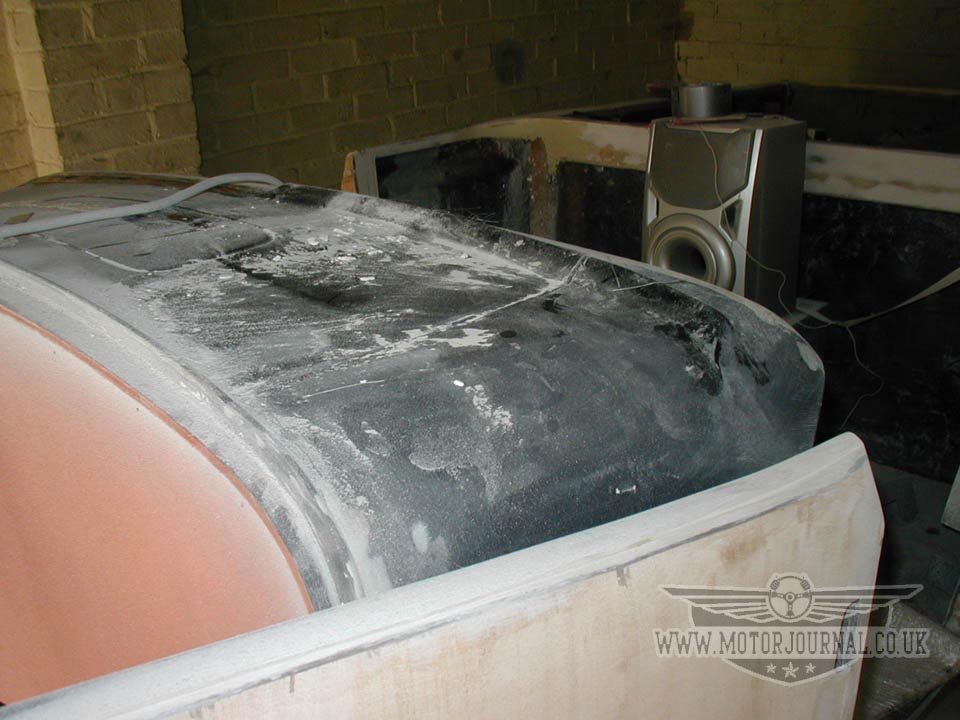 The following day, after the fibreglass strand matt had fully cured (as had my overalls) I returned to start thinking about removing the ridge. Despite the multiple layers of new fibreglass beneath it we decided that the best way forward would be to remove the ridge one half at a time. Then, before removing the second half we would fill the first half and leave it to fully cure. 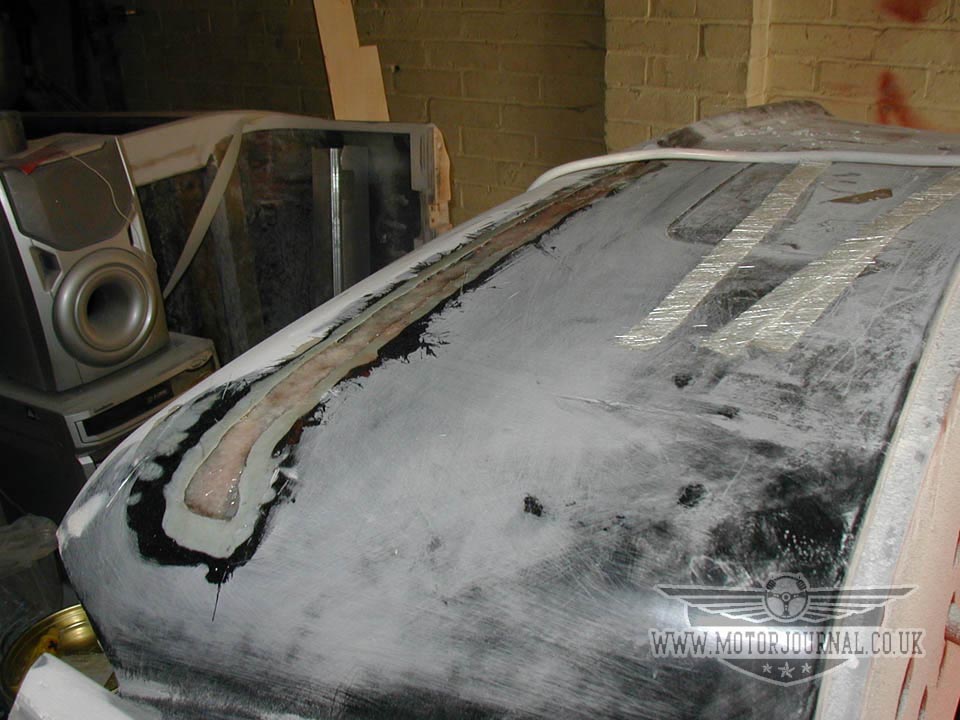 The first half of the ridge was ground back, filling the garage with fibreglass dust. Then we cut the fibreglass strand matt into strips wide enough to drop into the cut we had made, and fill it. I mixed up some more resin, and carefully put it into the incision, followed by several layers of matt. This was left to dry, and after a day or so we repeated the process on the other side.

A couple of days later and it would seem that our idea had been a success, and the cowl had remained as rigid as it was before we had cut the ridge off it. We gave it a quick wipe over with a thin coat of filler, and roughed it into shape.

Then turned our attention to re-fitting some sort of dashboard. 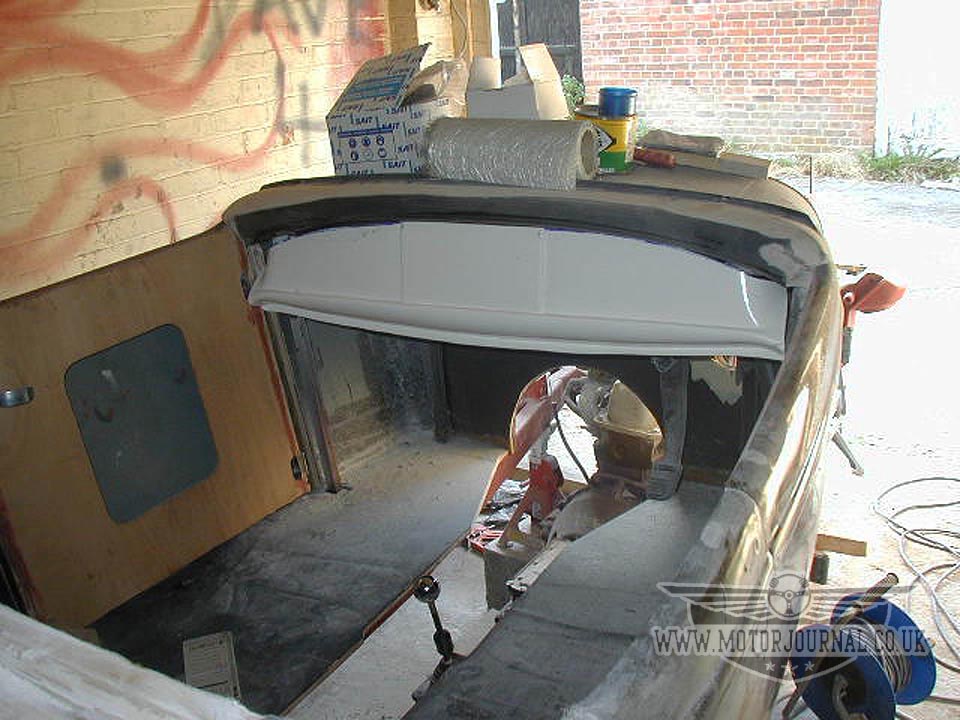 I wanted to leave the 'brow' of the '32 Ford dash, it was just the bottom bit I wanted to change. The new dash was offered up, but it didn't look as good as I'd hoped as the bottom edge was just a bit square. So we took it back out, and offered it up again, but this time we tried it upside down. I kinda liked this a lot more as it made the bottom lip of the dash just look a little more finished than it did with the sqaure edge that was supposed to be the bottom. We had cut the bottom half of the '32 dash out in such a way that we left some tags to fix this dash to. So we drilled, and countersunk the dash, and bolted it into place with a layer of Gripfill in between. This was followed up with yet more fibreglass strand matt being used behind it to bond it firmly into place. After four layers or so we were looking at the fitted dash. 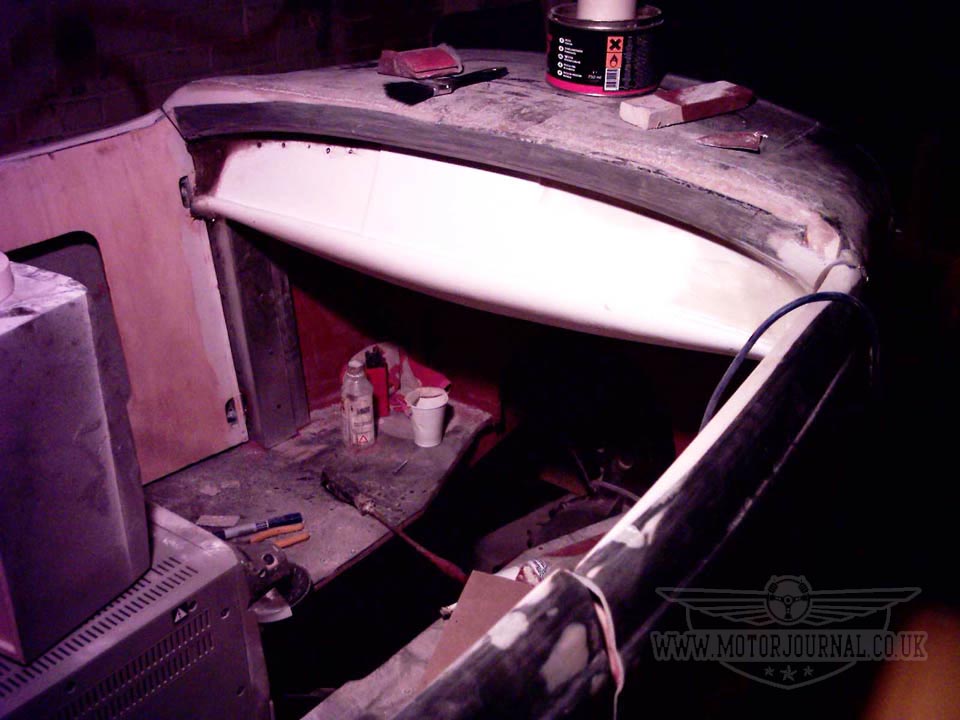 That thing is going nowhere, and after a bit of fettling I was pretty happy with it. We mixed some strands of fibreglass with the resin and used it to fill the gaps all along the top edge, and sides of the front of the dashboard, pressing it in, and trying to roughly shape it as it dried. By the time we'd finished we'd been almost two weeks faffing with the cowl, and dashboard. It was nowhere near finished, but it had all had a good skim of filler, and had been roughed into shape. M.R. said that before the paint there would be far more filling, sanding, priming, filling, and sanding. But he was happy that we could move on to another part of the bodywork, and start to get that roughed into shape now!