April 25, 2019
Cleaning up the front of the chassis where the suspension mounts  is a pretty tedious job. Not only was there a fair amount of pitting, but as I attacked it with the wire wheel I did manage to create a few little holes. 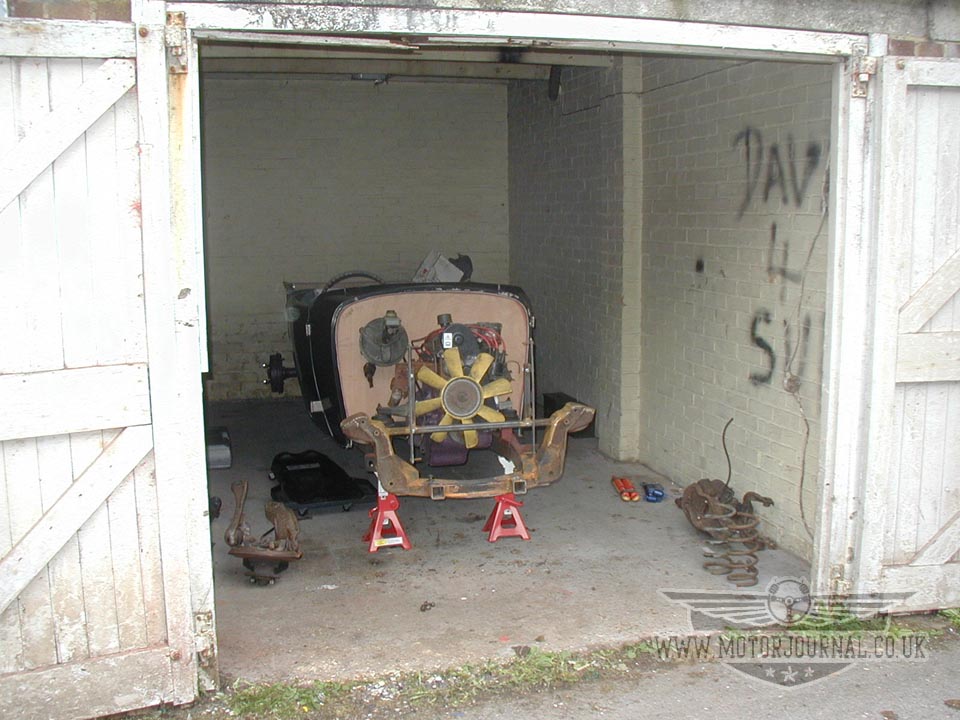 Nothing major, just flamin irritating! The thing is, if this still had a full body draped over it like it had originally, although it wouldn't be fine to leave it like it, atleast it didn't need to look pretty. But now, being fenderless and all it was going to need to look a bit better than it did if it was hidden away. I wanted to make sure that I had got all the rust out of it, and that any holes that were going to appear due to the metal being a bit thin, would appear so that I could see them and do something about it. 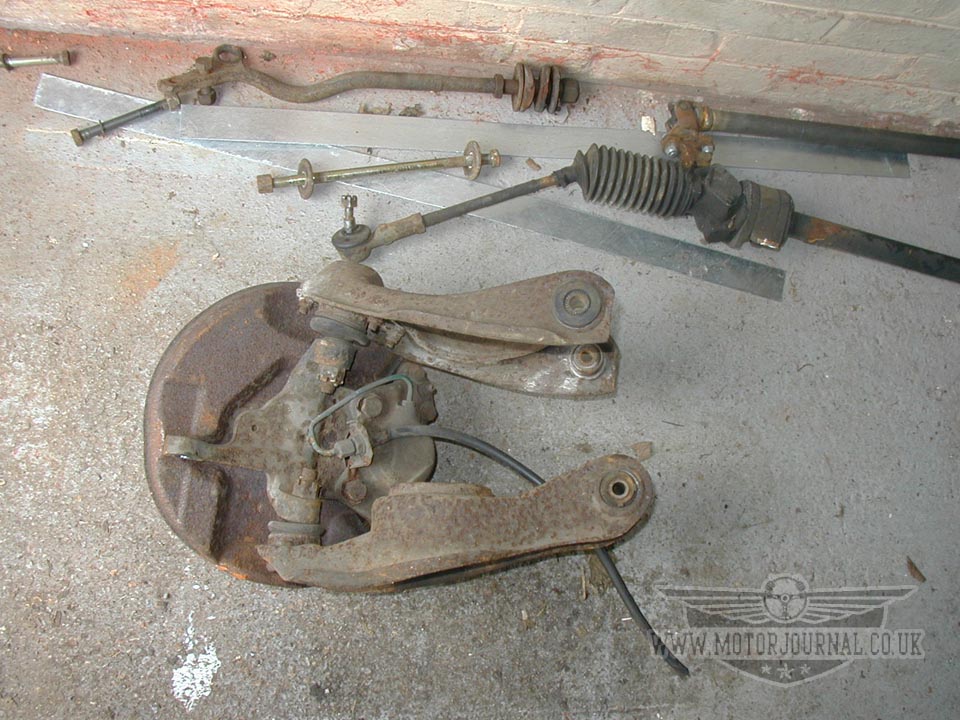 All the suspension and brakes from the front were removed, and either dispatched to get sandblasted and powdercoated. Or were just put in the bin, and replaced with new. I did have a budget that I was trying to stick to, but the more I thought about it, the more I thought that I probably would only do this once, and so I should do it right. After taking this little lot off the front I decided that I'd replace all the bushes, ball joints et cetera, as well as the brake discs and steering rack. On top of that I had the front calipers reconditioned, so they were as good as new, hopefully! 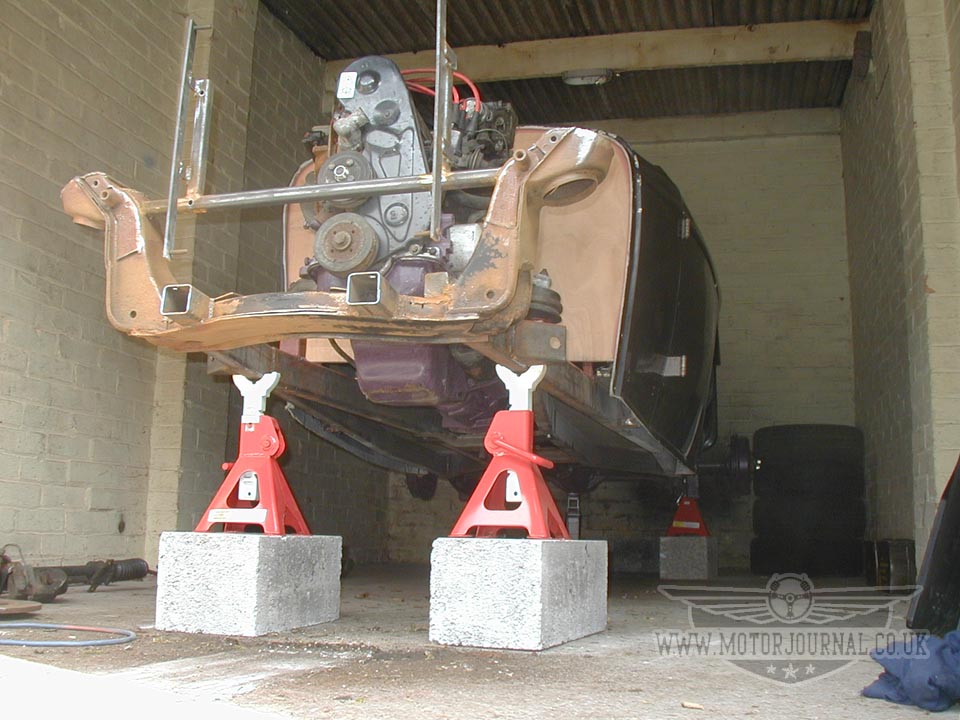 The Hot Rod was put up even higher by putting concrete blocks underneath the axle stands. I'm sure this would've been fine with the health and safety police, but as they never came to my garage I figured that it would probably be OK. The reason for the added height was partly to get my fat belly under there, but mostly so that I could use the grinder more easily. I must've been under there for weeks grinding, sanding, treating, and finally painting. But I think I'm getting a bit ahead of myself. I wanted to start one job, and finish it before moving on to the next job, and so my priority was to get the front looking a little more presentable, after all, there wouldn't be much to camoflage it as it would all be just hanging out in the wind from now. I did briefly think about having a full set of sweeping fenders, and I still think that would've been cool, but it would've been more expensive to buy the fenders. Plus, I doubt that it would've saved me anything, because I would've probably still attacked the chassis hard with the wire wheel, and although I'd probably save time by not needing to make it look too pretty, it would probably cost me more time making brackets up to attach the fenders. I was backwards and forwards debating if I should have fenders or not for weeks, and in the end, I decided that fenderless was more Hot Rod than full fendered. Although fenderless is a sketchy area if I ever did get pulled over by the police, but I thought that I'd burn that bridge when I came to it! 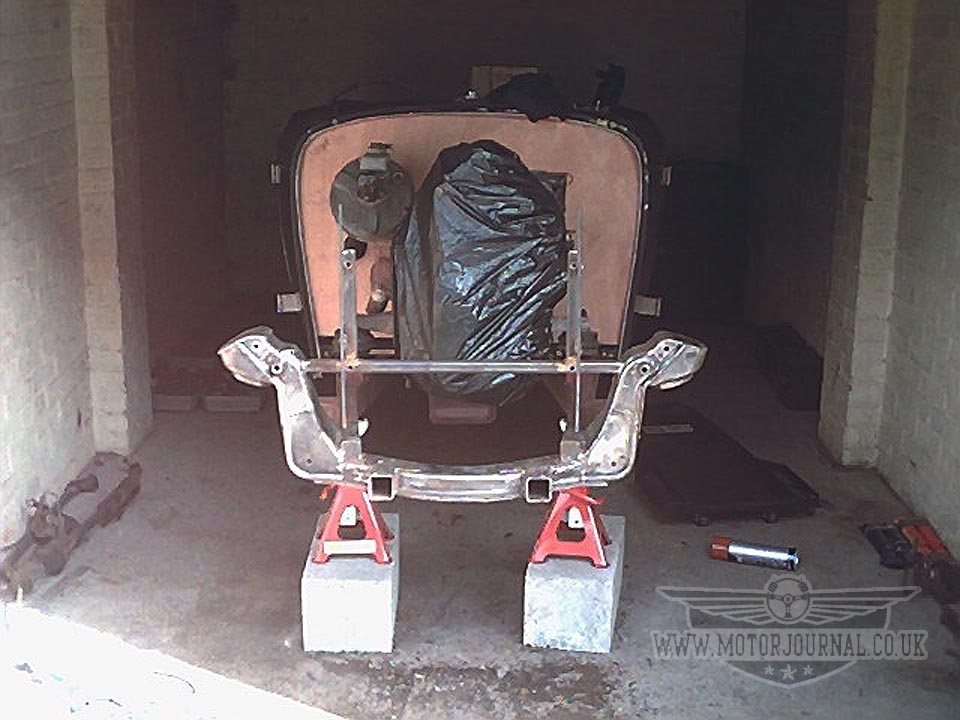 Anyway, the funny thing about cleaning up the chassis was the more I cleaned it up, the more I found that needed attention! I really did feel that I was going round and round in circles, chasing the rust, that became holes. But eventually I had a clean bare metal front of the chassis, it looked good, well, apart from the pin holes in it! 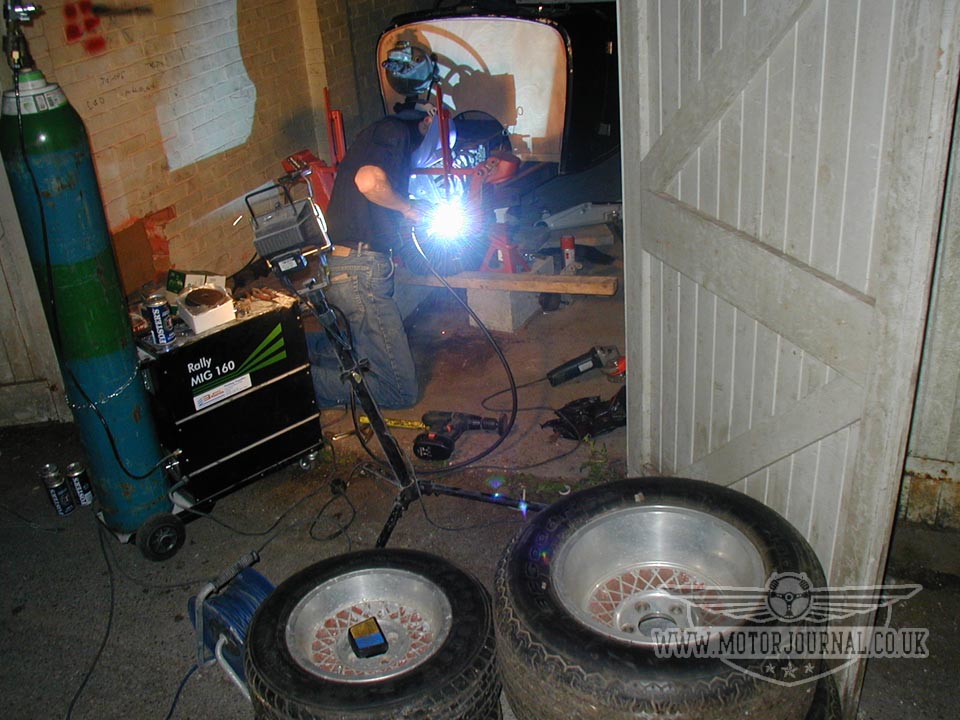 M.R. broke out his welder and we spent a very long evening welding, grinding, welding, grinding, welding, grinding, and so on and so fourth! The problem with now having an exposed chassis was that the less than perfect original kitcar manufacturers welding although strong was not exactly pretty. The original welds were dressed back, and re-welded. This took forever, M.R. was something of a perfectionist, and if it wasn't perfect, then it would get all the attention it needed until it was perfect. Infact, even the welds that would be covered by the grille, saw the same meticulous attention to detail as the welds that would be on display! It was a gruelling task, but by 03:00 hours we were done welding and grinding, and so we gave it a quick coat of red lead and headed for bed! Not together I might add, M.R. went to his bed, and I went to mine on the other side of town! 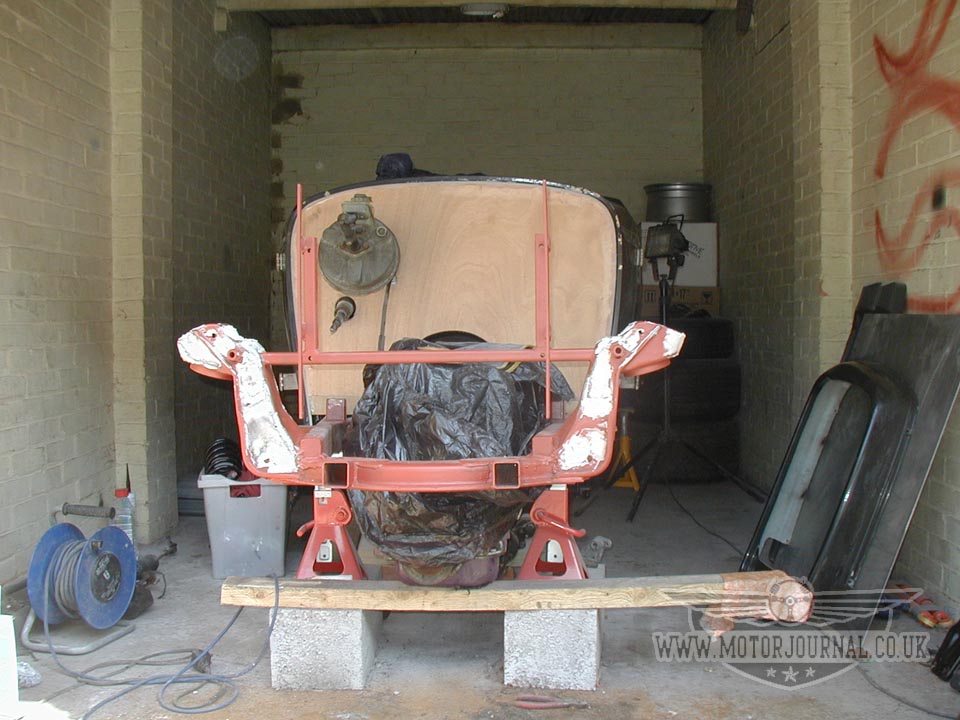 The next day when we arrived to look at our handiwork we were pretty pleased with it. It wasn't pefect by any means, but it was a lot better than how it started out. Then the filling began. Much like the rust removal this went on for days on end, filling, sanding, filling, sanding, and so on. What I didn't realise at the time was how this part of the project was just the tip of the iceberg as far as preparation for paint was concened. I had no idea just how much preparation we would have to do to get the front part of the chassis in a satisfactory condition to squirt a little paint on it. But for well over a week it was filled, sanded, painted, sanded, and filled going round and around in circles I actually wore my fingerprints off with all the sanding, but eventually the sanding fun was done, and M.R. was happy with how it looked. To be honest I was happy with how it looked long before he was, but he kept saying that proper preparation for paint will make the difference between it looking great, and just OK after he puts the colour on, and as he was the expert, I had to agree with him, and just kept going to get it looking good. Like I said, I was probably only going to build one Hot Rod, so it wanted to be right first time!