January 20, 2019
I thought that I'd take the Mini out for one last spin today as the weather was nice. I went out and just drove aimlessly about for an hour or so, just so that I could think through without distraction the idiotic idea about selling the Mini. 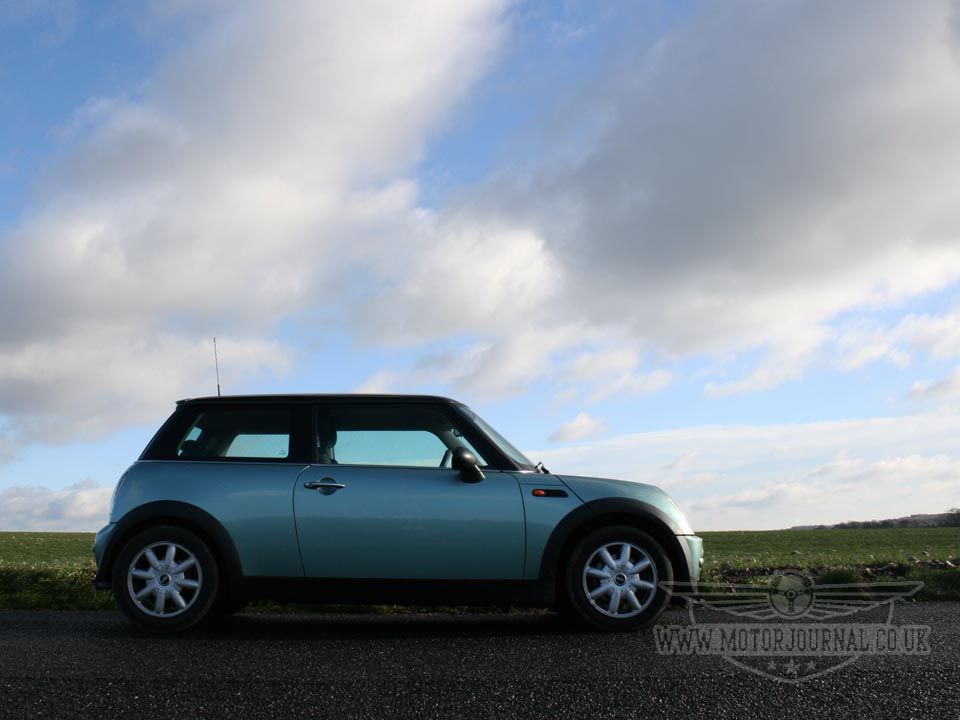 Actually the idea of selling the Mini would've probably been fine, but I was offered a swap, and frankly as curious as I was about what was being offered, I really wasn't sure about having it. But... 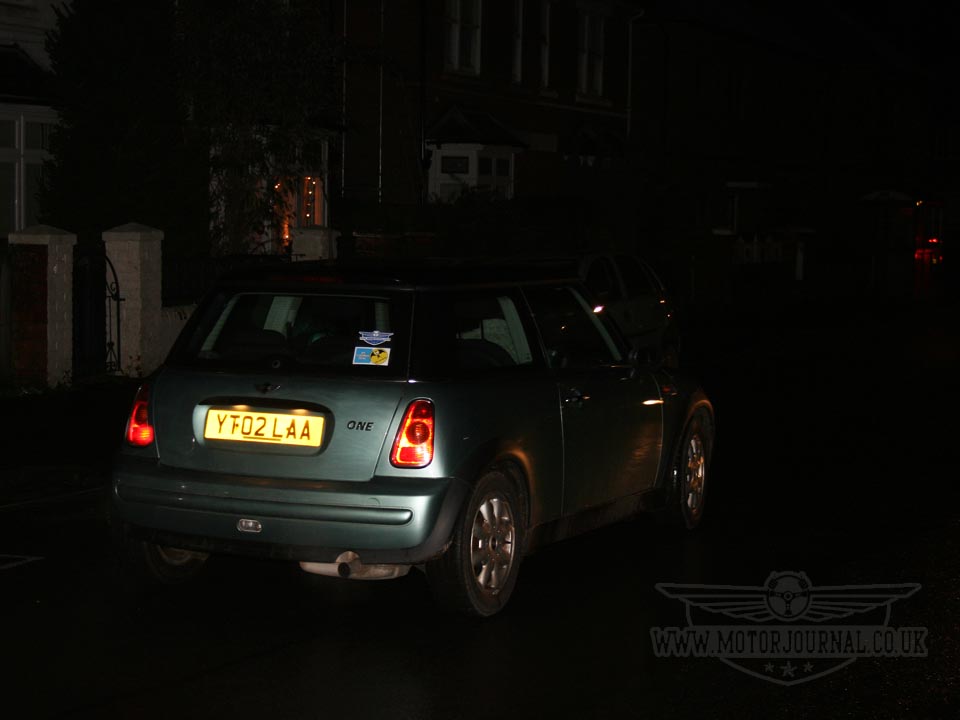 Away goes the Mini, and I'm no better off financially as curiosity got the better of me, and I went for the swap!

So what can I tell you about my couple of months or so of Mini One ownership? Well, straight off the bat I can tell you that I liked it. It was good, actually it was far better than I imagined, it was certainly better than my first Mini ownership experience, although to be fair, that was a proper Mini, and this isn't. It seems odd to me saying that, because in my own back catalogue of cars that I've owned I have had four (I think) third-generation Mustangs, these were built from 1978 until 1993. Built on Ford’s 'Fox' platform, and therefore commonly referred to as the 'Fox' or 'Foxbody' Mustangs. If you're unsure what these are or look like then have a look at Episode 16 where I twitter on about them. Anyway, one thing that used to bug me a little bit about owning these Mustangs were the amount of people who delighted in telling me that it's not a proper Mustang! Even owners of the fourth generation Ford Mustang, code named 'SN-95' by Ford, which was based on an updated version of that same 'Fox' platform would tell me that it's not a proper Mustang, but theirs obviously was! I was younger then and it used to boil my wee wee! Yet here I am now saying this is not a proper Mini! So what's the difference? Well, in my warped little mind the difference is simply this The 'Fox' Mustang was a Ford Mustang, built by Ford, and was the Mustang of that time period. The Mini One was the first model launched by BMW under the Mini marque after the original Mini was discontinued in 2000. The new model built by BMW is technically unrelated to the original Mini. I will admit that it drew inspiration from the original two-door Mini, and that development of the car was conducted between 1995 and 2001 by the Rover Group. I will even go as far as to say that had it have been produced by the Rover Group, and sold as a Rover Mini, I would agree that then it could be considered to be a proper Mini. But the fact is that despite a few really early Mini Ones, that are badged as Rovers, on the whole they're BMW's... Even though they were produced in Cowley plant in Oxfordshire, much like the original or proper Mini, although that was also produced at Longbridge plant in Birmingham as well. 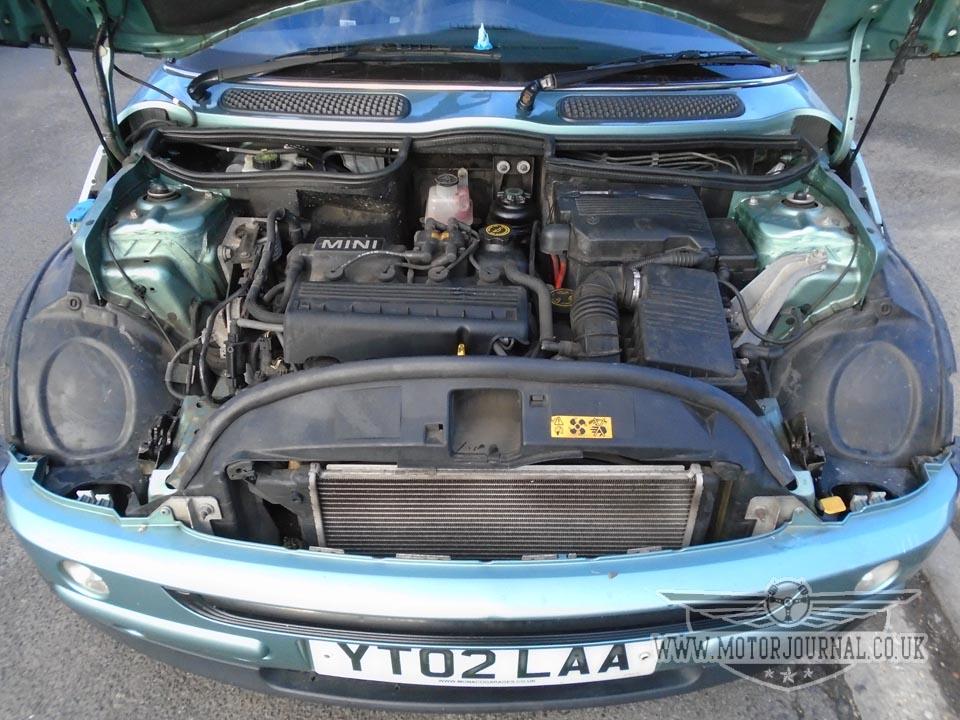 Under the bonnet the little 1598 cc whirs away and will propel the Mini along the road very well, spirited driving was achievable even at legal speeds, and it has to be said that it is very good fun to drive. I never found it wanting for power when I was driving it, and even loaded up with Mrs Clint and our two little Monsters it wasn't too bad. From a handling stand point it handled quite well, although when it was very wet it would like to understeer a little. But for the most part with a wheel at each corner the car could handle whatever that 1598cc engine could throw at it. 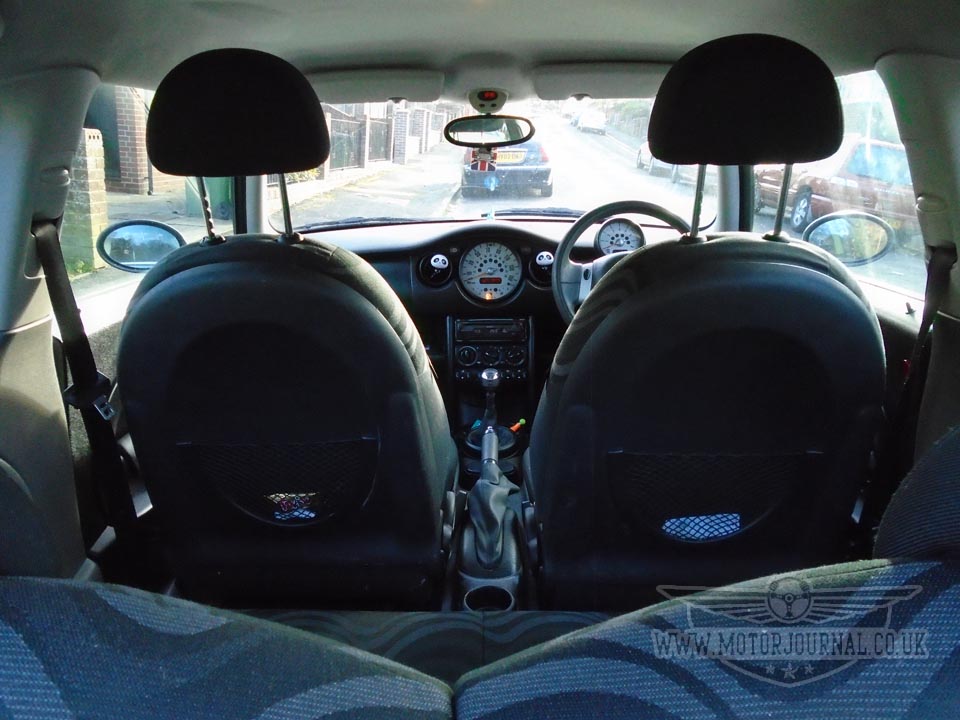 Inside the cockpit I must say that I quite liked it, but I guess that's because I wasn't sitting in the back! The front seats are relatively comfortable for anything up to about 90 minutes of driving, but after that I just can't seem to be able to get the seat in a comfortable position no matter what I do. But for what it is it's quite roomy inside too, as long as you're sitting in the front . However there is next to no leg room in the back, even if you're a child, and our two little Monsters would complain about their lack of leg room after about 30 minutes or so! This usually meant that Mrs Clint and I would move our seats forward slightly, which made the Monsters happier, but I was then hunched over the wheel, and found it difficult (because of the pies) to get into or out of the Mini! The other thing I think is worth mentioning is that despite it being a hatchback, the boot is tiny, if you think you're doing a weeks shopping for a family of four, well you'd better think again! 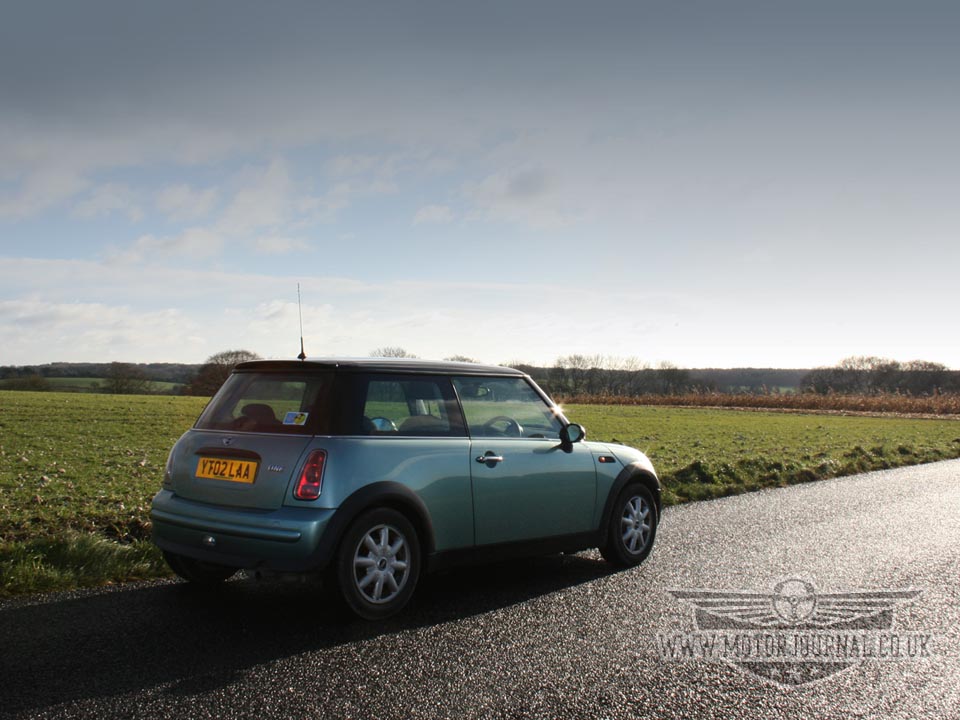 But really this is the only thing I can complain about during my Mini One ownership. For the most part it was only ever used to carry myself, and one passenger, usually my littlest Monster, and for the two of us it was pretty damn good! The ten minute or so school run in the morning became quite a blast in the Mini, to the point that I was almost looking forward to it! In fact, when we would go out for a little drive we had started to include the school run route in our drive on the way back home again, even though nine times out of ten we would be going out of our way to do so! I can really see the attraction to these little cars, I genuinely had my doubts about it when I got it in the first place, but now, having had one, I can see why people like them. Although, I still feel that there are far too many out there for me to want to keep one long term, but I am quite glad that I have owned one. 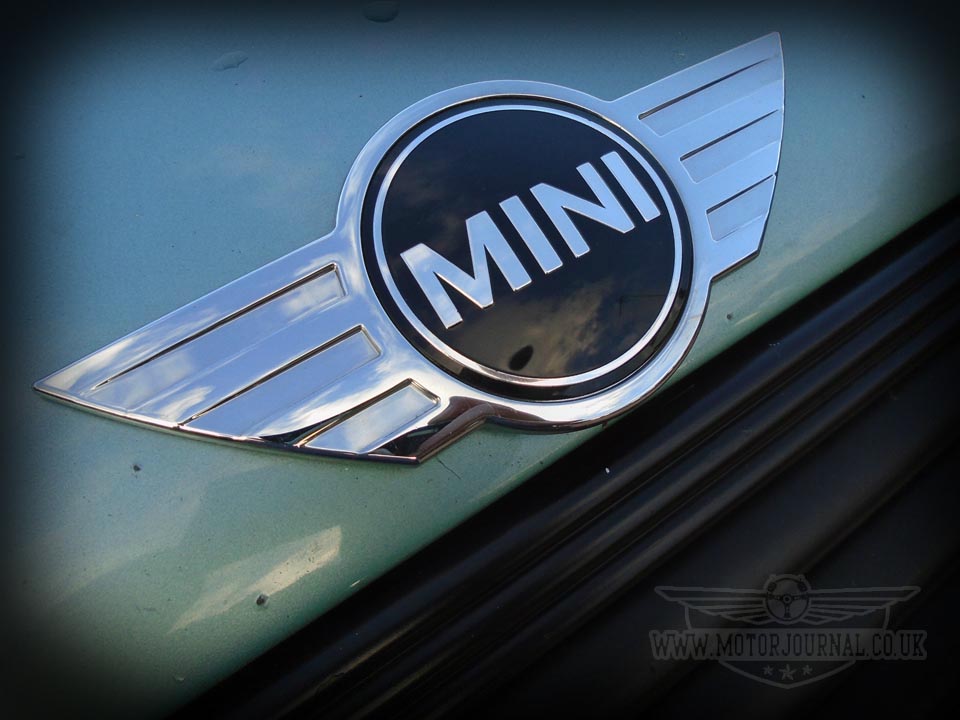 So where do we go from here? Well, short term you will probably find out in the next week or so, but long term I wouldn't rule out another Mini. At some point I would rather like one of those Mini estates, or that little two seater convertible Mini they do! I also think that if they ever made a factory Mini pick up I would find myself in the queue to buy one of those at some point too! But as for the Mini One, I think that as much as I do like it, and I really do, I've probably scratched that itch. Mainly because as I said earlier it's far too common for me to really want to hang on to it. Having said that, if one came along that was too cheap to ignore it would be rude not to have it!

So now that my Mini adventure is over you may well be wondering what it is that I have swapped the Mini for? Well, at this particular point in time I ain't gonna tell ya! 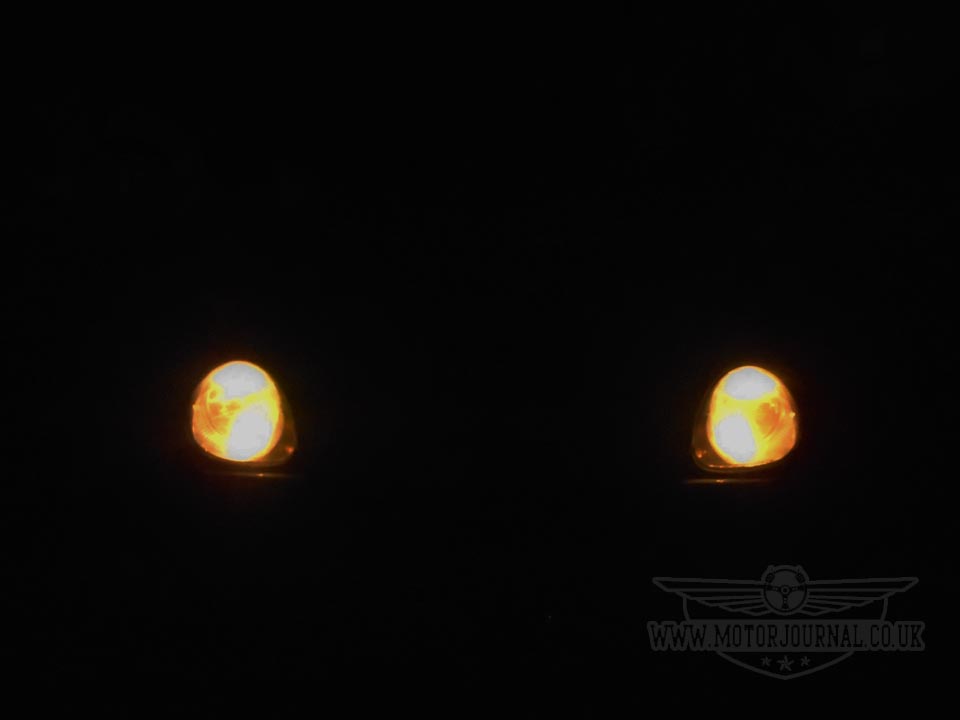 Because that will be a tale for another time...