January 17, 2019
The week following the visit to G.J's. house to see his prototype, M.R., M.C., and me talked of nothing else. M.R. had pretty much decided that he was going to build one. M.C. had decided that he would see what the thing looked like when it arrived at M.R's. house, and if it was any good, he was going to build one, and I was still procrastinating obviously, but I wanted to be included in the journey, and so I said that whenever they went to see G.J. to talk Hot Rods, I would come along too. I did want to do it, but I still wasn't sure I could, and I felt that it was a lot easier sitting in an armchair reading about them than it was doing it for myself! The following weekend, we all piled into M.R's. car, and headed off to Bournemouth. 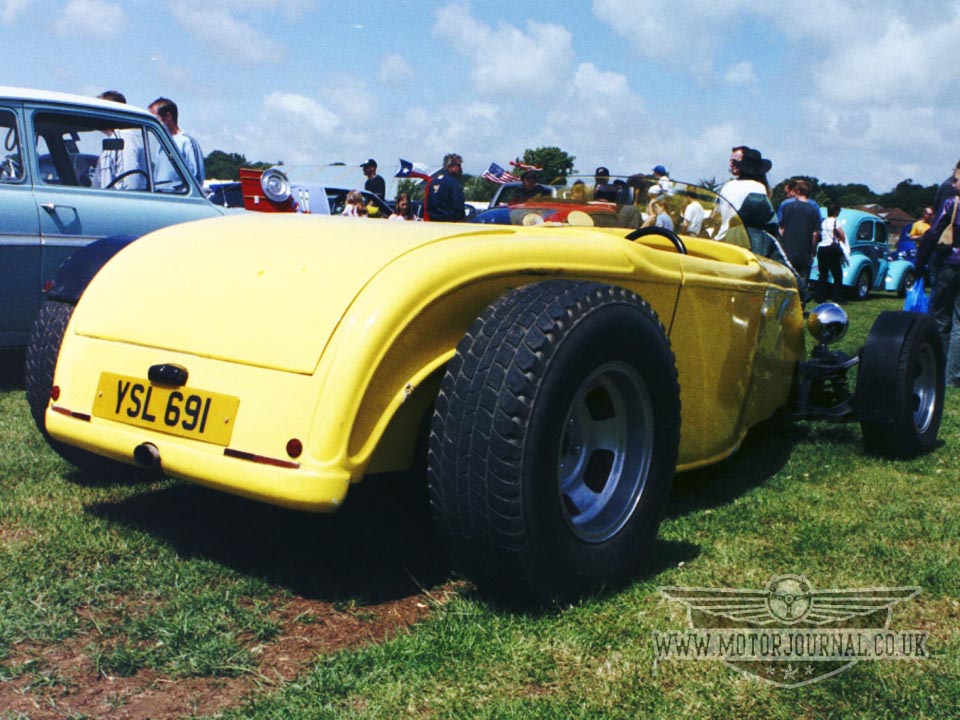 We all chatted with G.J. for over an hour, and we all got various questions answered. Then M.R. discussed exactly what he wanted. G.J. listened and made a few notes. After a little while G.J. said that he would get the ball rolling as soon as he had a deposit, M.R. was ready for this, and produced from his pocket a large roll of fifty pound notes. The deposit, and a good portion of the full cost were paid, and G.J. promised him he would have the parts he needed to build his Ford model 'A' Hot Rod in six to eight weeks! G.J. then looked at M.C. and me and asked if we were going to put a deposit down too. But before we could say anything M.R. told him that we were both too chicken! I didn't argue, for me at least there was an element of truth about that.

On the way home we discussed having a fortnightly trip to see G.J. to keep an eye on the progress, and to get a better idea of how it was coming together. Six weeks into the build of M.R's. build it was quite obvious that although it was coming along nicely, another two weeks would not see it ready for him to collect. But it was getting close, close enough for M.C. to take the plunge. He discussed with G.J. how he wanted his car, he wanted a '33 Ford coupé,  but although M.R. had requested a fair little bit of work to be carried out on the body before he took delivery of it, M.C. wanted to save a bit of money off the listed price, and have as little work done to the body as possible before he took delivery of it. He felt that this would save him both in money, and in the time he would have to wait for it to be ready for his collection. In his mind he would be picking up his '33 Ford parts around the same time as M.R. would be collecting his model 'A' parts! In my mind this was false economy, but it wasn't my Hot Rod, so I didn't really have a say in it. Anyway, as before with M.R., G.J. listened to M.C's. requests, made notes, and then told him he would start as soon as he got the deposit. Once again out came a fist full of fifties, and after counting them, G.J. looked at me and said, just you left then. When are you going to order one? I told him that I was still unsure what I wanted, but I was getting close to ordering one! We then all piled into the car and headed for home. As usual the talk was all Hot Rod orientated, and that was laced with a fair amount of urine taking, and cluck-cluck-clucking because I still hadn't ordered one! That night I laid in bed thinking about it, and the more I thought about it, the more I needed to know more about it. I decided that I needed to go and have a conversation with G.J., and his workforce on my own, and to make my own notes. That Wednesday I arrived at G.J's. workshop, notebook in hand. 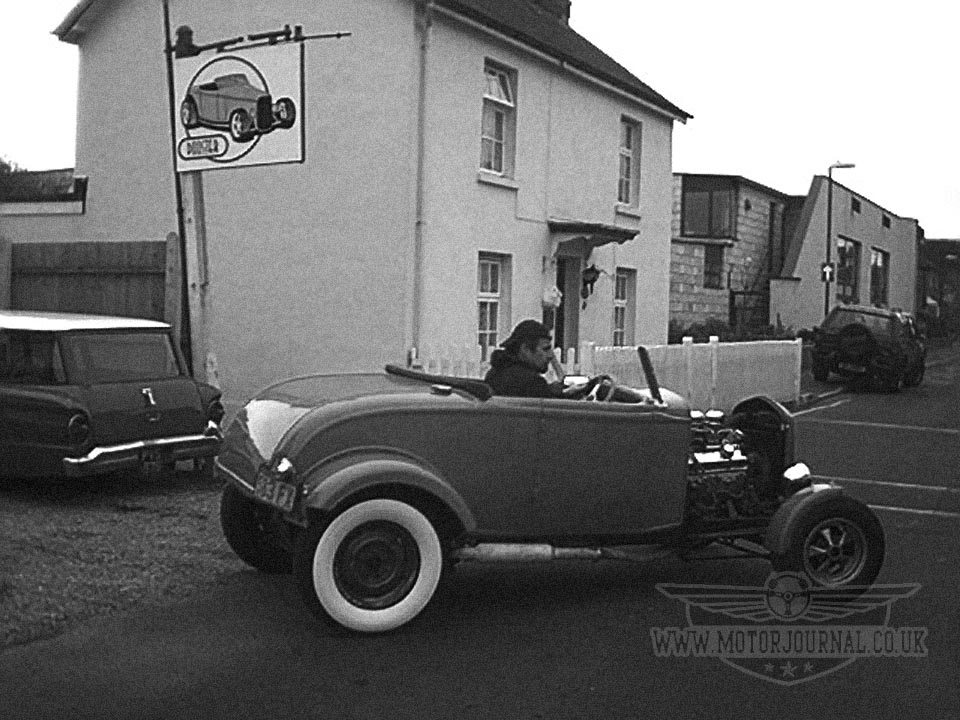 I think they were a little surprised to see me without my two accomplices, but I told them that I wanted to discuss my own Hot Rod without the distraction of my friends Hot Rods. We looked at M.R's. model 'A' that despite only looking at it four days before hand it had come on quite a bit. M.C's however had not yet been started. G.J and I sat down to discuss what I wanted. I told G.J. that I wanted a 1932 Ford model 'B' three window coupé. G.J. said that this was extremely possible, he then asked if he needed to build me a chassis for it, or would I find my own. I asked him what the benefits of finding my own were. He told me that if I found my own the benefits would be that that it would already be ready to go, and would make the build process faster, and easier. He then went on to say though, that on the downside, if the idea of a '32 coupé was set in stone I would need to find a chassis with the right wheelbase for a '32 coupé. To be honest that sounded pretty obvious, but I asked him what my options would be if I couldn't find something with the right wheelbase. G.J. said that if I couldn't find a wheelbase that was within about 5" of a stock '32, then I could build a smaller model 'A', or 'T', and if the chassis was larger, then perhaps a '32 pick up, as the bed could be made any length to accommodate whatever the wheelbase of the chassis I found had. I told him that I was going to need to give it a little more thought, but the idea of a '32 model 'B' roadster pick up was starting to sound like a better idea than a '32 model 'B' coupé. I headed off back home, filled with ideas, and thoughts of my own Hot Rod. I felt I was getting close to ordering one now... Really close!

By this time car show season was in full swing, and the following weekend I was at a car show in Dorset, and I spied with my little eye something beginning with 'B'... 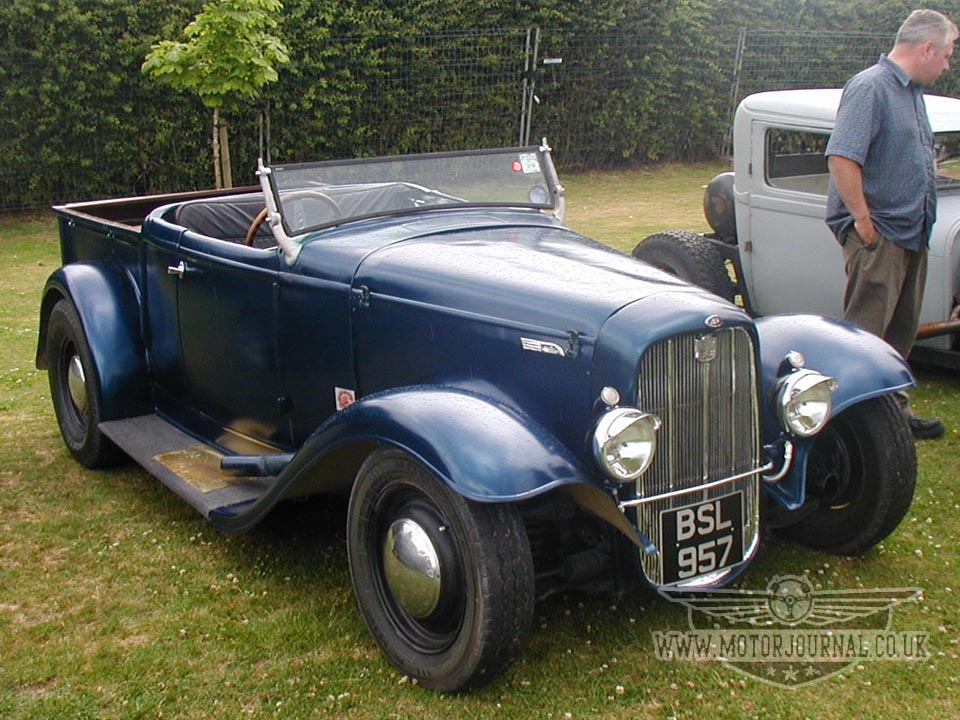 Actually, it turned out that it was really something beginning with S! I talked to the owner for some time, and he told me that it was a model 'B' roadster body that he had bought from G.J., and he had cut the back off it, and mated it to a model 'A' pick up bed. He had then mounted the whole thing on a Reliant Scimitar chassis! I asked him what it was like to drive, and he said it was pretty good, drives like a three litre Scimitar. Which is exactly what it was. He did say that it was a little bit draftier though! 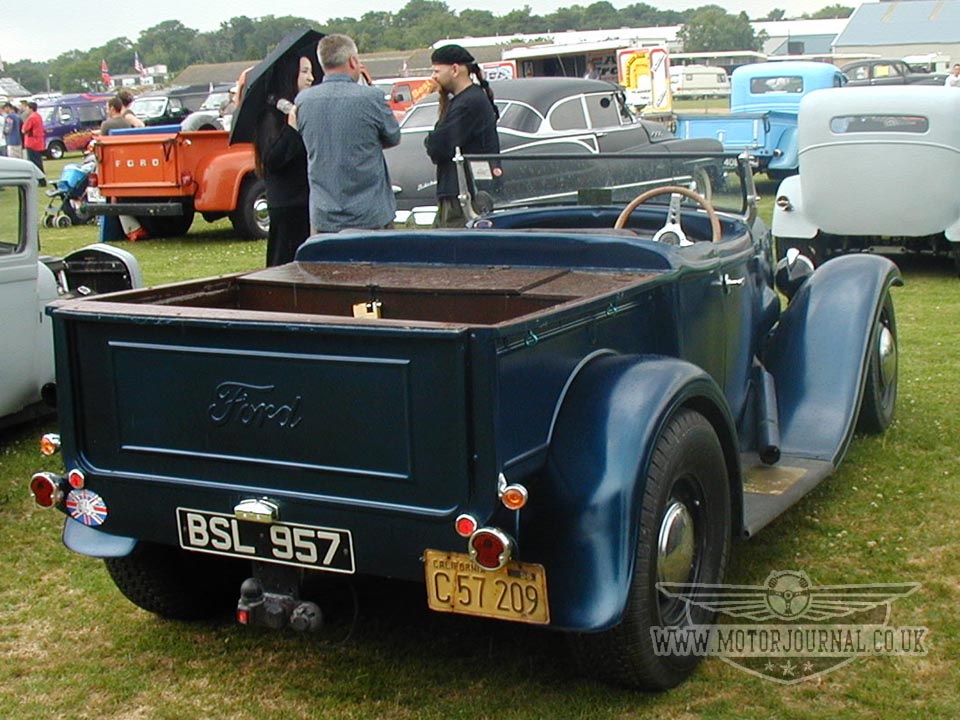 We chatted for some time, and he talked about the pros of using an existing chassis, and just sticking a Hot Rod body on it, and by the time we had finished talking I was pretty much sold on the idea. This was almost certainly the route I was going to take! I just needed to find a suitable chassis donor!

Three weeks later, and after another two visits to G.J's. workshop, M.R's. model 'A' pick up was ready to collect. His six to eight week build had taken eleven weeks. Although, that said it was still nowhere near to being finished, it had just been built to the point that M.R. had asked for, and he was going to take it from there. The three of us stood outside M.R.s council garage, looking at what had turned up. One of us was now a Hot Rodder. M.C's. '33 had still not been started yet, and this upset him a little bit, but he didn't want to go and see G.J. and ruffle his feathers, as he thought it might end up taking longer then. As for me. Well, on the outside I was still procrastinating, but on the inside I was on a full scale hunt for a chassis. I was buying Auto Trader, FreeAds, and any other publication that advertised cars for sale. I scanned every page, and I was making enquiries. A chassis would be found, and as soon as I had one an order for a body would be placed. My dream of being a Hot Rod owner was getting ever closer to becoming a reality.