November 23, 2018
Ever since owning my Mini pick up, actually, even before that, ever since they came out in 2000 I have thought about having a Mini One. When they came out initially I was quite interested in having one, but the problem was, pretty much as soon as they came out the streets became flooded with them! Those things are everywhere, and the fact is that because they're so popular that put me off owning one. However the other night I had a bit of an epiphany, and thought to myself, so what if they're everywhere, I should still buy myself one to see what they're all about, and so a short while later... 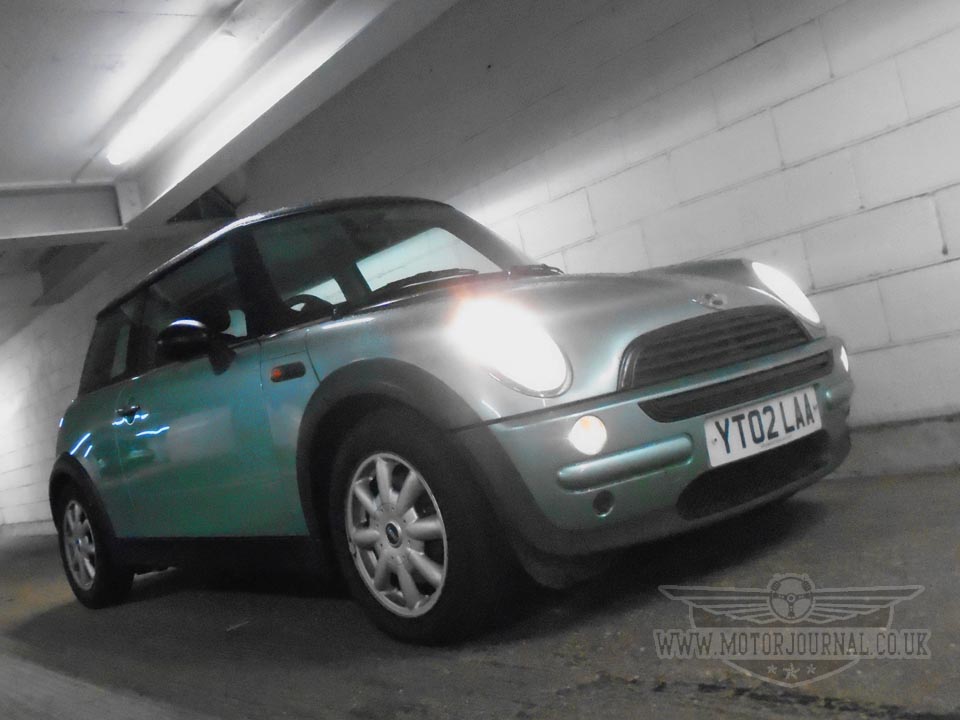 My very own Mini one. I realise that it looks like quite a boring colour in the photos but its actually a fairly pleasant turquoise in broad daylight. You probably have two questions now, why, and whats it like? Well, the 'why' part has already been answered, and as for what it's like.  As expected the Mini is rather good. Unlike the original Mini it is quite spacious inside. Its not a big car by any imagination, but it must be around the same size as an early Golf. With a wheel at each corner it does drive very well, and the 1.6 litre petrol engine pulls the thing along quite nicely, and although you're not going to set any land speed records, it's enough power for a bit of fun. On the whole its not the surprise that the Daewoo was, because lets face it, that thing had no right being as good as it was, and if the Mini wasn't good then why would they make them, and why would people buy them? Although, that being said some people (me) do buy some truly crap cars! Having said that I do believe that a lot of the Mini sales have been due to the legend that the original (proper?) Mini became. I do wonder if when Rover was developing it, if they had called it for example the Rover 25 would it have been as popular? I don't know? Its a possibility I guess, as people may have associated it's retro looks with the original Mini anyway, but I feel that because it was a Rover, just calling it the 25 wouldn't have inspired people to go out and buy one, good as it may well have been. Having said all of that I do believe that had Rover managed to get it into production, and call it the Mini before the BMW take over and subsequent selling off of parts of the Rover group to the Phoenix Consortium, then this car may well have saved the Rover group as a whole. But thats just my opinion, a story for another time, and I'm wandering off the beaten track a bit as usual! 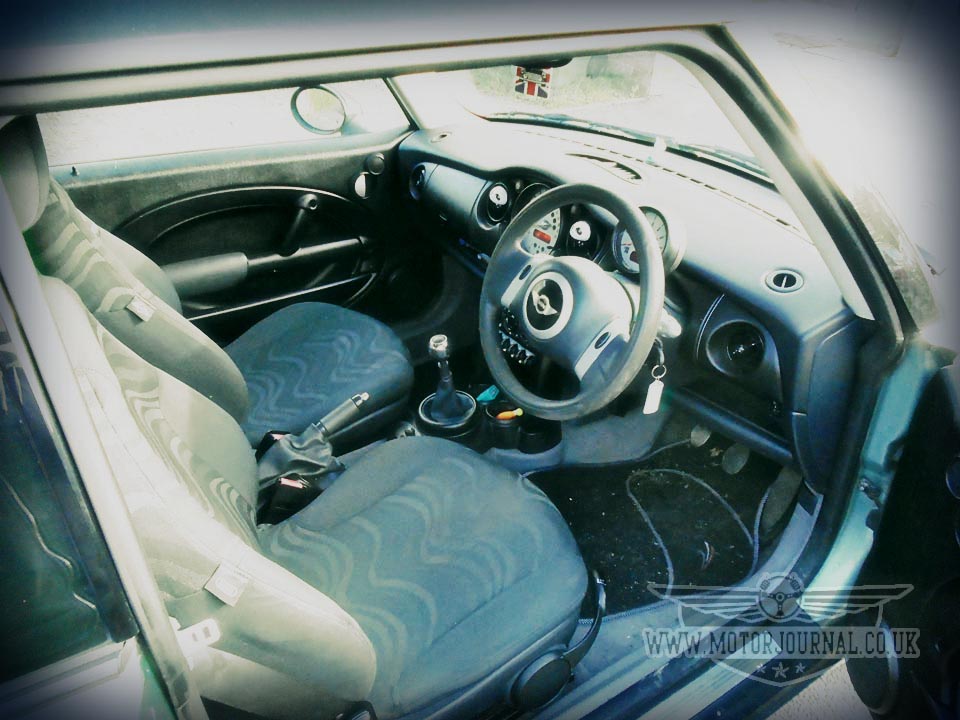 So, inside it's relatively comfortable for anything up to about 90 minutes of driving. Then after that I just don't seem to be able to get the seat in a comfortable position no matter what I do. For what it is, it's quite roomy inside too, as long as you're sitting in the front because there is next to no leg room in the back, even if you're a child! Plus, if you think you're doing a weeks shopping for a family of four and putting it in the boot, well you'd better think again! But all of this is OK because I don't sit in the back, and as a rule when we do the shopping its the Focus that gets taken! 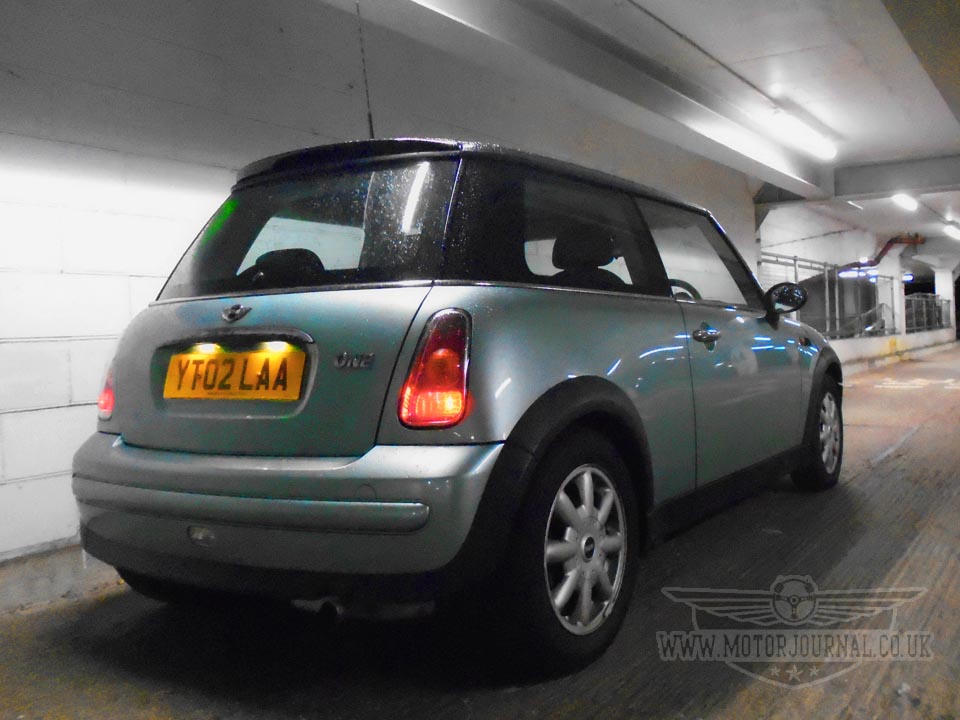 So far, unlike my original Mini I am happy with my purchase, I fit in it much better for a start! But is it a keeper? Well, not for me it isn't (is anything?), however the wife has already talked about selling the Focus (which as I'm sure you know is a dangerous thing to talk about around me!) and having this instead, so we shall see. Should she seek my opinion on it, I would personally rather keep the Focus, and thats the way I shall try to encourage her. As yet she is still to have a drive of the Mini, but my feeling is that when she does she'll probably like it, but not as much as she likes the Focus... Hopefully! For me at least, it will be one of those cars that after I'm done with it, it will be out of my system, crossed off the list, and done with. Although I wouldn't rule out one of those Mini estates, or the little two seater convertible thingy either! But as for the Mini One, I think that as much as I do like it, it's far too common for me to really want to hang on to it, a point that has become very clear on the school run just lately... My littlest Monster plays a game called 'Mini-punch', the object of the game it that every time one of us sees a Mini, the first one to see it says 'Mini-punch!' and then punches the other person in the arm! I am getting well and truly beaten up on the school run! Therefore, I have introduced a similar game that my brothers and I played as kids called 'Bug-slug', I'm sure you know where this is heading, but incase you're unsure of the rules, every time one of us sees a VW Beetle, the one that sees it first says 'Bug-slug!' and then punches the other player in the arm! Well, I figured that like the Mini One, these newer retro styled Beetles are everywhere, and as they came out around three years before the new Mini. However on our ten minute or so school run in the morning it would appear that the Mini One outnumbers the new Beetle by about 17-1!! My arm is so bruised it unreal, I'm just glad we've not invented a game that involves getting punched in the arm every time we see a Fiat 500!