November 28, 2017
To continue my current theme of rusting abandonned vehicles that are currently in my care, I bring you a Ford Mk2 Escort van! 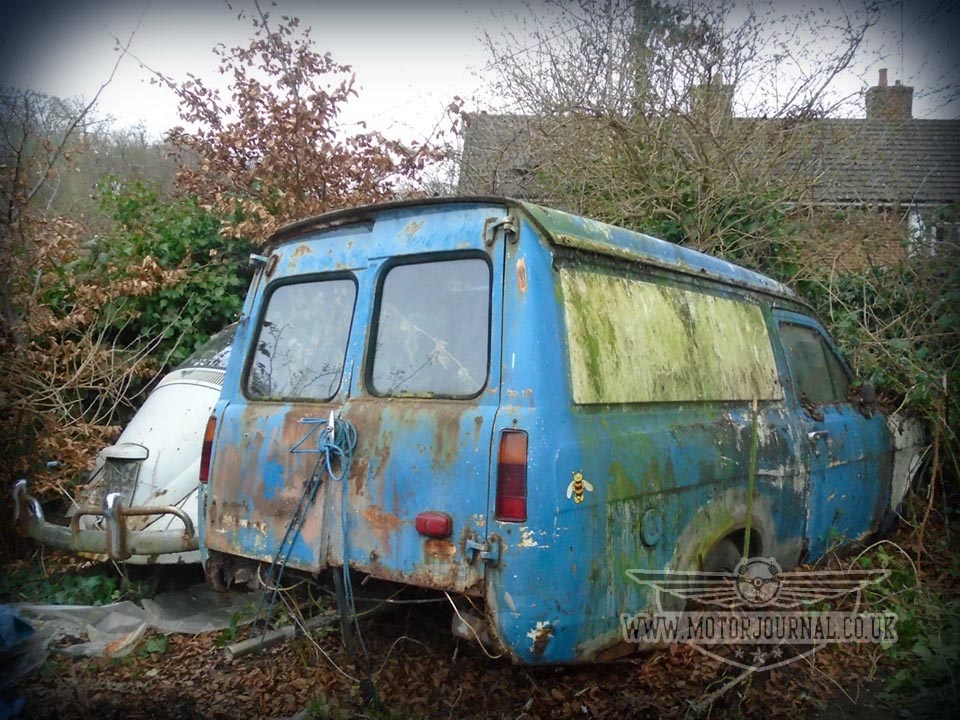 Believe it or not I am really trying to talk more about my fleet that is in good working order, and can be driven, rather than my fleet of rusty crap! But at the moment it's my fleet of rusty crap that is needing attention, and so that is what I will be telling you about for the time being! Much like the previously mentioned VW Beetle (that can be seen just peeking out from behind the van, Episode 11 I think) This doesn't actually belong to me either, it also belongs to my Brother. However, this particular Escort was actually one of the first vans I had when I started working at a company called H.G. Bruce and Partners Ltd, and dare I say it, this is now in worse condition than my mk5 Escort van that I was driving when I finished working at H.G. Bruce and Partners Ltd over 25 years later! When I started working there I was in quite a privalidged position, you see I was just a labourer, or as we were known back then, Pipefitters Mate. My job was to assist the qualified Pipefitters in any way they needed, and as I wasn't a Pipefitter I was not entitled to a van. Myself and the other labourers all either had to get ourselves to site, or travel with the Pipefitters, often in the back of a van sitting very uncomfortably on toolboxes, pipes, and fittings. This was ok if you were just working around the corner, but not very nice if the site was a couple of hours drive away! However, there was this one Pipefitter who couldn't drive, so it was a case of first one of you labourers to get a licence gets a van! Just ten lessons, but three tests later I was the chosen one! From then on I was driving my Pipefitter around in amoungst other things, this Escort van. I bought this off the company in about 1990. I continued to drive it around for a bit, until it ran out of MOT as I remember, then my Brother decided that he wanted it for his first car, so he had it. Put a lot of work into getting it through the MOT. Then he drove it around until the mid to late nineties, then he got involved with other stuff, so parked it up with the idea of fixing it up later. So after the Beetle-ectomy, what does the Escort look like? Well... 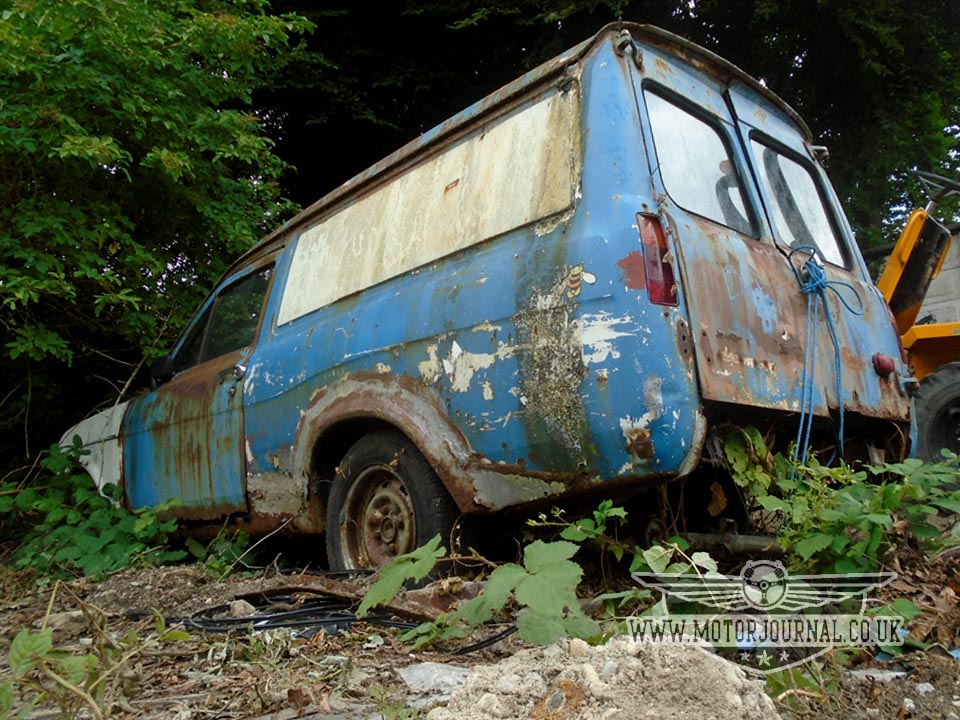 To say that it's pretty bad would probably be the understatement of the century, and condition wise my Carlton looks factory fresh in comparisson! While we're here I guess we just as well have a few close ups of the rust,  erm, patina! So starting at the top, the roof... 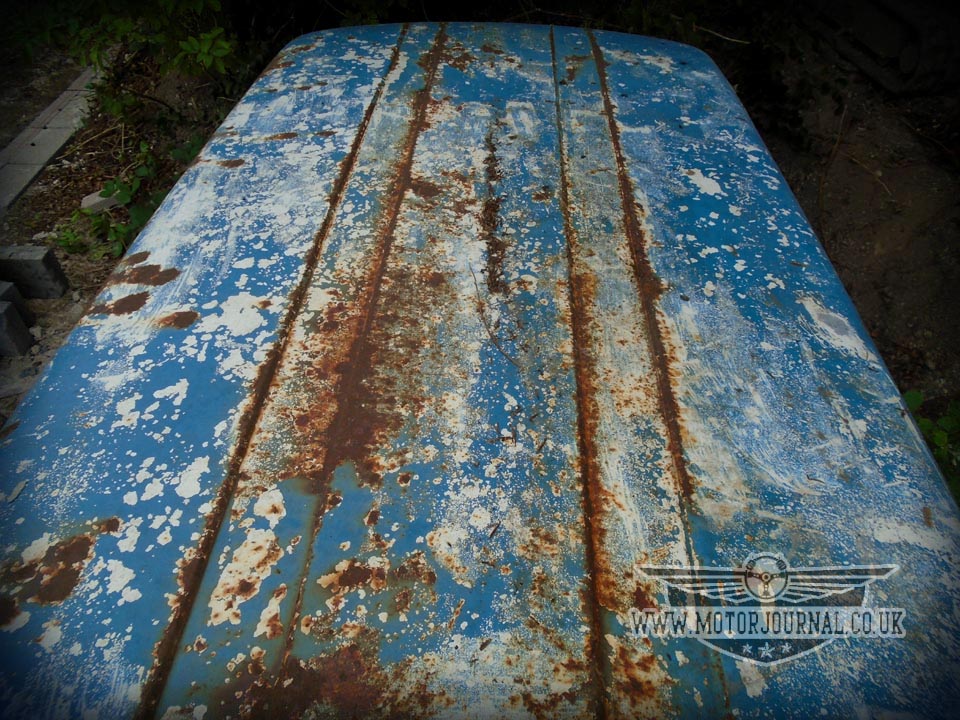 Its fair to say that the roof, despite having a good smattering of rust is fairly solid, which I think is good, as you've got to have something solid to start welding the rest of the van on to! It's also nice to know that the Ford Tractor blue paint that I brushed on there back in the Summer of 1989 is still holding up well! 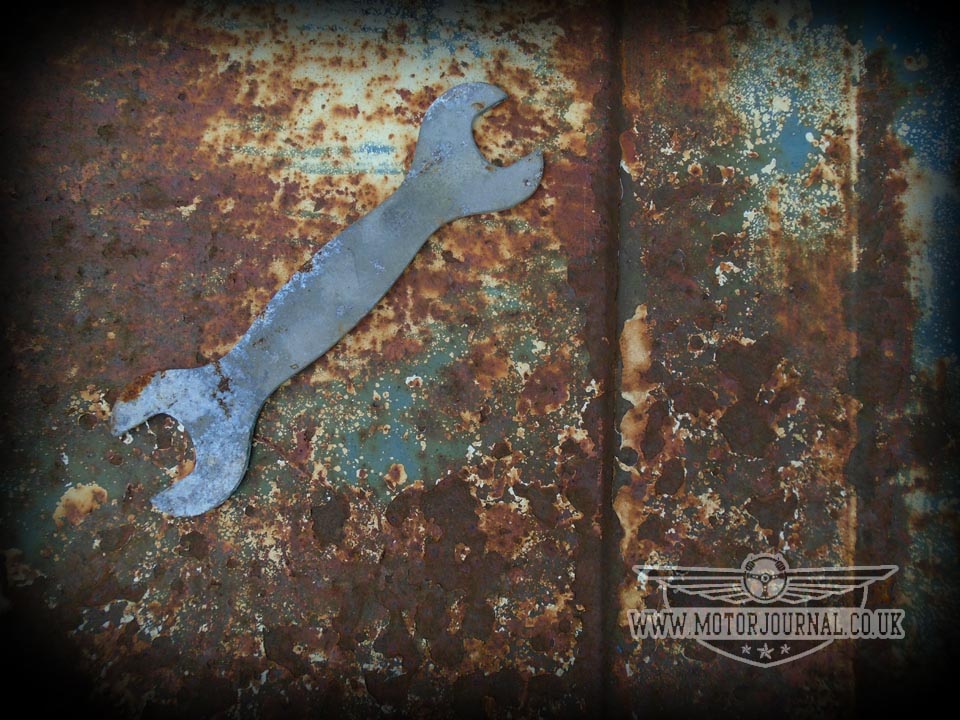 I wonder who left that cheap old spanner on the roof? It certainly wouldn't be me as I'd never own such a cheap-ass tool! But somehow it's managed to bond itself to the roof quite nicely! 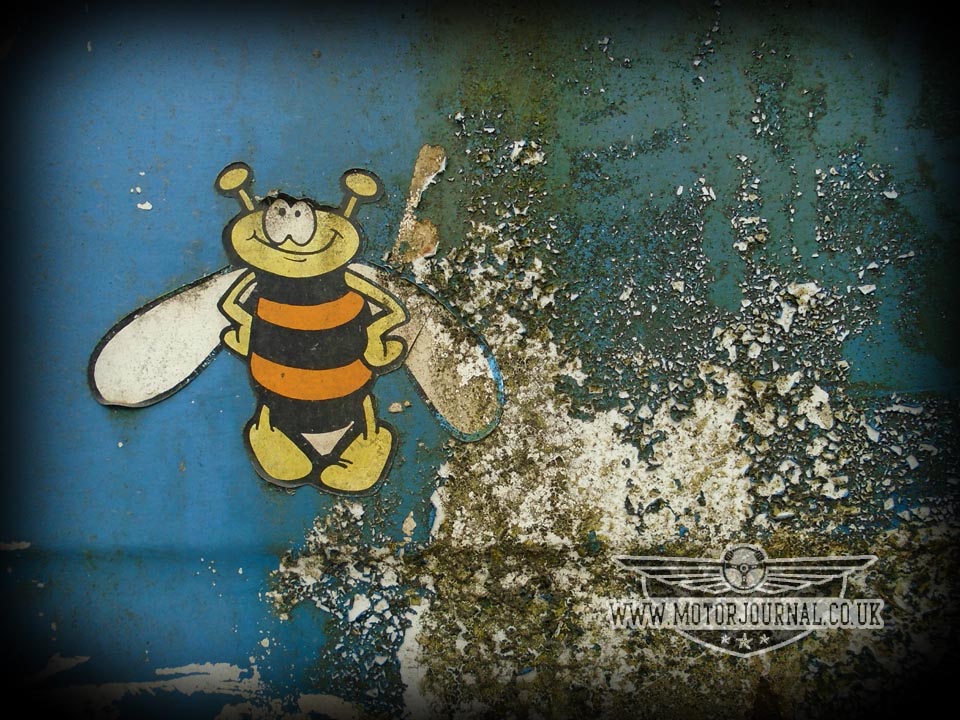 The Bee, I'm not too sure what this was about, perhaps some sort of homage to the Bee decal on the side of a Dodge Super Bee? I dunno, but I remember shortly after painting it back in 1989 I saw this sticker in Les Smith Autocenter and bought it to put on my freshly painted van. Apparently as I remember it wasn't in keeping with the look the company was going for, and I was supposed to take it off... I never got around to it! Still, it must've been quite a high quality sticker, it's nearly thirty years old, and holding up quite well! I've got to wonder if my own 'MOTORJOURNAL' decals will hold up quite so well? 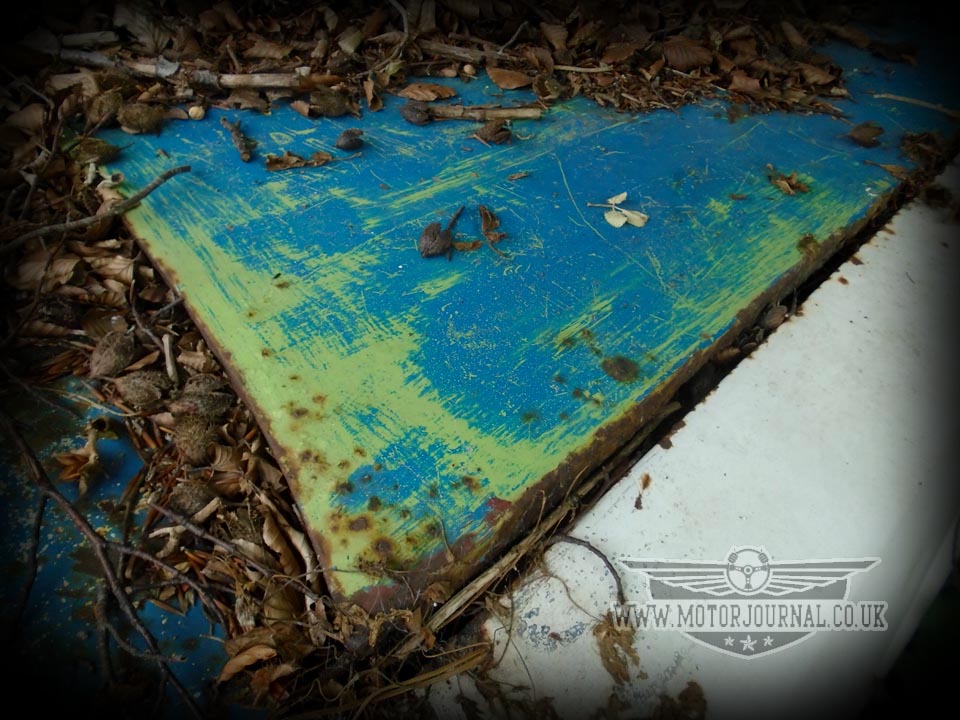 The bonnet, well at some point that was green! However having Beach nut shells and leaves sitting on it keeping it damp for years on end has done nothing to preserve the steel construction of the bonnet. However, it's not so much the top, but the frame underneath that has rotted away! 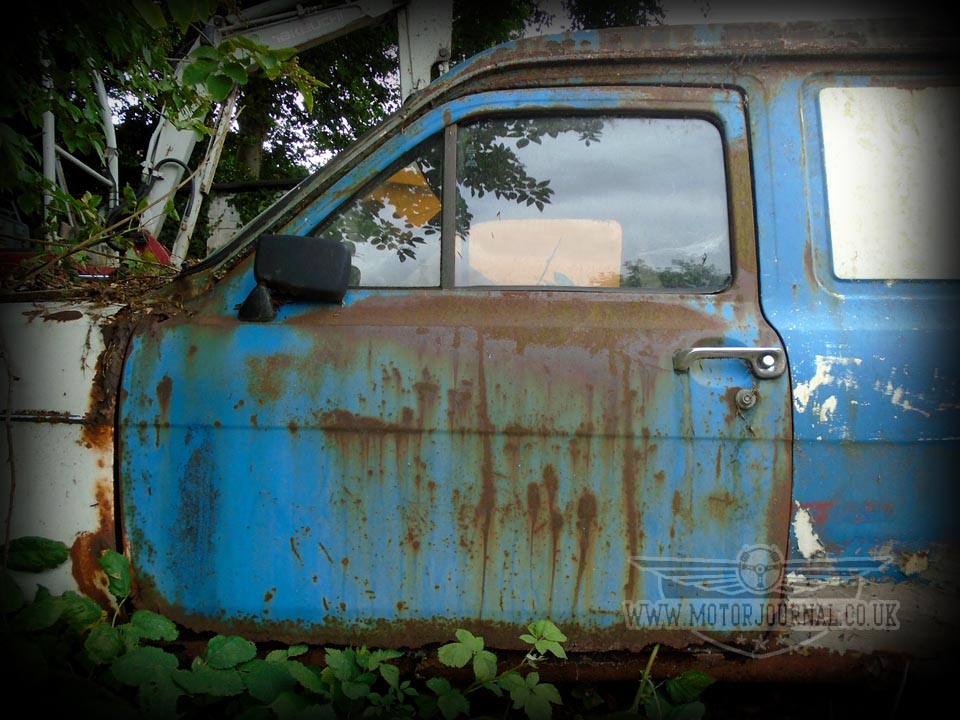 The doors, no, I'm not talking about Jim Morrison and his mates! These are pretty frilly around the bottom, and they may well be frilly inside too! 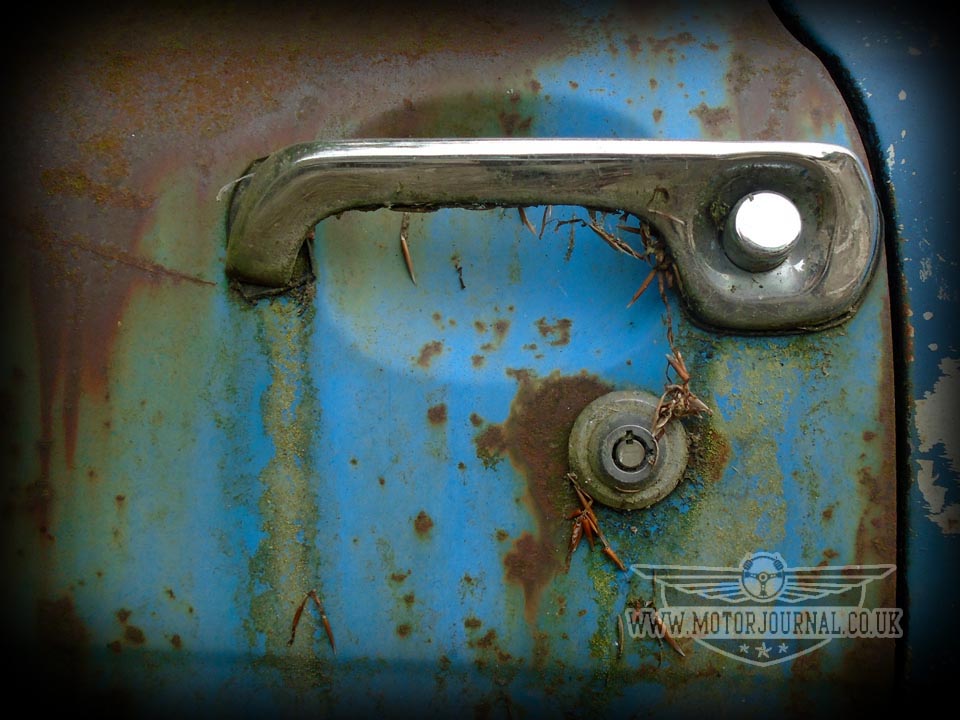 However the high security (in the nineties!) locks still work as do the door handles, but the doors will not open because I think where it is so rusty the shell is starting to collapse and it's only the fact that the doors are shut in the opening that has stopped it folding in on its self! 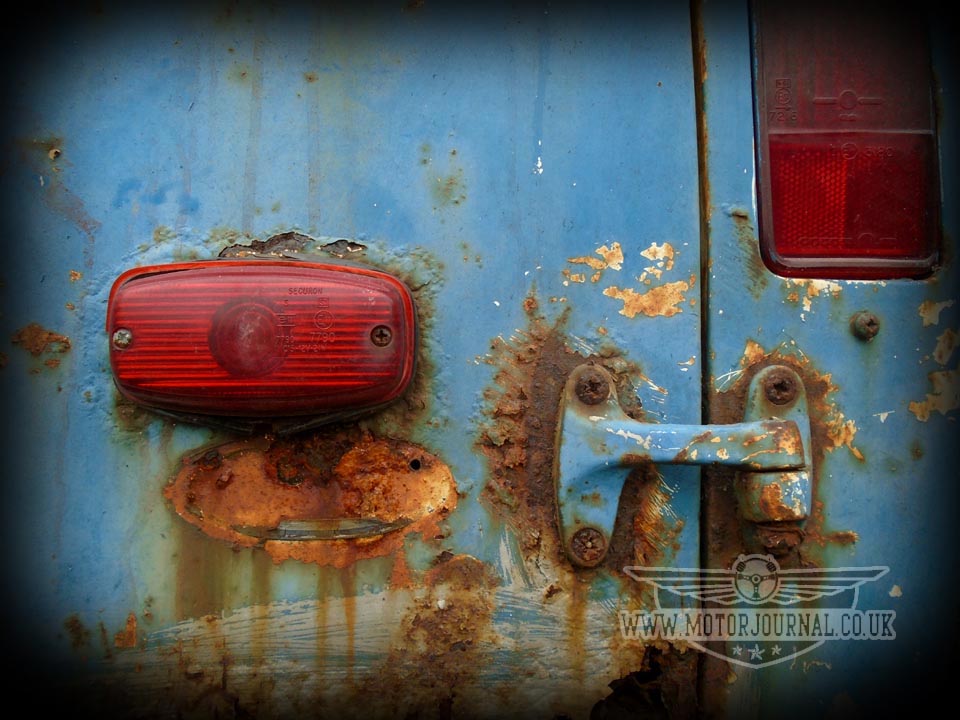 The back doors are much like the rest of the van... Pretty shot! although they dont look too bad inside! Plus, as an added bonus they actually do still open, so atleast we should be able to gain access to the insde of the van if and when my Brother ever gets around to moving it! 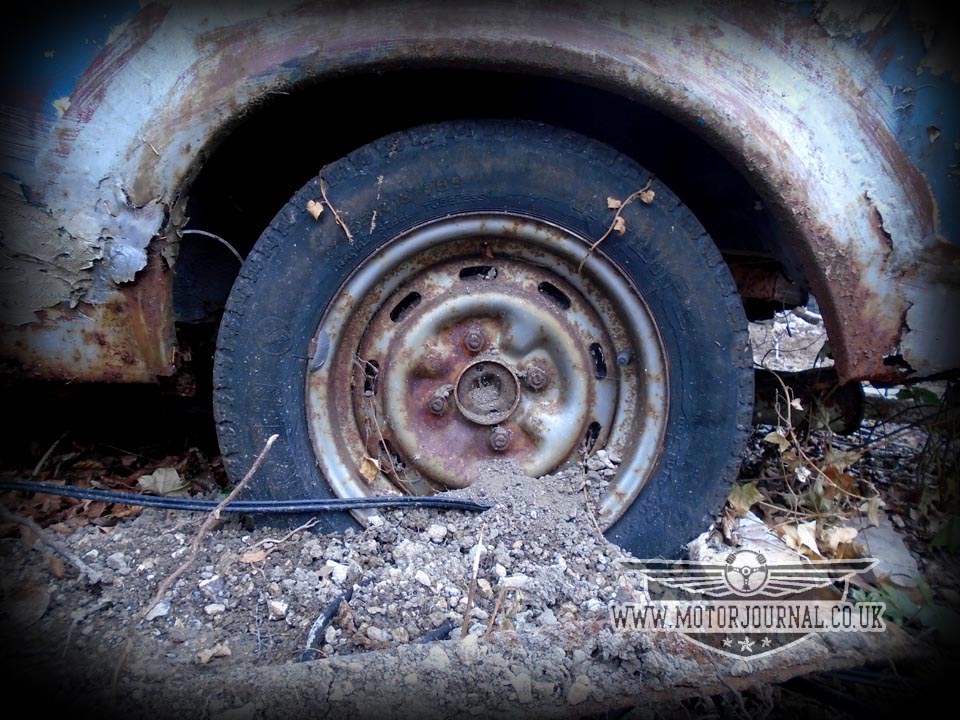 The wheels are ok, and the tyres are sort of holding air, or atleast, they'll probably hold it long enough to move it. Not sure as yet if they rotate, but to me, at the moment the rear wheels don't look like they're in the right place in the arch, they almost look like they're steering! 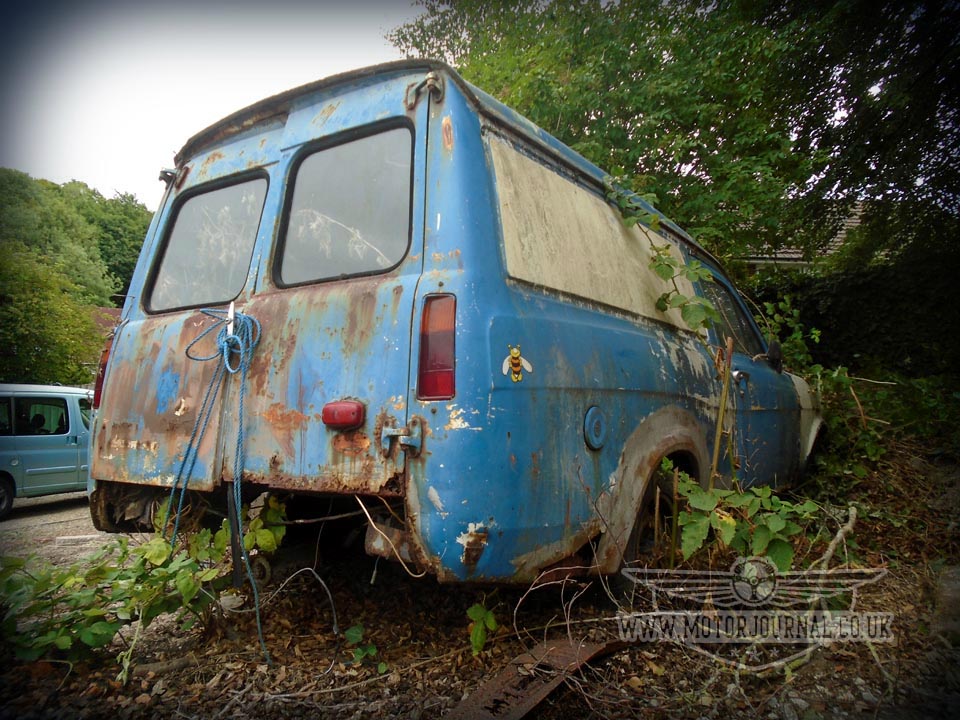 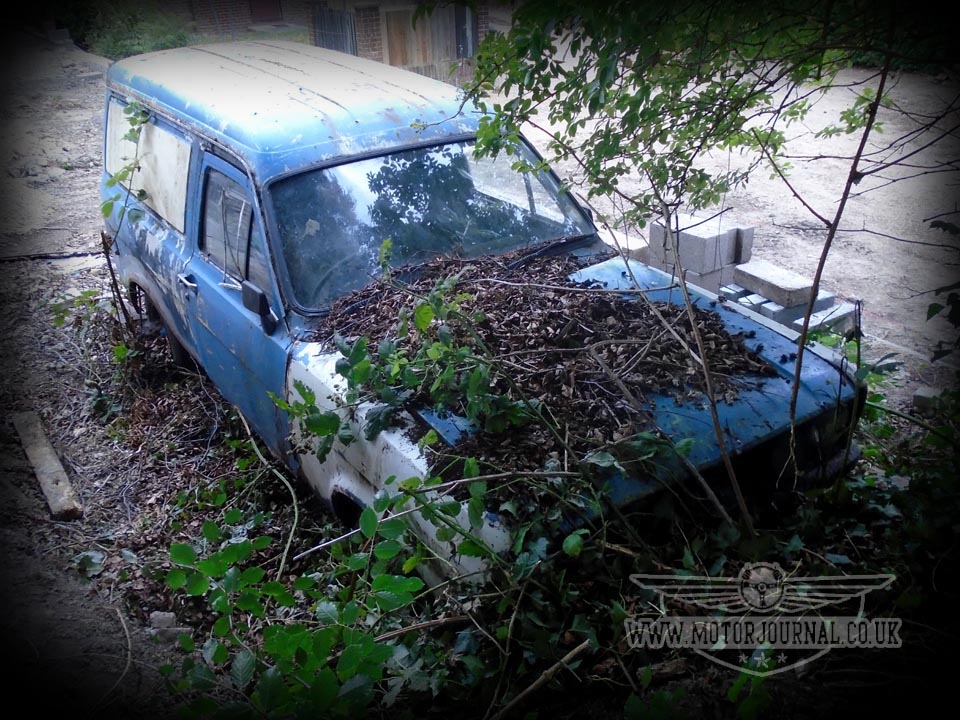 As you can see, it's been sitting there a while, and it still patiently waits. I really don't know what he's going to do with it, but it needs to be moved soon, and my feeling is that when we try to move it, it will probably break in half! Also, as rusty as this looks, I would think that it's far FAR worse, however a better appraisal will be made once we've dug it out of the undergrowth. Then we should be able to see just how bad the rust is. I think that we shall probably find that we need quite a lot of fabrication work on the floor, as I think this will be pretty much non-existant! Time will tell, and I thought my Carlton was bad! 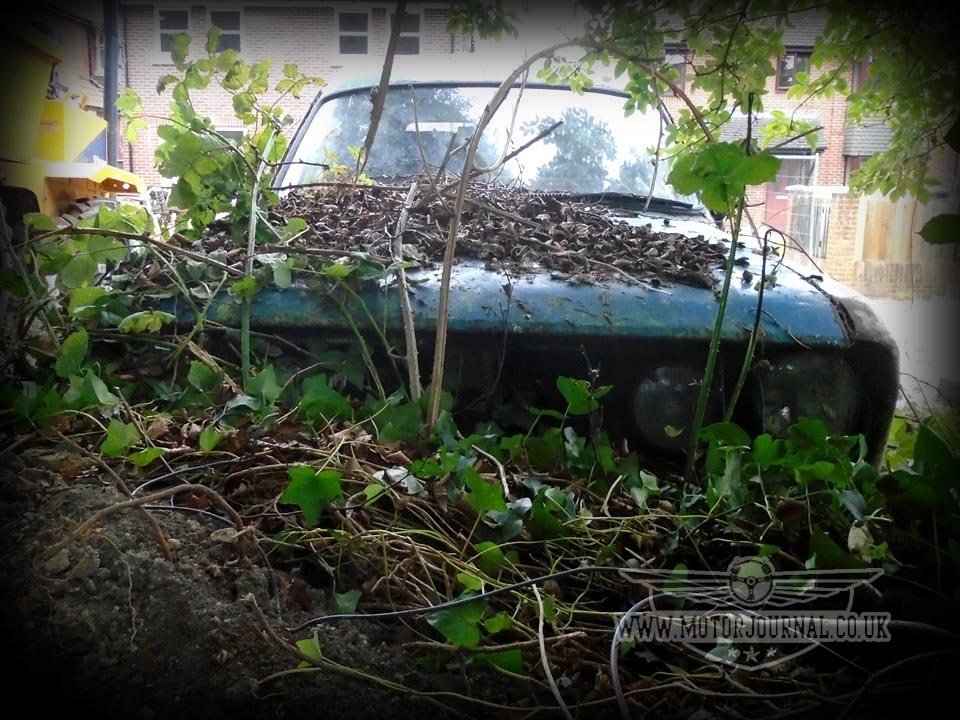