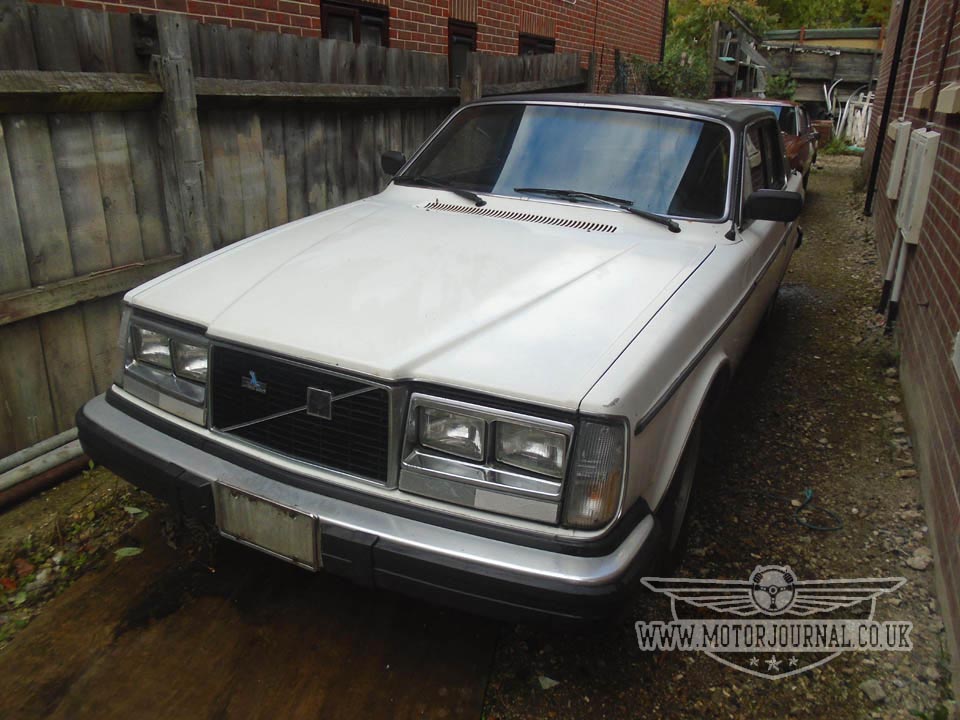 As I said before, I still have a love/hate relationship with this thing, and as I also said before it's through no fault of its own. But I really didn't want to get rid of it, because if I got rid of it, when will I be able to find, and another one, and even if I could, would I be able to afford it? That is, if I ever did decide to love one again! But I had lost my storage where the Volvo was being kept, and so against my better judgement I had decided to sell it! I half-heartedly advertised it still unregistered, still not loving it, but still unsure if I should be selling it. I have driven it (on private roads) but the struggle it was to get it to me in the first place hadn't faded from my memory in the three years I have owned it, and so stupidly I just thought it was time to let it go! So I put the word out that I had a very solid Volvo 262c up for grabs. After  a few weeks of nothing, eventually somebody wanted to know more about it, we arranged a date, and this chap comes and look at my Volvo 262c to buy it. He asked me what I was prepared to take for it? I said £2500. He thought about it for a while and scratched his chin a lot as he gave the 262c a good looking over. After a little while he finally said will you take £2000? I told him that I needed £2500 as thats what it had cost me. So we talked a little longer and he seemed very interested, so I asked him what his plans for it were, is he going to lightly restore it or what? He said that he wasn't planning to restore it, he was planning to race it! So I said, oh what like classic, or vintage car racing or something? He replied, no, nothnig like that, I want to use it for banger racing! I said what? He said, classic banger racing!! So I said let me get this straight, you're going to pay £2500 for a car that you're just going to smash up banger racing? He said, no, his sponsors buy the car then stick their stickers all over it, and then he goes banger racing in it. He reckoned he'd probably get three maybe four meets out of the Volvo and this is good value for money! Now, to qoute the yoof of today, "WT actual F?!" He then showed me his farcebook page, and he's been doing it for a while, he showed me old Jags, Cortinas, Granadas, Carltons (annoyingly) Zephyrs, Zodiacs, and even a 1957 Chevy which by all accounts he paid £8000 for, just to go to an all american classic banger meet!! 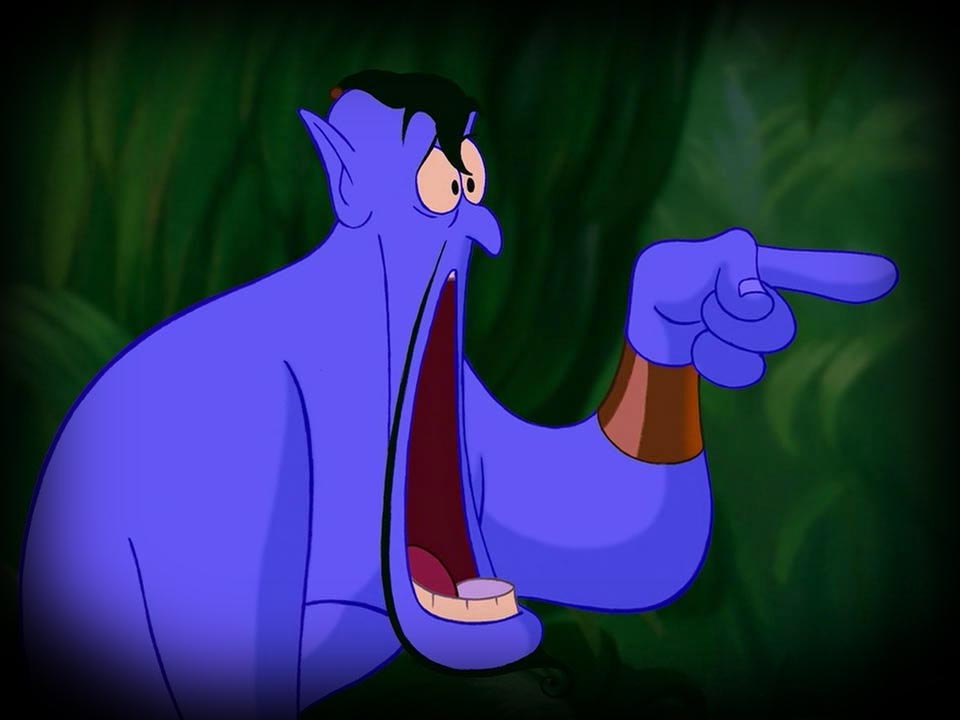 My jaw hit the floor!! I genuinely can't get my head around the idea of banger racing even with some old heap of rusty doggy doo-doo, but I really struggle with the idea of spending thousands of pounds on a car just to smash it up? Anyhoo, needless to say that once he'd told me his plans for my 262c, it wasn't for sale to him at any price, this suddenly put a different spin on things, and I must confess that I did become inspired to get it MOT'd, registered, and drive it. A quick phone call and before long my 262c was dragged out into the street, a battery was put on it, and a couple of quick blasts of Easy Start and its 2.7 litre V6 engine was purring away happily. 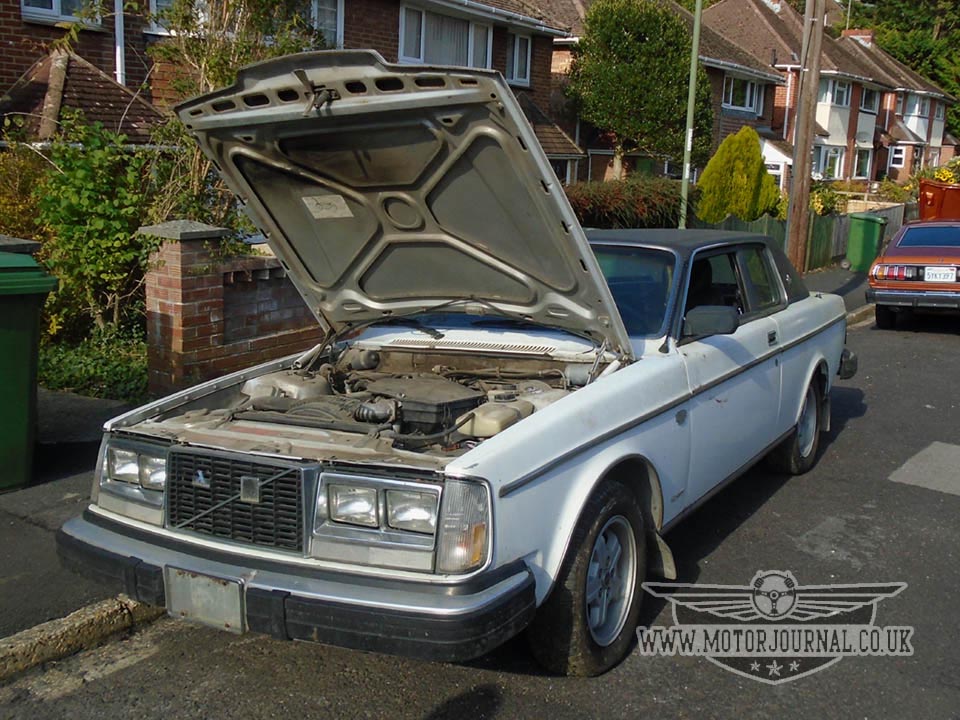 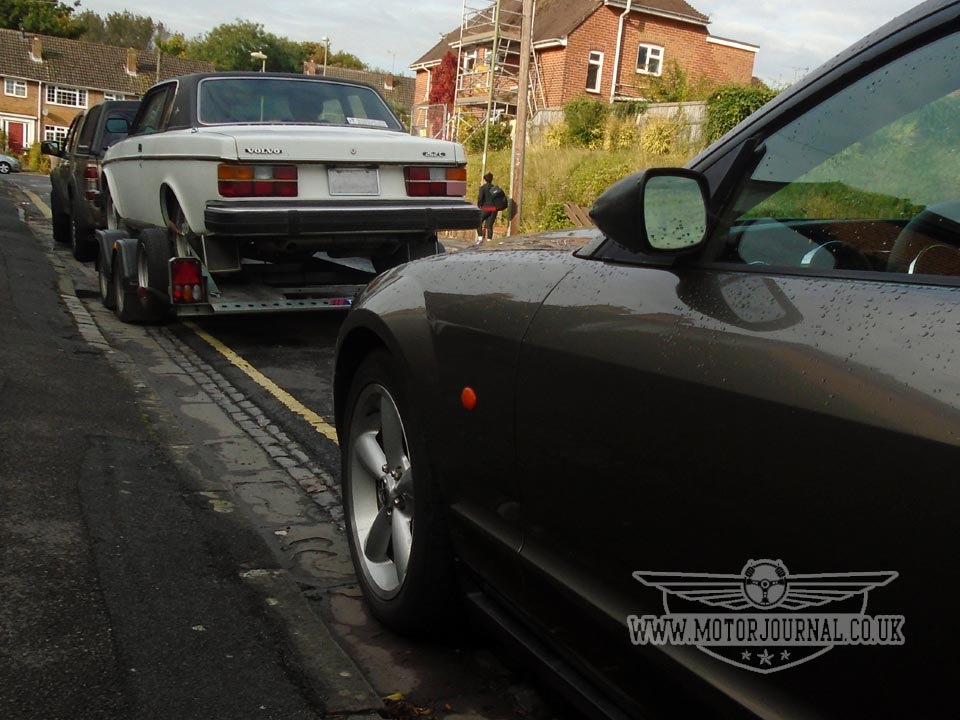 Point the nose of the trailer draggin' Chev-suzu at Coltech Classics for some remedial work prior to it's MOT, and lets go! Over three years from the day from when I bought it the Volvo was finally failing it's first MOT in the UK! Thankfully it didn't fail on too much and as it was already at Coltech Classics, I just had my friend Paul recitfy the problems, and get it re-tested! It's second test was a far happier pass. Albeit with a couple of minor advisories, well, it's a 1978 car, it's never going to get a clean sheet now is it? I was happy with that, so once again I was headed down to Coltech Classics dragging a trailer behind me. Traditionally this tends to turn into a mad dash as I have to get back to pick up my little monsters from skool... But not this day, this day they had an 'insect day' I'm sure it's an inset day, but my littlest monster insists it's insect! As, as she says, "What kind of a word is inset? That's a rubbish made up word!" Well, I'm not going to argue with her because lets face it, she's a little woman, and as I'm sure most of you fellas out there know, you can't win no matter what you say! 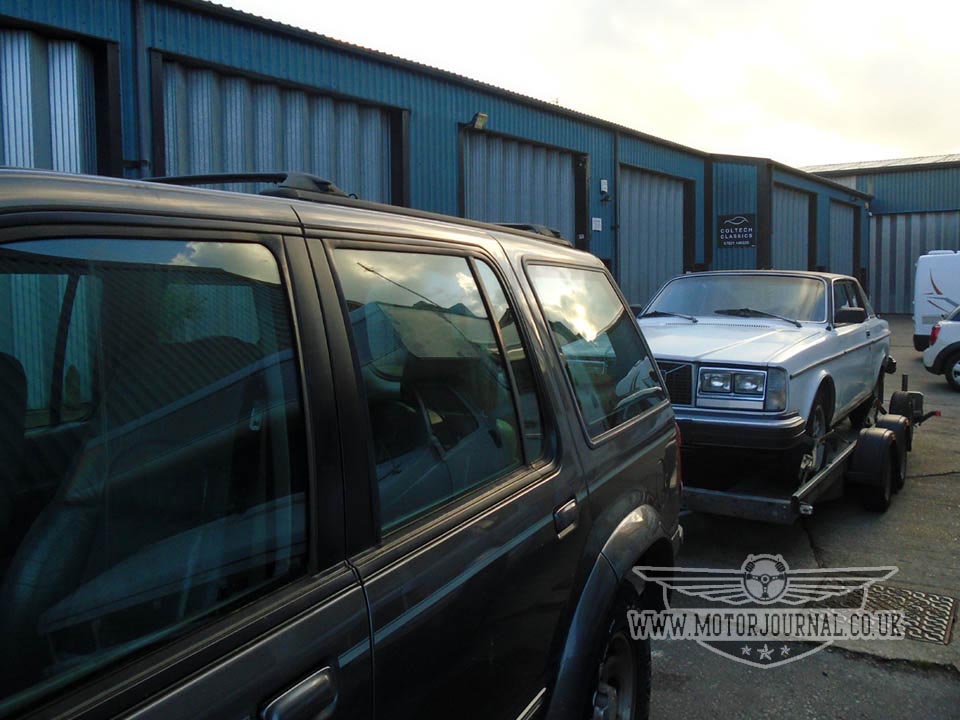 I had Paul do a few other odd jobs while he had the car, mostly lowering the height of the seats in the front as they were too high, I'm guessing the previous owner was a dwarf or something, and needed the extra height to see over the dash, but me, at a towering 5' 10" was rubbing what is left of my hair off my head on the head lining! I must admit, that after the shock of the banger racer, I did feel a bit different about the old thing. Plus, now it was MOT'd and I have had a run around the block in it with it's lowered seat I was starting to feel the love for it again a bit. The plan was then to fill in the V55/5 form to register it, then drive it. But in there lies a bit of a hitch. I bought, and imported this car before the NOVA system was implied. The Notification Of Vehicle Arrivals is a notification which must be made to H.M. Revenue & Customs when any new or used land vehicle is brought permanently into the UK. The notification will contain information about the person making the notification, the purchaser, owner, or the supplier if from outside the EU the import entry and the vehicle itself. NOVA will check the information provided in order to determine whether VAT is due, verify the declared value of vehicles or compare the import entry details provided against information held on other HMRC systems. Once the notification has been successfully processed by HMRC, the customer will then be given a number, and  informed that they can apply to register and license the vehicle with the DVLA. When such an application is received, the DVLA will use the NOVA number to check that a notification has been made and processed by, HMRC for that vehicle. If the check fails, the DVLA will refuse the application and notify HMRC. The problem is that even though I brought the Volvo in before this system was in place, I still need this NOVA number to be able to register the car. I have tried several times to call the DVLA about getting a NOVA number, but oddly nobody there seems to know how I can go about getting one when I didn't have one in the first place. Infact one person I spoke to said that he can't look into it without my NOVA number!? Idiot! He also suggested calling back when I had it so that he could find my file! So almost one year later the Volvo is still unregistered, it's nearly out of MOT, and I still havn't really driven it! I must admit I have been a bit slack. After trying several times without success to get a NOVA number I kinda gave up. So now I really need to get my act together, get the NOVA number, get it re-MOT'd, and get driving the thing! Atleast its now stored in a dry workshop!